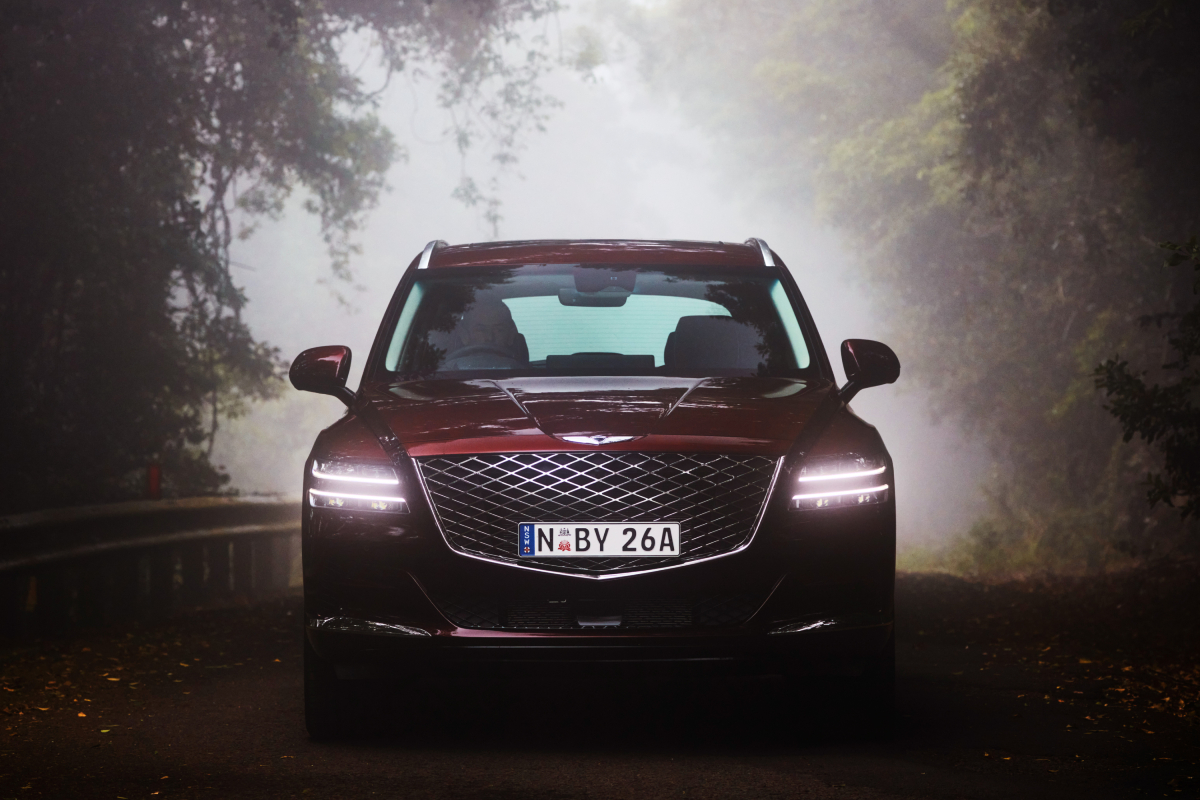 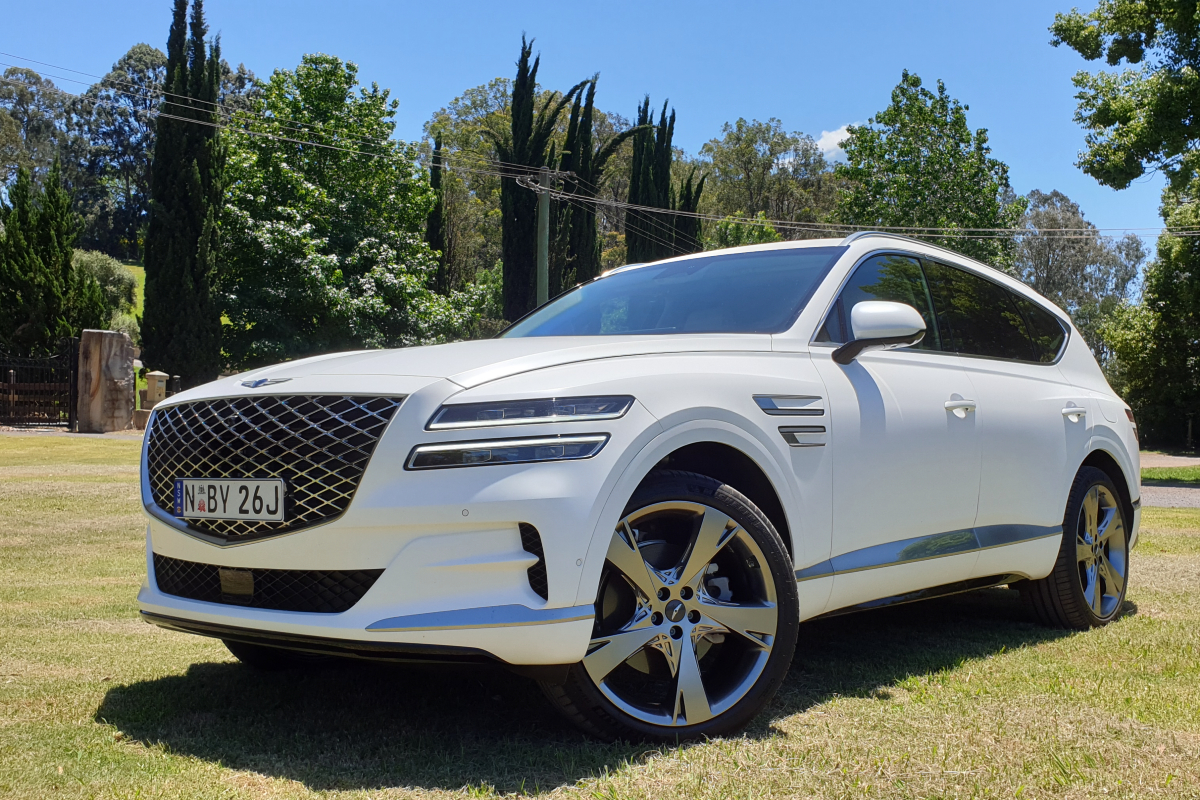 Genesis has undergone a rebirth of sorts in recent months.

From a lone luxury sedan offering at the brand’s launch five years ago to a pair of sedans and a pair of SUVs in various trim levels, the growth has been remarkable.

GV80 is the moniker that Hyundai’s luxury offshoot has given to the first of its SUVs and it’s important to note that, unlike competitors from Germany, they haven’t (as yet) flooded their range with vehicles from A to Z.

The GV80 is a large car. There are two petrol and one diesel option, and we tested the 3.0-litre diesel and AWD combination. 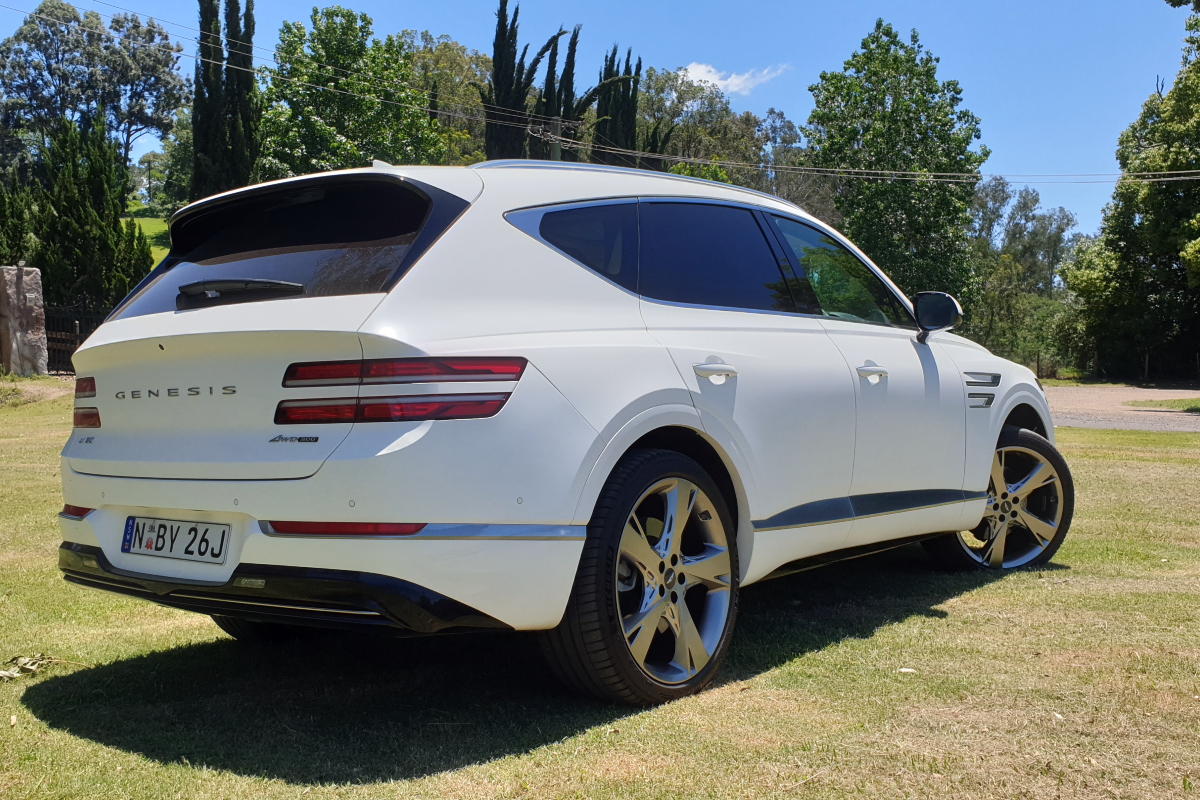 Genesis has a fixed price system now, so haggling is non-negotiable — as in they won’t.

There is a Luxury Pack at $10K and it was fitted to our review car.

It’s worth it, quite simply.

There is Remote Smart Parking Assist (RSPA), via Smart Key, including perpendicular and parallel reverse parking plus forward/reverse parking functions.

Keeping things quiet is an active noise cancellation system and you’ll never know how good it works until you get into another car.

With the third row folded, there’s 727 litres of space. Folded that jumps to a massive 2144 litres.

That’s just a smattering of what’s available. Suffice to say there are plenty more features to like.

The exterior is different, with the front and rear lights a pair of horizontal lines lit by LEDs.

It’s a striking looking thing, especially from the front, with the standout Genesis shield grille.

The rear window line is also distinctive, with a solid pyramid-shape bracketing the powered rear door.

During our tenure, it caught many an eye, with some actually coming up to the car and asking us what it was.

A minor downside, one person thought it was from Germany, a brand known for a certain two door sportscar with several decades of heritage.

It’s a big machine, with a length of just under five metres and a dry weight of around 2300kg.

The fact that it drives as well as it does highlights the potency of the engine.

Inside, and also part of the Luxury Pack, is a driver’s display that, when the attention sensor reads eyes forward, goes to a pseudo, yet wholly effective 3D effect.

It starts as flat, 2D and utterly gorgeous looking display, before blinking and somehow providing a true and visible depth to the look.

It’s electrickery at its best.

It’s not all great news inside; the ultrawide touchscreen is set too far back and means you need to stretch.

It also blocks the centre speaker’s delivery. Oh, and in the doors, the speakers here (tweeter and mid-range) fire directly into the driver and passenger’s legs, rather than being mounted in the A-pillar (tweeter) and angled better for mid-range.

The white leather, stitched in a quilted pattern, may also not be to everyone’s taste. Kids, dogs, shopping . . . life . . . will be highlighted, with dirt and marks more visible.

Blind Spot Collision Avoidance, Lane Change Oncoming and Lane Change Side (which uses cameras to display an image in the driver’s dial display in the binnacle), Lane Keep Assist-Line Road/Edge, and of course plenty of airbags make it a package to ease concerns. 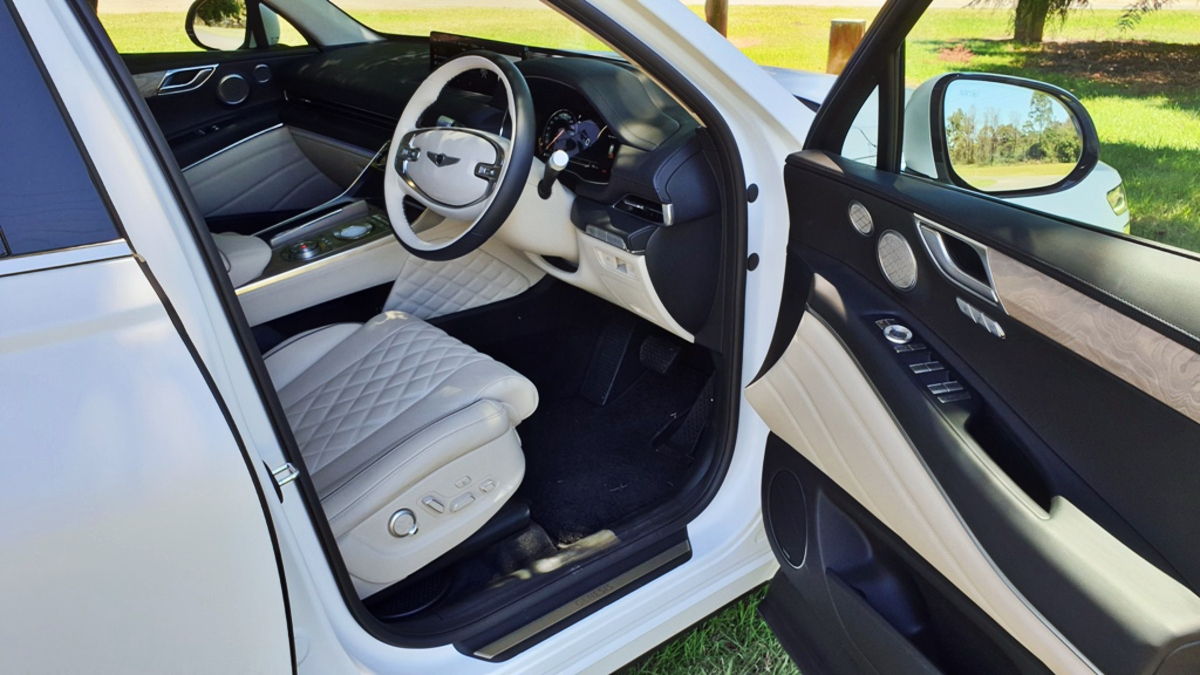 An 8-speed auto takes 588Nm of torque and spreads it between all four paws for superb grip, with the rear having an electronically controlled limited slip differential or e-LSD (which sounds a bit illegal).

It’s quicker than seat of the pants suggests, with the dash showing numbers flying towards the legal limit far more easily than what the pucker sensor says.

It makes it an easy vehicle to drive. It can be driven as gently around town, but in the same unfussed manner eats up highways and backroads.

There are, of course, varying drive modes, with Comfort, Sport, Eco, and Custom the choices. For us, Comfort had the rear end too bouncy, while Sport held gears just that little too long.

Custom was the pick, accessed via the ultrawide touchscreen. Here you can specify Sport for the engine and transmission, Comfort for the suspension, and so on.

Because of the excellent acoustic damping, the roar from the engine is muted.

It’s a bit of a pity in one way, because there were times when the unrestrained sound from the straight six, with its surprisingly un-diesel like growl — would have been great.

The mass of the GV80 is noticeable in some cornering, but it’s also sure-footed and confident in its handling and grip — so it never comes across as unwieldy or top-heavy.

Even in the rainy period experienced, there’s plenty of footprint on the tarmac and the electronics are well able to tell the driver everything is just fine.

Braking reaches the same mark, with an intuitive feel from the moment the foot touches the pedal and stopping can be precisely calculated.

Our economy figures finished smack on 8.0L/100km from the 80-litre tank. 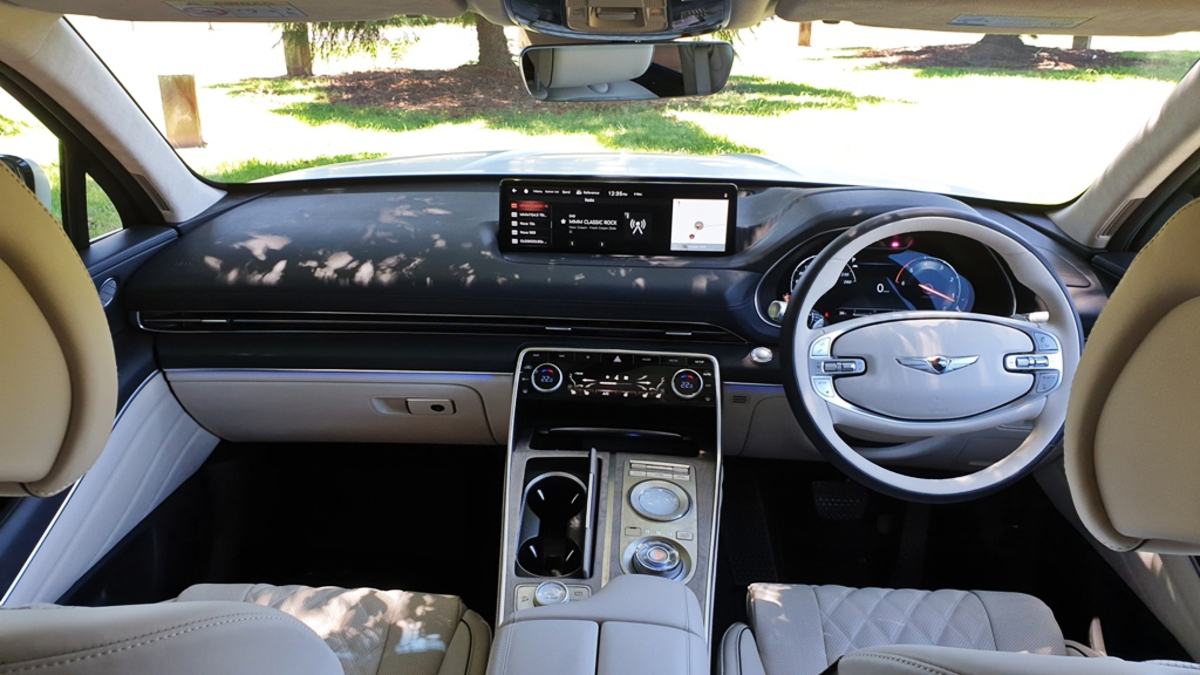 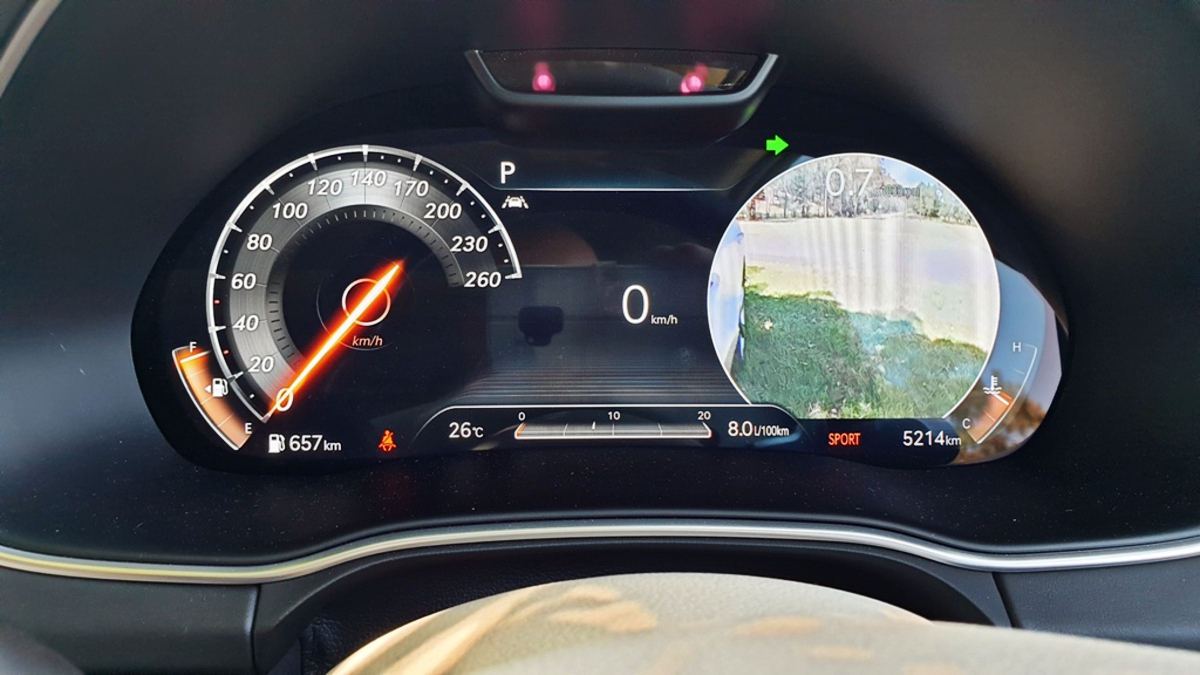 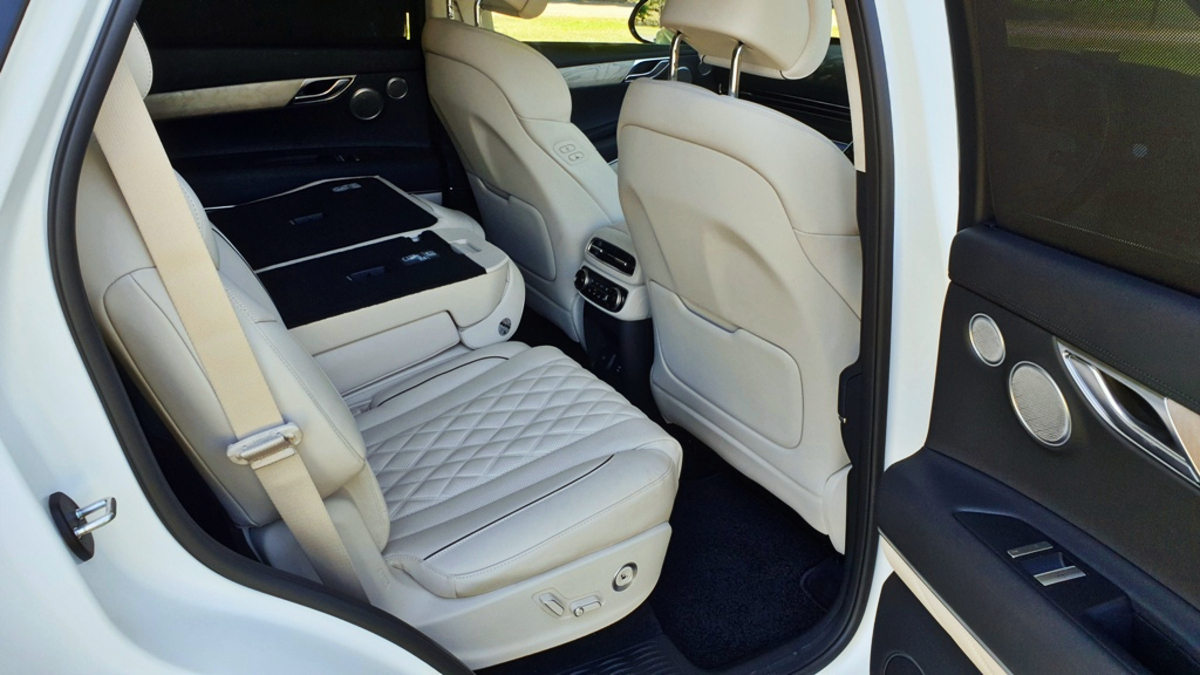 In context, because we sadly don’t get access to certain German brands that would compete against the GV80, we can only go on what we’ve experienced.

It’s a helluva vehicle, easy to drive with plenty of tech and usable functionality, and no shortage of space inside.

We loved it and it stands as a great example of what happens when a company declares its hand. 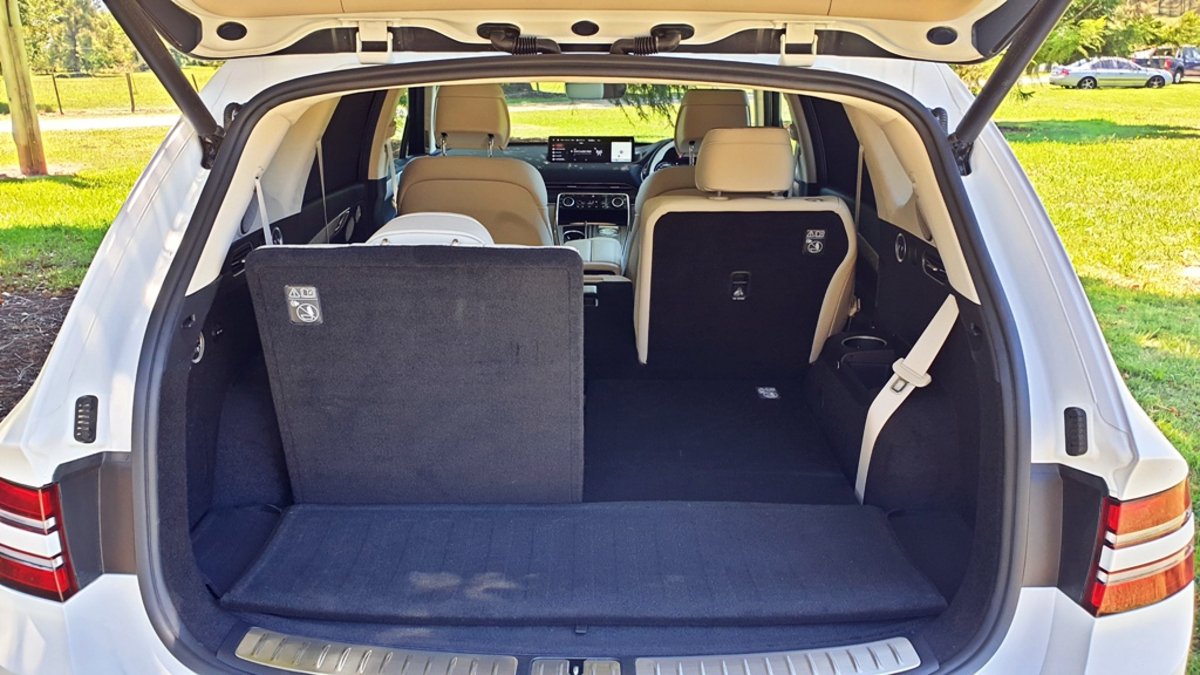 CHECKOUT: Just another Genesis . . . maybe not

Check out deals on the Genesis GV80