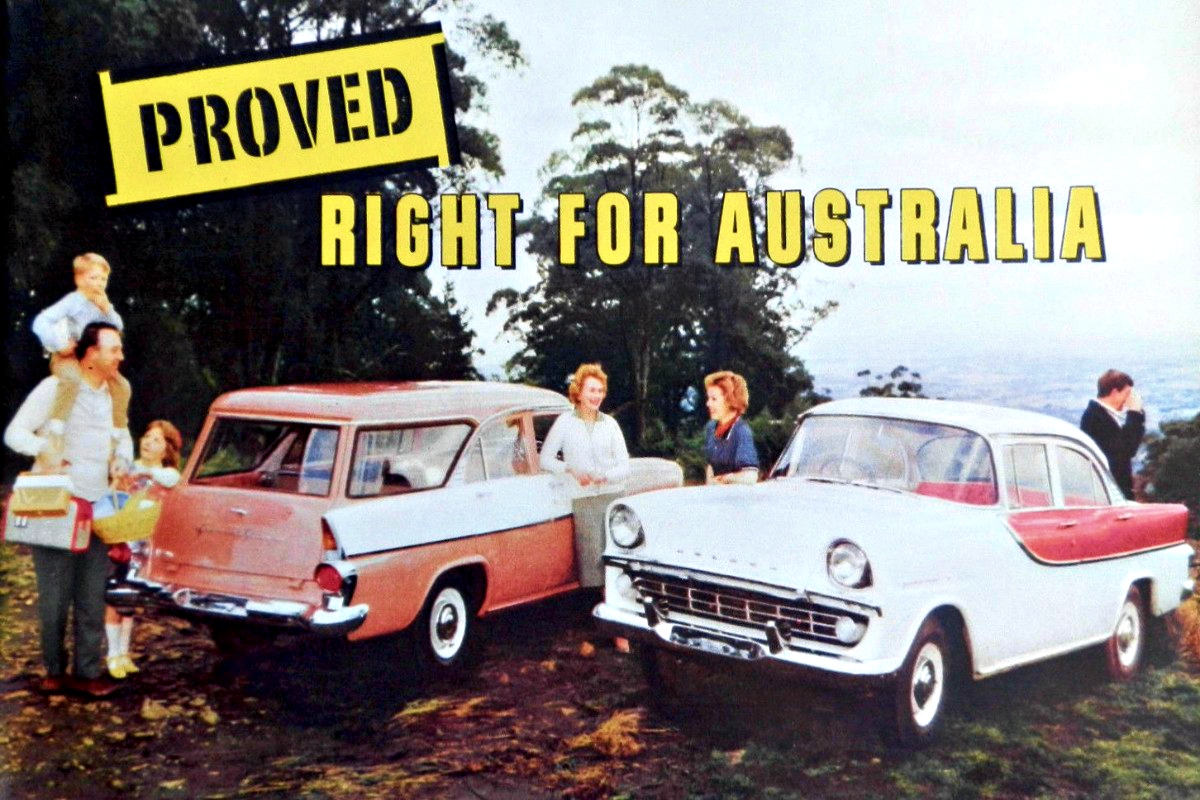 Released 60 years ago this year,  the FB Holden has polarised opinion for decades.

There are those who admire its overt Americana styling, inside and out.—the fins, the wrapped windscreen, the chrome sweep spears along the side and the chrome trimmed interior with star studded upholstery and roof liner.

On the opposite side of the discussion are those who see the FB as being too much 1955 and not enough 1960s.

They suggest it represents, in-metal, the arrogance of Holden’s senior managers who, with 50 per cent market share, thought that they could get away with slapping a heavier body, straight from General Motors’ dust bin of rejected styling ideas, over the old FE/FC underpinnings.

Critics say that Holden made no improvements to the engine, suspension and brakes and retained vacuum operated wipers.

Whatever the side of the debate you side with, the numbers tell the story.

Even though it was a 1957 Chevrolet, just 10 per cent smaller, Australians bought the FB in overwhelming preference to the sleek new Falcon, because, back in 1960, they valued its go-anywhere ruggedness.

I think the FB needs to be evaluated against the background of Holden’s commercial imperative and market success back in the day.

When the FB’s shape was first being considered in 1956, Harley Earl, GM’s boss of styling, was still in charge and setting the design trends for others to follow.

For his late Fifties and early Sixties cars, he envisioned them as having his beloved design motifs of high domed roofs, fat, doughy shapes and chrome.

And when you compare the FB Holden, 1957 Vauxhall Velox/Cresta and 1957 Opel Kapitan — all are aligned with Earl’s expectations and what he believed his 1959 American cars would look like.

In this group the FB fits right in.

The problem was that by the time the FB’s shape had been locked-in, which was in mid-1957, GM in the USA was in a panic about Chrysler’s new 1957 cars.

When GM’s design team first saw Chrysler’s low, lean and clean 1957 designs they knew the company had to make immediate and significant changes to what Earl had planned for the future.

GM’s Board agreed. They feared the company would lose market share if it persisted with Earl’s design themes.

A daring and radical decision was taken to discard the pudgy 1959 proposals and develop completely new cars for all divisions.

Earl was also about to retire, so he could do little about the change of direction.

There is no doubt that Holden executives would have discussed what was happening in the USA and thought about whether they needed to re-design the FB, against the background of the commercial and market context in which they operated.

Back in 1957, the future for Holden looked bright.

The company would reach 50 per cent market share in 1958.

It faced no real competition.

Sales were climbing year on year.

This context provided Holden’s bosses with three powerful reasons to stick with the FB and not react to developments in the USA by starting a new design.

First: the major priority for Holden was making enough cars to satisfy an increasing demand.

Ensuring they had enough cars to sell was the focus of management’s efforts.

Styling was not considered a deal breaker when a prospective buyer walked into a Holden dealership to buy a new car.

Second: there was no competitive pressure to make any change.

From a 1957 perspective Holden had no way of knowing that Ford would bring the Falcon to Australia and Chrysler would release the Valiant.

Third: Holden did not have the resources to change to a new design.

To make such a fundamental design change would have required existing body engineering work to be halted and a new work program instigated.

This would involve additional money, time and significant resources, of which there were none.

Plus, Opel and Vauxhall were not making changes, so why should Holden?

Consequently, Holden’s chief stylist, Alf Payze, and his team delivered exactly what his bosses wanted of a new Holden for 1960 — a clone of the 1957 Chevrolet, draped over the existing FE/FC mechanical.

They wanted something that was cheap and easy to manufacture.

The car needed to be rugged and reliable and carry an affordable price.

Above all, it had to make profits for Holden.

The FB Holden is what it is.

We can criticise it.