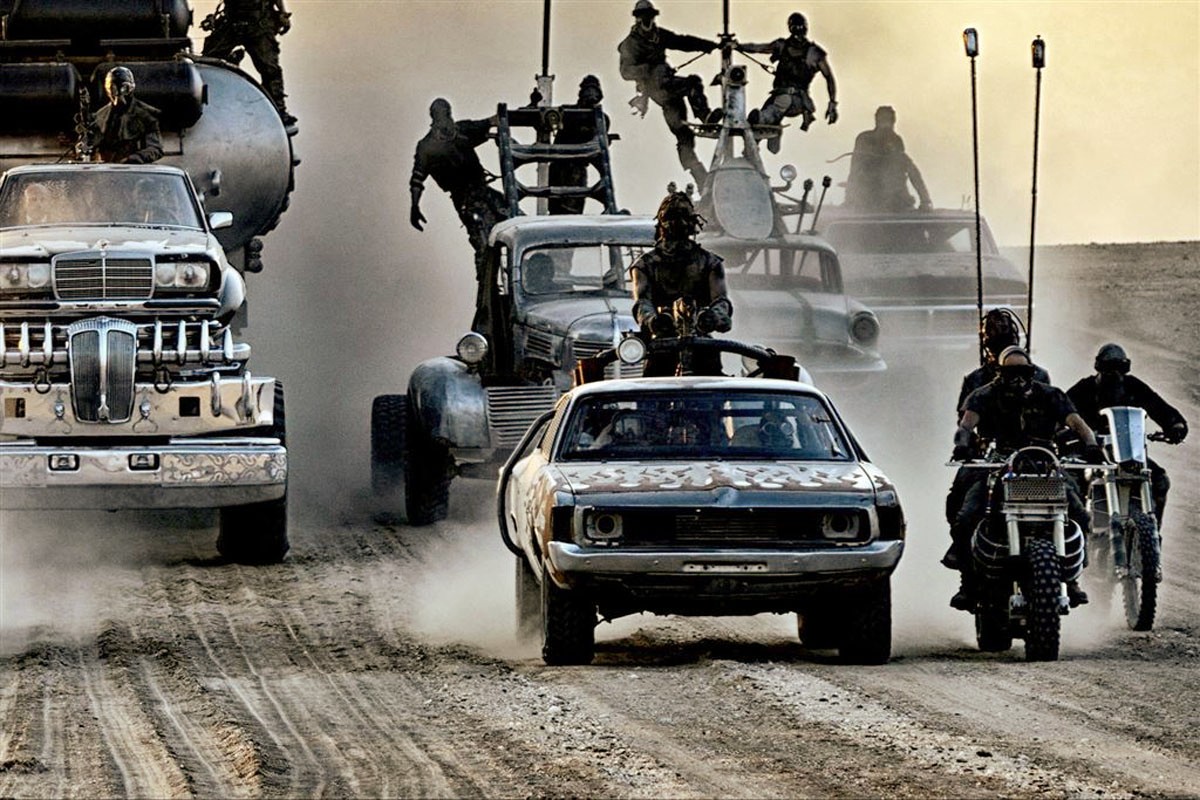 You’d have to be Mad or Max or both!

Home
Wheel life
You’d have to be Mad or Max or both!

Thinking of starting a movie museum?

Then this collection of cars from the movie Mad Max: Fury Road could be just the ticket.

Towards the end of September auctioneers Lloyds is offering 13 cars used in production of the 2015 reboot of the dystopian franchise.

In fact, Lloyds describes it as the most iconic motor vehicle collection it has ever offered and this time it won’t be an auction format — but sale by tender.

“Available for expressions of Madness is a Museum of Modern Masterpieces,” Lloyds says.

“These vehicles are survivors of the apocalypse that was the filming of Fury Road.

“Blown, super-turbocharged and armed to the teeth with weaponry and War Boys, the machines that outran the end of civilisation have been unearthed in the greatest barn-find ever recorded.

“Nitrous, noxious, and no-nonsense harbingers of hell, marking man’s uncanny ability to wring beauty, even from that designed for death and destruction, art from power, meaning from machine.”

The Mad Max sell off is part of a big, two-day Spring CARnival Grand Carmada Event includes iconic auctions of rare vehicles and collectables, prizes and giveaways, with something for everyone — slated for this September, 25 and 26.

“There has been considerable interest from all over the world, it is obviously an incredible opportunity,” Cheney said.

Mutant lovechild of semi-trailer and hot rod, twin V8s end-to-end, with six-wheel drive, this 18-wheeled leviathan was charged with the barter of fluids and firearms that binds the three city-states of the Wasteland in tenuous alliance.

She (and ‘she’ she most definitely is) bestrides the Fury Road, a beast of war as much a beast of burden, piloted by the most trusted warrior and heralded driver of the Citadel, Furiosa.

A dozen elite War Boys hunker down on the truck and trailers of this massive machine and a convoy of cars and motorbikes track with her across the desert, a finger to the apocalypse and the downfall of man. 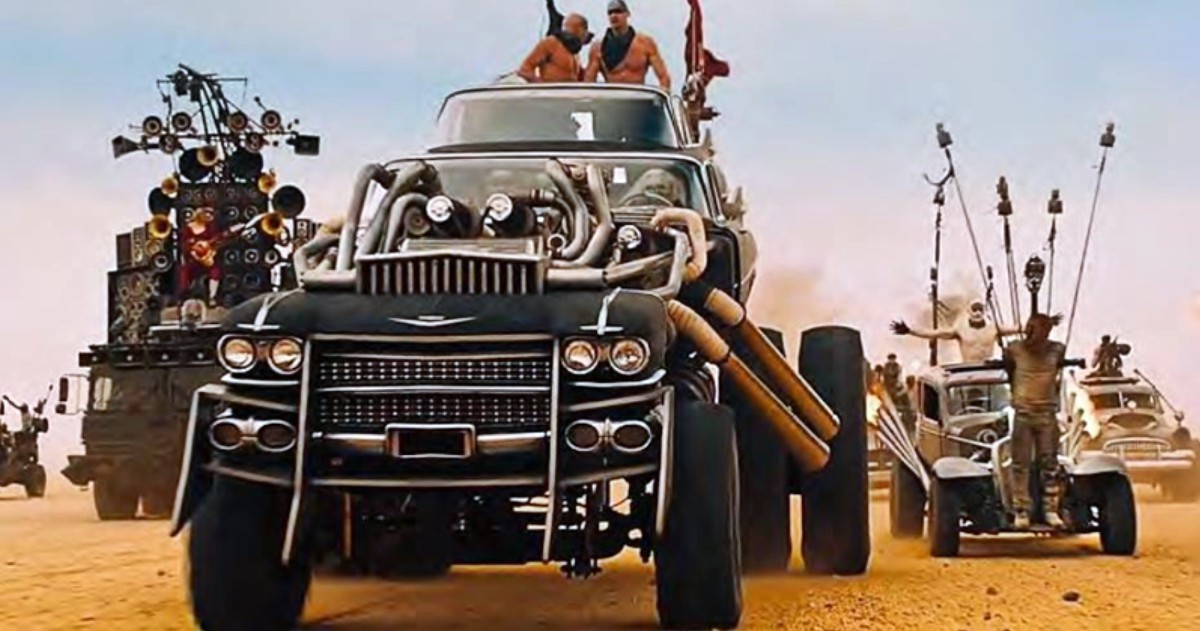 A pair of 1959 Cadillac Coupe de Villes in flagrante delicto are split, widened and mounted one to the other, pitched at a rakish angle by huge double rear wheels and powered by twin V8s slaved to a handmade gearbox capable of harnessing and harmonising the ultimate power of the ultimate leader.

The flagship of the Citadel’s Armada, The Gigahorse is memory of past glory and pledge of future victory.

Armed with whaler’s harpoon and the devil’s own flamethrower, The Gigahorse is likely the first thing you hear and the last thing you see on the Fury Road. 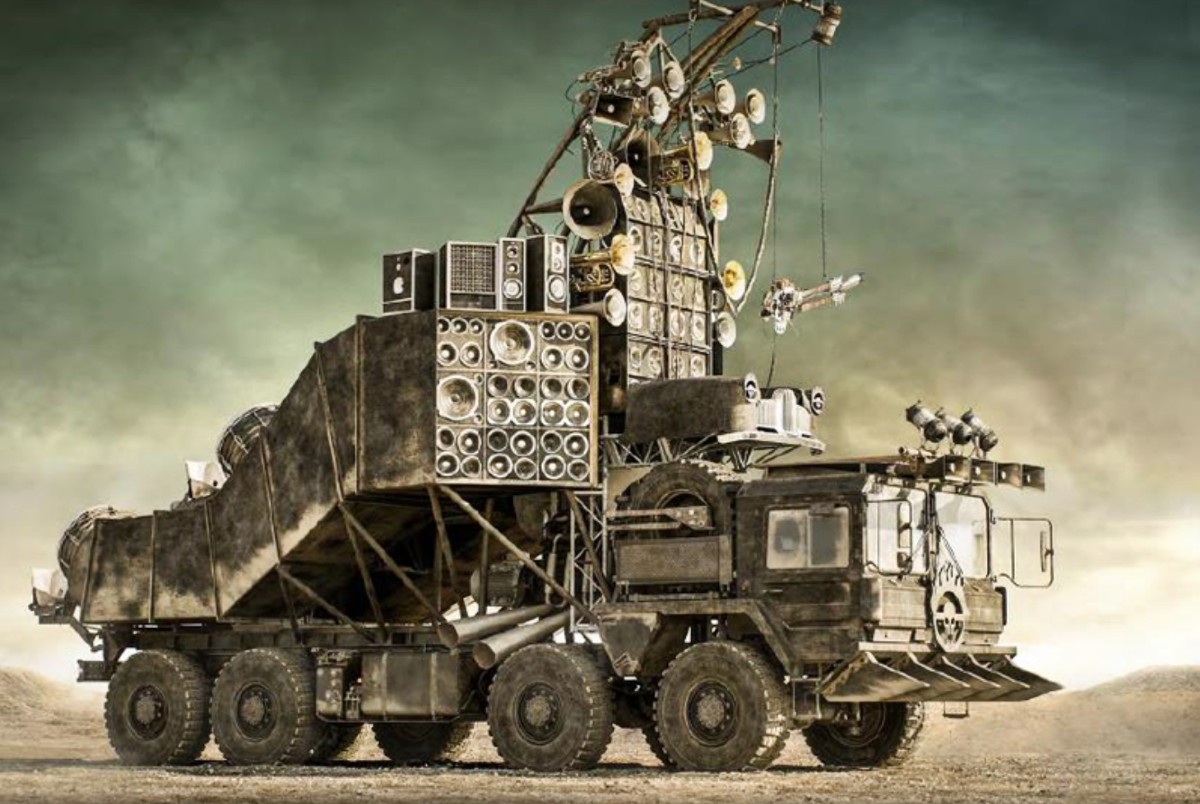 Every army has a little drummer boy, to keep the beat and stir the heart, and the War Boys of the Wasteland are no exception.

Here, mounted drummers pound a taiko beat on huge resonators built of aircon duct, while Coma The Doof Warrior, blind and disfigured, slung in a web of bungy and spread-eagled before a stack of speakers, hurtles across the desert landscape on a repurposed 8 x 8 M.A.N. missile-carrier.

The wail of the banshee, the distorted lick and demented, driving bass, the call to arms and the baying for blood, all music to the ears and grist to the mill, a symphony, a song, a single scream, the soundtrack to the end of civilization. 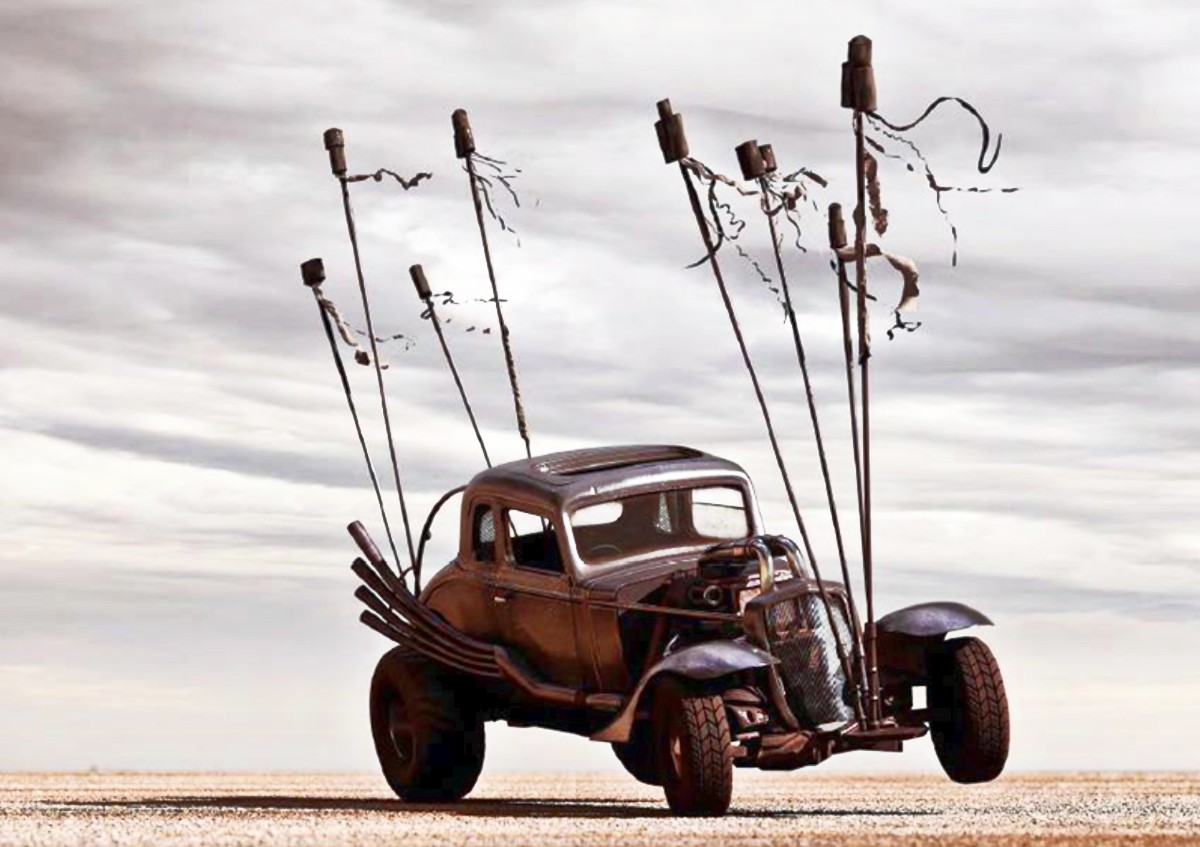 This vehicle is every hotrodders’ dream and the perfect chariot for young Nux, a true believer and gun driver in the Citadel Armada who puts the fun back in fundamental and whose failing flesh fetishises the fury and power of the V8 he hopes will lead him to Valhalla.

Nux is the deliverer of death, the fan and the fanatic, a loyal servant and lethal savant and the car is his art, hope and heart.

He has cast a totem of skull and mask on the crucifix quiver that tilts toward battle and wrought a steering wheel of doll head and cable that venerates his master, Immortan Joe.

Nux’s true god is the engine and his church the car. 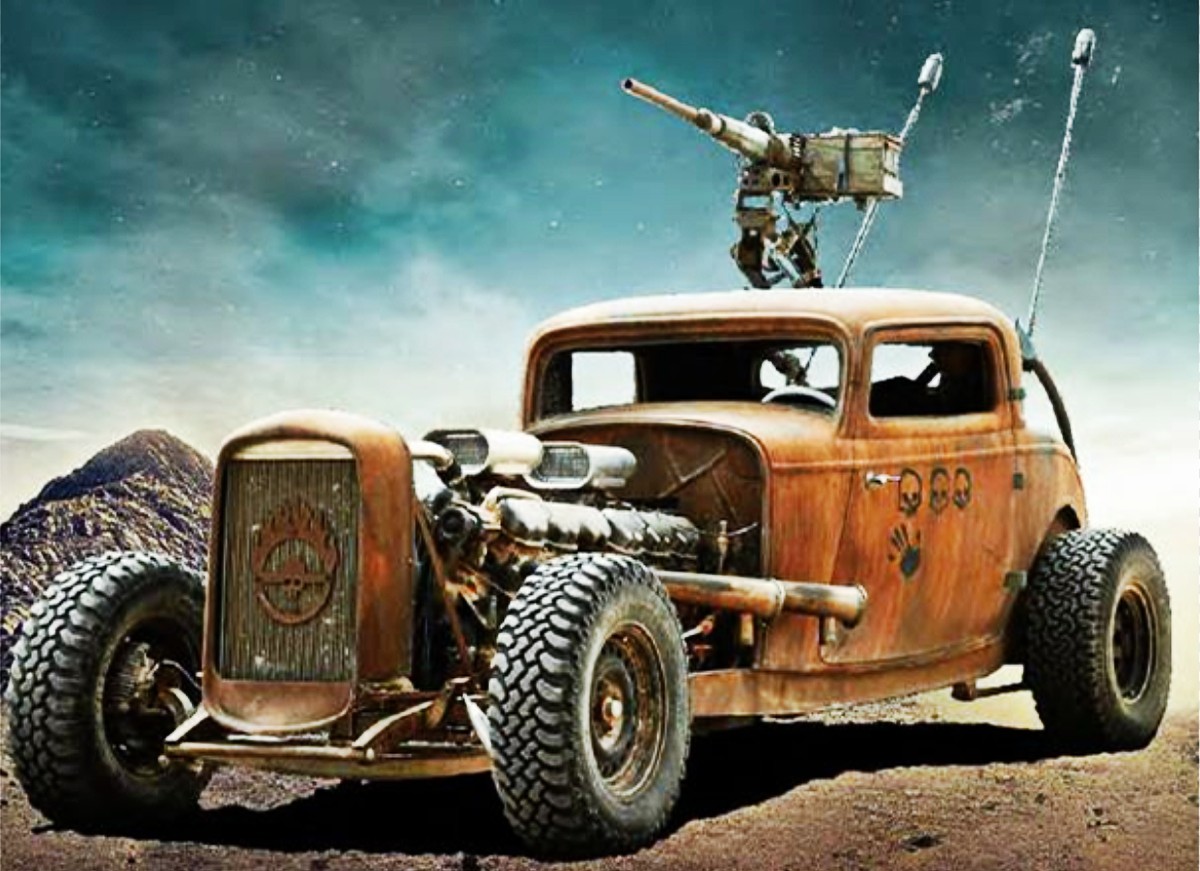 A pair of GMC 6s slung end-to-end on the extended chassis rails of a three-window coupe make for the guttural rumbling of a V12.

With nitrous injection and a single gunner keeping the power to weight ratio way down, Elvis earns his place as the hi-speed outrider of the War Rig convoy — the heartbeat of barter on the Fury Road.

The sandblasted and shiny chassis speaks of construction once upon a time in GasTown, but it has now found fame as part of Furiosa’s convoy: such is recycling in the shifting sands of the Wasteland.

A high-speed kamikaze point guard, caltrop-spewing, napalm-spitting angel of death willing, indeed hopeful of destruction in the service of the Immortan Joe.

Black pitch on silver chassis, spats spitting flame and bullet at any and all that dare interfere with his trade. 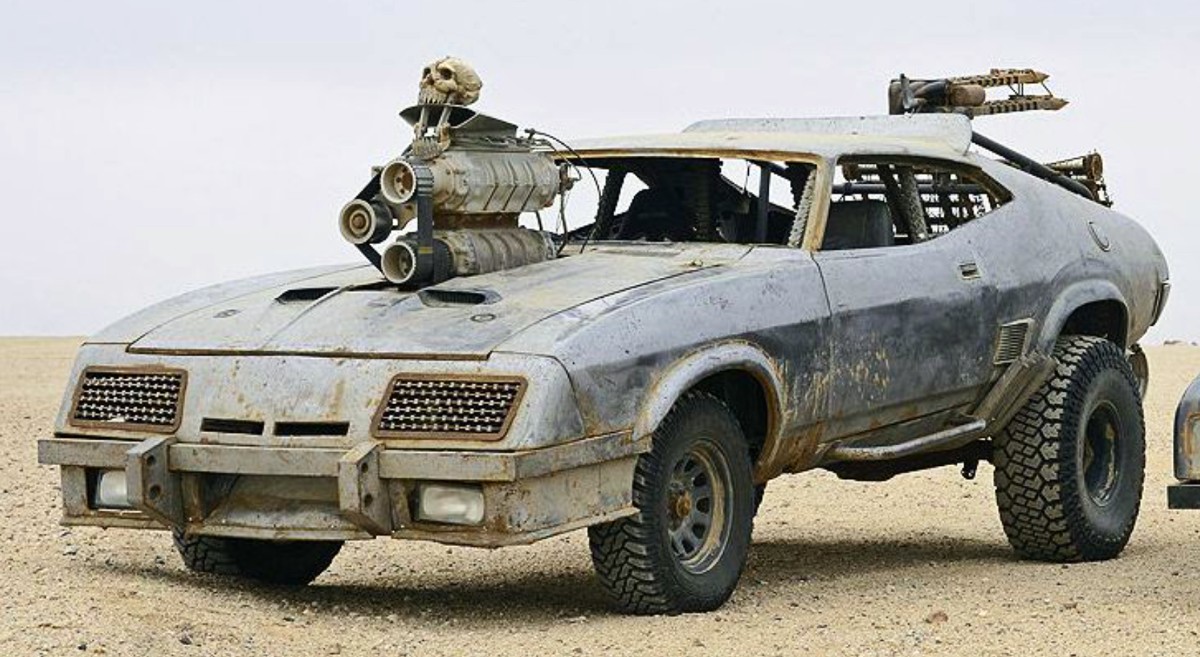 Recently salvaged along with the full-life Max, the XB Interceptor has been resurrected in the crucible of the Citadel, jacked up on off-road rails and supersized wheels, double-aspirated V8 blower now topped by skull sucking air into Scott Hat as Slit sits atop the shiny-chrome assassin, jockeying hundreds of horsepower and a handful of hate down mankind’s final straight to a finishing line ever closer and ever more . . . final. 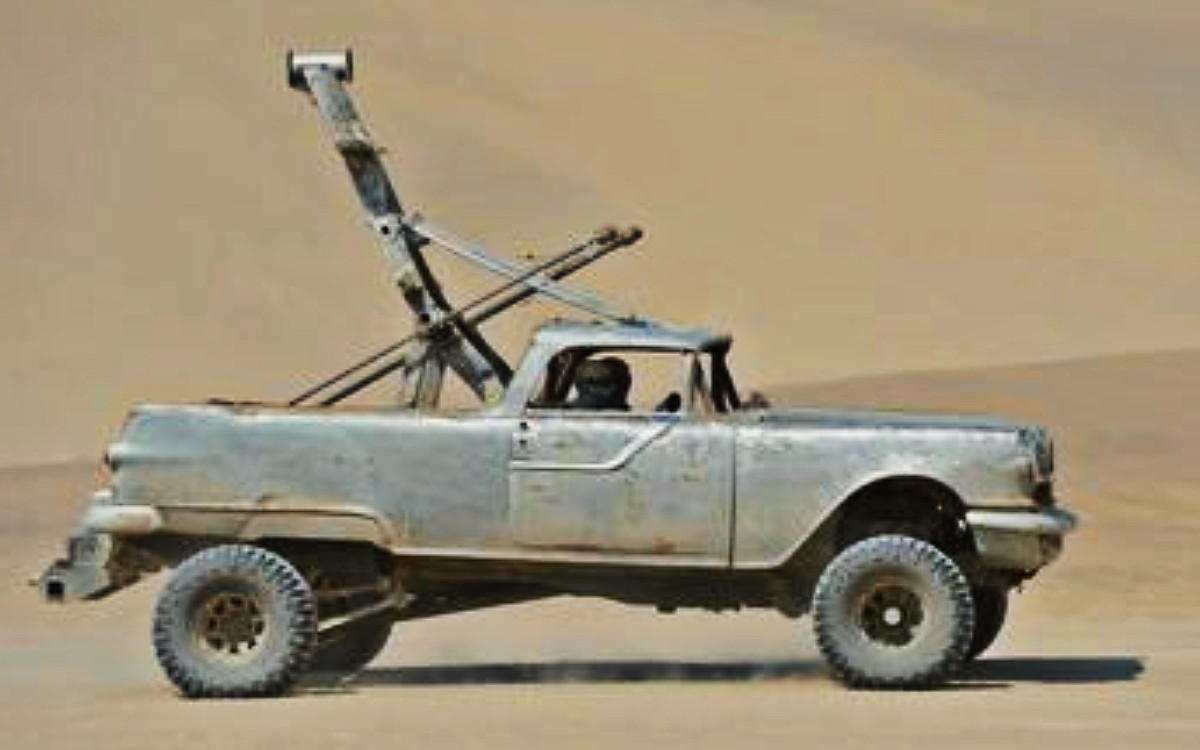 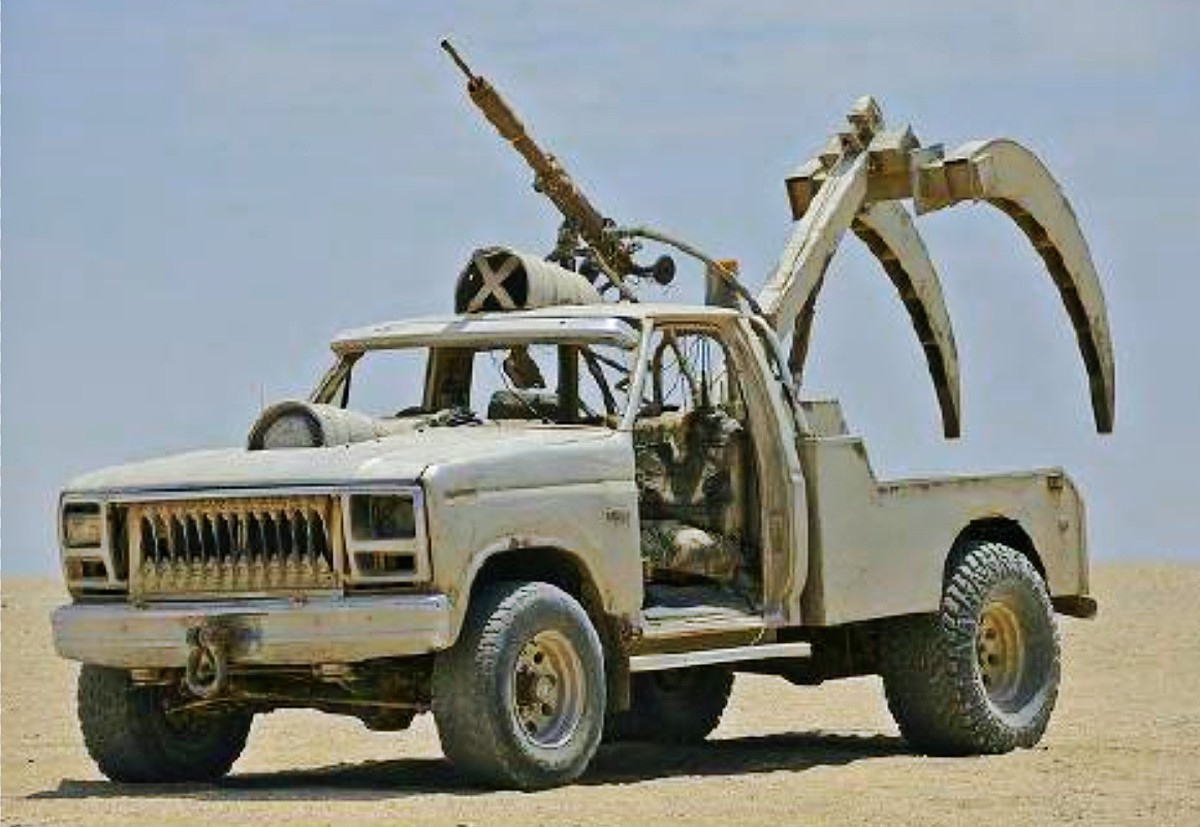 A repurposed F250 tow truck, sporting a massive harpoon for lassoing quarry, and a vicious pair of steel ‘teeth’ to bite into the earth and slow a victim’s vehicle until the coup de grace could be delivered by the rest of the Bulletfarm alumni.

Putting some spark in the old MGB

Stained rust red by the ochres and blood of the Bullet Farm plains, where it otherwise toiled in the corpse and armament-rich fields of the last great land battles before the Fall — the Some and Passiondale. 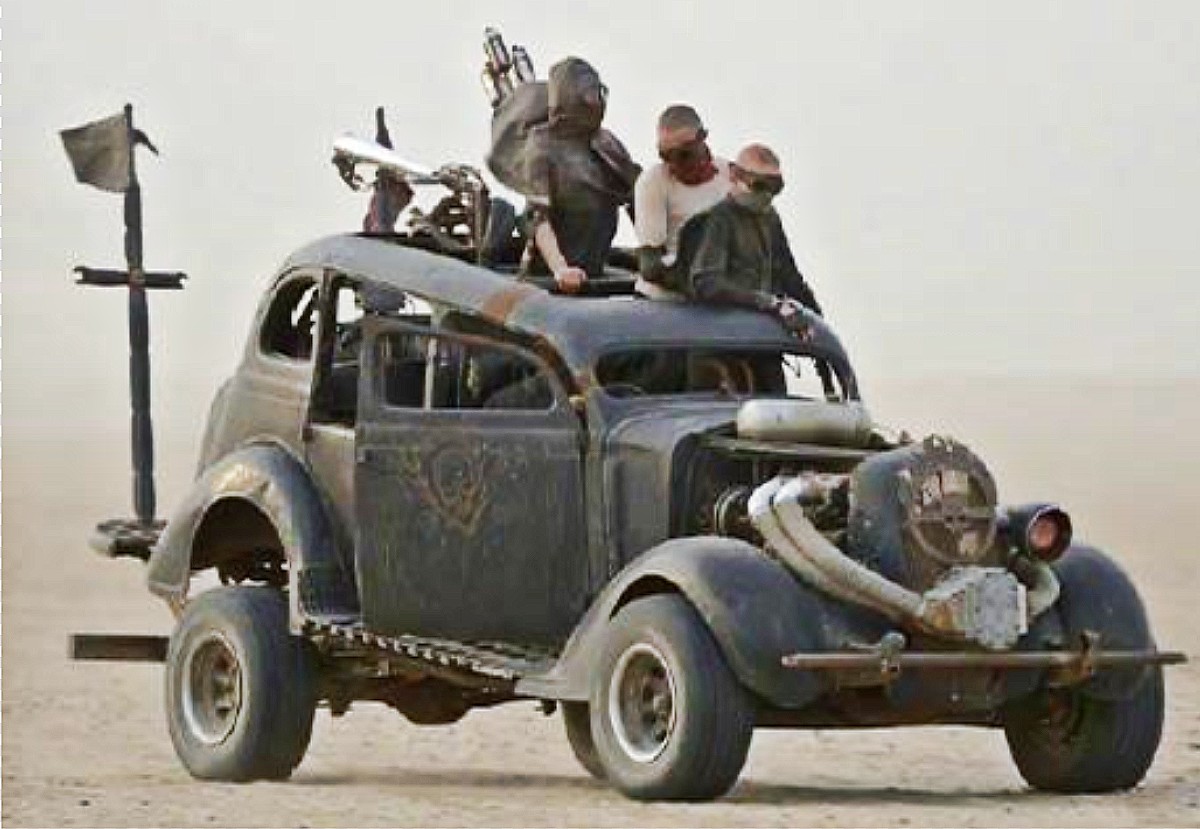 The premier Fire Car of the Citadel, a flame-throwing attack dog ‘liberated’ from Gastown, pitched in the Citadel’s black livery and pressed into service in the great chase.

An old school Hot Rod, Roots blower mounted low ahead of the radiator, sucking in air and dust in near equal proportion and therefore sporting the second-to-last pair of pantyhose in Christendom as a filter.

It reaches the quarry almost as quickly. 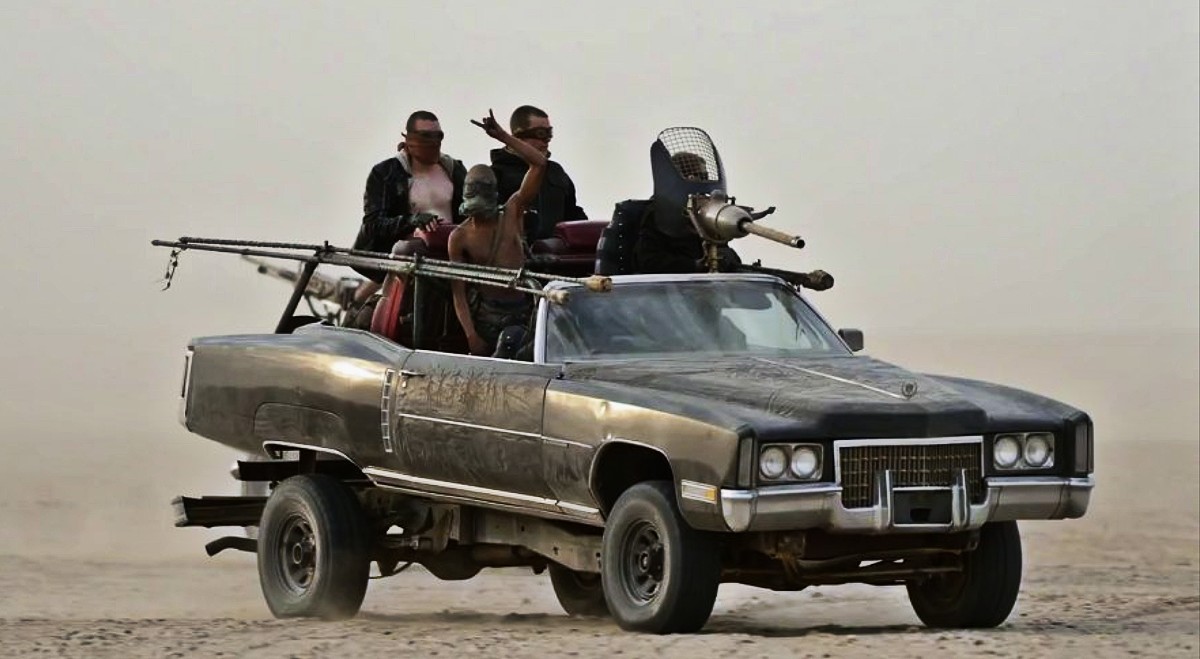 This gas-guzzling yank tank offers space aplenty as it carries a multitude of warriors into battle, caltrops and shotguns to the rear, mounted machine gun front and centre.

The bonnet sports a medieval bas-relief of dancing Death, the drivers’ door a scorecard of partners in that particular dance.

A presidential assassination in search of a grassy knoll. 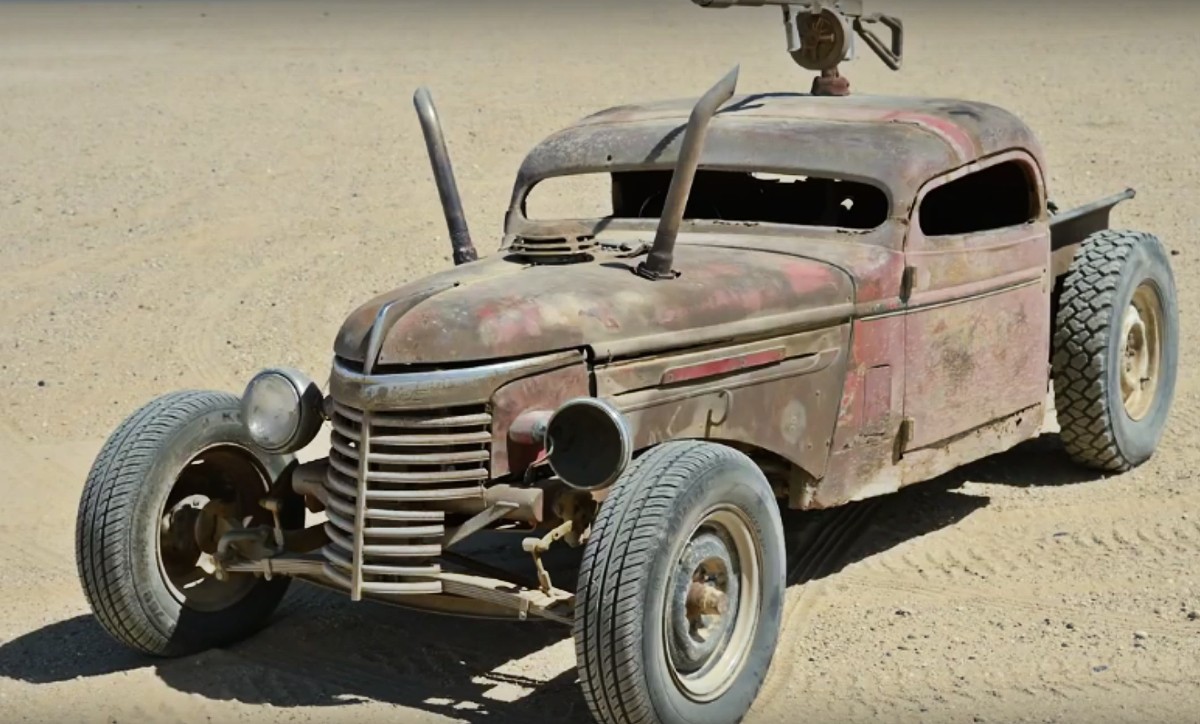 Just enough parts leftover from a real car to fashion this pint-sized but powerful pirate, a radically chop-topped, cut and shunted Chevrolet solo symphony for single driver and sub-machine gun.

The rusted patina and high calibre weaponry speak of a tough life in the killing fields of Bulletfarm, trawling for spent cartridge and cannonball and policing the hordes that mine by hand the lead and ore of the great Pit. 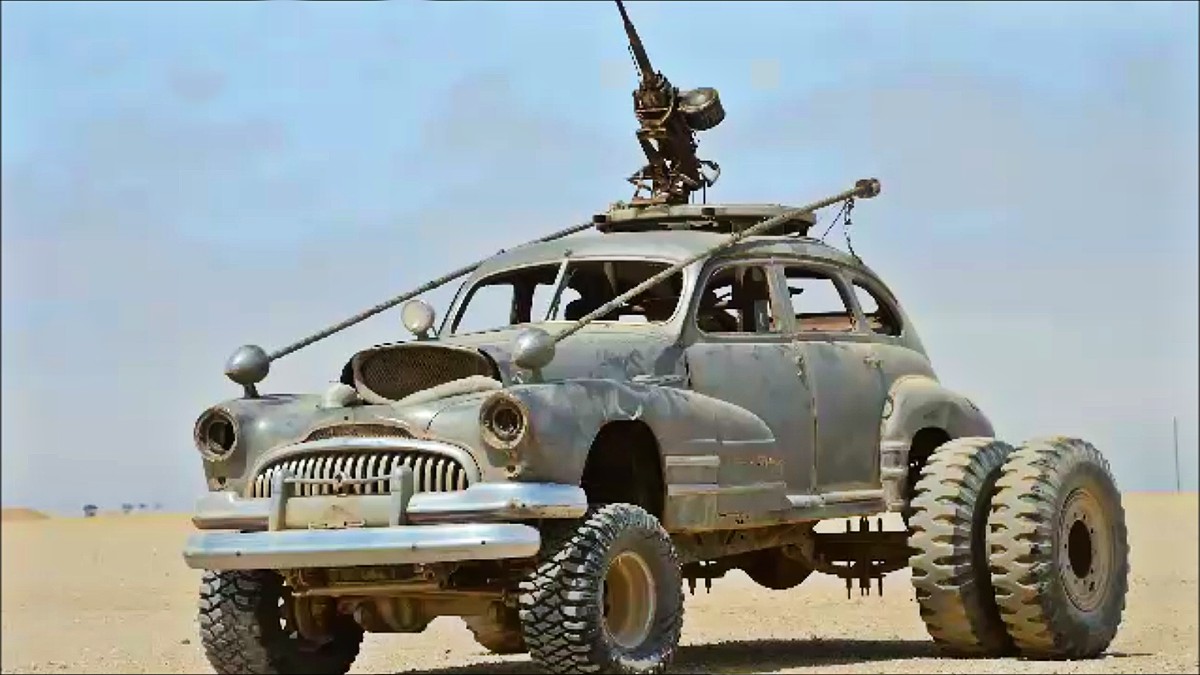 Beaten and polished, stripped and shining, straddling an extended rear diff and double rear wheels, the Buick is the standard bearer and personal guard for the The Gigahorse and Immortan Joe.

A back up crew of trusted War Boys hunker close by to supply cover fire from a slew-ring turret and anti-aircraft gun, ever ready to make the leap as reinforcement or retaliation.

CHECKOUT: Learning to make money from the movies