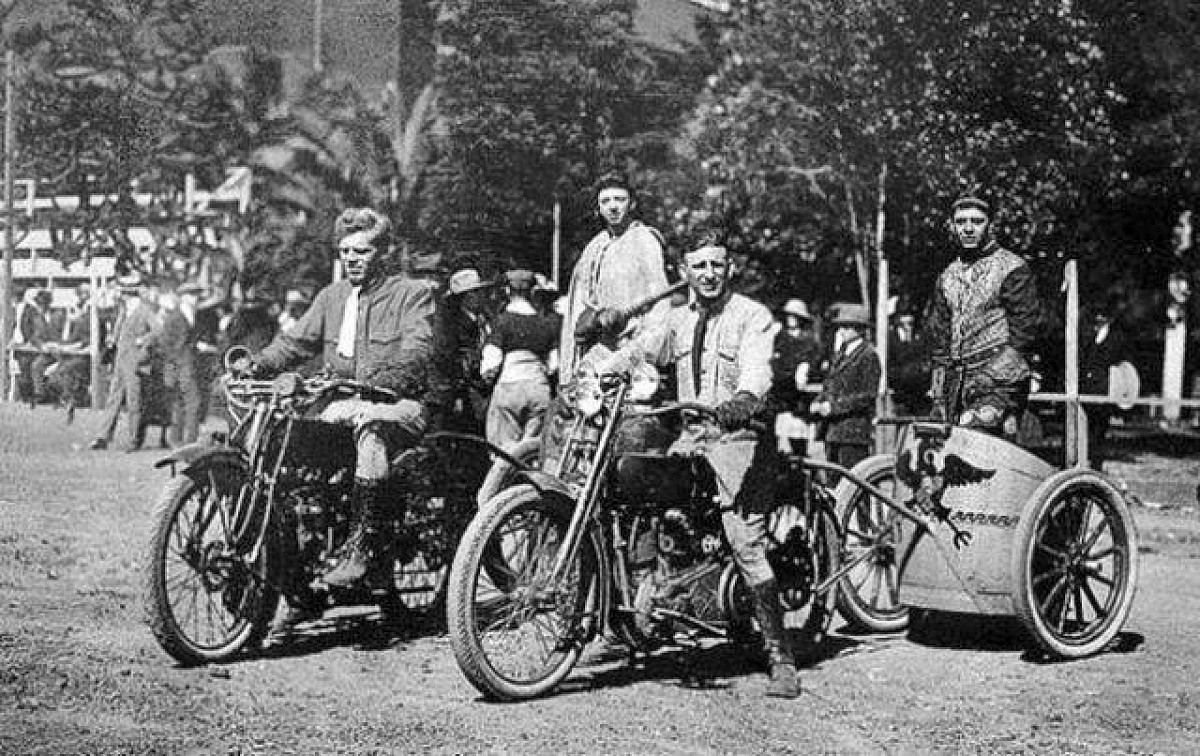 It’s easy to dismiss the old days as, well . . . old and irrelevant.

But the thing is that people are people, with the same hopes and aspirations — no matter what era they happen to come from.

And old people were once young people and when they were younger, they got up to the same kinds of things as today — the same, crazy, hair-brained, death-defying activities too.

Walking on the Moon springs to mind. You’d have to have rocks in your head to strap yourself to the head of a rocket like the Apollo 11 guys did.

Closer to home there was Felix Baumgartner’s supersonic freefall from a balloon 40 kilometres above the Earth’s surface.

Or that doco where Alex Honnold scales a 900m rock face known as El Capitan in Yosemite national park — solo and without safety ropes.

Then there’s Donald Campbell’s incredibile land and water speed records back in the 1960s that ultimately, unfortunately led to his untimely death.

But just when you think you’ve seen it all, some other form of craziness comes along — this time in the form of motorcycle chariot racing.

It’s a motorsport that combines motorcycle and chariot racing and believe it or not Australia gets the credit for getting the whole thing started back in the 1920s.

No helmets, no leathers, no safety gear of any kind, but plenty of horsepower and plenty of potential to be seriously hurt — killed even!

The theory goes that the sport has its roots in the movie Ben-Hur, not the 2003 Charlton Heston version but the original 1925 silent movie Ben-Hur: A Tale of the Christ, starring Mexican actor Ramon Novarro.

Then again a filler story, headed Roman Chariots Made from Wine Barrels,  in a September, 1922 edition of Popular Mechanics — suggests the sport may pre-date the movie.

Either way, motorcycle chariot racing became a thing in the 1920s and ’30s, and quickly spread to Europe and the United States.

Initially, a single motor cycle was hitched to the front of a chariot and they raced two-up as a team, with a rider to operate the motorcycle and passenger in the chariot.

Later the rider was ditched and made way two motorcycles lashed together to provide the necessary motivation, with reins or control rod to steer the machines.

Not sure what the story was however with accelerating and braking, not to mention changing gear.

Steering was sometimes achieved with reins attached to the motorcycle throttles.

The charioteer steered by controlling the relative speed of each machine, sometimes with rigid rod-like extensions attached to the handlebars.

A 1927 picture shows a chariot racing across a London football field, with ropes around the shoulders of the motorcycle rider for the charioteer to pull.

Another London photo shows two chariots going head to head in 1936 (not sure what the riding crop is all about?)

The National Film and Sound Archive has footage of a NSW Police Carnival held in 1936 at the Sydney Showground that features two daredevil cops in a demonstration of motorcycle chariot racing.

A 1938 photo shows a charioteer at the reins of a beast with no less than four motorcycles to provide in Potsdam, near Berlin in Germany.

Reins lead to the handlebars of all four bikes which are linked together by a series of three horizontal bars.

The accompanying article says the harness resembles the reins of some farm tractors or ploughs that are controlled by reins.

Another Australian photo shows two other policemen — Sgt Terry McCosker and Senior Constable Keith Askew from the NSW police motorcycle squad — at the reins of motorcycle chariots in a full dress rehearsal for the 1974 Police Carnival.

In the United States, there’s evidence that motorcycle chariot racing took place at the original Charlotte Motor Speedway, which was an old wooden track built in 1924 to host Indy Car and Motorcycle races.

It’s fascinating stuff and a quick search shows there has been efforts in recent times to kick-start the sport again.

No one seems to know much at all about motorcycle chariot racing or why the sport fizzled out, but these charioteers were genuine thrillseekers.

Let us know if you can shed any light on this long forgotten form of motorsport?

CHECKOUT: Moto Guzzi celebrates a century in the biz

CHECKOUT: Tomahawk an engine on wheels