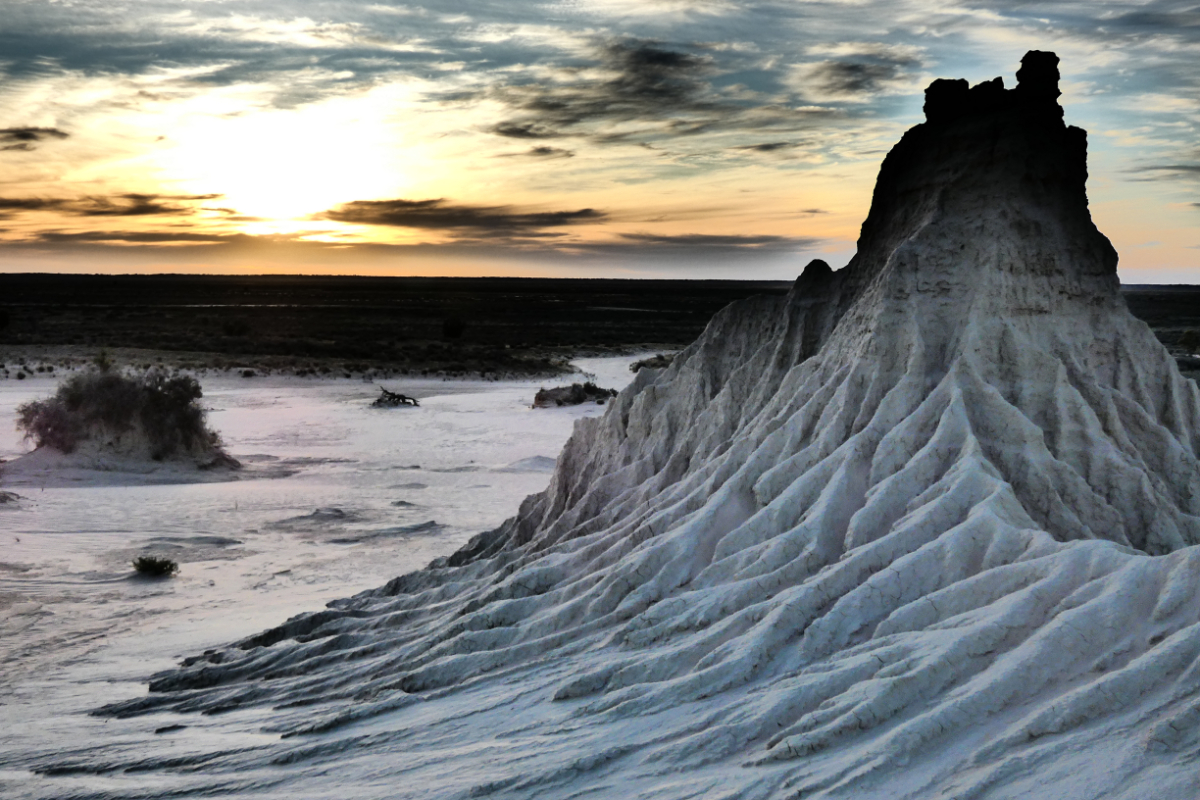 We hit the road to Broken Hill — Day 5

Day Five takes us from Lake Mungo National Park to Broken Hill, a distance of 415km — most of them fast dirt driving.

Lake Mungo is a stunning, a geographic anomaly that has given up some of the oldest human bones known to man.

Scientists have discovered artefacts that date back more than 50,000 years.

This makes Mungo one of the oldest places outside Africa to have been occupied by modern humans since ancient times.

They have been preserved by what’s known as a giant lunette, made up of layers of sand and clay blown there from the adjacent ancient lake bed.

Our tour guide Glenn Farmer and his wife Hayley run nearby Mungo Lodge where we spent the night.

Glenn explains other remains have been found, but have been returned to the indigenous owners of the land for reburial on the far side of the lunette.

Access to the site is strictly controlled by three aboriginal groups and visitors are forbidden from taking anything they find.

It’s okay to look, but you have to leave it behind.

To prove a point, a few years back scientists scattered about 180 ‘fake’ artefacts across the site.

Within two weeks they had all been souvenired.

Since then many artefacts haven been returned — most of them by mail.

Leaving Lake Mungo we were unsure whether the road to Pooncarie would be open after recent rains.

But apart from a bit of slipping and sliding the Citroen C5 Aircross proved more than capable, with drive mode settings for sand, mud and ice.

Not much to see at Pooncarie itself, so we push on to Menidee.

Don’t know what happened to the promised cafe, due to open in 2012?

May be it opened and then closed again — all in that time.

Menindee promises some beautiful lakes, but the brochures must be out of date because the lake, the main one at least, looks like it has been dry for years.

At popular Sunset Strip the road to nowhere we realise is actually the boat ramp to nowhere, with only a few stray cattle in sight where the water should be.

The golf course and “dunny tree” are crackers though.

Not much to see either side of the road from here as we push on to Broken Hill, just red sand and low, scrubby vegetation — not even a tree to park under and eat our lunch.

With the temperature hovering around the 40 degree mark we finally roll into Silver City, to spend a few days with friends Peter and Kim.