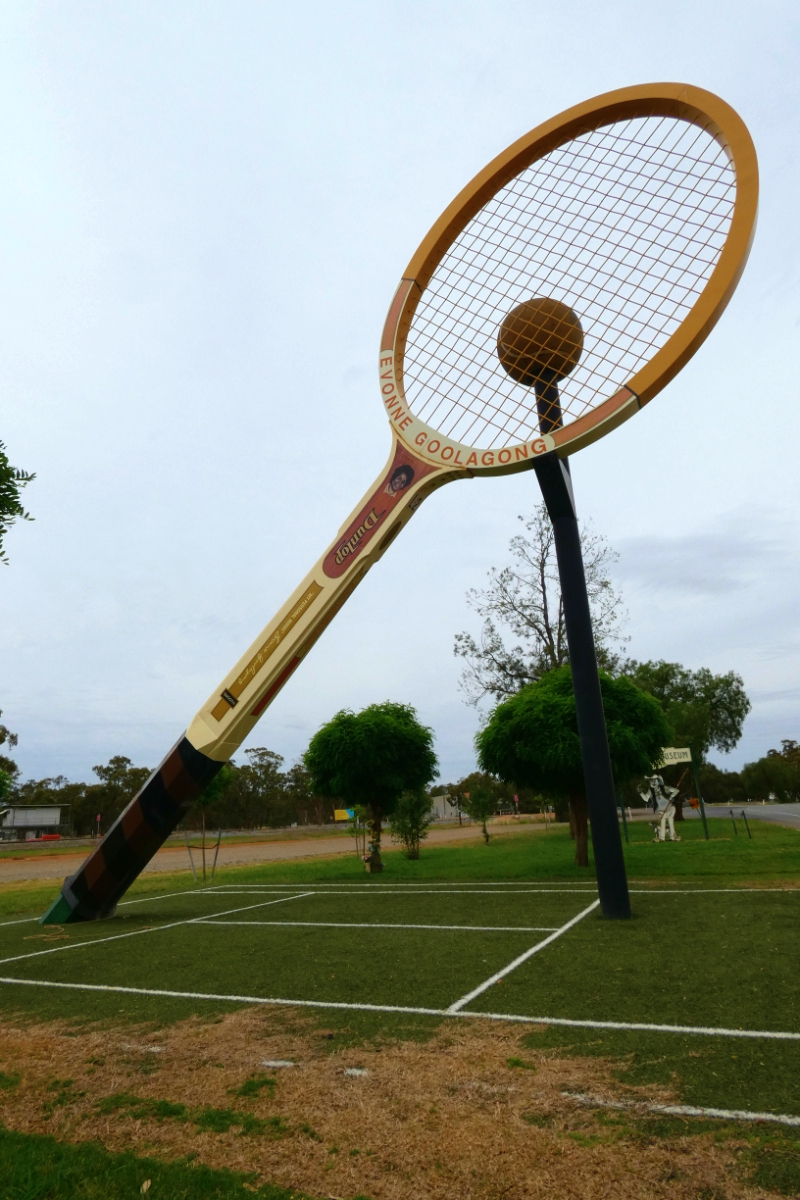 We hit the road to Broken Hill — Day 2

Day Two takes us 265km from Gundagai to Griffith, with stops along the way at Coolac, Cootamundra, Stockbingal, Temora, Ardlethan and Barellan.

Gundagai continued to produce the goods after breakfast, with a stop at the information centre where we discovered Frank Rusconi’s amazing marble masterpiece, a miniature building constructed of 20,948 individual pieces of carved marble that took 28 years to build.

Rusconi, a monumental mason who died in 1964, also made the base for the Dog on the Tuckerbox monument.

Adjacent to the tourist information centre is a sculpted tribute to Steele Rudd’s famous “Snake Gully” characters from the “Dad and Dave” radio serial — Dad, Dave, Mum and Mabel .

Down the road is another sculpture, this one a tribute to Yarri and Jacky, two aboriginals who rescued 49 people with their canoe in the great flood of June 1852 which claimed the lives of 79 of the town’s 250 residents, and destroyed 71 buildings..

The settlers were warned not to build the town so close to the Murrumbidgee River, but ignored the advice.

It’s just a shame the people who created the story board next to the sculpture can’t spell.

After Gundagai we paid an almost obligatory visit to the Dog on the Tuckerbox at nearby Coolac.

It’s a lot smaller and less impressive than we remember.

Next stop was Cootamundra where we visited the birthplace of the incomparable cricketer Don Bradman where there is a small museum staffed by volunteers.

We also had a wander through the nearby The Captains’ Walk, a park which features some 47 bronze busts of Australia’s cricket captains.

Some of them don’t look much like the originals.

By the way, here’s a bit of trivia.

The original name of the town was Cootamundry. It didn’t become Cootamundra until 1952 — look it up.

Stockinbingal is a tiny railway town of close to 400 people but little more than a few buildings.

Temora’s claim to fame is of course the aviation museum, but most of my time was spent sitting at a picnic table trying to file a motorsport story.

Next was Ardlethan, one of two Australian towns that claims to have produced the first Kelpie working dogs.

The other is Casterton in Victoria.

The Ardlethan sculpture of the dog is not much bigger than the one on the Tuckerbox.

Day two also delivered the BIG TENNIS RACQUET, which be found in Barellan, the birthplace of tennis ace Evonne Goolagong-Cawley.

We hit the road to Broken Hill — Day 1

Erected in 2009, the 13.8 metre monument is an exact 20:1 replica of the wooden Dunlop a tennis racquet used by the tennis player.

Last stop where we spent the night was Griffith in the heart of the Riverina, the town where ant-drugs campaigner Donald MacKay met his end in 1977.

Here we investigated what remains of a cave dwelling occupied for a staggering 23 years by an Italian immigrant named Valerio Ricetti.

Ricetti, a skilled artisan who died in 1952, worked only at night and in the early morning to turning the cave into his own private “utopia” complete with kitchen, chapel, landscaping, pathways, stone walls, stone stairs, paths, terraced gardens and cisterns for water supply.

Our digs for the night, the Griff Motel.

The question is: do we put it through the car wash before all the bugs go hard?

CHECKOUT: Germans agree to give back historic cross