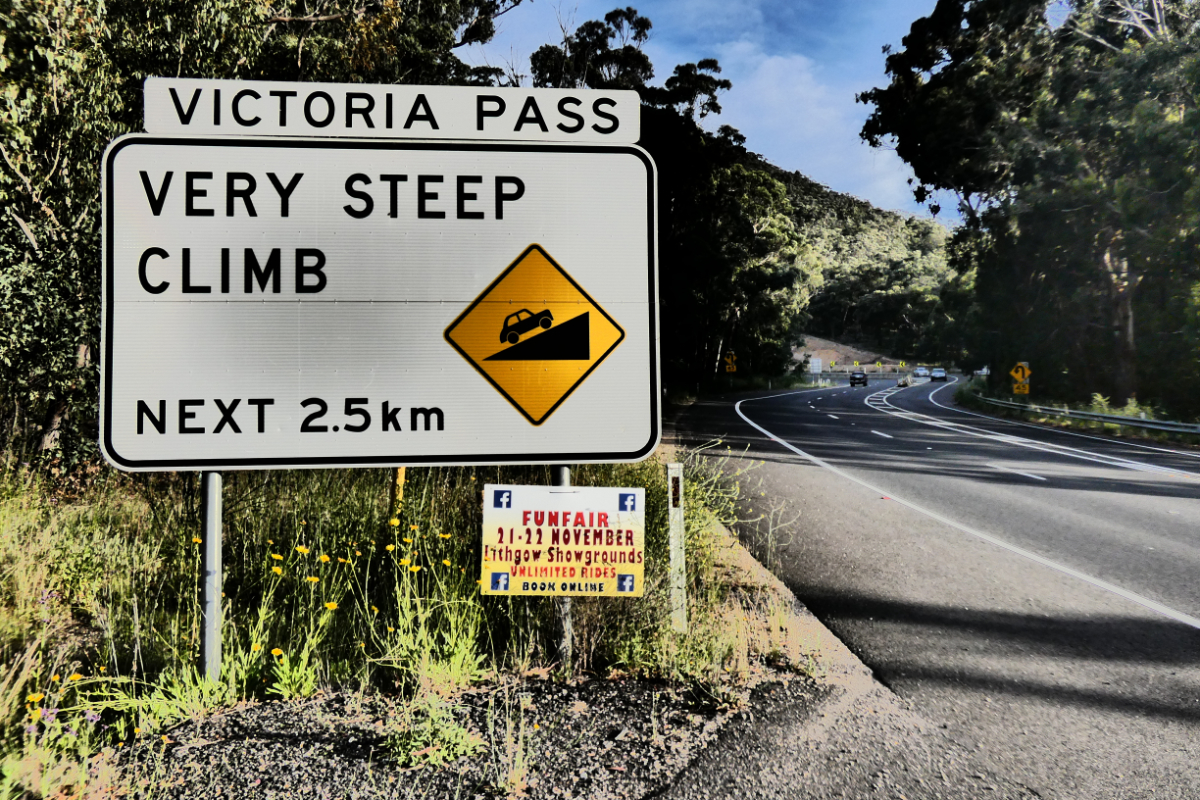 Day 14. Well, the day has finally arrived. The last day of our 3500km road trip from the Blue Mountains to the outback town of Broken Hill in NSW.

Our final leg takes us 280km from Parkes to Springwood, witjh stops along the way at Manildra, Orange, Lucknow, Bathurst, and Hartley.

The landscape has changed dramatically, from flat red dirt and low scrubby vegetation, to green rolling hills with trees crowding the roads.

The dams contain water and the paddocks are dotted with bails of hay.

Our first stop, Manildra, is a small town located on the railway line halfway between Orange and Parkes, with a population of about 460 people.

It’s home to the Manildra Flour Mill, the largest in the Southern Hemisphere.

The Amusu Theatre (pronounced ‘amuse you’) is the oldest continually operating cinema in Australia.

It dates back to 1923, when local businessman Allan Tom started a travelling picture show using a carbon arc projector carted on the back of a flatbed truck.

He screened silent films to crowded halls and tents around the central-west.

Later Tom used a record player, adapted the projector for talkies and in 1936 established a permanent theatre next door to the family car repair garage — now a movie poster museum.

The town’s other claim to fame are the faces painted on railway rolling stock.

Back in 2016 world-renowned street artist Guido van Helten immortalised seven townspeople by painting their faces on the side of rail cars (we could find only one).

About 50km down the road and 250km west of Sydney, Orange is a large regional city of 40,000 residents and one that I have a connection with.

Years ago I had to drive there once a week to supervise production of a local newspaper of which I became the editor.

Two hours there, two hours back and I didn’t have to pay for fuel — whoopee!

They were so stingy the compositors drew the keylines on pics rather than using tape, often leading to blobs where the lines met at the corners.

Orange is a leafy city and one gets more snow than any other city in the country (not difficult).

It’s the birthplace of poets Banjo Patterson and Kenneth Slessor, and it was here the first Australian Touring Car Championship was held at the Gnoo Blas Motor Racing Circuit in 1960.

At 860 metres it also produces some fabulous ‘cool climate’ wines.

Duntryleague Mansion was built in 1876 by James Dalton and purchased by the Orange Golf Club in 1935.

A hop, skip and a jump down the road, Lucknow is more of a locality than a town.

Gold was discovered here in 1851 and remnants of the mines still litter the landscape.

During the 1880s a series of dams were built to store water for the mines, with bluestone walls that can still be seen.

The Boat Dam was used by locals for swimming, rowing and sailing regattas.

A further 60km down the road we find Bathurst which needs no introduction.

It’s a large regional city with a long past, home to the Bathurst 1000 motor race and my sister-in-law and her family.

It gets bloody cold in Bathurst. I’ve travelled all over the world, but I’ve never been colder than the birthday weekend I spent in nearby Rockley.

It was so cold it hurt.

With wide tree-lined streets, the city has many elegant buildings and is home to several museums including the Australian Fossil and Mineral Museum, that houses the Somerville Collection of fossils and minerals.

Set on 20 hecatares, the 40-room mansion Abercrombie House was built by the Stewart family in the 1870s and lately has been host to outdoor Shakespeare productions.

We hit the road to Broken Hill — Day 3

There’s so much to see and do in Bathurst.

Hartley is a small historical village at the western foot of the Blue Mountains, preserved as an historic site by the National Parks and Wildlife Service.

Many years ago my boss wanted to go halves in a deal to buy the old post office and turn it into a coffee shop.

Needless to say it didn’t happen.

More recently, very early one morning, we shot the cover picture for Carsguide Car of the Year here.

Steep, treacherous Victoria Pass guards the entrance to the Mountains, with its many lookouts, the Three Sisters and historic buildings such as the rambling Hydro Majestic Hotel at Medlow bath.

Dating back to 1891 and once three separate sites it was acquired by retailer Mark Foy to create a hydropathic sanatorium, believing the land contained mineral springs.

The prominent dome of the Hydro once housed a casino and was sourced from Chicago, shipped to Australia and transported by bullock train to the site.

The hotel overlooks Megalong Valley which supplied the produce used in the kitchens, winched from the valley floor by flying fox.

Well, that’s about it.

As the day drew to a close we made our way home after 3500 long kilometres on the road, already talking about our next trip.

Our thanks to Citroen for the loan of the C5 Aircross. It’s looking a little dusty and dirty, but otherwise unscathed, with a review to come shortly.