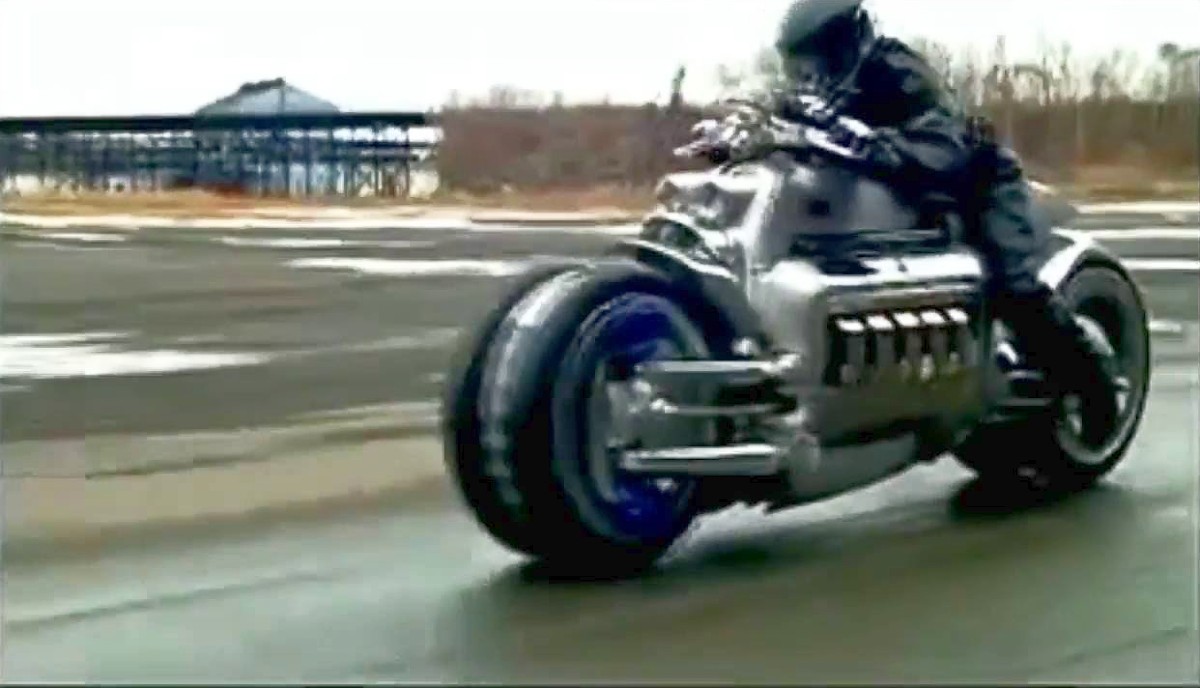 Was Tomahawk all talk, or the fastest bike ever?

Home
Wheel life
Chain mail
Was Tomahawk all talk, or the fastest bike ever?

What’s the fastest motorcycle in the world?

Well, in theory it’s the Dodge Tomahawk, a concept shown at the 2003 Detroit motor show — although as far as we know it’s never been put to the test.

Dodge describes the vehicle as both an “automotive sculpture,” intended for display only — but “rideable”.

The Tomahawk is basically the 8.3-litre V10 from a Dodge Viper, supported by a set of four wheels, and because there’s four of them it’s arguably not even a motorcycle.

With its amazing looks and daring design, it attracted plenty of attention — as you can imagine.

Based on power and gearing calculations, Dodge’s claims of a theoretical top speed of 480 to 680 km/h were debunked by the motorcycling and automotive media of the time.

Spokesman David Elshoff said Tomahawk would someday be taken for a run at the Bonneville Speedway, but to this day this has not happened.

In 2003, Chrysler’s chief operating officer Wolfgang Bernhard said no one had ridden the Tomahawk faster than 100 mph or 160km/h.

Dodge has declined offers to put the top speed claim to a test or even to allow testing with a dynamometer that can simulate a top speed test, and no one is known to have attempted to ride the Tomahawk to its maximum speed.

A request from one publication to test the Tomahawk’s performance was refused, and Dodge also declined the same publication’s request to interview the company’s test riders — or to relay their riding impressions.

The design was the work of Chrysler staff designer Mark Walters.

Once a full-scale running, workable concept vehicle had been approved, the design and fabrication process took six months.

The engineering, as well as the fabrication, was outsourced to RM Motorsports, a Wixom, Michigan specialty shop that fabricates one-of-a-kind parts for rare and vintage race cars.

Walters said Kirt Bennett at RM handled the task of making Walters’ sketches a physical reality that was mechanically sound.

So theoretically the Dodge Tomahawk is the fastest motorcycle.

In 2003 a Tomahawk was ridden by Bud Bennett of RM Motorsports at the Goodwood Festival of Speed.

Bennett said that up to then only four riders had ever ridden a Tomahawk.

Motorcycle land speed record rider, Dave Campos, doubts the Tomahawk could reach 200 mph (320 km/h) because at high speeds, he said the rider would be “lifted right off the bike” without a fairing, and the four-wheel steering could also be a problem.

Whether it’s the fastest motorcycle in the world or not, it’s certainly a magnificent looking machine and maybe in terms of publicity it is better to keep people guessing?.