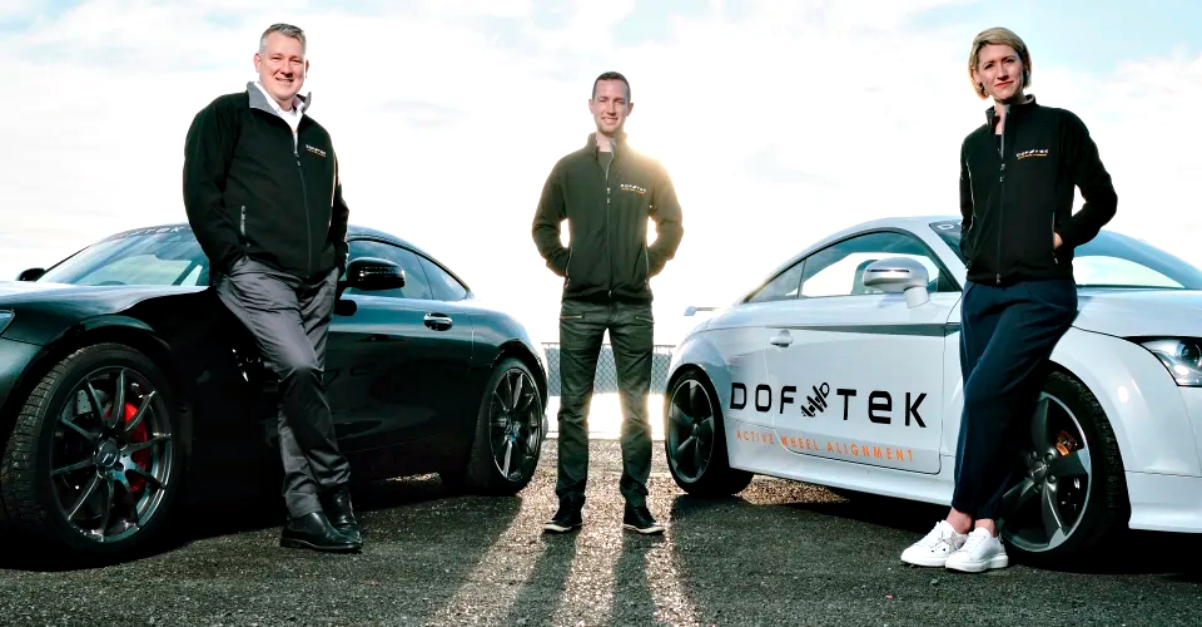 A Victorian tech startup has come up with a revolutionary new form of steering for cars.

Until now, wheel alignment could only be adjusted manually by a mechanic in a workshop.

As such, a single wheel alignment setting must be chosen to cover all possible uses and conditions.

In a word, it’s one big compromise.

Ideally, wheel alignment should vary in real time on the road and that’s where the company Doftek comes in.

Doftek’s system, described as an “active wheel alignment” system, has been developed to ensure a tyre maintains optimal contact with the road at all times.

In normal driving circumstances, it explains wheel alignment is adjusted mechanically and leaves the wheels, generally the front, in place.

It’s an intriguing theory and one that has been developed by Doftek’s Geoff Rogers over the past two years.

This allows for the driver to adjust for varying road conditions or driving applications.

Rogers claims there is a handling performance increase of up to 15 per cent, a temperature reduction in the tread of up to 10 per cent, and rolling resistance is reduced by 10 per cent.

Doftek is now working on a second version of its system, which will offer next-generation dynamic (semi-active) and adaptive (real-time) capabilities.

Initial tests show it achieve an improvement of up to 29 per cent in handling performance, observed during initial testing with differential camber settings.

A partner in this has been the Advanced Manufacturing Growth Centre, a not-for-profit and industry-based organisation born from an Australian Government sponsored Industry Growth Centres Initiative.

The system is aimed initially at the luxury and performance car segment, to be followed by the EV segment.

With the varying types of suspension that underpin vehicles, such MacPherson strut, double-wishbone and multi-link systems, the lightweight and compact design makes AWAS ideal for adaption across more platforms.

Co-founder of Doftek, Priscilla Rogers, said of AMGC has an executive team and staff, who have the industry-specific experience, networks and leadership needed to be successful in bringing new technologies to market.

“We feel extremely fortunate to be able to work alongside an exceptional team at the AMGC, and build a strong partnership,“ she said.

He’s a believer in the project and says that this will build a small but intense workforce.

“Doftek has designed, engineered, tested and, with our assistance, will now commercialise an innovative automotive solution with global relevance and impact,” he said.

“In the fullness of time, Doftek expects to support 40 highly-skilled Australian manufacturing jobs.”

This includes more staff at Doftek, five for the company’s suppliers, and 30 for project partners.

Other partners include On Point Engineering to contribute knowledge gained through years in the Supercars Australia competition, Erntek to supply and commission electric motors, Flexicut Engineering to manufacture purpose-built parts, and 3D Systems to rapid prototype parts and contribute 3D printing know-how.

Doftek is looking to partner with global automotive companies to bring active wheel alignment systems to the world.

CHECKOUT: Drivers have no idea how to use tech in cars