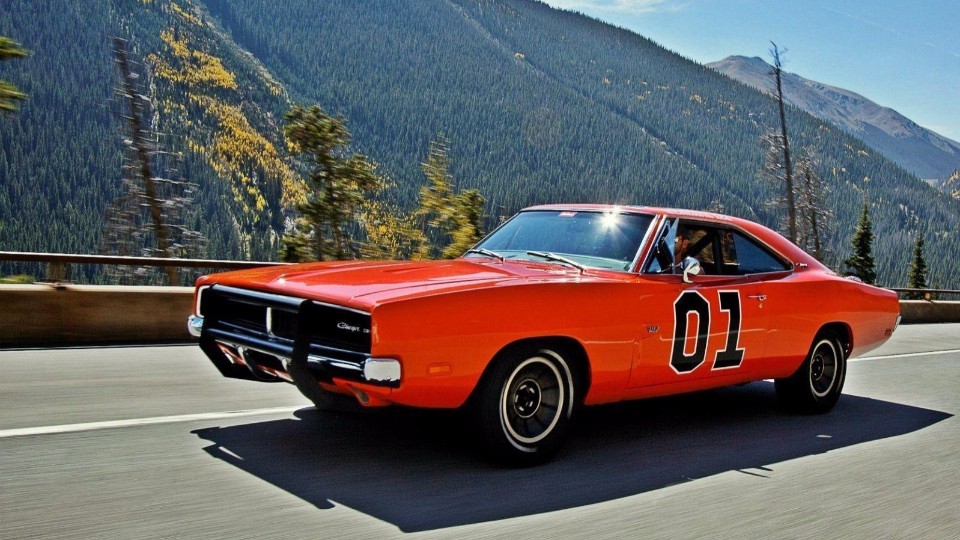 TV show Dukes of Hazzard had a reputation for churning through Dodge Chargers.

More than 300 Chargers are said to have been wrecked during the making of the show back in the 1980s.

When scouts had trouble sourcing replacements they began to convert earlier models to look like the 1969 model used in the show, changing the lights and radiator grille.

Moonrunners was about a tight-knit family determined to produce and sell moonshine, despite stiff competition and marauding federal agents.

After the movie writer and director Gy Waldron, who hails from the deep south, put together a proposal for a TV series loosely based on the script.

The Dodge Charger was chosen for the role of General Lee as it was well known to NASCAR fans in the southern state of Georgia where the show was filmed.

The General Lee appears in all but one of the 145 episodes.

In the third episode, Mary Kaye’s Baby, the Duke brothers are seen in a blue 1975 Plymouth Fury borrowed from Cooter that Luke later blows up.

For its role the car was painted bright orange, the number 01 added and a Confederate flag emblazoned across the roof.

With cars becoming hard to find the producers later modified 1968 Chargers to look like a 1969 by installing 1969-model tail lights, tail light panels, and grilles.

The cars used in the series apparently underwent surprisingly few modifications for their screen role.

Each was fitted with a four-barrel Holley carburettor, aluminium intake manifold, and stiffer shocks and springs to firm up the handling, with inner tubes added to tyres as a precaution.

The doors of the cars were welded shut to stop them springing open and the parking brake lock removed so hand brake turns could be performed.

The sealed doors explain why Bo and Luke are always seen sliding in and out of the windows.

Interestingly, much of the driving we see Bo (John Schneider) and Luke (Tom Wopat) doing was actually performed by the actors.

Any time the script called for the General to leave the ground, however, stunt doubles were called in.

The cars often became airborne and to keep them level during jumps, lead ballast was added to the boot to prevent them from nose diving.

Legend has it that the General Lee’s musical horn was the result of a chance discovery.

A production crew on its way to a shoot passed a car with a horn that tooted the first 12 notes of Dixie.

To cut a long story short, they chased after the driver and offered him cash for the horn which was removed on the spot.

It turned out the same horn could easily be obtained through the J C Whitney catalogue, but the crew wanted it right away for filming.

The theme song “The Good Ol’ Boys” was written and performed by Waylon Jennings, who was also “The Balladeer” and served as narrator.

The car had been scrapped after being wrecked during the famous opening jump shot, but was discovered in a junkyard by the president of the North American General Lee fan club.

In 2015, following the shootings in Charleston, South Carolina, Watson announced he would remove the Confederate Flag from the roof of the car and replace it with the standard US flag.

In case you were wondering, Daisy Duke’s (Catherine Bach) car was a 1974 Plymouth Road Runner, painted yellow with a black stripe =- at least in the first few episodes.