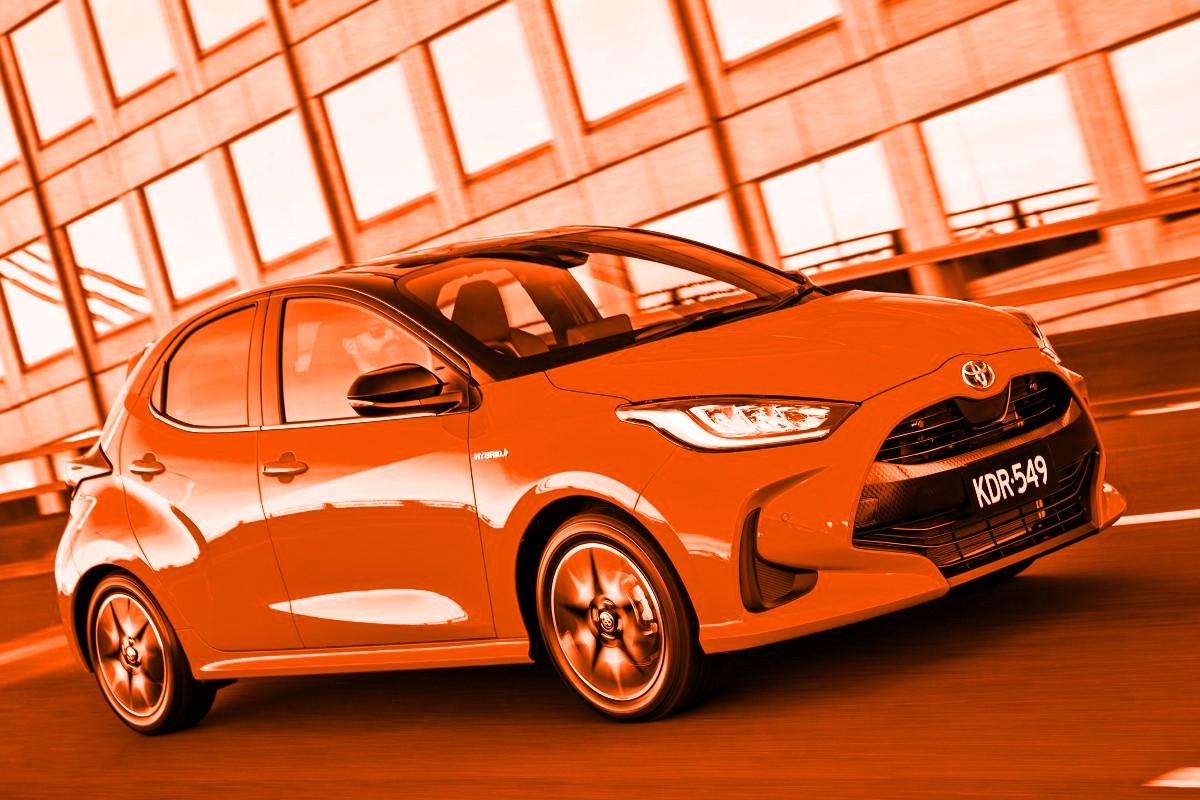 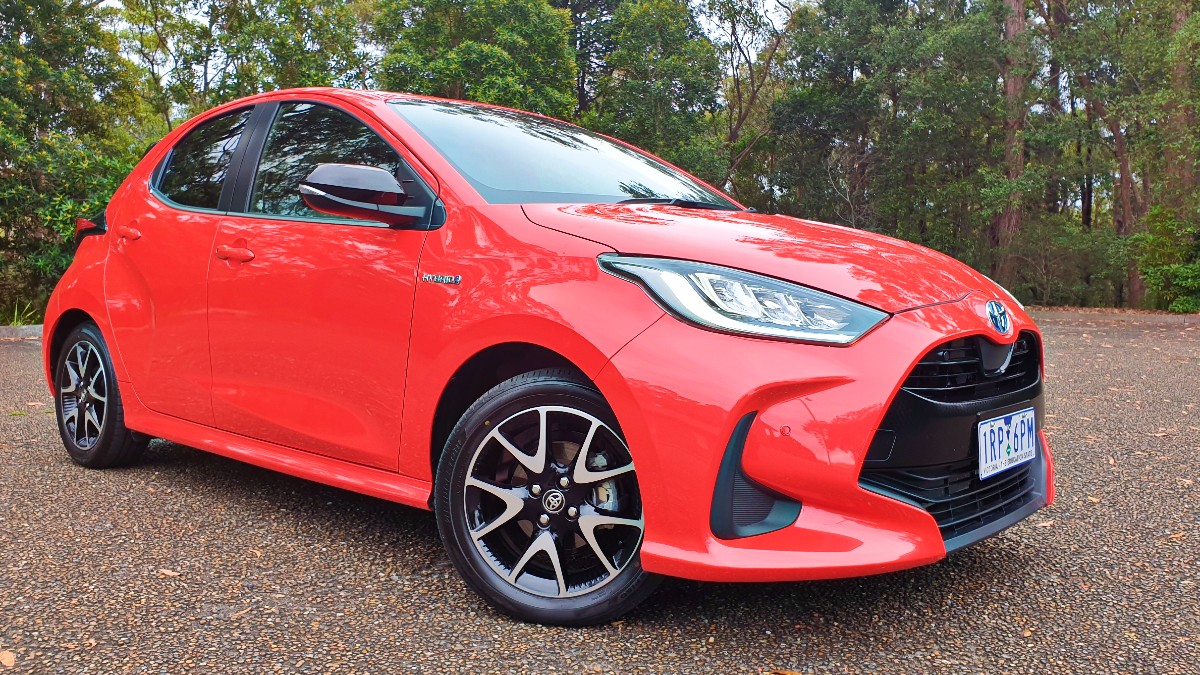 If anyone says Toyota isn’t the industry leader in hybrid tech for cars, they’re wrong.

They pioneered the SUV, made four-door, 4×4 utes the must have car and lead the world in hybrid smarts.

It’s taken a bit of time, but now their baby car, the Yaris aka Starlet aka Echo, now comes with a hybrid drivetrain.

It’s also been boosted into the SUV family and given some serious rally cred in the Gazoo Racing garage too.

Yaris follows Corolla with a three-tier offering — Ascent Sport, SX and ZR. We piloted the ZR hybrid and came away, knowing we’d been in a Toyota hybrid. 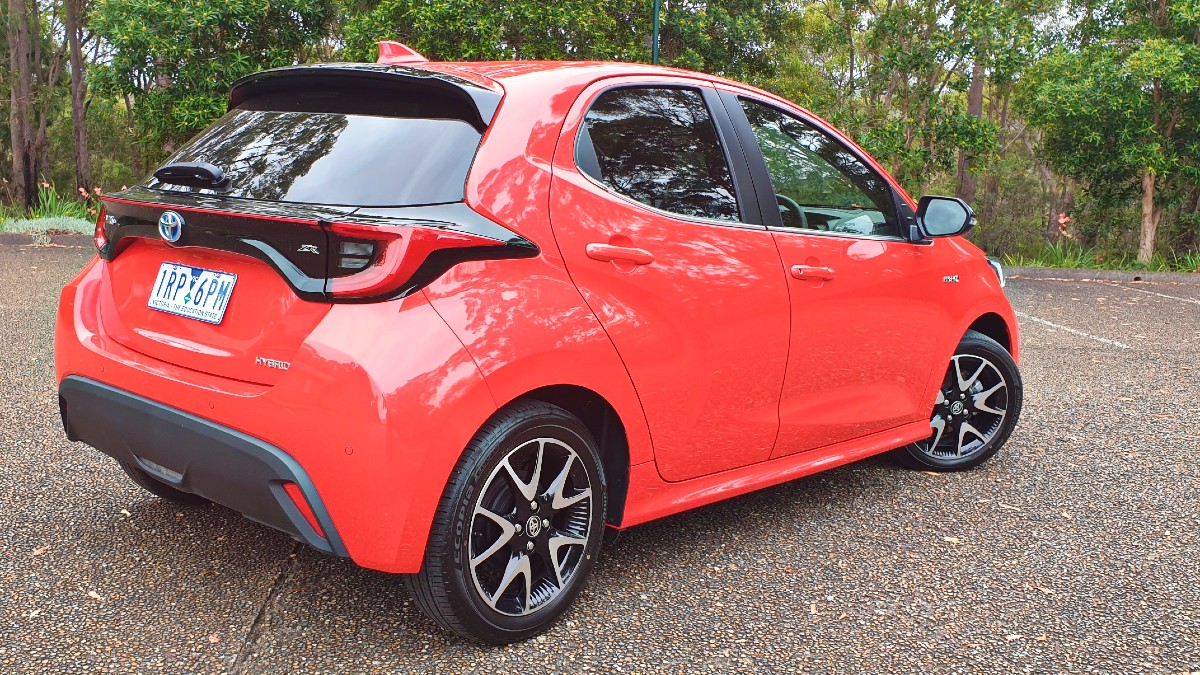 Yaris in Ascent Sport and plain white kicks off at $25,500 no more to pay.

Then there’s the SX and ZR in normal and hybrid varieties, with the Coral version we drove listing at $36,230 — again, driveaway.

Toyota hit the Yaris with a substantial price hike in 2020, with nearly $10K being added.

But . . . there is a Head Up Display, a criminally underrated piece of tech for cars that has its origins in fighter jets.

This projects an image from a section of the dash into the windscreen ahead of the driver.

Depending on the company that fits them to their cars, it’ll show basics such as speed and fuel, to speed zones, radio stations, and more.

The driver dash display is a bit weird too, with a pair of what could be described as eyes popping out either side of the binnacle.

Set back and in between them is a full colour LCD screen that shows the drive situation, with economy and power distribution while under way.

Trim colour for the seats is an interesting choice. There are various shades and shapes of grey, bringing a light and funky style to the hybrid.

But it’s not all techno a-go-go.

The seats are manually operated, not electric,  there’s no USB or 12V socket for the rear seat passengers,  nor is there a wireless charge pad.

And the boot space is a beer carton-friendly, but that’s it 270 litres. Oh, the HUMANITY!

Safety is where the tech, albeit unseen, is at.

Intersection Turn Assistance, Lane Departure Alert, EIGHT airbags, pair up with Lane Trace Assist and Road Sign Assist, plus for the ZR only there is Blind Spot Monitor and Rear Cross Traffic Alert.

The exterior has been given a refresh too, with some sporty elements up front, Bridgestone Ecopia 185/55/18s in the middle, and an assertively styled rear light treatment. 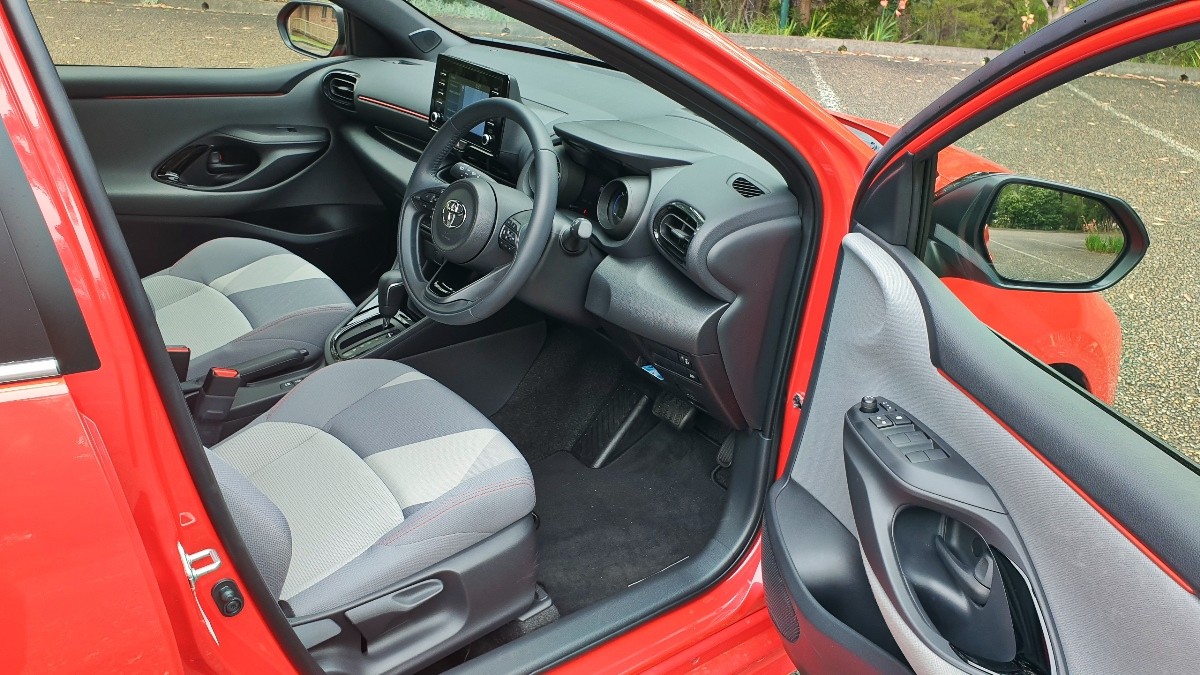 In layman’s terms, it goes well enuff, guv, and has squirt enough to deal with all driving conditions.

It should, considering the petrol part of the equation is a turbocharged three-cylinder engine.

That on its own doesn’t sound impressive but it’s a whopping 1.5 litres in size, compared to many that offer the same configuration at a half litre less.

As such, partnered with a battery system, the whole shebang delivers a total of 85kW and 141Nm to the front wheels via a CVT auto.

Drive in the ZR is selected via a simple and straightforward in-line lever, complete with a B for Braking at the end of the selection line.

This allows a driver to harness more of the kinetic energy that braking lets loose and channels it to the battery.

We say typical Toyota in the sense that there’s foot on brake, press start button and silence erupts.

Engage drive via the small yet so user-friendly dash mounted lever and waft away.

That last bit depends on how hard the accelerator is pressed; go softly and the speedo gets to 25 or 30km/h before the petrol engine kicks in.

Go hard, and like any hybrid, the engine spins up to take over.

Hybrid economy is where the technology wins when dinosaur juice is being sipped.

It readily gets up and boogies when required, is preternaturally quiet when on electric power and is a fine ride and handling package to boot.

One thing to suit many purposes. 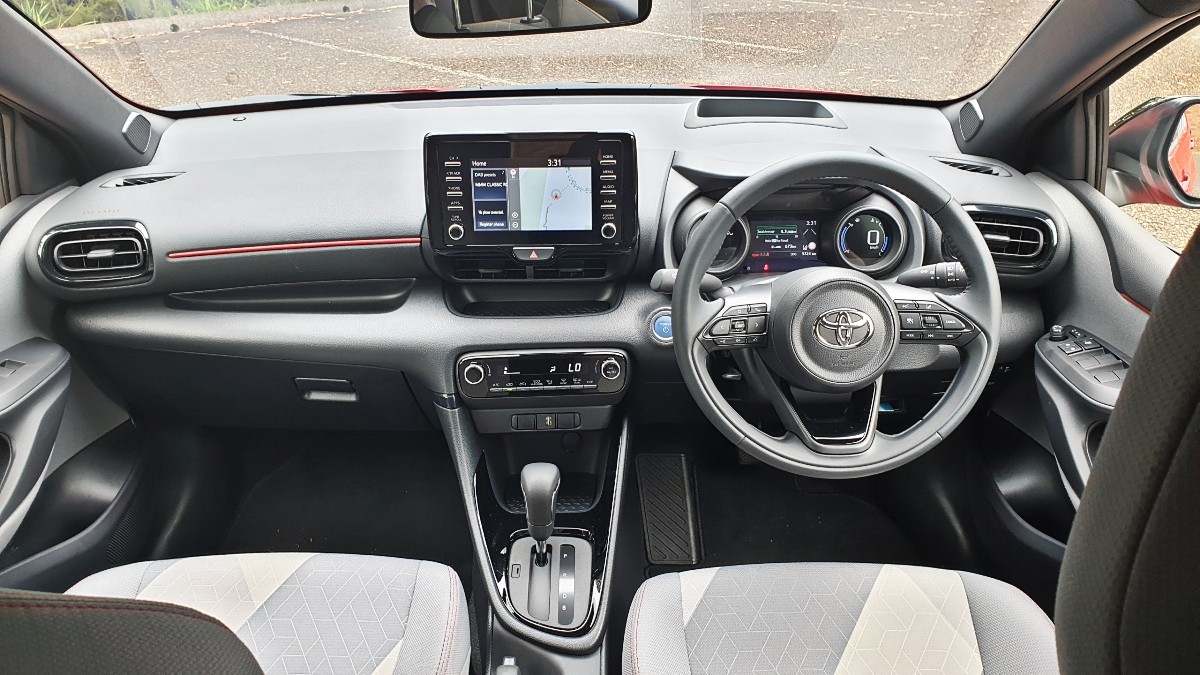 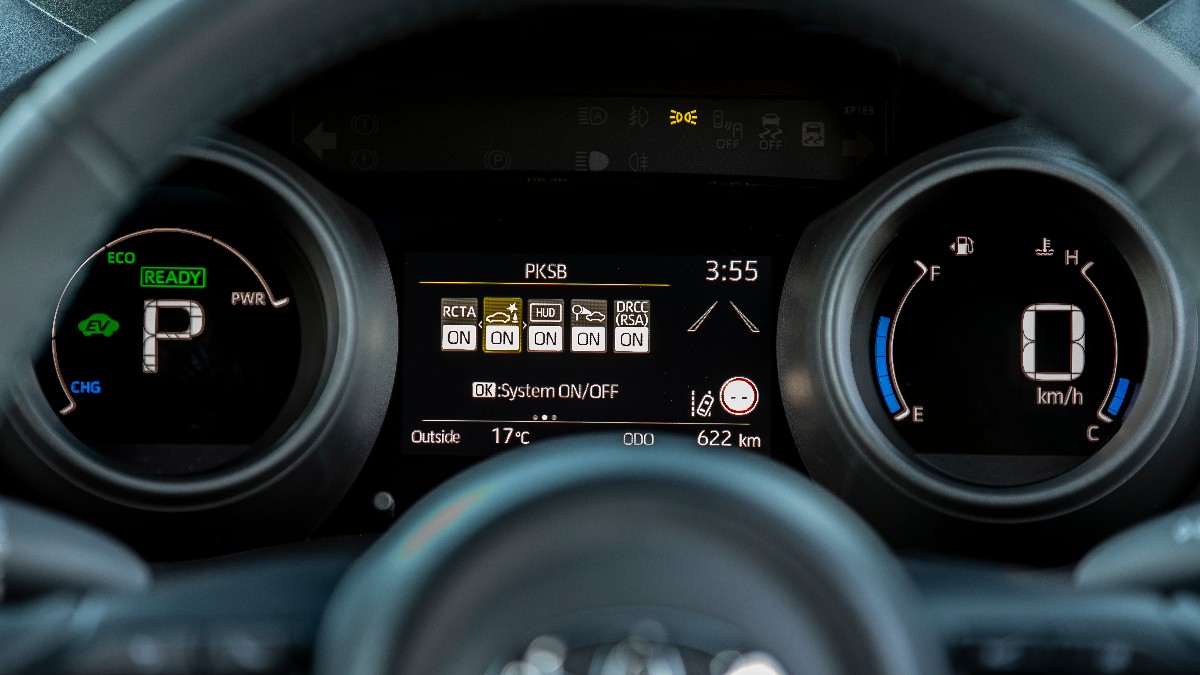 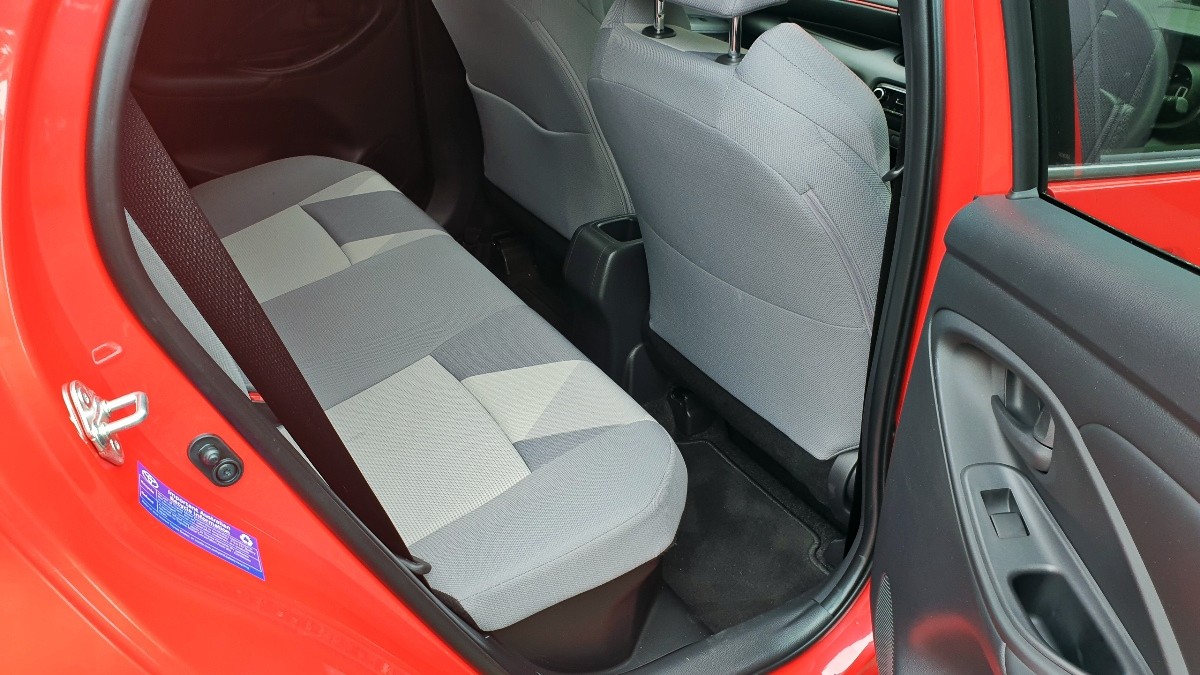 Unlike its competitors from South Korea, Toyota doesn’t suffer from the perception that its vehicles are too expensive. Except, perhaps, in this case

The drive tech is a well proven and sorted package and considering the Yaris hybrid is built around that, and a brand new Kia Stonic GT-Line or even a Corolla Ascent Sport can be had for $30K — it’s a hefty ask! 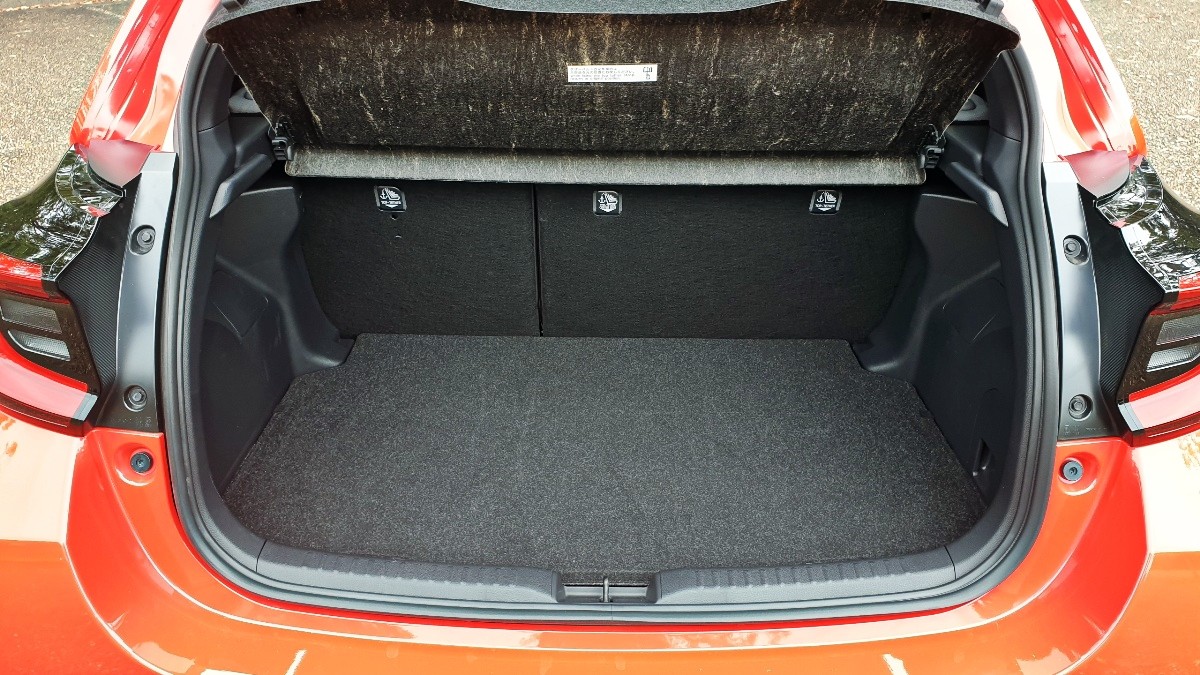 CHECKOUT: Toyota Prius: Funny about that

Check out deals on the Toyota Yaris