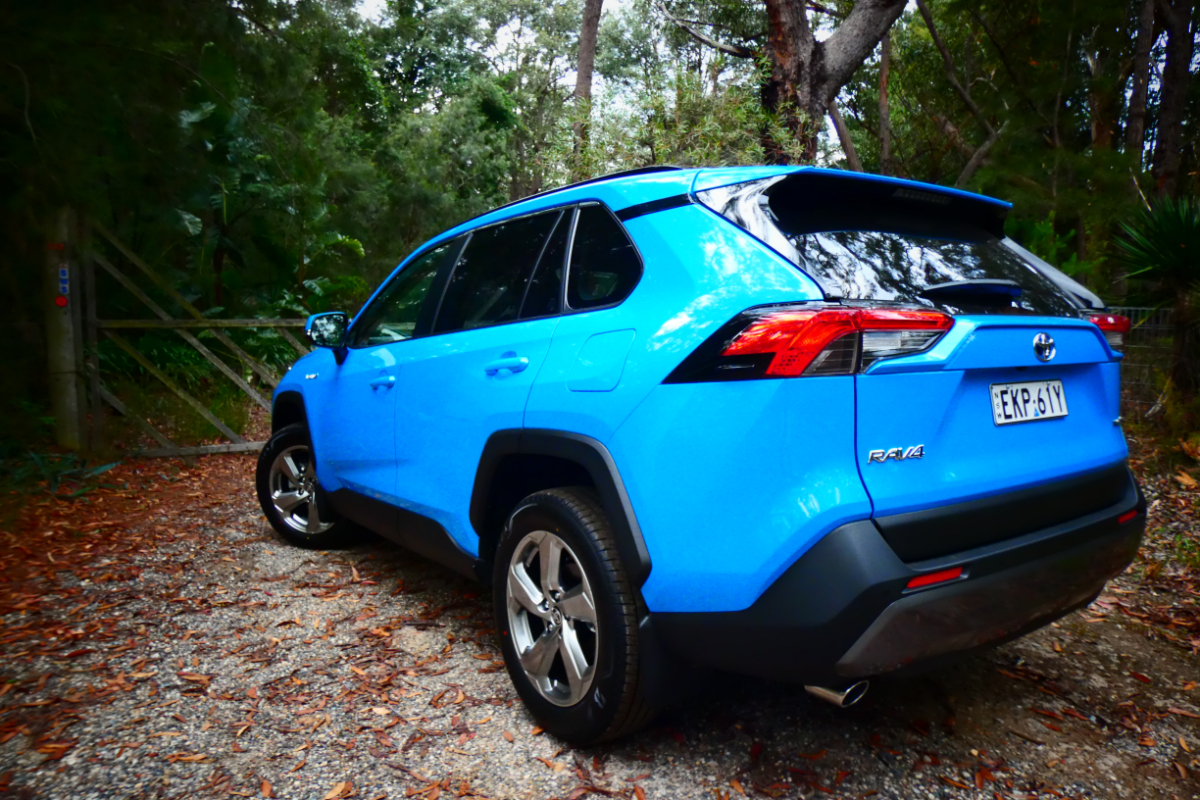 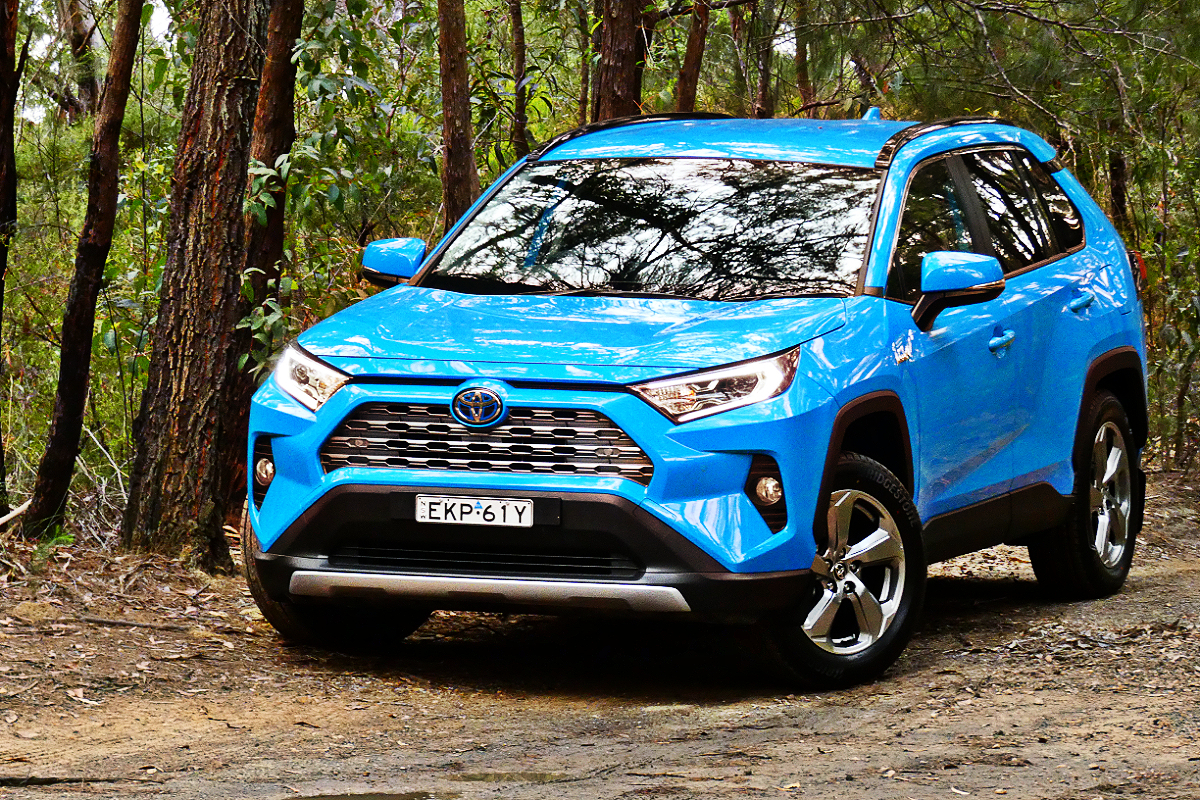 I read somewhere the other day that Toyota’s RAV4 became the biggest selling car in Australia in August.

It outsold the Ford Ranger, Mazda CX-5 and even Toyota’s own Landcruiser — not to mention Corolla and Hilux.

But then, the latest RAV is an impressive offering — particularly the hybrid. 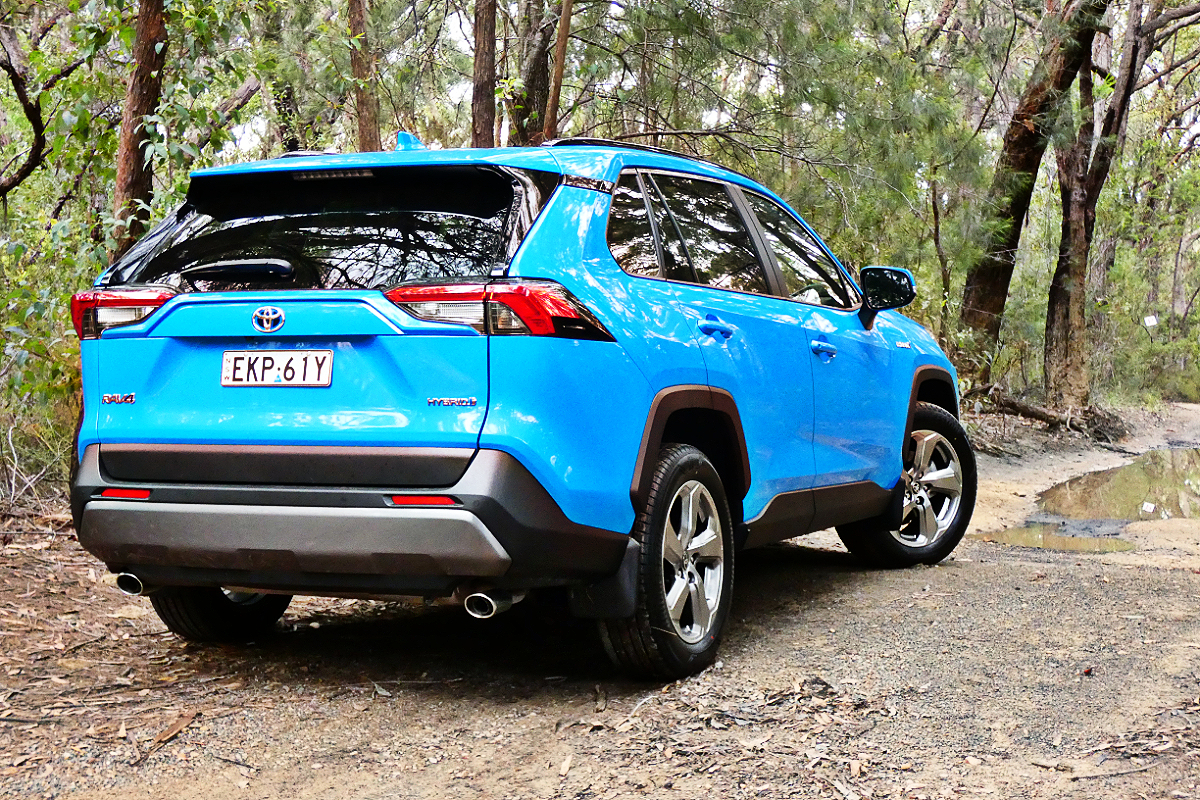 Over and above these are the GXL and Cruiser grades, with the Cruiser Hybrid AWD coming in at $46,415.

It is not, however, top of the line. That distinction goes to the 2.5-litre, petrol-powered, all-wheel drive Edge which tops the range at $48,915.

Our test vehicle was the value for money GXL, hybrid, all-wheel drive — priced from $42,915 plus on-roads. 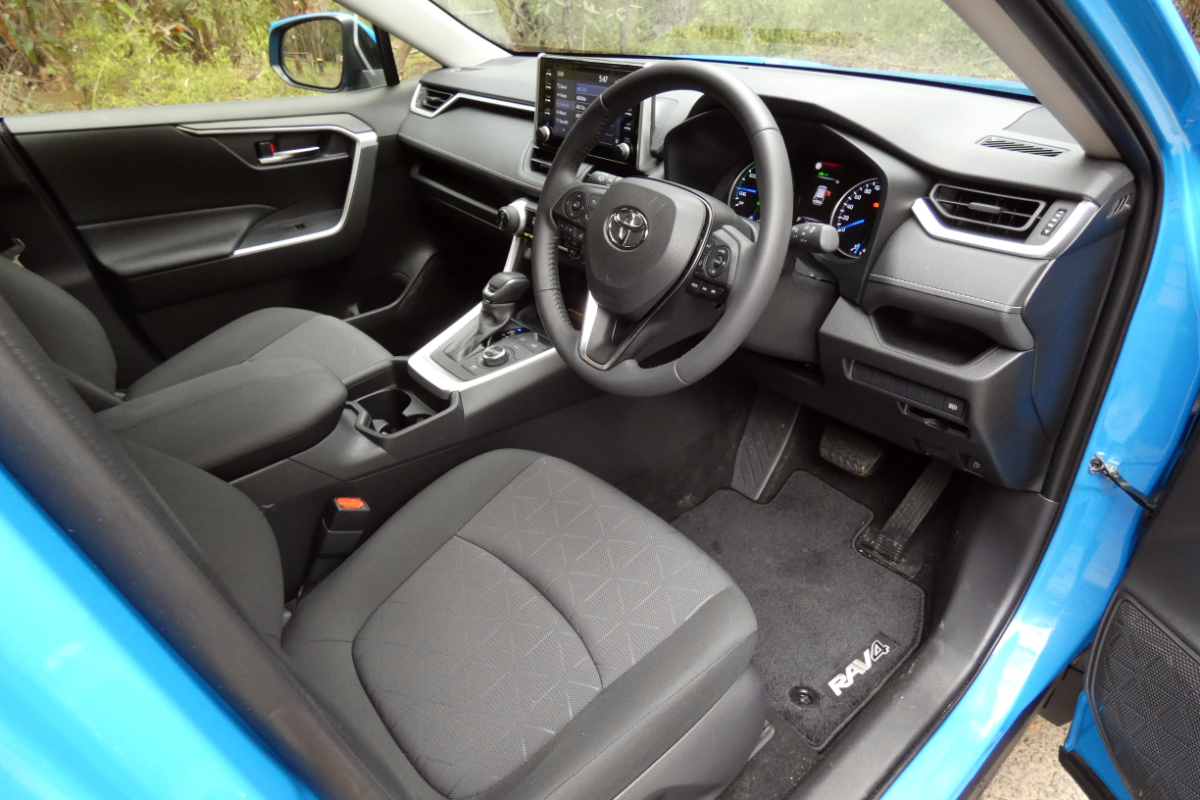 Now in its fifth generation the RAV has grown considerably in size over the years, with the latest version 410mm longer than the original launched in 1994.

In fact, the previous fourth generation was even longer, a full half metre longer — but the latest version has a longer wheelbase (distance between axles) and that means more legroom for passengers.

The standard 2.0-litre direct injection engine offers 127kW and 203Nm and is paired with a continuously variable transmission (CVT) with a launch gear mechanism.

The 2.5-litre petrol engine in the Edge model delivers 152kW and 243Nm through a traditional 8-speed auto.

The hybrid system meanwhile consists of a 2.5-litre Atkinson cycle four-cylinder petrol engine with an electric motor generator that drives through a CVT, providing more power but a little less torque — with combined outputs of 160kW for two- and 163kW for all-wheel drive versions.

Complete with a Trail mode, it enables up to 80 per cent of torque to be channeled to the rear wheels.

The hybrid delivers 4.7L or 4.8L/100km depending on whether its two- or all-wheel drive.

All models have a 55-litre tank and take standard 91 unleaded.

RAV is a five-seater, with plenty of room front and back, cloth trim in the GXL, dual climate control, rear air outlets and reportedly a larger boot than before.

The instrument panel consists of two brightly coloured, traditional analogue dials separated by a coloured information panel, where speed can be displayed digitally and where the current speed limit is also shown.

Centre of the dash is a largish 8.0-inch touchscreen as is the norm.

Below the touchscreen are two air vents and below these controls for the air, with two large, chunky rubberised knobs.

The seats are comfy with manual adjustment and a wheel that is both reach and height adjustable, with surfaces that are soft to touch (at least those you’re liable to touch).

After pushing the start button nothing happens, nothing much anyway. The lights come on and it’s ready to go — there’s just no engine noise.

Move off and the engine soon comes to life, although it will operate in ECV mode initially — it’s how hybrids roll.

Throttle response is quite good, with Sport and Eco modes available via a rotary control in the centre console — EV mode too.

Punch the accelerator, and it surges forward, with a dry, raspy snarl.

Ride and handling are good too, with 225/60 series Bridgestone Alenza rubber fitted to the 18-inch rims.

Together with revised front MacPherson strut and new multi-link rear suspension, it delivers substantially improved dynamics and ride comfort — both on and off road.

The brakes occasionally emit a dry scraping sound as a result of the regenerative brake system that feeds power back to the batteries.

The new platform adds another 65mm of load space, with a class-leading 580 litres, and the load area features a clever two-level reversible floor for added functionality (not available with full-size spare wheel option).

All things considered, the hybrid is a standout package with its performance and economy.

We clocked up almost 600km in our week behind the wheel, city and highway at a real world rate of 5.6L/100km.

And, according to the trip computer, we still had 185km remaining in the tank — how good’s that! 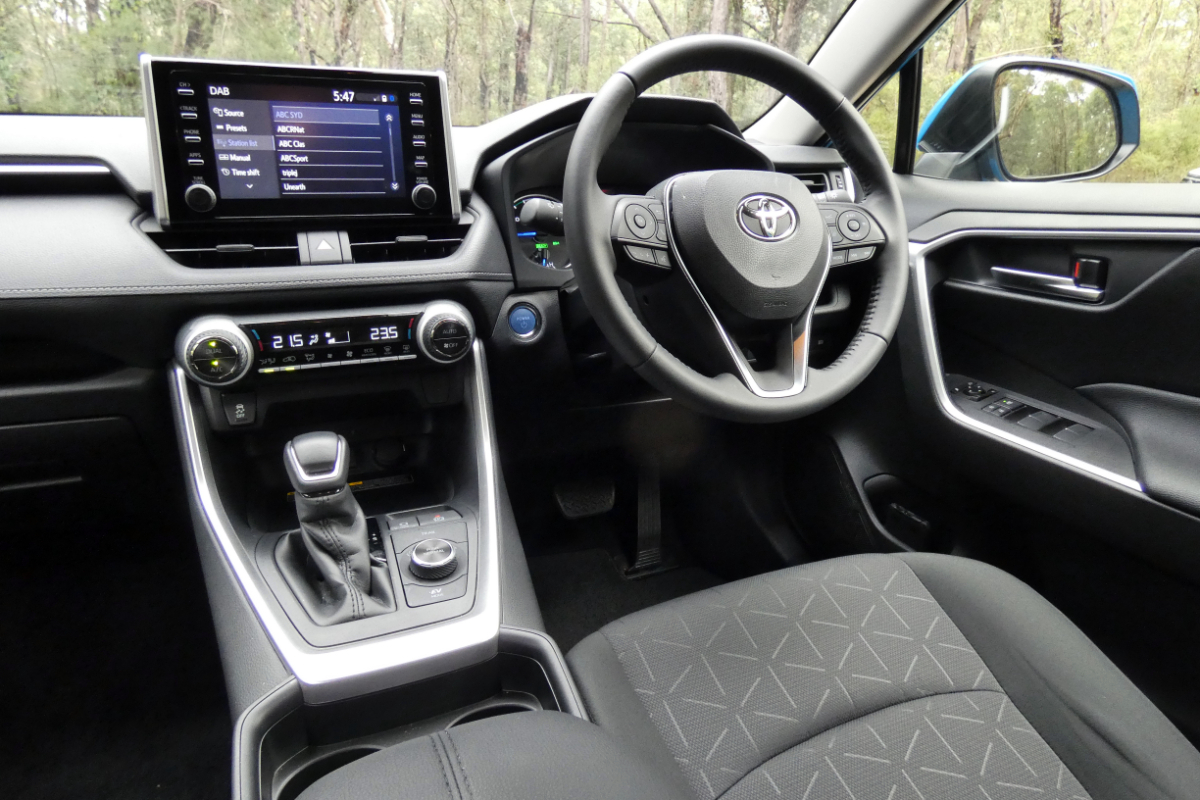 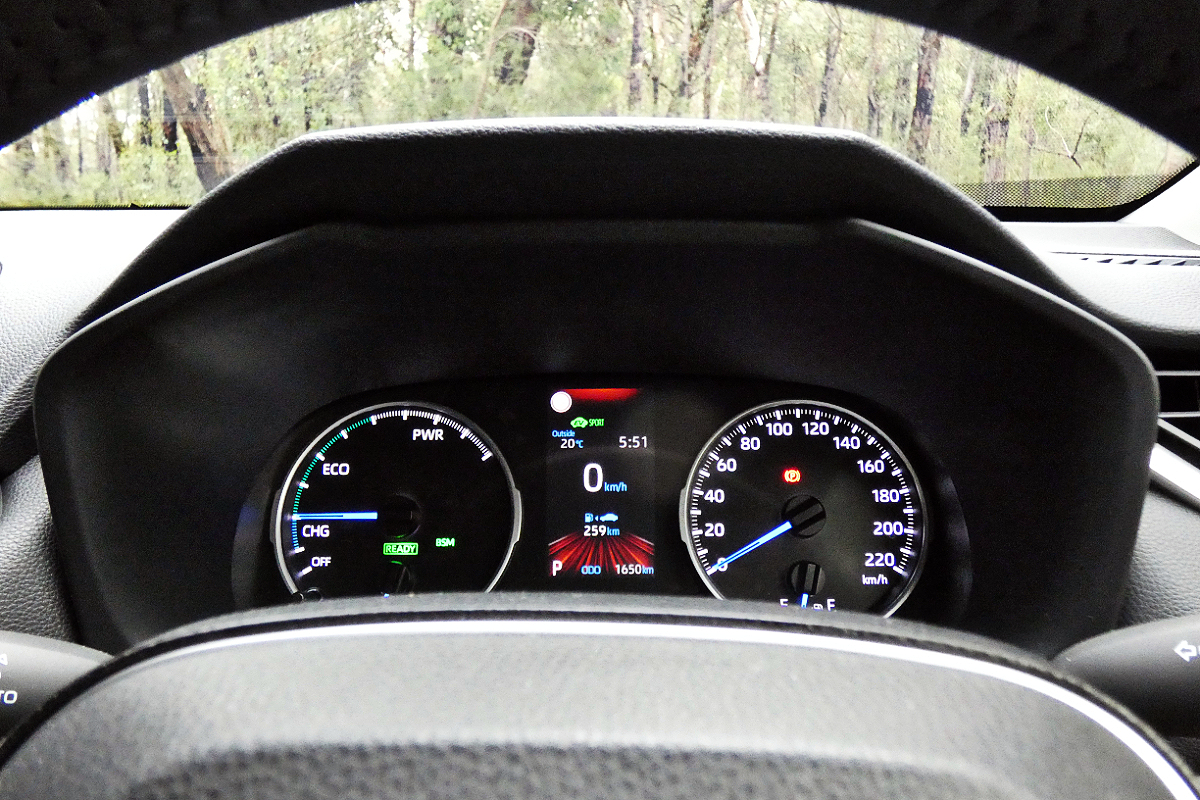 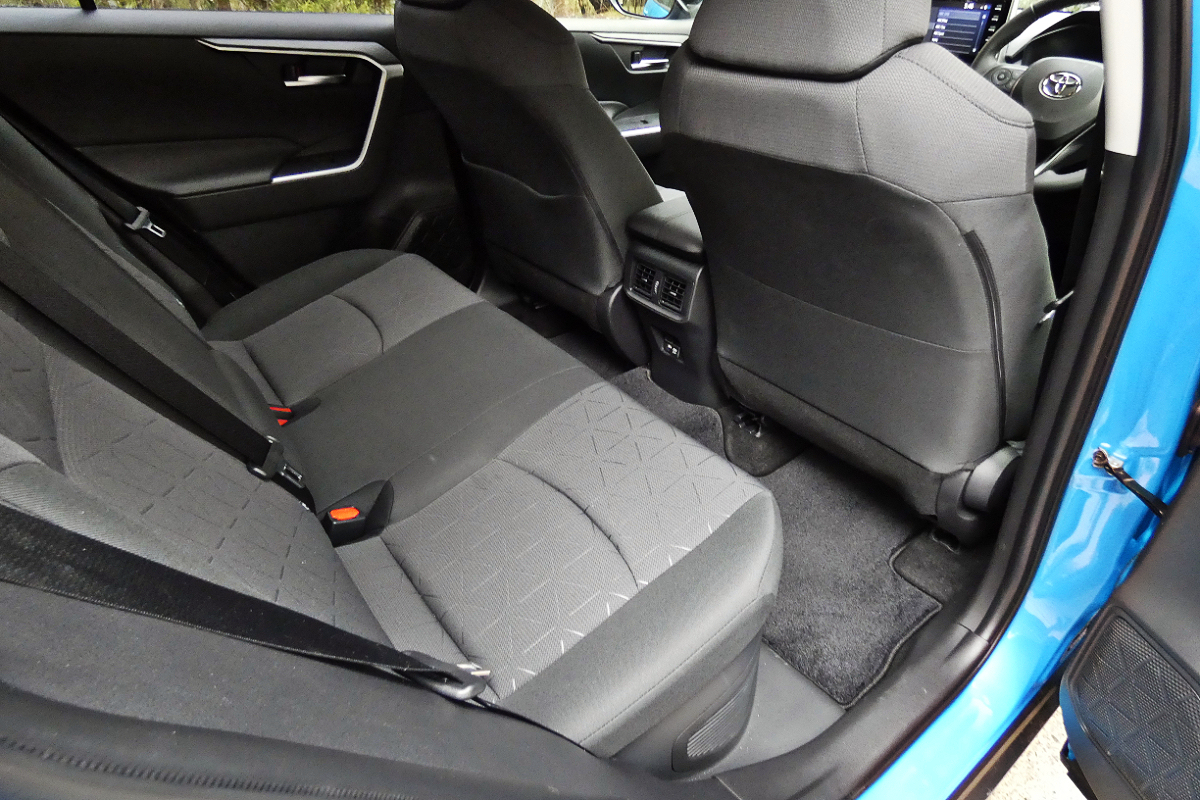 RAV is the complete package.

It’s got the looks, the performance and the fuel economy, and will take some beating.

Friends have just bought the hybrid, so I’ll be interested to get their feedback on the long-term experience.

And here’s something you probably didn’t know. In Europe it’s sold as a Suzuki — to help Zook meet fleet-wide CO2 targets. 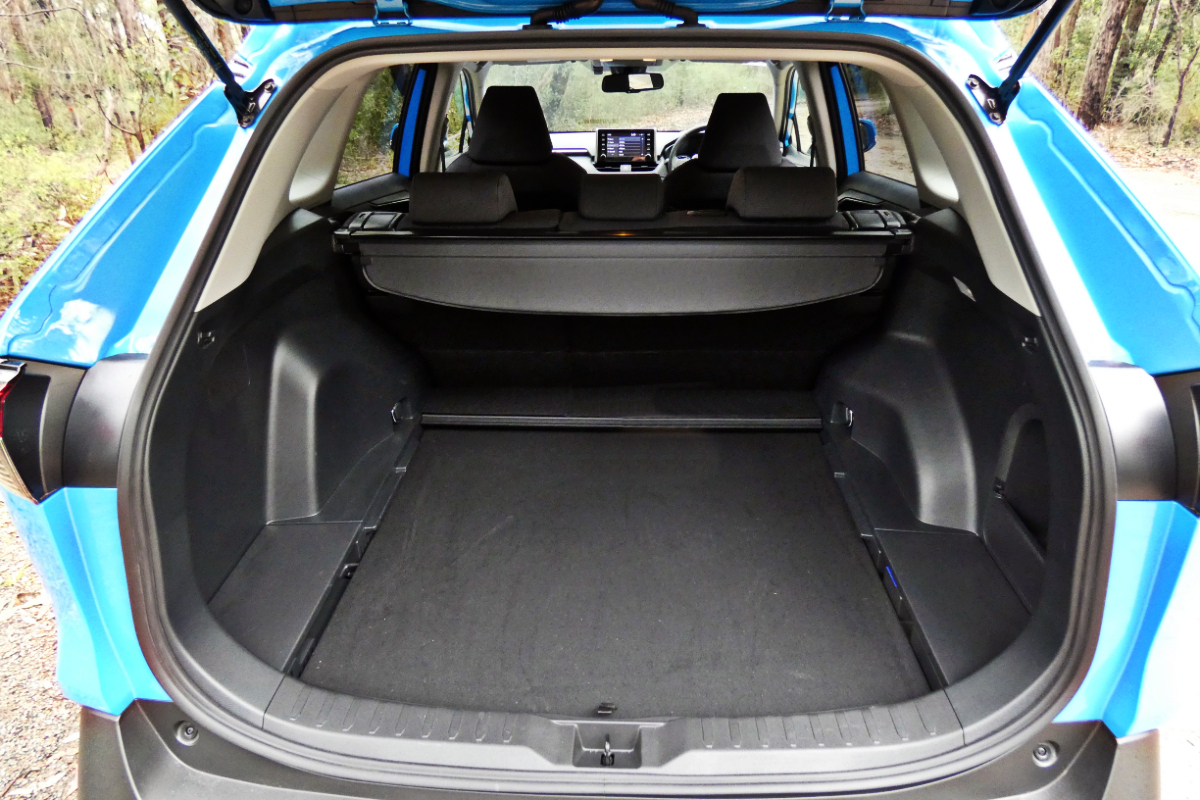