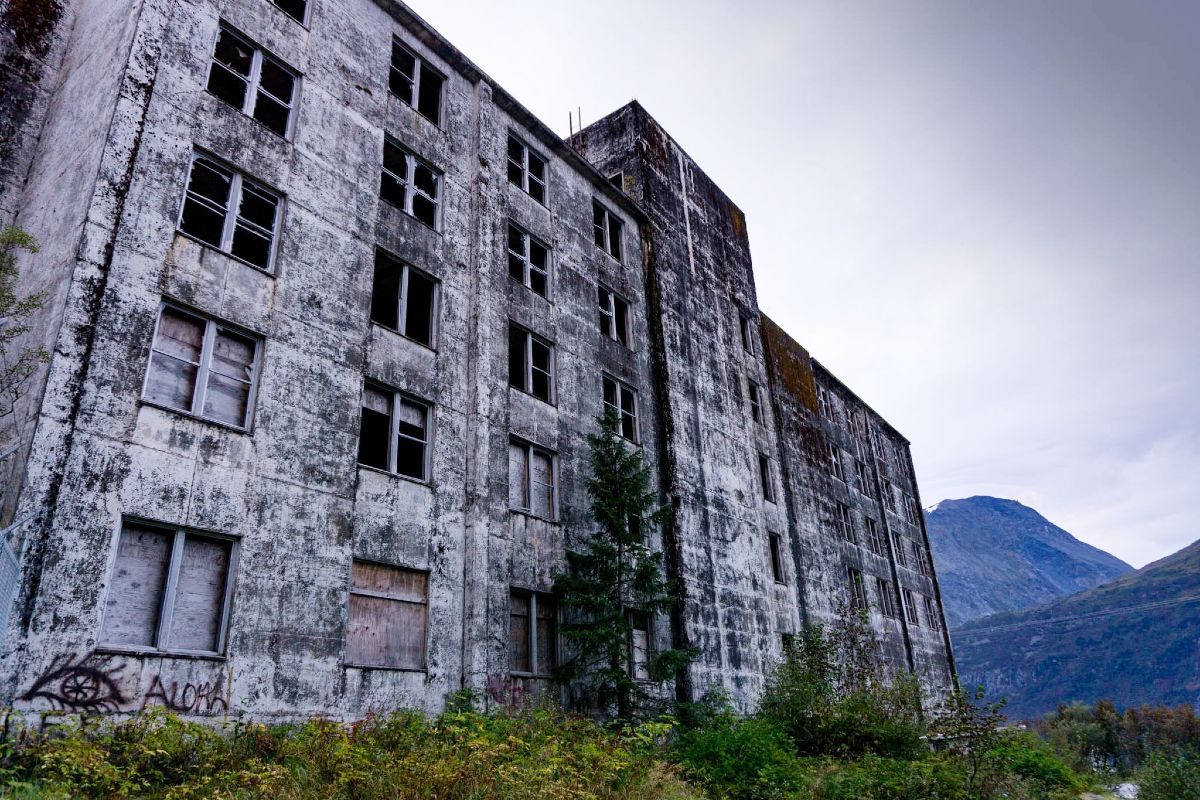 Look no further than Whittier, Alaska, where it snows every day for six months of the year — and rains for the remaining six months.

But what really sets the picturesque small town on the western tip of Alaska apart, is that all of its 220 inhabitants live in the one building.

It’s called Begich Towers, a unit-like complex that not only houses the town’s residents, but most of the businesses and services as well.

An entire community lives under the same roof.

It served as a military base in WWII but is now mainly a fishing base and a port for cruise ships.

Daily life here is said to resemble life in other small American towns, but for the most part, living in a one-building community is a singular experience.

By late March 2020, the coronavirus pandemic sweeping the globe caused a US nationwide quarantine due to the highly contagious nature of the disease.

For a town like Whittier, however, the threat of the virus was more daunting.

To prevent a potential outbreak that could quickly and unwittingly infect residents, the city closed itself to any outside visitors, allowing in only residents, their caregivers and employees of essential businesses.

During the summer of 2020, however, the coronavirus finally hit the community.

Two waterfront workers tested positive, as well as 11 temporary workers — but the cases were all contained.

In August, a family of six who shared an apartment tested positive, but isolated themselves and no one else in the building appeared to have contracted the virus after a two-week quarantine period.

With all you could need under one roof, some residents haven’t felt the urge to leave Begich Towers in weeks or — in some cases — years.

“For me, it’s just home. For the most part, you know everybody. It’s a community under one roof. We have everything we need.”

Whittier is not an easy town to breeze in and out of.

A train tunnel was built in WWII but several years ago it was converted into a tunnel for cars.

Before that, boat travel was really the only way to get in and out.

Now, however, cars can move freely in and out of town, with some exceptions.

Given that the tunnel caters only for single lane traffic, and is roughly 4km long, (the second-longest highway tunnel in North America), cars going in the same direction are allowed through in 30-minute intervals.

A red light alerts drivers at the opposite end to stop and wait until the interval is up before it’s their turn to proceed.

But it’s not open around the clock. If you try to use the tunnel after 11:00 at night or before 5:30 in the morning, you’ll likely find it closed.

People who missed the cutoff are often spotted sleeping in their cars at either end of the tunnel.

There is, incidentally, always someone on duty should an emergency vehicle need to get through.

Considering both its unique character and natural beauty, Whittier attracts its share of tourists.

Most are understandably curious to see just how an entire town manages to live peaceably under one roof.

The top two floors are a bed and breakfast, by far the swankiest digs in town.

There’s no Main Street or municipal buildings in Whittier; such things would be a logistical impossibility.

Instead, the majority of the city’s services are located on the first floor.

The school is connected to Begich Towers via an underground tunnel.

For the residents of Whittier, going to school or work rarely requires even leaving the house.

There is a church in the basement: The Whittier Christian Community Church offers twice-weekly services, and there’s also a Samoan church that shares the same space.

“Most people in town, particularly on the harbour side, seem to have binoculars,” one  resident said.

It  makes sense, considering the abundant wild and marine life within view of the building.

“A lot of people keep them there to watch whales breaching and mountain goats grazing and things like that,” he said.

“But June Miller always told us that binoculars are basically for finding out if your husband’s at the bar.”

In some ways, being in Whittier is like being in another world or the North Pole.

Across the street, one Whittier resident keeps her two pet reindeer.

Brenda Tolman tends to them every day, twice a day, regardless of the weather.

Known as the Good Friday Earthquake, it was the single biggest seismic event in US history.

It spawned a massive tsunami that killed 13 Whittier residents.

The quake caused extensive destruction throughout the town, with a final damage tally of US$10 million.

The town remained undeveloped until WWII.

Before that, the area was named after a glacier that sat in the waters around the town.

The glacier, in turn, was named after a poet, John Greenleaf Whittier, who was famous for his themes of anti-slavery.

The massive Alaskan province itself used to be Russian-owned, but was sold the the US in 1867, for US$7.2 million. equating to about 2 cents per acre.

The land is twice the size of Texas, totalling some 152 billion hectares.

And right at the western tip of it, is Whittier, the coolest city on earth.