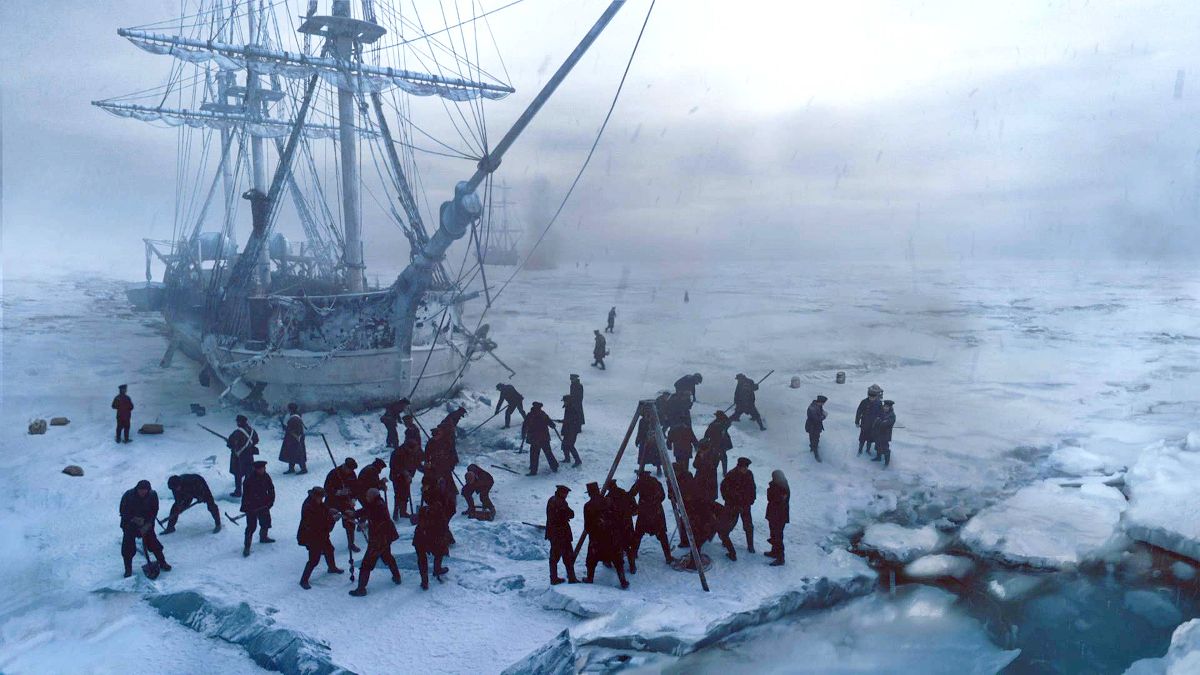 Home
Time out
Watch it
The Terror: Trapped in the ice with a man-eating monster

Things just go from bad to worse when two ships become stuck in the ice while trying to find the fabled Northwest Passage in the 1840s.

With not enough food to survive the harsh Arctic winter, they must set out on foot across the ice or face death from cold and starvation.

Throw in a gigantic, heard but not seen beast, that tears men apart and you have The Terror, a 2018 horror anthology.

It’s based on a book by Dan Simmons and is a fictionalized account of Sir John Franklin‘s lost expedition to the Arctic in 1845–1848.

The first season is anyway.

Season one begins with the Royal Navy‘s polar exploration ships HMS Erebus and HMS Terror which heading south into unchartered territory after leaving Beechey Island in the Canadian Arctic Archipelago.

The expedition runs into difficulty when a collision with an iceberg damages Erebus‘s propeller.

Captain of the Terror and second-in-command of the expedition, Francis Crozier, becomes concerned about being stranded in the pack ice and recommends they shift the men from Erebus to Terror and steam south to avoid becoming trapped over winter.

But the driven, stiff upper lip Franklin overrules Crozier’s concerns and decides to press on, heading further west in the belief the ships can complete the passage before the water ices up.

Before the ships can reach open water, however, they become frozen and trapped.

The party that treks east finds nothing, but the party heading west ventures into dangerous territory and accidentally shoots an indigenous Inuit man — mistaking him for a polar bear.

During the ensuing chaos, a massive, unseen creature kills their lieutenant, Graham Gore.

The survivors flee with the wounded Inuit and his daughter.

The man turns out to be a powerful shaman or medicine man, but cannot speak because he doesn’t have a tongue.

He makes his daughter understand after he is dead responsibility for controlling the “Tuunbaq” falls to her (it’s the name the Indians have for the creature).

The story has an Edgar Allan Poe feel to it, with an atmosphere that is charged with menace and foreboding, not only from the Tuunbaq — but also the mutinous crew who take matters into their own hands.

After they run out of food thoughts turn to cannibalism.

Watch out for the scene where the creature attacks the stranded ship — it’s an absolute cracker.

Producers thought it would be necessary to refrigerate the sound stage to simulate arctic conditions in Budapest where the series was shot, but it was so cold there they didn’t need to in the end.

All scenes inside the ships are shot tilted, due to the fact that sailors are subjected to the movements of the sea and can rarely stand upright.

As the frost progresses and projects the ships upward, angles on shots get more and more acute.

Sweet River: Billins doesn’t want to give up its dead

One a side note, towards the end of shooting the uniformed cast came across a car accident on the return to their hotel.

They rushed to help the injured motorists, unaware of how hideous they appeared in their costumes.

As they reached out to assist the injured, they were met with screams of terror from the injured who believed the ghostly figures were their ancestors who had come to help them cross over.

The second season of The Terror is set in a Japanese internment camp on the west coast of the United States during World War II.

It revolves around the Japanese folklore of bakemono, “an uncanny spectre that menaces a Japanese-American community from its home in Southern California to the internment camps to the war in the Pacific”.

Each season consists of 10 episodes and can be seen on Amazon Prime.

CHECKOUT: Ghost Stories: The brain sees what it wants to see

The Terror is a slow-burn horror series that will have you coming back for more.