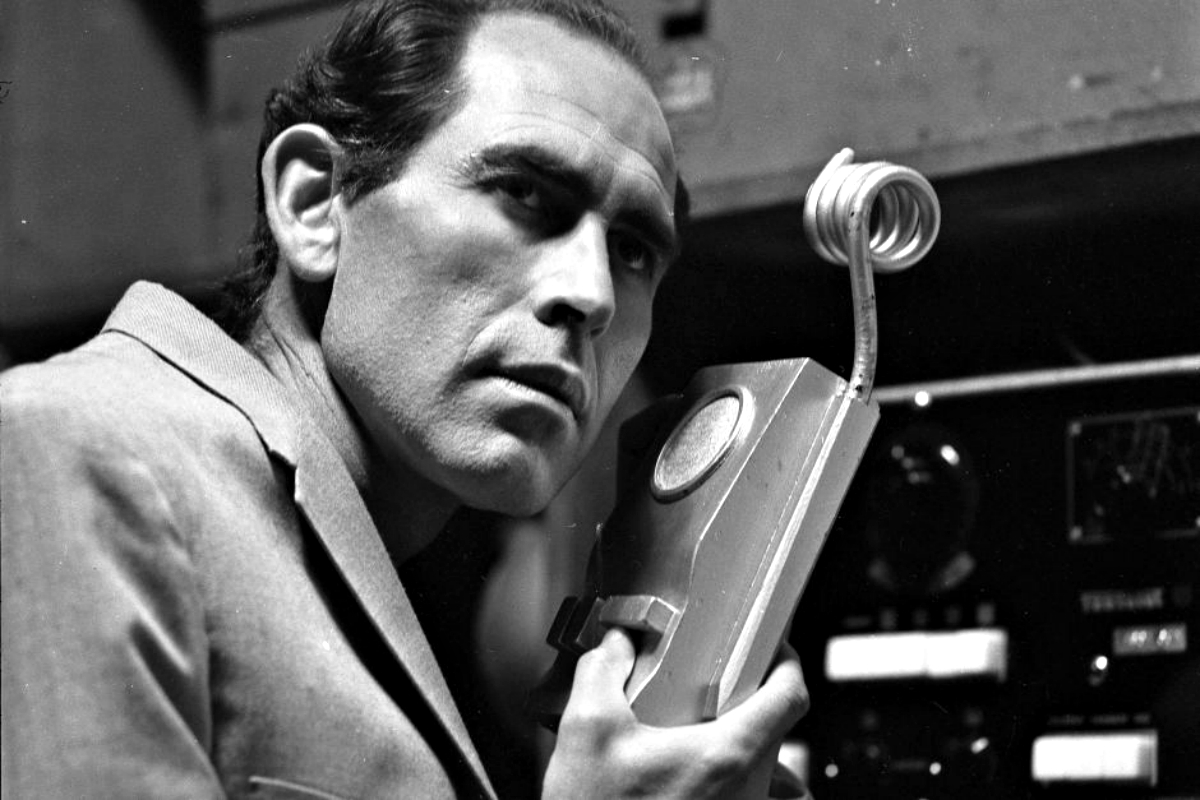 Ron Haddrick as "The Stranger".
Watch it
2 min read

The Stranger: Aliens, Rafferty and Reg Livermore too!

Home
Time out
Watch it
The Stranger: Aliens, Rafferty and Reg Livermore too!

Is that . . . could that be . . . a young Reg Livermore? Yes, indeedy. Way, way back in 1964, a 24-year-old Livermore made one of his first television appearances in an ABC Television program called The Stranger.

It was a children’s television sci-fi series, about visitors from another planet, produced between 1964 and 1965, and was a hit here and overseas where it was sold to the BBC.

In the opening scenes it’s a rainy night, there’s a knock at the door and a schoolmaster finds a man unconscious on his doorstep.

He takes the man in, gives him a job and he becomes friends with the headmaster’s kids, Bernard and Jean, and their mate Peter.

The stranger, Adam, is joined later by another alien, Varossa.

Back on their world, Soshuniss, they don’t have books and are forced to memorise everything.

The Stranger was written by New Zealand-born author G K Saunders, produced by Storry Walton and directed by Gil Brealey, with production design by Geoffrey Wedlock.

The series starred stage and radio actor Ron Haddrick as “The Stranger”, Adam Suisse, and Reg Livermore as Varossa.

The children were played by Jan Dinnen and Bill Levis as Jean and Bernie Walsh and Mike Thomas as their friend Peter Cannon.

The series was made with cooperation from the CSIRO and some scenes shot on location at the Parkes Observatory.

The producers also sought the help of consulted CSIRO for the design of the alien spacecraft that lands — get this — on the steps of Sydney Town Hall.

Here the aliens are greeted by the Prime Minister, played by none other than Aussie screen legend Chips Rafferty.

Other actors who made appearances include Max Phipps (Mad Max 2), John Fegan (Homicide) and Judy Nunn (The Box).

Also of note, is the unique language that the aliens speak which was devised for the show.

Some draw comparisons with between The Stranger and Dr Who that was produced around the same time.

For instance the alien spacecraft is larger inside than out, just like the TARDIS.

But producer and director Storry Walton said they were created too close to each other to have influenced one another.

“I think it was just one of those accidents of history — parallel history,” Walton said.

“What they had in common was the rather clunky attempts at representing scientific equipment and spaceships.

“What we had going for us is that we used real people and entirely plausible ideas. We consulted CSIRO on what a spaceship should look like and they were very helpful.

“The most important thing about the Australian series is that it had breadth — it had a lot of outdoor stuff. Dr Who was entirely studio-based.

“I was determined that ours was not going to be just studio-based. I wanted to have the scene of the countryside and the suburbs and so-forth to give it space and reality.”

The crew were also allowed to film on the steps of Sydney’s Town Hall and take over parts of what was then Australia’s Parliament House.

“Robert Menzies, the prime minister at the time, gave us permission to use his own office,” Walton said.

“I thought that was remarkable and we had a lot of fun with that too.”

The good news is that the entire series has been digitally remastered by the ABC and can now be seen on  iview and the ABC TV & iview YouTube channel.