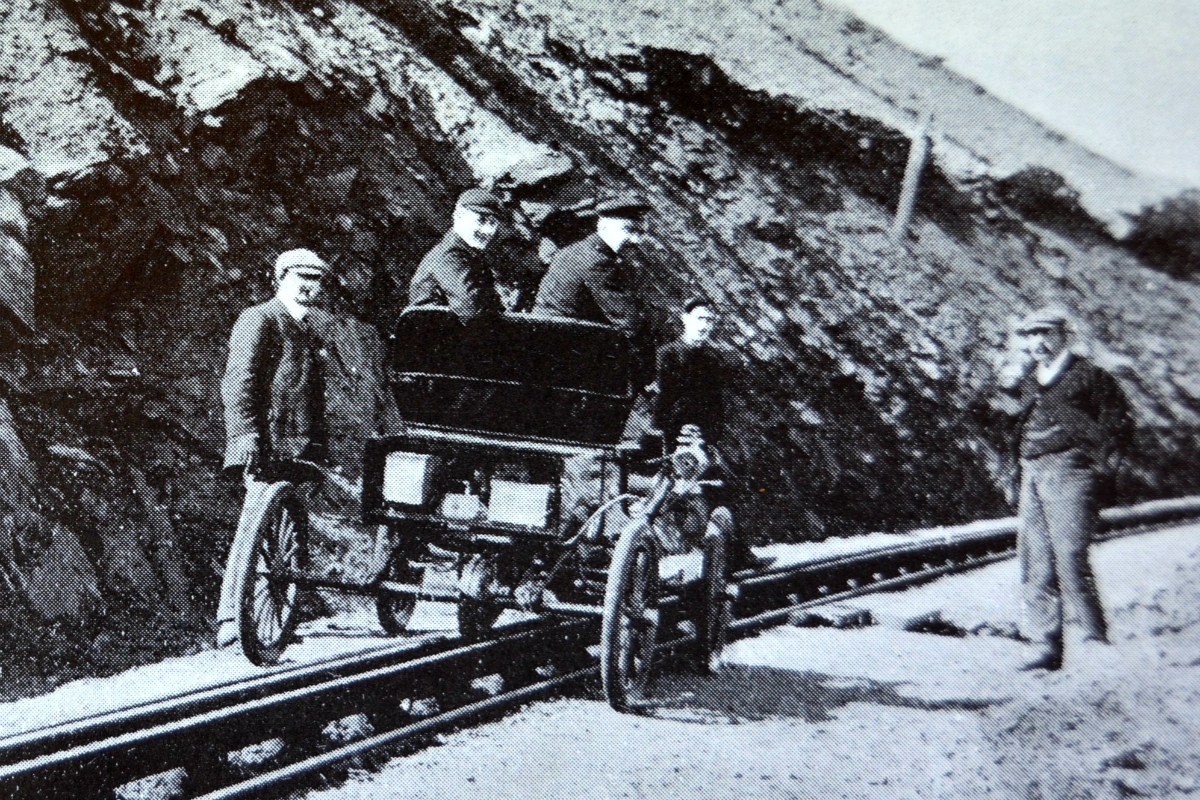 Imagine if Top Gear was on TV in 1904, and Clarkson, Hammond and May were given the challenge of seeing who could reach the top of Wales’ highest mountain, Snowdon, first.

Clarkson would – naturally – drive a car, while his two sidekicks took the alternative route — in this case a train.

Well, back then, William Letts played the Clarkson role driving a 5hp Oldsmobile with the Stig’s great great grandfather alongside.

In the pioneering days of motoring, feats of bravado were often carried out in the interests of progress, performance and publicity.

In 1900, William Malesbury Letts (1873-1957), a director of the Locomobile Company of Great Britain, conceived the idea of taking a car and climbing Snowdon, but for some time the idea remained just that.

Then in 1902, Letts joined forces with British racing driver and businessman Charles Jarrott (1877-1944) to establish the car import firm of Charles Jarrott & Letts Ltd, agents for Oldsmobile, Napier and De Dietrich, and the idea looked more likely to become a reality.

A date was set but fate dealt a blow to Lett’s plan when a business trip to America took longer than anticipated and by the time he returned, Harvey du Cros, the MD of the Ariel and Swift motor companies, in May 1904 had become the first man (at his second attempt) to ascend Snowdon in a 15hp Ariel.

Undaunted, Letts still wanted to tackle the climb up Snowdon, which is located in what is now the Snowdonia National Park.

But to make the adventure more of a challenge, he opted to use a 5hp Curved Dash Oldsmobile.

So, a plan was made for Letts and Jarrott to follow the track of the Snowdonia Mountain Tram Road, which had been opened In 1896 to carry passengers the 7.6km from Llanberis to the summit station.

However, the task was made difficult because of the Oldsmobile’s track width and the danger of the differential hitting the tram track’s rack rail.

“Whilst the wheels of one side of the car had ample room on the ballast side of the track, the two wheels on the other side were dangerously near the edge of the ballast, a position of considerable risk and one which almost led at one stage to an accident, the results of which one can only imagine,” Letts recalled afterwards.

So, around 06h30 on June, 6 1904, a small gathering assembled at the Llanberis terminus to tackle the ascent of Snowdon.

Just before 07h00 the Oldsmobile set off with Letts driving although Jarrott, who in 1900 became a partner in the UK agency for Panhard et Levassor, had successfully raced from 1900 to 1904, during which time he won the 1902 Circuit des Ardennes and competed in the 1903 and 1904 Gordon Bennett Cup races.

Incidentally, in 1905, he was amongst those who founded the Automobile Association (AA) and was later to become chairman.

The Olds set off at a smart pace heading towards a viaduct and waterfall and the first gradient was 1-in-8, which was easily overcome.

A special tram had been assigned to follow the Olds’ progress and render any assistance necessary, but it was left behind as the little Olds easily snaked its way through the numerous sharp bends.

The chasm by the waterfall left no margin for error and once through this daunting part of the track, Letts and Jarrott continued to be jolted along as the car rode over the sleepers towards the next station, Hebron, situated 2.5km from the start and more than 300 metres above sea level.

A brief stop was necessary to physically lift the 390kg car over the rail track’s points.

The journey time so far was 14 minutes.

Next stop was ‘Half Way’, which was reached 15 minutes later and offered a panoramic view of the island of Anglesey and the shores of Cardigan Bay from Holyhead to Aberystwyth.

But back on the track, a 1-in-6 gradient had to be tackled on the approach to Bwlch Penn Llyn, 2.8km from the summit, where a 40-minute stop was taken for photography of the Llanberis Pass and Clogwyn Coch.

The Olds had performed faultlessly, with not a hint of overheating, and continued with a number of photo-stops along the way.

Occasionally, planks had to be placed over culverts that guided water from the mountain into the valleys below.

Gradients were getting steeper – 1-in-5 – and the track even bumpier, Letts and Jarrott having to hold on for fear of falling out as the Olds rode over the endless line of sleepers.

Eventually, the landlord of the Snowden Summit Hotel and his family and staff could be seen standing on a precipice “shouting a hearty Welsh welcome to the darling motorists” as the completely standard Curved Dash Oldsmobile reached the wind-blown summit, way ahead of the tram, the services of which were not required.

To the accompaniment of cheers and applause, Letts and Jarrott alighted to receive handshakes from all present.

The ascent had taken 90 minutes, but after deducting stoppages the actual running time was 57 minutes.

The 3,7kW 1560cc single-horizontal-cylinder engine, which peaks at a mere 800rpm, used only three litres of fuel and hardly any water.

After some refreshing coffee, to cap the achievement, Letts then took the car from the end of the train line to the very top of Snowdon, the highest point ever reached on the mountain by a motor car.

A superb accomplishment, and one that typified the derring-do – and bold marketing ideas – of motoring’s pioneers.

Certainly, looking at the Curved Dash Olds that is part of the Franschhoek Motor Museum’s collection in South Africa, it’s amazing to think that such a relatively frail-looking vehicle managed to rock ’n roll its way along a tram track up a mountain almost 120 years ago without a hitch.

As Clarkson would have said: “Once again it proves that the car is the best way to get from A to B.”

At 1085 metres above sea level, Snowdon is the highest point in the British Isles, outside of the Scottish Highlands.

It is the the third most visited attraction in Wales, and designated as a national nature reserve for its rare flora and fauna.

The steep cliff faces attract rock climbers, and the mountain was once used by Edmund Hillary in training for the 1953 ascent of Mount Everest.

Today, however, the summit can be reached by a number of (less challenging!) means.