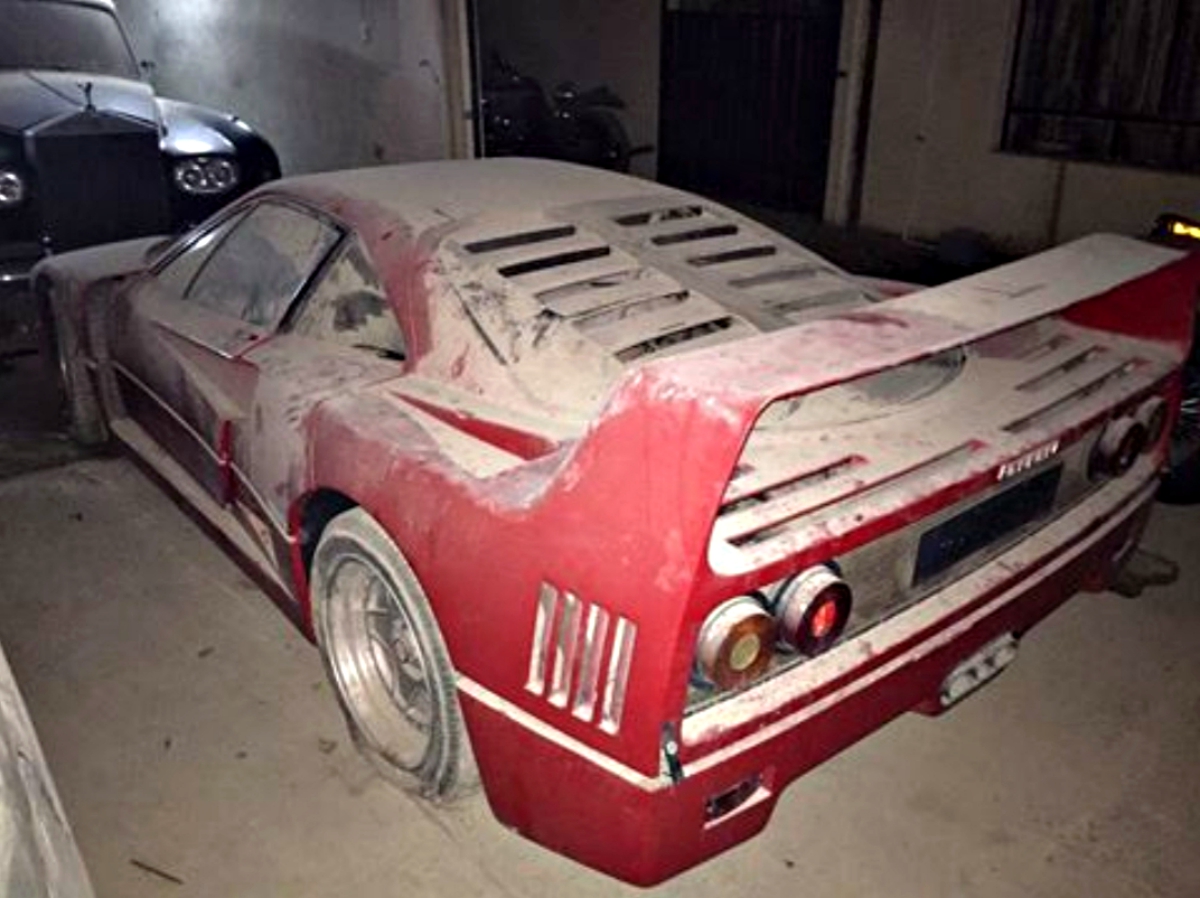 A VERY rare Ferrari, an F40, that once belonged to Saddam Hussein’s nutcase son, Uday, has finally been found.

The hunt started a while ago by a Ferrari enthusiast known only as Ratarossa after he (or she) had heard of its existence.

The fact that it’s actually been found is just a bit short of a miracle, and the car could rightly be dubbed ‘the one that got away.’

That’s because Saddam himself set fire to Uday’s vast collection of exotic cars after a series of blatant murders by his first-born.

It started at a dinner party in 1988, when even before dessert was served, Uday got up, shot and killed Saddam’s personal valet.

The valet had introduced Saddam to a hottie that the Iraqi dictator took a fancy to, much to the displeasure of Mrs Hussein — and apparently Uday as well.

That was followed in 1990 by another shooting at dinner party when Uday opened fire on several guests, killing an unknown number.

Saddam thought he had to teach Uday a lesson, so he put a match to his collection of exotic cars.

How many were incinerated is not known, but it is said to be ‘hundreds’ – mostly Rolls-Royces, Ferraris and Porsches — plus at least one Lambo.

Details are in a book by author Will Bardenwerper with the snappy title of The Prisoner in His Palace: Saddam Hussein, His American Guards, and What History Leaves Unsaid.

“I was very angry with him so I burned all his cars,” Saddam said.

Uday must have parked the F40 elsewhere, because it’s apparently the only car that escaped his daddy’s anger.

Uday had a history of being a naughty boy, some of his deeds included jailing and torturing Iraqi athletes who didn’t meet his expectations.

He was chairman of the Iraqi Olympic Committee and the Iraq Football Association.

He also founded his own sports club called Al-Rasheed and signed all the best players from the country to play for his team, which went on to dominate Iraqi football until their dissolution in 1990.

He was also clever and obtained a Bachelor of Engineering from the University of Baghdad and a doctorate in political science.

Not that he studied much, or was particularly gifted, but his tutors quickly learnt that to give the lad poor marks would have a very detrimental effect on their health and well being.

He also became the editor of the Babel newspaper, the general secretary of the Iraqi Union of Students and the head of the Iraq Journalists Union.

As well, he had a television channel, Youth TV, which aired reports not usually heard on Iraq’s state-run media.

The nation’s most popular radio station was Voice of Youth, also owned by Uday, the only radio that played Western music.

Saddam Hussein met his maker in 2006 when he was hanged for crimes against humanity at Camp Justice, an Iraqi army base in Kadhimiya.

He had argued that as a military leader he should be executed by firing squad as was the military custom.

Uday, brother Qusay, and Qusay’s 14-year-old son Mustapha died in 2003 during a raid on a home in the northern Iraqi city of Mosul.

The expensive F40, was among the first cars with carbon fibre and kevlar components.

The engine and mechanical parts were by Nicola Materazzi and the design was the work of Leonardo Fioravanti.

Displayed at the Frankfurt Motor Show in 1987, the Berlinetta was a stunner, although perhaps not as well suited to the desert as a twin-hump camel — but in its favour was its top (tarmac) speed 324km/h – and air conditioning.

The car was found in poor condition in a shed in Erbil in Iraqi Kurdistan.

It had some years earlier been sent to Turkey for servicing, but the then owner couldn’t pay the bill, so the Turks kept the car for a while until the account was settled.

But quite a few vital parts were missing.

But there’s a ‘buyer beware’ bit: Uday’s sister, Raghad, still alive and living in Jordan, took to Twitter threatening to sue anyone who takes possession of her family’s stuff.

“We will prosecute everyone who has acquired the family’s personal property, this and other things,” she threatened, adding that “we warn others not to engage in these matters for any reason because they will be subject to legal accountability.”