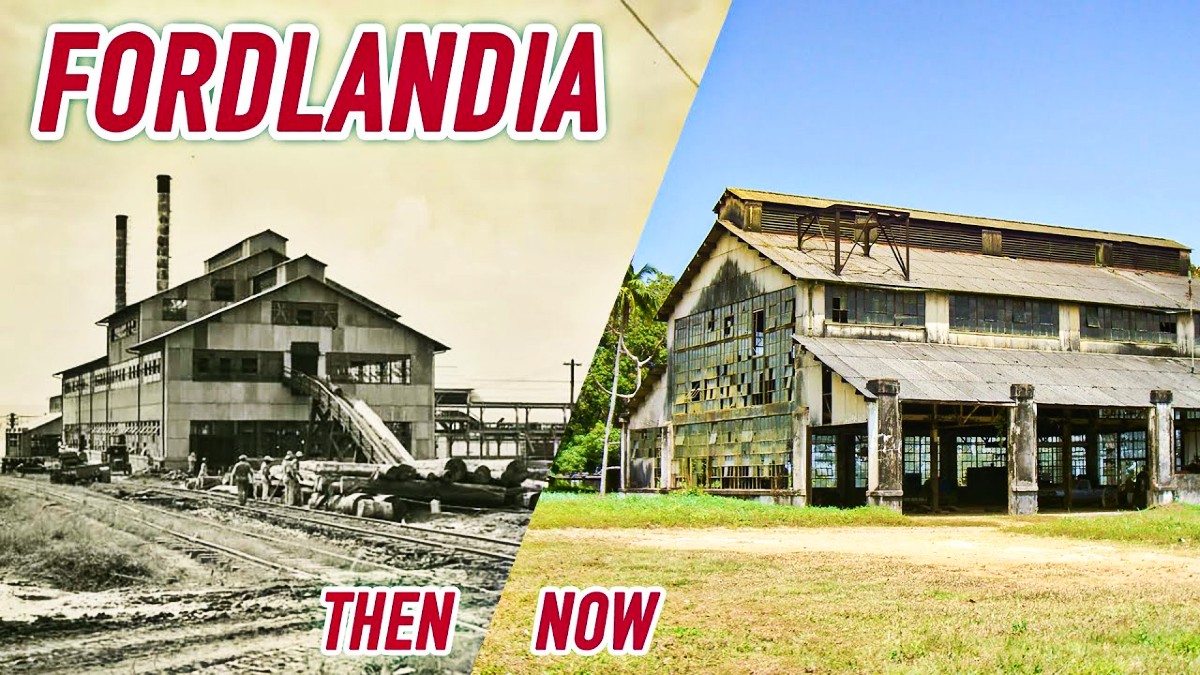 HENRY Ford was quite a guy.

More than a pioneer of the US motor industry, he has also been credited as the original maker of soy milk (in the 1920s), charcoal briquettes in the 1930s, plus a version of what we know today as tofu.

In the late 1930s he also a used a process called chemurgy to make plastic from plants. To prove its effectiveness, in 1941 he built a vehicle with a body made of soybeans.

But it’s not widely known that he also built an entire town in the Brazilian jungle, now sometimes referred to as ‘one of the world’s strangest lost cities.’

Back in 1927, Henry Ford came up with the idea of creating a factory town attached to its own rubber plantation in Brazil.

He figured that would let him produce two million tyres a year from Brazil’s abundance of rubber trees and, at the same time, help the ‘uncivilised jungle people’ as he called the natives, by employing them in what would be the first fully planned modern American city in the Amazon.

“We are not going to South America to make money, but to help develop that wonderful and fertile land,” Ford said.

At the time, Britain had the monopoly on Sri Lankan rubber and it was driving up costs for his new Model A cars, so he wanted to find a cheaper source of latex that would allow Ford Motor Company to produce its own tyres.

His goal was also to bring a better future to a forgotten part of the planet. That city would bear his name: Fordlandia.

Ford took pride in the fair treatment of his staff, and even from 1914 ensured all Ford workers would receive a daily salary of $5 — a very decent wage at the time.

But from the start things in Brazil did not run nearly as smoothly as his cars.

Clearing the native forest was backbreaking work, but eventually up went rows of Michigan-designed homes, dining halls, a school, a hospital, a church, a recreation centre, a community pool, a theatre to screen Hollywood movies, a golf course, a sawmill, and a powerhouse to deliver electricity to the entire town.

For Brazilians who had never had electricity or indoor plumbing, Fordlandia was a place of undreamt of luxury.

But the rubber deal became a big problem.

The Amazon basin was once the world’s sole source of rubber, supplying industrialised Britain and the US with the material.

Then English explorer Henry Wickham smuggled thousands of rubber seeds out of Brazil to his homeland.

Britain then planted the seeds in its then colony of Ceylon (now Sri Lanka), where the rubber crops, free from the insects that infected them in Brazil, thrived.

In next to no time Britain had replaced Brazil as monarch of the rubber trade.

That was something Ford wanted to change. He’d rather produce his own rubber for his cars to run on than import from Britain.

With all those trees in Brazil, how could he go wrong?

But he didn’t bother to consult a botanist when planting the seedlings in his newly-cleared land.

They were planted during the hot and dry season, and in tight rows away from steady water flow, giving fungi and pests plenty of room to wreak havoc on the young plants.

As a result, leaf blight set in and destroyed the saplings.

The rubber trees produced so little that Fordlandia produced only 750 tonnes of latex,  a far cry from the 38,000 tonnes he expected — none of which ever made it on to a Ford car.

At the town, some social problems arose.

Ford expected his Brazilian workers to follow his own set of rules and labour practices, which included a meatless diet, (he was vegetarian), alcohol was banned, likewise soccer,  and non-Brazilian stuff like square dancing, poetry readings and English singing sessions, were introduced.

Now many workers were accustomed to a tequila or two at day’s end and soccer was their favourite game, so unsurprisingly, some of them soon rebelled.

Some established a bar and a brothel on a nearby island, which caused some concern.

Ultimately, workers clashed with management and a riot erupted, causing a lot of damage.

While battling with the non-productive latex, Ford decided to sell the Amazon wood at a profit, but that too, proved useless.

Soon after, synthetic rubber arrived on the world market, making the main purpose of Fordlandia pointless.

So, sadly, Henry Ford’s grand idea amounted to a painful $US 20 million loss — about $AU 260 million in today’s money.

By the time WWII ended, Henry Ford was in poor health and he died in 1947.

Management of the company fell to his grandson, Henry Ford II, who cut into the company’s ballooning costs by axing underperforming assets. Fordlandia was first to go.

He sold it back to Brazil for a pittance.

The moment news of the sale reached Fordlandia, its American residents headed home, leaving its Brazilian residents wondering what had hit them.

In contrast to the excitement generated around its creation, Fordlandia’s death was a quiet one.

Equipment from the sawmill and generator was left to the elements and vandals over the years, rusting in the Amazon air.

The iconic water tower still stands, though it no longer holds any water, and the Ford logo proudly painted on it has long since faded.

In the past decade, however, Fordlandia has enjoyed something of a renaissance.

After the population languished at under 100 for several decades, it has rebounded to about 3000 residents in recent years.

Most of the original buildings still stand. There’s a local bank, a pharmacy, and a pub called Bar Do Doca.

But no Ford rubber factory.

On fact, Henry Ford himself never visited the place.

CHECKOUT:The car made from soybeans