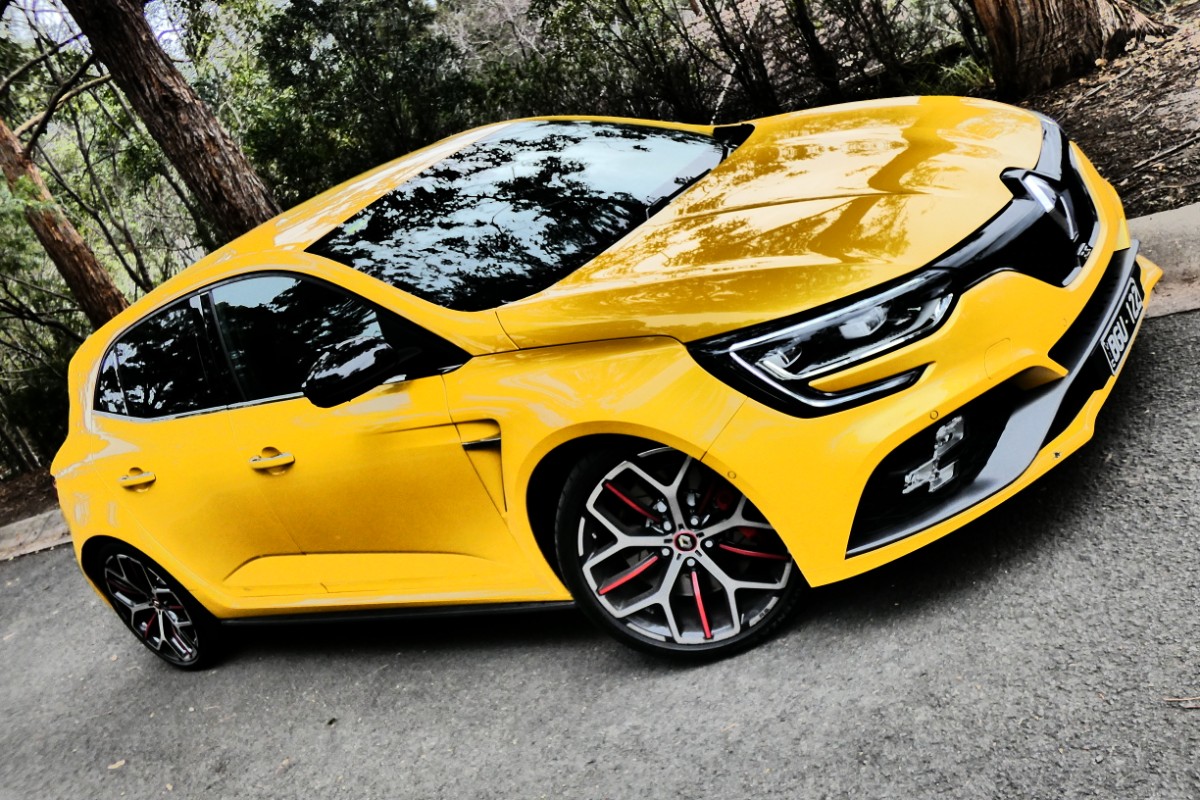 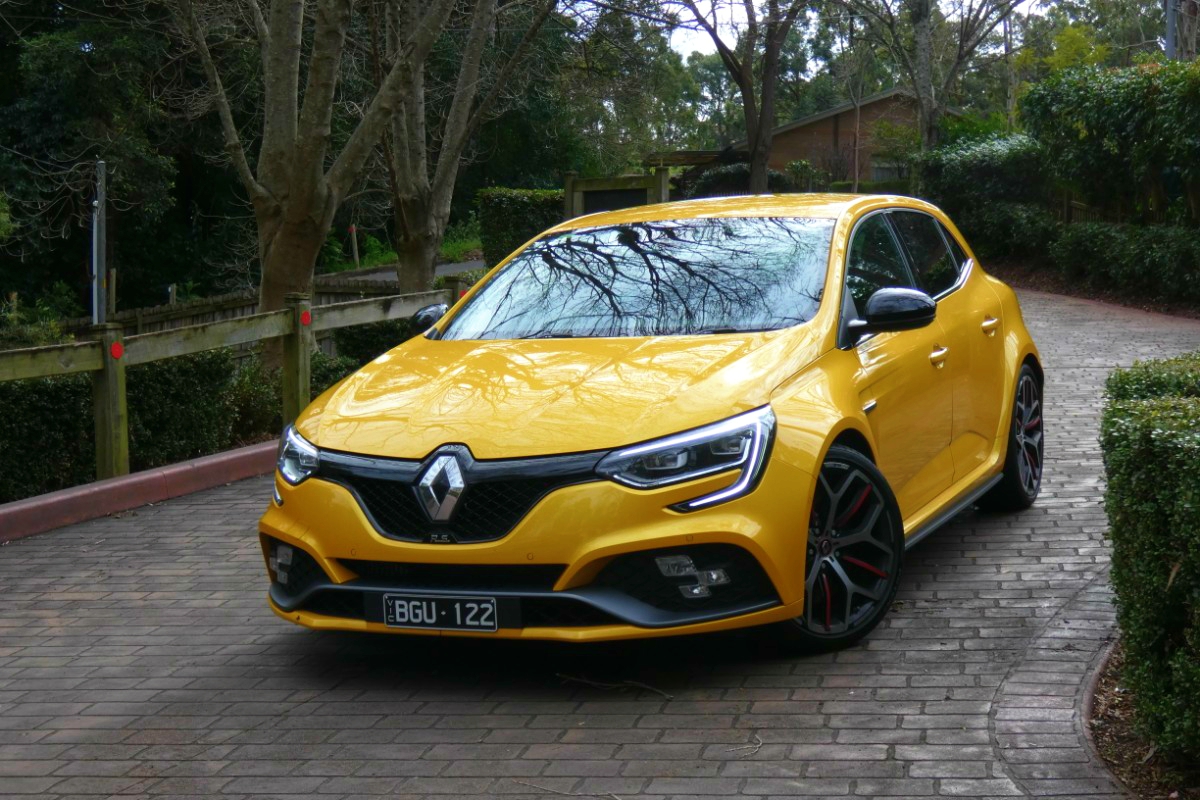 It’s been a while between drinks but the Renault Megane RS is without doubt still the best front-wheel drive car we’ve ever driven, although it has a few challengers these days.

What has changed though is that you can now get one of these hooties with an ‘or-toe-mattock’ and that is the car we chose to drive, along with the screwed down Cup chassis.

It’s made the car accessible to a whole new section of the market — before you had to be keen. 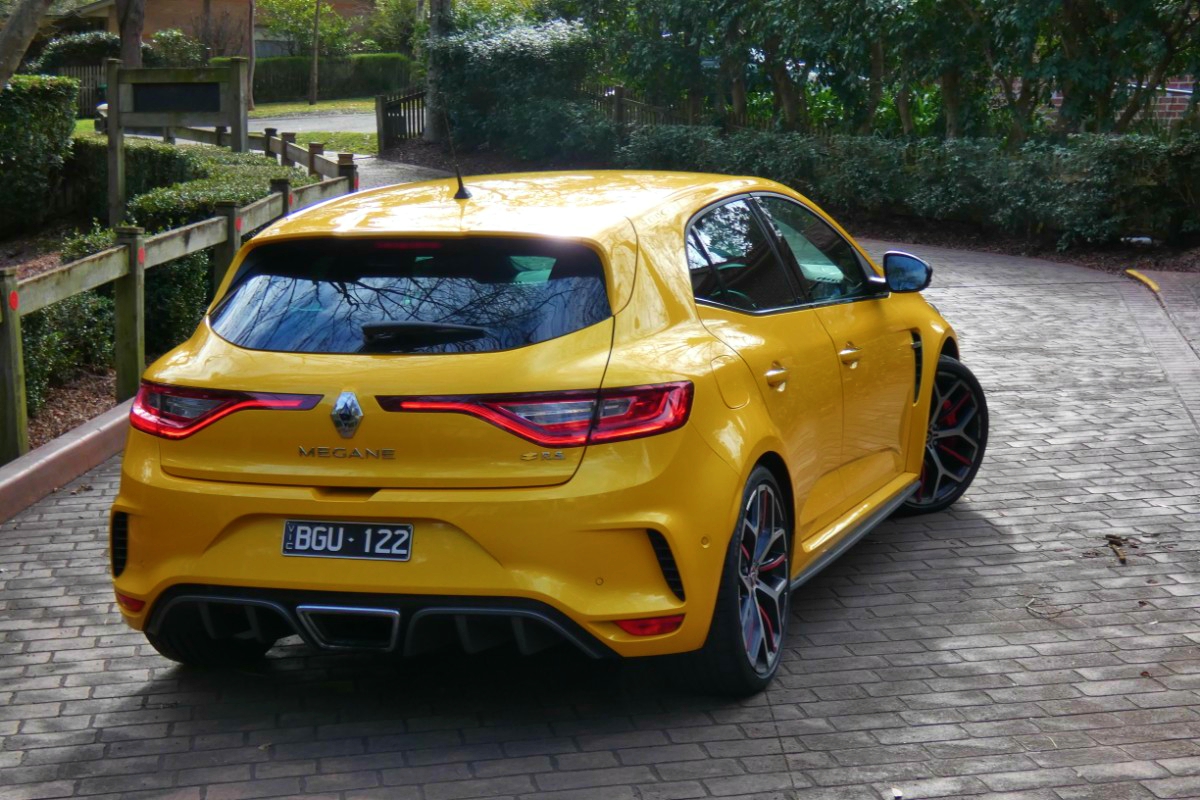 A 6-speed twin clutch auto with auto engine stop-start and large column-mounted gear shift paddles is optional, with prices for the auto varying from grade to grade.

Metallic paint adds $800, signature metallic paint $1000 which encompasses Liquid Yellow or Tonic Orange, and the last option is a panoramic power operated sunroof is another $1990.

It also gets an active exhaust system that amps up the sound.

Audio is from Bose with 9 speakers, a subwoofer and digital amplifier. 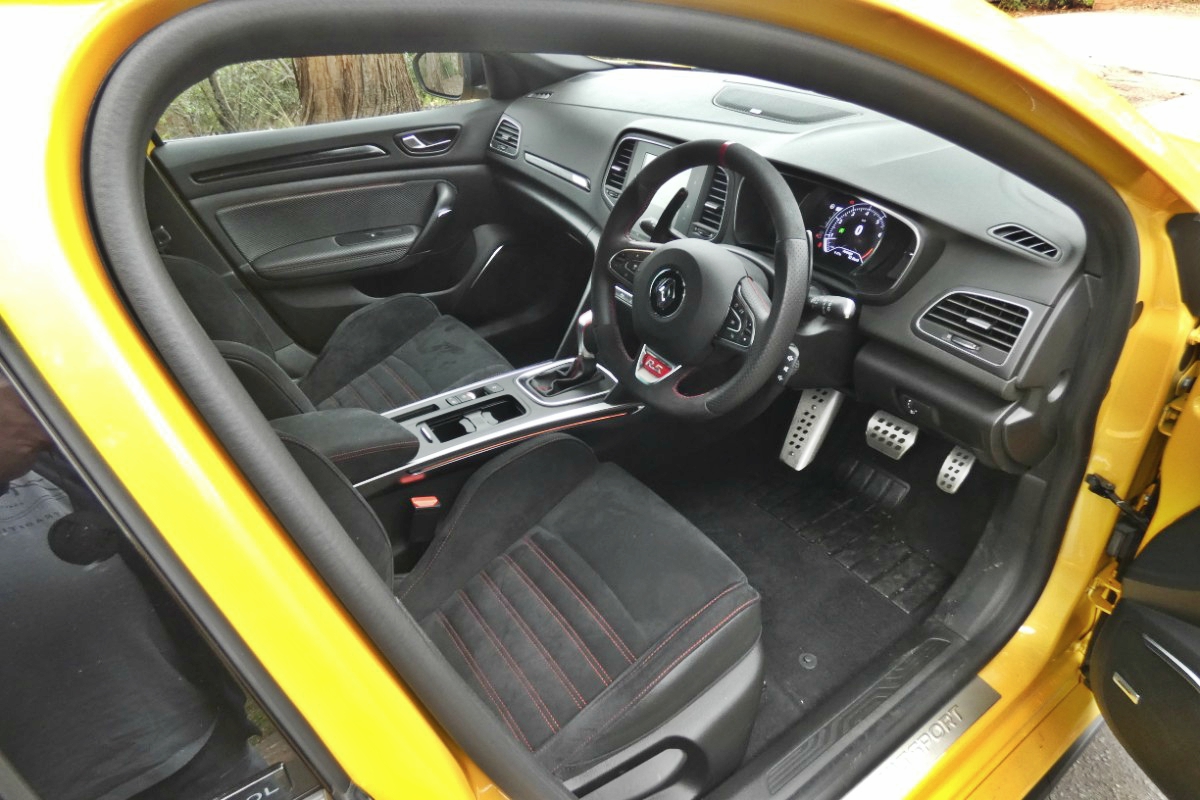 Weight is down and power is up with the Trophy.

The 1.8-litre turbocharged petrol engine produces 221kW of power and 420Nm of torque, the latter from 3200 revs.

This is 16kW and 10Nm more than the Sport or Cup, with maximum torque delivered 800 revs higher in the range.

It’s enough to propel the car from 0-100km/h in a rapid 5,7 seconds, a tenth of a second quicker than the Soprt and Cup.

The EDC transmission incorporates Multi-Change Down and Launch Control, enabling the driver to change down by more than a single gear under brakes — by pressing and holding the left paddle.

The transmission then selects the best gear to exit the corner as efficiently as possible.

Launch Control is available in Sport and Race modes when the clutch and turbo are pre-loaded, enabling an optimum standing start.

The sports seats are heated but need to be adjusted manually and are actually quite comfortable, cupping your backside snugly.

There’s push-button start and an electric handbrake, with a large overly chunky keycard that your supposed to keep in your top pocket — at least that seems to be the idea.

In reality, it’s rather heavy, much heavier than the original Renault cards — and a pain in the butt to carry around.

The Megane is a treat to drive and the first thing we recommend you do is locate the RS button and engage Sport mode.

It makes gear changes snappier and the car feels generally more responsive, as well as changing the look of the instrument panel and generating an enhanced exhaust note.

In fact, there’s four different instrument panel themes depending on whether you’re in Comfort, Normal, Sport or Race mode.

You’ll be tempted to try Race mode, but unless you know what you’re doing, it’s advisable to stick with Sport because the stability system is disengaged in race mode.

And that means things could get nasty before you know it.

There’s lots of snap, crackle and pop from the exhaust and the transmission blips the throttle automatically on down changes.

The changes are smoother than VW’s box and it doesn’t seemed to get confused the way Golf’s DSG does, particularly in stop-start traffic — but that’s not difficult.

The ride isn’t as hard as I remember, at least on the roads we tested.

Cornering and braking are of the highest order.

The thing turns with an incredible sharpness and goes round corners like it’s attached to a giant rubber band — the way it snaps back in.

There’s a limited slip diff and the four wheel steering turns the wheels one way at one speed and the other way at higher speeds to compensate.

Hydraulic bump stops cushion the blow when you run out of suspension.

Once upon a time I remember sharing a car with Holden’s chief engineer responsible for ride and handling (nice bloke but can’t remember his name).

He’d driven the RS and reckoned they could still get some more out of the chassis.

Although the Trophy is a tenth of a second quicker than its siblings, this is not reason alone to fork out for the more expensive model.

Once you’ve heard the Trophy’s active exhaust system however there’s no going back!

I should at this point mention the lane departure system which makes hilarious ‘fart’ noises when you stray from the straight and norrow.

I’d forgotten about them.

Fuel consumption by the way is a claimed 8.3L/100km, significantly more than the Sport and Cup at 7.5.

And it takes the good stuff, premium 98 RON unleaded. This could well be a factor in the decision making process.

We clocked up more than 420km at the rate of 8.8L/100km which included a rapid spin through the hills.

Some silly galoot in a V8 Monaro wanted to race me. It was all he could just to keep his car on the road and after that I kept well clear of him.

I was unable however to avoid a slow moving galah that slammed into the windscreen — didn’t see him coming. 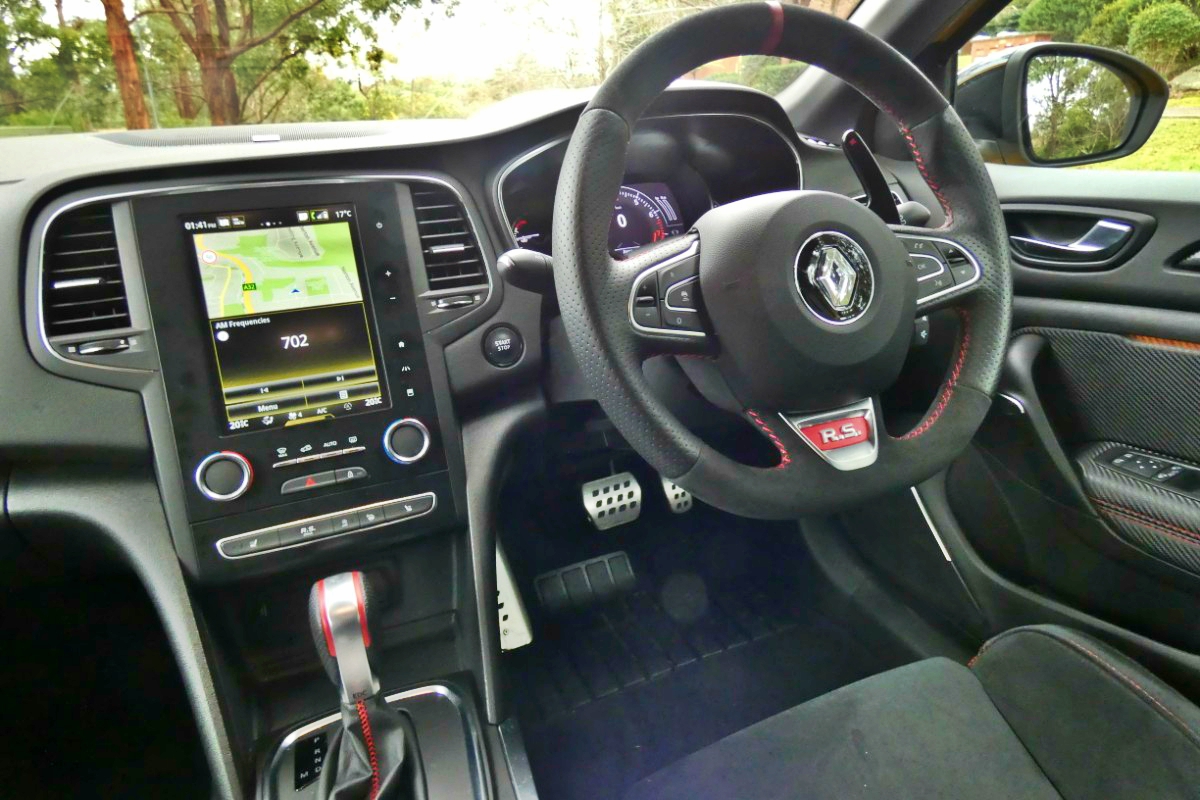 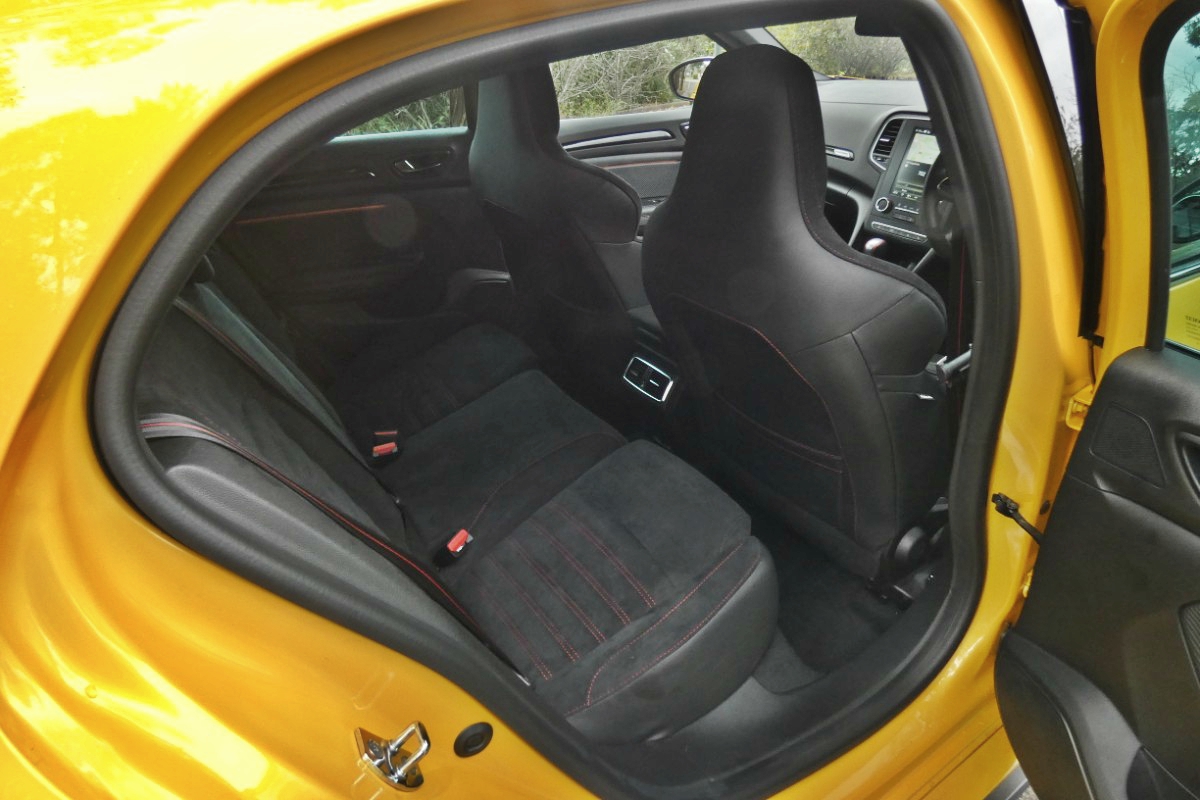 They are all excellent vehicles, that deliver high levels of performance.

None however quite have the flair of the Megane.

You can argue the toss about auto versus manual, but most of the Golfs they sell these days are autos and I’m tipping the Megane will follow suit. 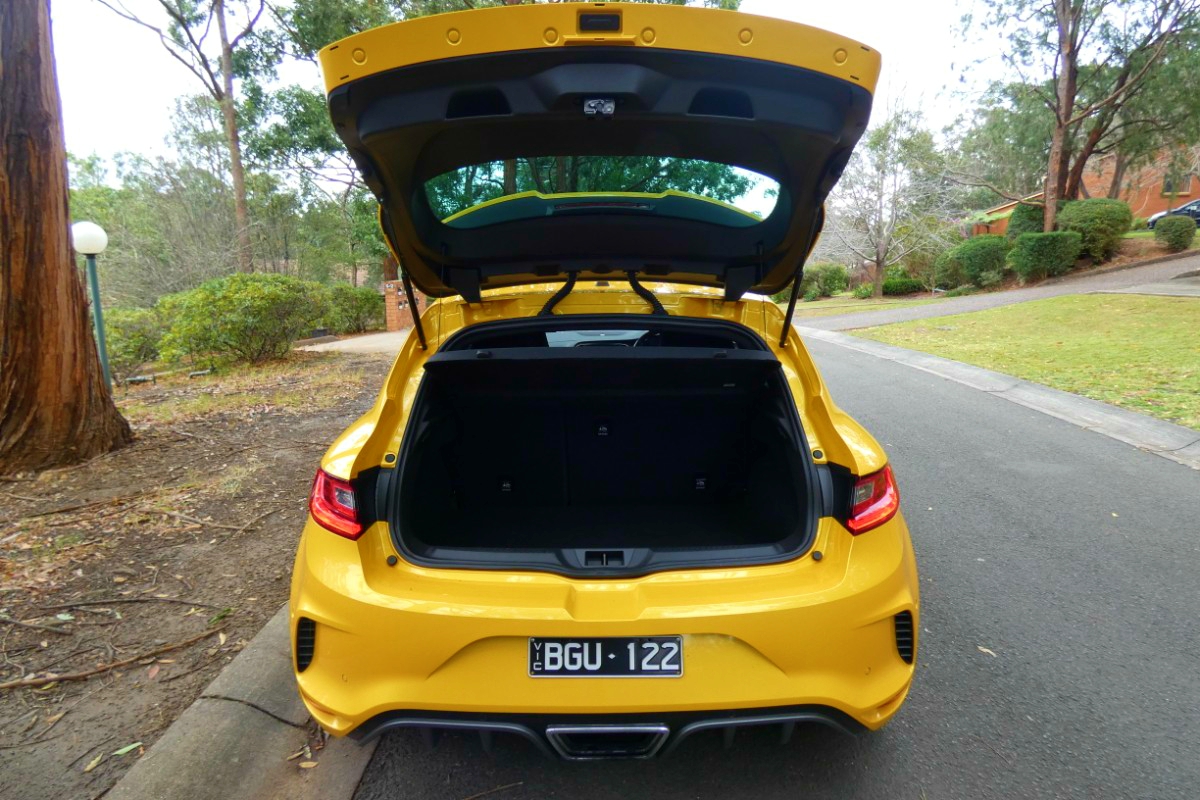