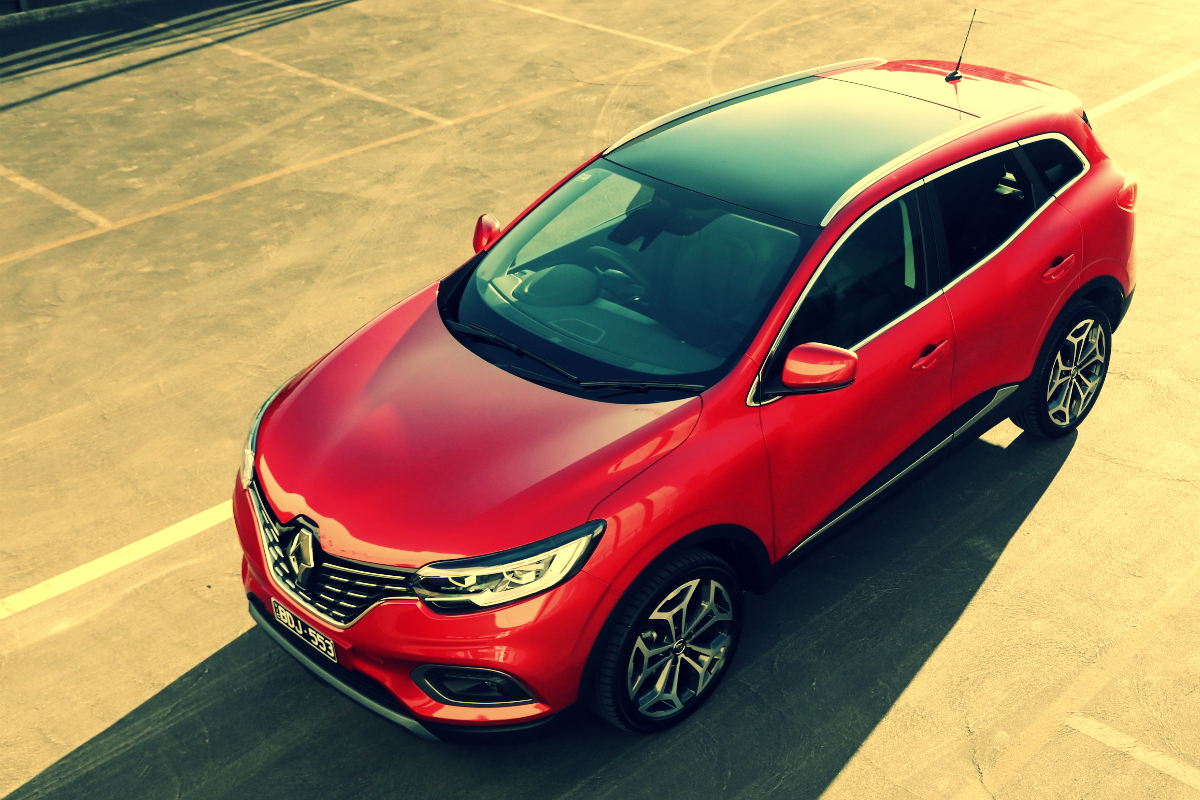 It steers delicately in that vive la difference French way between the brand’s small segment Captur and medium segment Koleos.

It’s a bet each way bridging our two most popular SUV size categories.

The smartly styled Kadjar (based on the underpinnings of the warmly selling Nissan Qashqai) is offered in three guises – Life, Zen and Intens.

They all come with 1.3-litre turbo engines connected to dual-clutch auto transmissions that exclusively drive the front wheels.

If you really need an all-wheel-drive crossover, you’ll have to grab a Koleos, or one of the worthy rival AWD offerings in the compact segment — Kia Seltos, Hyundai Kona, Mazda CX-3, Subaru XV, Suzuki Vitara.

Recommended retail pricing starts with the Life entry model at $29,990, plus on roads.

The Zen is a further $3000 while topping the range is the variant we’re testing, the Intens, which costs $37,990 before on-road slugs.

Comparisons with the Qashqai are inevitable, though it is slightly bigger inside and out.

It is certainly priced and equipped to grab the attention of value shoppers and is exactly the same price as the range-topping Qashqai Ti.

Consumers not unsettled by Regie’s peculiarly named badges will be wooed by the Kadjar’s nicely proportioned modern styling, a cut above the Qashqai in looks at least.

Inside, there’s nothing obvious to dislike either. Not initially.

You acknowledge the easy simplicity of the dash, with logical layout and big, readable gauges.

The 7.0-inch touch screen is large enough for the usual infotainment swiping activities.

But after my recent spell with the wonderfully intuitive Seltos infotainment system, the Renault’s navi, audio and Bluetooth phone connectivity didn’t quite measure up.

I still prefer a couple of sound-system knobs to touch operation, particularly when the vehicle tends to jump around over bumps (more on this later).

Apple CarPlay and Android Auto are standard, and the former gave no dramas during our time with the Kadjar.

The  fancier Intens version, which can be identified by a flattened version of the French tricolour on the B pillars,  gets LED headlights, heated leather seats, Bose sound system, 19-inch alloy wheels, automatic parking assist and the one feature I dismiss as truly unnecessary — a fixed panoramic glass roof.

There are bottle holders in the doors and cupholders in the centre console and rear armrest. And two USB ports up front and two more in the rear.

But no modern adaptive cruise control or lane-keeping assist.

The black leather seats of the Kadjar Intens look smart and comfortable . . . until you sense how damned hot your back feels and how much radiated heat you’re getting from the windscreen and facia.

Does the fascia’s mysterious innards attract and relay the sun’s rays?

Where’s Professor Julius Sumner Miller when you need him?

Stepping into the rear seat compartment is like entering a darkened room because of the high glass line of the rear doors and hatch.

But taller people will appreciate the reasonably generous room, especially if they’ve tried a Qashqai, Kona and CX-3.

Occupants will be thankful for a couple of pleasant mod cons including the air vents and USB.

Flip forward the centre armrest and you’ll find the cupholders.

Further back is a fair-enough cargo space of 408 litres which can grow (by simply tugging once on levers in the rear) to 1478 litres when the rear seats are flattened.

In the hatch there is a smartly finished split-level boot floor with a space saver spare beneath.

With its 1.3-litre turbocharged four-cylinder petrol engine and seven-speed dual-clutch transmission, it’s one of the more spritely performers in the compact/medium crossover SUV zone.

Developed with Mercedes-Benz, the engine develops a responsive enough 117kW and 260Nm – not bad for an SUV of this size and stumping up more muscle than the related Qashqai which has a non-turbo 2.0-litre four.

The force-fed Renault reacts quickly when you push on the pedal, and revs cheerfully to the lowish 6000rpm redline.

With generous low-down torque peaking at just 1750rpm, it actually feels a bit livelier than the modest, claimed zero-100km/h time of 9.6 seconds.

The dual-clutch gearbox reveals no specific vices other than the usual DCT habit of rolling backwards on an incline.

Other than that, it’s a smooth enough unit without the jerkiness characteristic of some of this type.

Engine and gearbox make a good team, ultimately serving up the level of accelerator response you enjoy in the thrust and parry of city traffic.

Unfortunately, even the range topping Intens doesn’t get paddles for any down shifting at your fingertips.

The steering is quite typical of many of today’s SUVs, meaning no effort and no feel at trundling speeds — but a smidge less vague on the highway.

I’d like to sample the ride comfort on the lower-spec Kadjars riding on 60-series rubber fitted to 17s because I am no lover of the Intens’ trendy 19-inch alloys dressed with 45-series rubber.

The tyres themselves are excellent Michelins Pilot Sports but their shallow sidewalls are not always a great fit for our patchy roads.

Sharp edges and depressions can send a savage message through to the occupants via the crashy suspension.

Finally, a Sport worth talking about

The questionable ride is the trade-off for an otherwise competent handling SUV.

But when cruising on a smooth road surface, the cabin environment is pleasantly quiet.

Visibility at crosswalks and when parking is compromised by chunky A pillars and external mirrors plus a bonnet design that kicks upwards at the sides.

At least the limited vision through the rear glass can be overcome via the rear-view camera with front, rear and side parking sensors.

Sipping 95RON petrol, claimed fuel use is 6.3L/100km on the combined cycle.

The Kadjar info gauge consistently told us it was operating at 6.9L/100km in the ‘burbs.

Then again, I possess a gentle right hoof.

Renault includes an auto stop/start feature in order to save a thimble full of fuel a week.

I’m never a fan of these things and found the Kadjar’s particularly aggravating.

Thank heavens for the off switch.

The Kadjar buyer also benefits from five capped-price services with excellent 12-month/30,000km intervals, costing $2385 all up.

And these include filters, spark plugs, coolant and the like.

It’s getting easier to own a French car, or at least one with Japanese genes and an engine designed in partnership with Germans. With the whole package bolted together in Spain.

Strong effort by the Renault to show the world it can be a contender in a popular SUV segment.