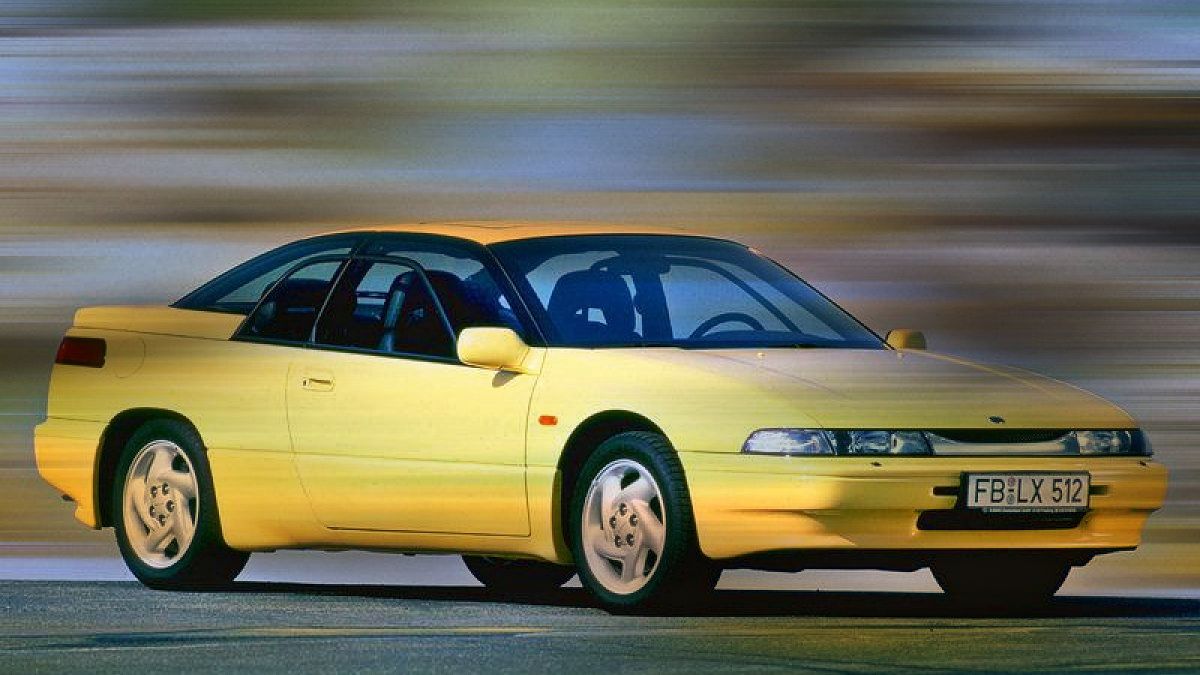 Around the same time that Subaru was developing the WRX, it came up with a larger, luxury GT-style model called the SVX.

Launched in 1991, SVX hung around for just one generation and very few of the cars were sold in Australia — just 249 to be exact.

So you can imagine what a rare treat it is for one of them, a real peach in fact — to come up for auction next month by Shannons.

The Subaru Alcyone SVX debuted as a concept at the 1989 Tokyo Auto Show with styling by noted Italian designer Giorgetto Giugiaro of ItalDesign.

The SVX entered production, retaining its window-within-a-window configuration, adapted from the previous generation Subaru Alcyone with an additional extension of glass covering the A-pillar — which Subaru described as an “aircraft-inspired glass-to-glass canopy.”

In contrast to its angular predecessor the XT, the SVX featured softer lines with its two-piece power side windows.

The windows are split about two-thirds of the way from the bottom, with the division being parallel to the upper curve of the door frame similar to the half-windows of the Lamborghini Countach, DMC DeLorean (another Giugiaro design), and the McLaren F1.

The SVX featured a drag coefficient of Cd=0.29, identical to that of the XT coupe it replaced. European market cars had a slightly lower wind resistance of Cd=0.285, thanks to a larger undertray.

From 1991 to 1992, Subaru displayed the Amadeus, a prototype shooting brake variation on the SVX, in both two- and four-door versions, which was considered for production.

Ultimately, however, the Amadeus was not produced.

This rare two-door, 1993 Subaru SVX, all-wheel drive model up for grabs is described as in pristine condition.

One of just of 249 examples sold new in Australia and increasingly collectible today, the Shadowtone Black with Metallic Grey coupe with its 169kW 3.3-litre boxer horizontally opposed flat-six engine is today showing around 70,000km on its odometer.

It was owned for most of its life by a Subaru Dealer Principal and was purchased from him approximately 4-5 years ago.

The SVX, with its distinctive Italian styling by Giorgetto Giugiaro of ItalDesign, featured aircraft-inspired ‘window-within-a-window’ side-glass and cost significantly more than a new WRX of its era, retailing for between $70,000-$80,000 in Australia when launched.

The car being auctioned presents like new on its aftermarket wheels (although its factory rims are included in the sale) and comes with all its original books and documentation, plus a plaque for winning ‘Best Japanese Car’ at the Macleans Bridge classic car festival in 2019.