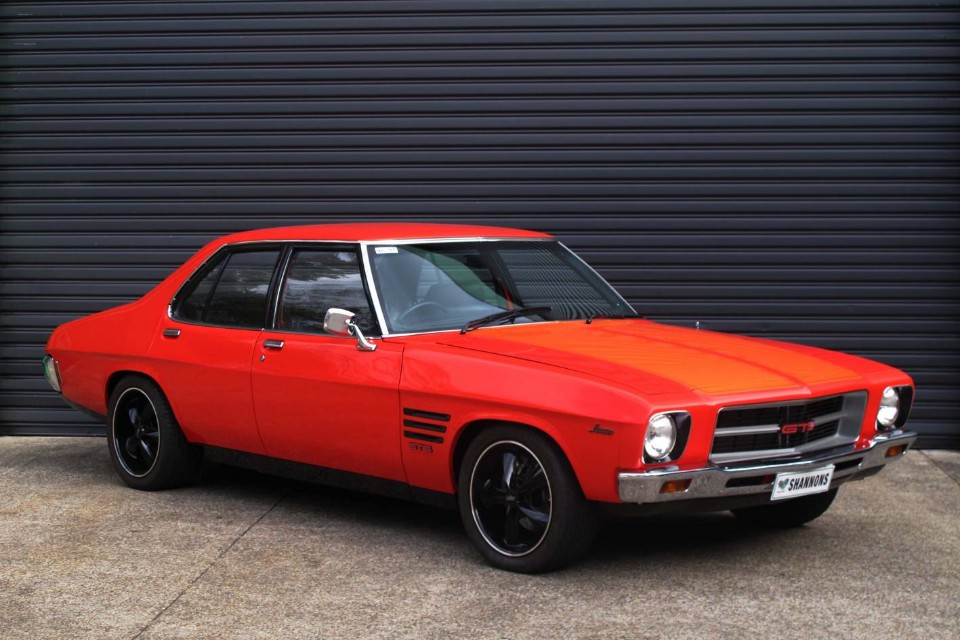 One of the last Melbourne-built examples, the Monaro is optioned with a four-speed Muncie manual gearbox.

It has been freshly restored inside and out in its original factory colours of Tangerine/Black and is now fitted with a replacement ‘crate’ 350 V8 engine.

Offered with a with a GM-H Letter of Authenticity, it is slated to bring $42,000-$50,000, but given its rarity, Shannons believe it could easily sell for more.

Equally-desirable for GM collectors is a fabulous first-generation, two-owner 1969 Holden HK Monaro Coupe that has survived largely as it left the factory.

Delivered with a 186-cid six-cylinder and Powerglide transmission, the Monaro was purchased by its current long-term female owner when it was just two years old and has been her cherished, garaged and very well-maintained since.

Presented in lovely condition following a respray in its original Ermine White approximately 25 years ago, it is expected to have special appeal to collectors and sell in the $35,000-$45,000 range.

A 1962 Holden EJ Premier Sedan that has benefitted from a lot of mechanical work, but still retains its original Hydramatic transmission, is expected to sell in the $24,000-$28,000 range.

A now rare and collectible 1964 Holden EH Premier Sedan that has been in one family from new, but needs some body refurbishment, is expected to bring $14,000-$18,000.

Ford enthusiasts will be attracted to a standout black, 1962 Ford Falcon XL Utility that is believed to have been first owned by a funeral home in Caboolture, Queensland.

Mopar enthusiasts will have three classic Valiants to choose from – two offered with ‘no reserve’ – and all expected to sell in the $24,000-$36,000 range.

Perhaps the most desirable of the three is an extensively-restored 1969 Chrysler Valiant VF Pacer Sedan.

This very clean Pacer was comprehensively restored back in 2009 that included a repaint in its original ‘Wild Red’, while its 225-cid six-cylinder engine was bored out, fitted with triple Weber carburettors and its three-speed gearbox was replaced by a later four-speed transmission.

Equally desirable for Charger lovers is a bodily-unrestored 1972 Chrysler Valiant XL Charger 265 that left Chrysler’s Tonsley Park factory as a 245 model with a column-shift automatic.

Now mechanically-updated with a larger 265-cid six-cylinder engine and converted to three-speed manual transmission, it is being offered with ‘no reserve’ and is expected to bring $28,000-$32,000.

Also offered with ‘no reserve’ on Monday evening is a 1967 Chrysler Valiant VC factory-fitted with the desirable 273-cid V8 engine option.

Finally, in a treat for Mini enthusiasts there is a very desirable, Australian-built 997cc Mini-Cooper.

Cherished by its current ex-BMC mechanic owner of more than 30 years, who embarked on a no-expense-spared ground-up restoration in 1989, this very collectible Mini is expected to sell in the $32,000-$40,000 range.

Check out these other stories . . .

When Japan made European cars