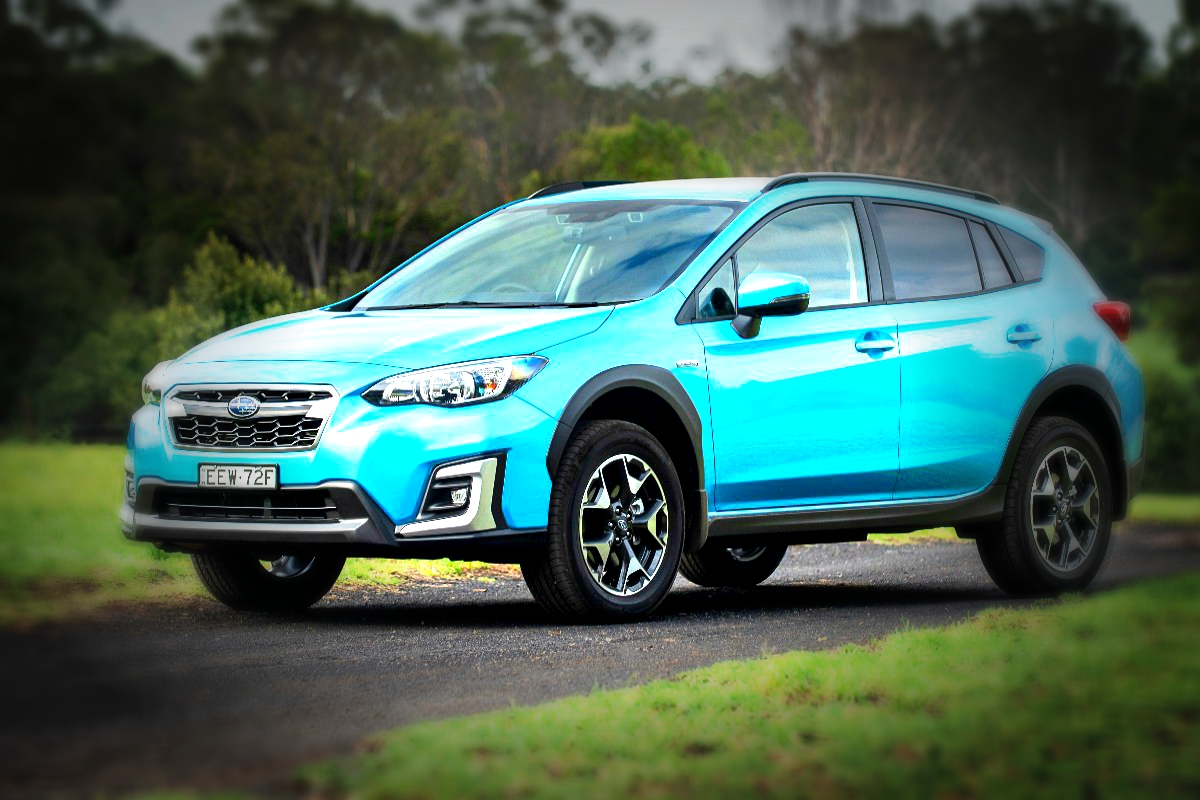 Subaru’s toe in the water attempt at cracking the hybrid market.

The Forester has two hybrid options based on trim levels, the XV hybrid is offered in only one trim.

They offer little to differentiate them externally, with smaller petrol engines, and carry more weight than their non-hybrid siblings — including the Impreza sedan.

Forester comes in Hybrid-L and Hybrid-S form. We drove the S with all of the fruit first, followed by the non-hybrid 2020 spec Impreza sedan, and finally the Hybrid XV.

Both test hybrids came in shades of blue, the XV in an aquamarine not unlike the Atlantis Blue once available from Holden.

Wheels and rubber are 225/60/17s for the XV and 225/55/18s for the Forester, supplied by Yokohama and Bridgestone respectively.

Labelling the cars as hybrids is a small badge saying “E-Boxer” powered.

Styling, freshened up just over two years ago, remains unchanged.

Forester and the bigger Outback look like station wagons, but SUV-sized.

The XV is a jacked up Impreza hatch, with a slightly awkward stance as a result.

XV shares more with the Impreza looks-wise than Forester outside and, as a result, includes the should-be but aren’t integrated reverse light design.

Forester has plenty of head room thanks to a high roof line, standing 1730mm tall, but could easily lose some to make it look less boxy.

Ground clearance for both is 220mm and wheelbase is virtually the same — at 2670mm and 2665mm for XV and Forester.

Interior layouts are virtually identical. They share the same dash shape and have the same proscenium arch sweeping from door to door.

XV has a smaller 6.5 inch touchscreen, the Forester’s is 8.0 inches.

Both have a CD slot and share the same, awkwardly tucked away pair of USB ports up front.

Sound for both is DAB, but the touchscreens show no information about content even with all tabs ticked.

Ancillary controls for the driver are smartly laid out and visible above the driver’s right knee.

There are a couple of acronyms in the pair; SRH is Steering Responsive Headlights and AVH is Auto Vehicle Hold, the braking mechanism on slopes.

There’s no shortage of safety including Subaru’s brilliant Eyesight system.

There is a Front view Monitor, a warning for the driver that the car ahead has moved on, as well as the usual packages such as Rear Cross Traffic Alert, Blind Spot Alert and the seven airbags are standard.

Both have the same 2.0-litre petrol engine and battery pack under the cargo floor at the rear.

An graphic available from the centre top dash screen displays energy distribution, plus it shows the electric motor at the rear of the petrol engine.

Economy averaged 7.7L/100km for both. Considering their weight, at 1536kg for the XV and 1642kg for Forester — the figure is decent if not spectacular.

In comparison, the non-hybrid Impreza sedan tested between hybrids, which weighs less at 1373kg but packs the same 2.0-litre engine — averaged 7.1L/100km.

Presumably, the extra weight of the hybrid powertrain negates any fuel savings.

The transmissions are also the same.

Both have a CVT with seven, pre-programed steps, and the same sense that it saps energy from the engine in some driving situations.

This also applies when underway, otherwise there’s plenty of fire and brimstone . . . but not a lot of eruption.

Go harder and there’s a turbo-lag like pause at times, but a better sense of “cog swapping” with a more defined change between ratios.

Some slow and low throttle applications produced jerkiness and a slide between the ratios, with a more traditional CVT sensation.

However, it’s the hybrid integration that needs work.

The cars will move away silently under electric power until the speedo reaches 20km/h.

Forester and XV have instant engagement of the petrol engine from a standing start and very rarely does the electric EV mode icon on the driver’s display light up.

It’s there on downhill runs and sometimes on the freeway, but not that often — to be honest.

For us, the integration of the battery and electric motor needs some fine tuning as it’s not as on song as the competition.

Toyota continues to lead the hybrid push and it’s clear they’re better at it.

Weight counts against them and given the lighter XV averaged the same as the Forester, it begs the question: what needs to be done to make them a viable alternative?

Either they need to lose some weight or an improvement is required in the electric setup. 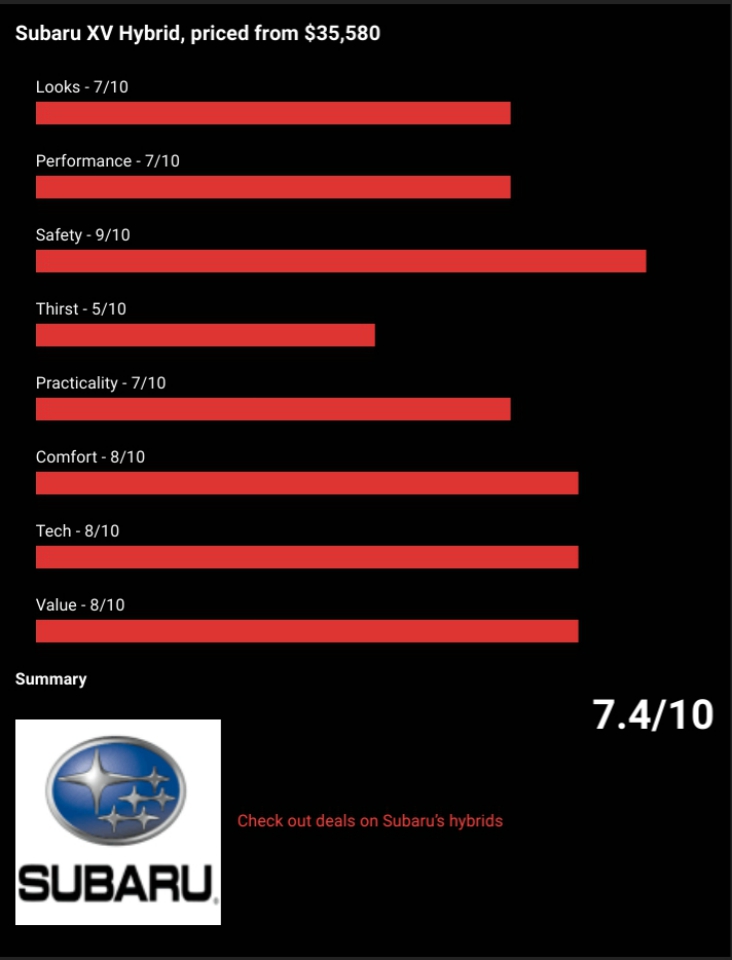 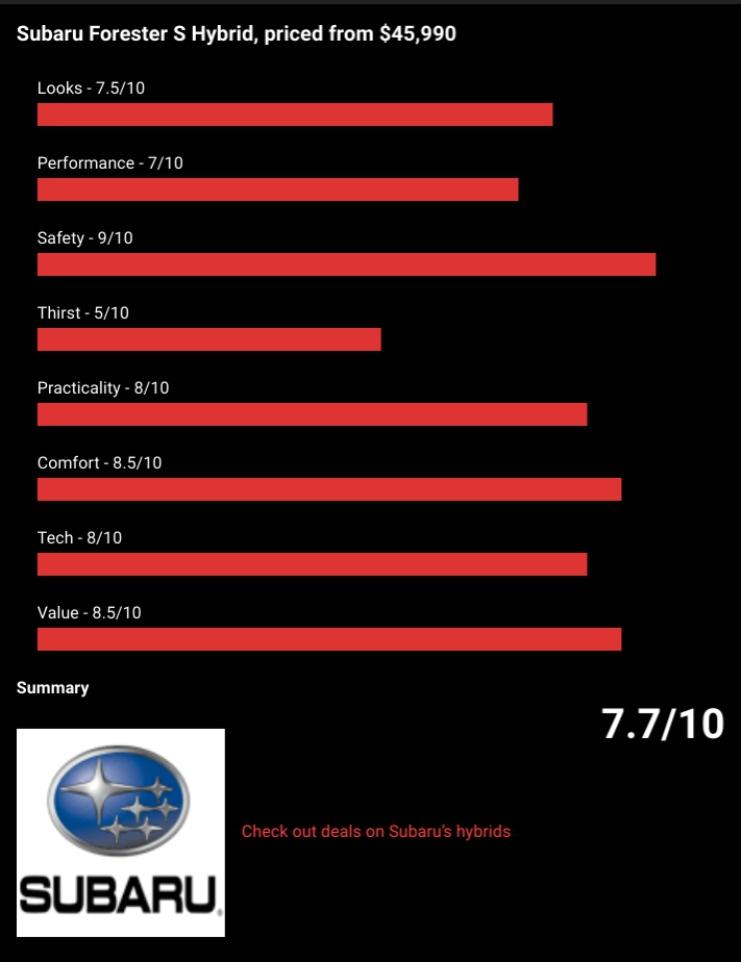