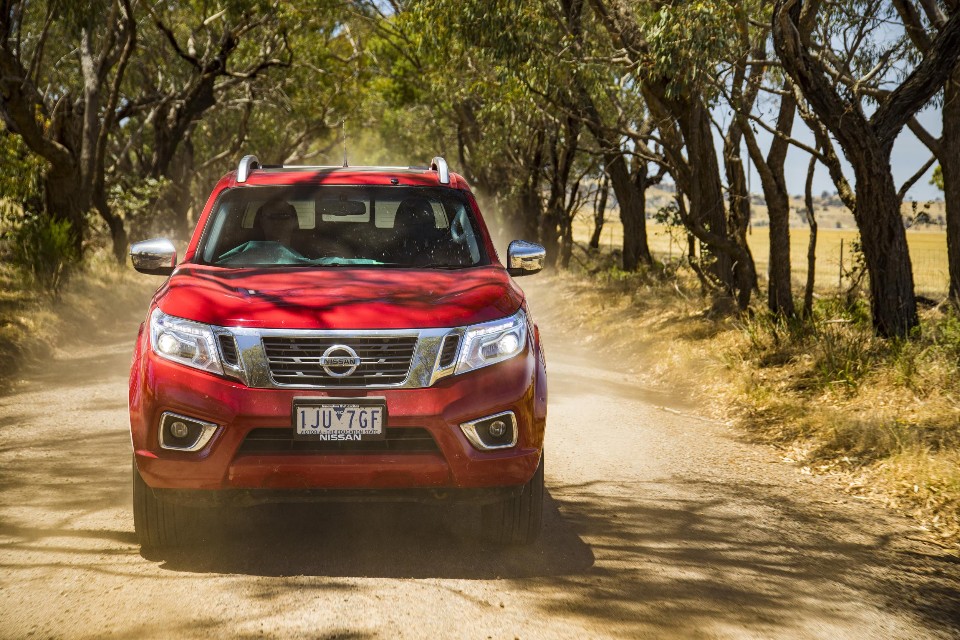 Nissan has another crack at ‘fixing’ Navara

Home
Launch mode
Nissan has another crack at ‘fixing’ Navara

Customers have a smorgasbord of variants to choose from with the updated Nissan Navara Series III ute.

When Nissan released the Series II Navara back in 2015, customers and industry watchers were taken aback, some even hostile about the coil spring rear setup in the dual-cab.

The company said it was all about improving ride comfort, but tradies who wanted to lug big loads or tow heavy trailers, pined for the stiffness offered by a traditional leaf-spring setup — all available with Navara’s dual-cab rivals.

Stung by mounting criticism, in March last year the company made some running changes to the suspension, but the modifications did little to fix these shortcomings.

Now, with the release of the Series III range, Nissan is hoping the engineers have finally got it right?

Navara kicks off at $25,990 for the six-speed manual 4×2 RX cab/chassis and tops out at $54,490 for the ST-X dual-cab pick-up with a seven-speed automatic transmission.

If you want one with everything, add $1500 for leather-accented door trim and seats, an eight-way power driver’s seat with lumbar support and heated front seats.

A tilt-and-slide sunroof adds another $1000 and if you’d like premium paint, you’ll have to cough up another $550.

Depending on variant and transmission, Nissan claims fuel consumption for this engine of between 6.4L and 7.1L/100km. 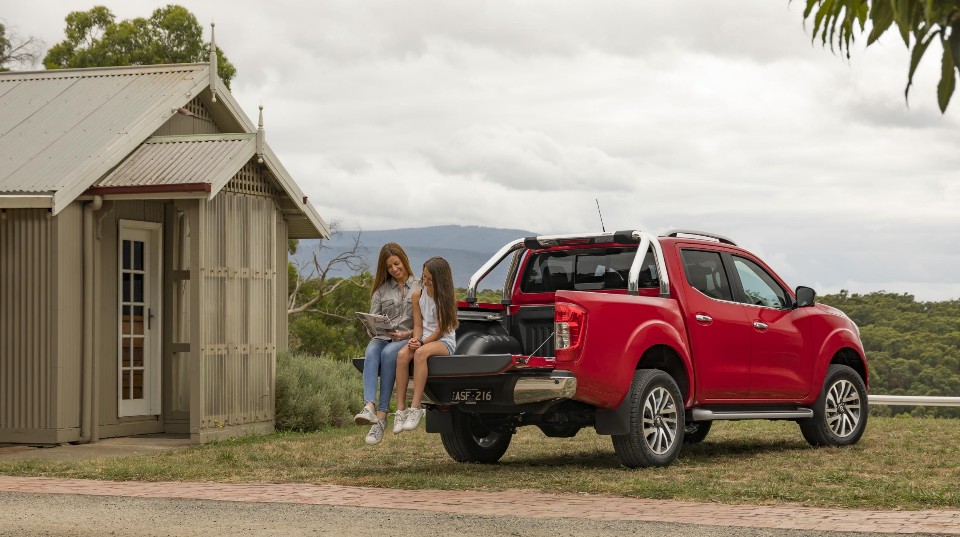 Not surprisingly, the twin-turbo is the pick, with 140kW and 450Nm across the same rev range.

The higher-performing engine delivers between 6.3 and 7.0L/100km.

Although only 2.3 litres in capacity, the engine is willing and surprisingly refined in terms of noise intrusion and combines beautifully with the excellent seven-speed sports shift auto.

During a somewhat enthusiastic twisty gravel-road section on the national media launch, my co-driver and I recorded 10.6L/100km with a 650kg load on the back,

While lower-spec models ride on 16-inch wheels, the ST-X  — the one we’ll focus on here — rides on purposeful-looking 18-inch alloys shod with 255/60 rubber.

At the front, there’s independent, double-wishbone suspension with a stabiliser bar.

The rear features a newly developed, five-link, dual-rate coil-spring arrangement and it comes with a full-size alloy spare.

Although the rear brakes are drums not discs, stopping power is impressive even with a load on board or a loaded trailer.

Speaking of trailers, the dual-cab Navara has a braked towing capacity of 3500kg.

For its part, Nissan has been a strong and consistent player in the ute market for a long time.

In fact – not that we saw the early ones here – the company in Datsun and Nissan guises has been in the ute business since 1935.

The first Datsun ute arrived in our country in 1972, 13 years before the name change.

The first-generation Navara was launched here in 1986 and was followed from 1997 to 2015 by its second-generation successor.

The updated and just-superseded range was launched in 2015 and since then, more than 43,000 units have been sold.

Navara customers and the motoring media — especially those in Australia — didn’t warm to the underpinnings of the first-generation Navara and a big helping of criticism prodded Nissan engineers into action.

They totally rejigged the Navara’s suspension and steering and, in a move that took everyone by surprise, they dropped the age-old leaf springs at the rear of all but cab/chassis variants and replaced them with coils — a segment first.

Trouble is, the criticism continued with the just-superseded dual cabs. While the ride was more comfortable, if you wanted to carry a heavy payload, the softer coils sagged, making the nose rise and the tail droop — along with lots of thumping as the suspension found the bump stops.

So, once again, Nissan engineers set to work to stiffen things up at the rear and to improve the ute’s steering by speeding up the ratio for better handling.

Before the the latest Navara’s arrival on our shores, engineers conducted some 40,000 tests and covered more than 1 million kilometres in all kinds of conditions around the world.

A vast amount of local testing was also undertaken — mostly in central Victoria in and around Bendigo and Kinglake – amounting to thousands of kilometres, including plenty of towing and lugging of heavy loads.

Engineers also benchmarked the new Navara against several of its toughest competitors – the market- and segment-leading Toyota Hilux, Holden’s Colorado and the Ford Ranger.

Although still not a segment-leading set-up, this time around it’s a major improvement — because they listened.

Central to the new underpinnings is a dual-rate rear-spring in which the first stage delivers ride comfort when the Navara is unladen or carrying light cargo.

With the second stage of spring compression, a higher load can be lugged without, as Nissan puts it: “compromise in posture or ride-and-handling quality.”

This also improves steering and handling during towing, as does the quicker steering ratio.

The launch included an excellent two-day drive program that included much of the superb Yarra Valley and some twisting dirt roads.

Unfortunately, there was no rock-hopping, off-road stuff.

Dual-cab variants were the vehicles of choice. As well as an unladen variant, we also had one towing a trailer filled with gravel and a concrete mixer and a top-spec ST-X with weights totalling 650kg on board.

While all dual-cab utes look a bit like peas in a pod, recent Navaras have been among the most handsome — both internally and externally and the latest update continues the trend.

While the ST-X has plenty of hard plastic trim (it is, after all, a working ute), it actually looks quite classy inside, as does the dash treatment.

There are nice big, easy-to-read dials and a 7.0-inch touch screen that includes satellite navigation and 3D mapping.

Driver ergonomics are excellent with all knobs, switches and buttons falling easily to hand and there is a great-to-hold, multi-function, leather wrapped steering wheel.

While the front seats are reasonably comfortable, my co-driver and I both felt they could use more bolstering for the thighs.

Storage-wise, ST-X has a roof-mounted sunglasses holder, a small glove box, four bottle-friendly door pockets, a small open bin beneath the centre stack, another small bin beneath the front centre armrest, a shallow but useful open tray atop the dashboard, four front cup holders (none in the rear) and map pockets behind the front-seat backs.

One handy feature – and it’s a segment exclusive – is the small, sliding rear window. It’s great for added ventilation or if you’ve got an after-market canopy fitted.

It also helps facilitate conversation between you and your dog if he’s in the back. 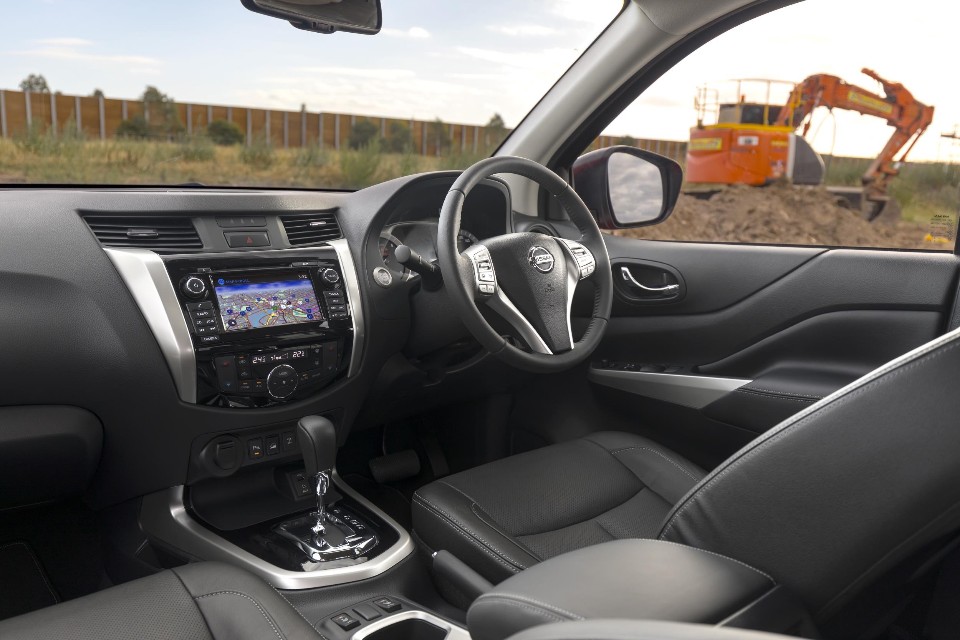 The Australian market has undergone some dramatic changes in recent years, not the least of which is the rise and rise in popularity of dual-cab utes.

Originally the exclusive playground of the Japanese brands, they have now been joined by the Chinese, Germans and Indians.

And, speaking of the Germans, even Mercedes-Benz has decided it wants a slice of the action, with its Navara-based offering only a few weeks away.

Most noticeable by their absence are the Koreans, who have really dragged their feet in this segment, but that too is sure to change in the not-to-distant future.

It might have taken Nissan a few years and a couple of attempts to sort Navara’s suspension, but this time they have really made a significant improvement.

The ride, handling and steering are noticeably better and the ute’s ability to haul a load or tow one is greatly improved.