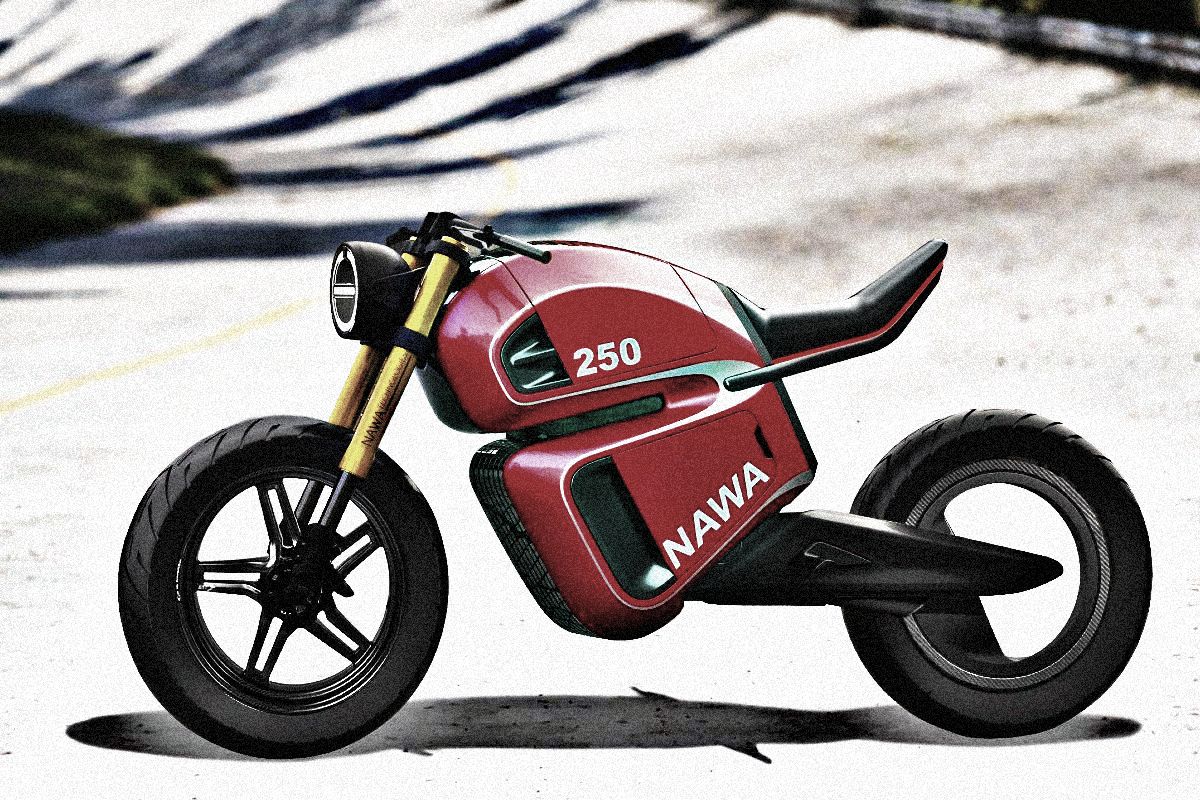 But months down the track the company is still looking for a financial backet to put the bike into production.

The zero-emission motorbike illustrates how Nawa’s nano-based ultra-capacitors, called NawaCap, can be applied to a real-world electric vehicle (EV), combining them with conventional lithium-ion cells to create a ‘hybrid’ battery system.

Entirely modular and scalable, the system is applicable to any electric vehicle and can reduce the size of the lithium-ion battery by up to half, or extend the range by up to double – or a combination in between.

“The Nawa Racer is our vision for the electric motorbike of tomorrow – a retro café racer-inspired machine, but one that is thoroughly modern,” Nawa founder Pascal Boulanger said.

“It is lightweight, fast and fun, perfect for an emission-free city commute that will put a smile on your face.

“But it also lays down a blueprint for the future.”

Thanks to its lithium-ion battery, Nawa Racer can cover 150km on a mixed cycle.

But by capturing so much energy from stop-start riding, releasing it again as acceleration, it can double its urban range to 300km.

The NawaCap pack recharges in just two minutes and the entire battery can be charged to 80 percent in one hour from a home supply.

As standard, the in-wheel motor produces 134kW, rocketing from 0 to 100km/h in less than three seconds and on to a top speed of 150km/h.

And no matter the charge level of the lithium-ion battery, this acceleration will always be available because of the ultra-capacitor’s high power characteristics, which continually maintain response and performance.

With three driving modes (Eco, Urban, Sport) and a fully programmable bespoke driving mode, not to mention the option to easily upgrade the NawaCap batteries, along with an app that connects the rider to the bike 24hrs a day — there are many ways to configure Nawa Racer.

Intended to turn heads as well as offer a ground-breaking electric powertrain, Nawa Racer brings a modern twist to its retro looks with simple, smooth lightweight composite panels and rear arm, painted aluminium, copper and black, based on a strong, stiff but light carbon-fibre frame.

Details such as LED lighting for the headlight and taillight, anodised matte black suspension forks, nubuck leather saddle in vintage complete the striking look. Nawa Racer will also focus on customisation with multiple ways to tailor and futureproof its striking design.

While Nawa has no plans to make or sell a production version of the NawaRacer, it is open to approaches from appropriate partners interested in taking this revolutionary e-motorbike to the streets.

CHECKOUT: AMBY goes where no electric bike has gone before