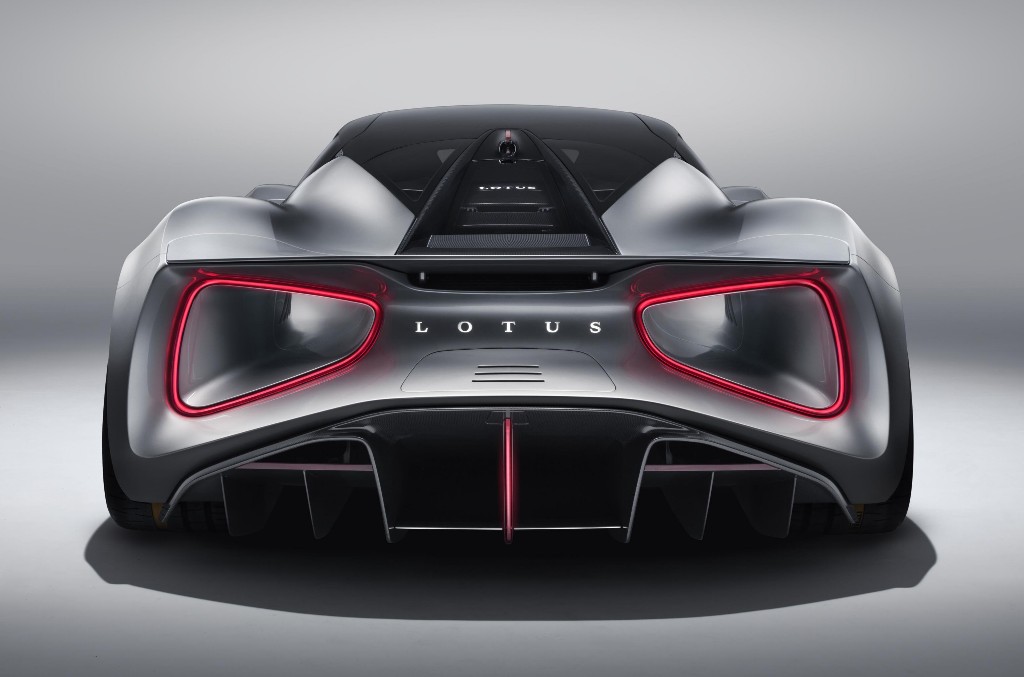 British sports car maker Lotus has lifted the lid on its first, all-electric super- or hypercar.

Called Evija, Lotus says it will be the most powerful series production road car ever built.

And it will have a range of 400km fully charged.

Evija (pronounced ‘E-vi-ya’) means ‘the first in existence’ or ‘the living one’.

As such Evija marks the start of an exciting new chapter in the history of an iconic and much-loved British sports car brand.

It is the first hypercar from Lotus, and the company’s first model with an electrified powertrain.

It’ s also the first completely new car to be launched under the stewardship of Chinese car maker Geely which now owns Lotus.

Production will be limited to just 130 examples, making it among the most exclusive cars ever launched.

The figure is a tribute to the car’s project code, Type 130.

Lotus road and race cars throughout the brand’s seven decades of success have been assigned a Type number, and the Evija is no exception.

The company has confirmed production of the Evija will begin in 2020.

Key to the exceptional power output is the 2000 kW lithium-ion battery, supplied with its management system by Williams Advanced Engineering (WAE) as part of a joint venture with Lotus to collaborate on advanced propulsion technologies.

Torque-vectoring, enabled by the four e-motors, provides exceptional dynamic response and agility on the road.

This fully automatic, self-adjusting system can instantly distribute power to any combination of two, three or four wheels within a fraction of a second.

In Track mode the ability to add more power to individual wheels enables the radius of corners to be tightened, potentially reducing lap times.

Speaking at the launch of the car in London, Lotus Cars CEO Phil Popham said Evija is a car like no other.

“It will re-establish our brand in the hearts and minds of sports car fans and on the global automotive stage. It will also pave the way for further visionary models,” he said.

“This is another amazing moment in the history of our company. The Evija is a true Lotus in every sense – it has been developed with an unwavering passion to push boundaries, to explore new ways of thinking and to apply ground-breaking technologies.”

A hallmark of the design are dramatic Venturi tunnels through each rear quarter, giving it a truly breath-taking presence.

“We studied how Le Mans race cars use air flow creatively to go over, under and around the vehicle, but also through it,” he said,

“This concept of ‘porosity’ is key to the Evija and has enabled us to create a timeless design with exceptional amounts of downforce.”

The Evija signals the start of a contemporary new design language for Lotus, which will evolve and reappear on future high-performance cars.

It is the first Lotus road car to feature a one-piece carbon fibre monocoque chassis.

The cabin, from the fully adjustable race-style seats to the multi-function steering wheel, is the very pinnacle of motorsport-inspired road car design and technology.

At the heart of the Evija is an ultra-advanced all-electric powertrain.

It has been developed with technical partner Williams Advanced Engineering, famed for success in motorsport, from Formula One to electrifying the first four seasons of Formula E.

The battery pack is mid-mounted immediately behind the two seats and supplies energy directly to four powerful e-motors.

This highly efficient system is the lightest, most energy dense, electric power package ever fitted to a road car.

With a target weight of just 1680kg, it will be the lightest pure electric hypercar ever to go into series production.

Not only does the Lotus Evija feature the world’s most powerful automotive drivetrain, it also boasts the world’s fastest charging battery.

Thanks to the partnership with Williams Advanced Engineering, the battery has the ability to accept an 800kW charge.

Although charging units capable of delivering this are not yet commercially available, when they are it will be possible to fully replenish the battery in just nine minutes.

Using existing charging technology – such as a 350kW unit, which is currently the most powerful available – the Evija’s charge time will be 12 mins to 80 per cent and 18 mins to 100 per cent.

Lotus is in discussions with external suppliers on a charging solution for customers.

Evija is priced from £1.7m plus duties and taxes. A £250,000 deposit secures a production slot. Order books are now open through www.lotuscars.com.

CHECKOUT: Electric cars: where to from here?