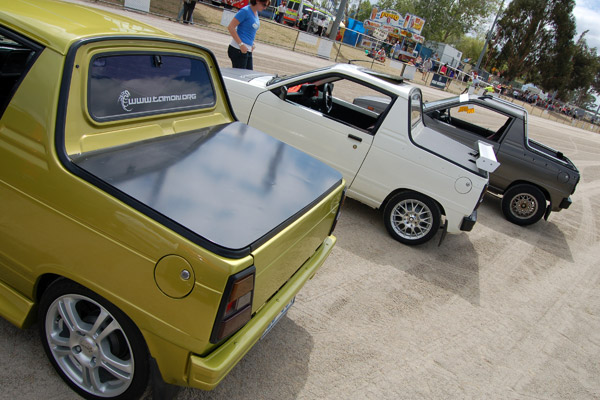 Little ‘Boy’ with a mighty reputation

To some it’s not really a car, not in the strict sense of the term.

Others regard the Suzuki Mighty Boy as an automotive icon, to be treasured and not forgotten.

The Mighty Boy was a tiny ute produced by Japanese car maker Suzuki from 1983 to 1988.

Apart from Australia the only place Mighty Boy was sold outside Japan was Cyprus for some reason.

With drive to the front wheels it was available with a four-speed manual or two-speed automatic transmission.

However, it did not include such items as a tachometer or the five-speed manual gearbox.

While retaining the look of the Cervo with its wide B-pillars, the Mighty Boy had its own rear design.

A small flat bed of no more than 600 mm length was only of limited utility, but the low slung driving position was both more comfortable and completely unlike any of the cab forward pickups in the Japanese micro truck market.

The comparatively spacious cabin also offered sliding and reclining seats, and a reasonably large luggage area behind the seats.

Mighty Boy was classified as a commercial vehicle in Australia and benefited from lower taxes.

The manual version sold for $5795 when introduced to Australia, the cheapest automobile available there at the time.

Fleets of Mighty Boys are reported to have been used as pizza delivery trucks back in the day, with the tray able to accommodate the equivalent of two family size pizzas, with plenty of room behind the seats for a bottle of Coke and a couple of garlic-breads.

About 2800 were imported here but only 300 to 400 are thought to remain, but many of them like the one in our featured photograph have been significantly modified – some have even been fitted with a turbo.