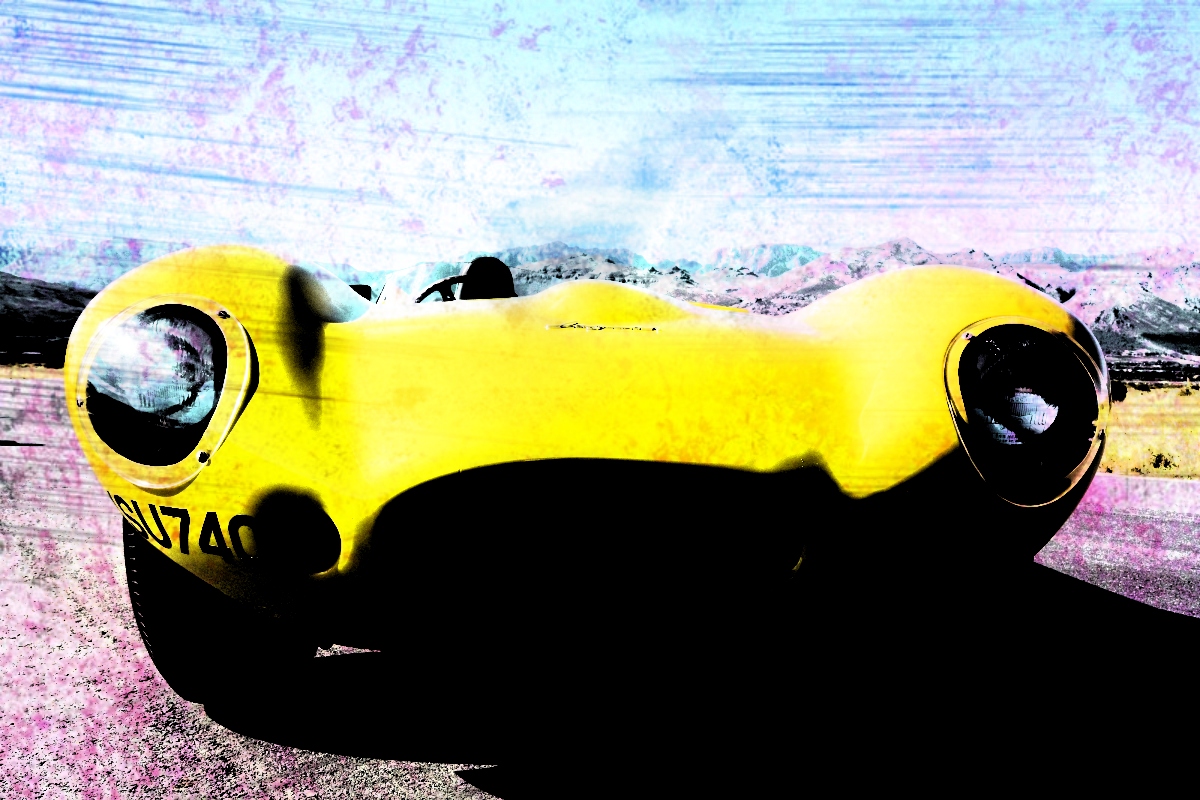 Inheriting my grandfather’s pioneering motorist genes, I grew up as a bit of a car nut and Jaguars have forever held a fascination for me — for a number of reasons.

Not least of these was being born about three kilometres away from the original Browns Lane factory in Coventry, England.

I still vividly remember the big advertising hoardings around the city promoting the brand’s principles of ‘Grace, Space and Pace’ and the giant ‘leaping cat’ statue placed on the corner of a busy road junction near where I lived.

In my childhood, I often spent time wandering around the city’s major Jaguar dealer, gazing at the majestic models on display.

Added to this, an interest in model car building was ignited when my best friend proudly showed me the Airfix British Racing Green D-Type he had just glued together.

At that time, Jaguar was on a hat-trick of D-Type victories at Le Mans, but the possibility of this achievement took a severe blow when a massive fire all but destroyed the factory a few days after my ninth birthday in February, 1957.

We could see and smell the smoke from our house, and reports of the fire and the aftermath in the Coventry Evening Telegraph were illustrated with many dramatic pictures of the devastation.

The loss was valued at an estimated £3.5 million (equivalent to around £85 million today).

Likely as a result of the fire, Jaguar disbanded its works racing team, so the five cars that competed in the 1957 Le Mans were officially privateer entries — two under the banner of the Scottish racing team Ecurie Ecosse and the other three run by the French Equipe Los Amigos, Equipe Nationale Belge and Duncan Hamilton Racing, respectively.

In an outstanding display of speed and reliability, the result was all but a clean sweep, the D-Types finishing first, second, third, fourth and sixth.

For the fourth-placed Equipe Nationale Belge car of Paul Frére and Freddy Rousselle, it was a case of déjà vous as the car had finished fourth the previous year in the hands of Rousselle and team principal Jacques Swaters.

Many years later, evidence came to hand suggesting the car was, in fact, a pukka ‘works’ car, but whether true or not — it does not take anything away from its performance.

Prior to Le Mans, in August, 1956 Rousselle drove the car to 11th place at Oulton Park and in September Belgian Teddy Pilette finished second at the Montlhéry Autumn Cup race in Montlhéry.

In October, Duncan Hamilton was a once-off entrant of the car for Pilette to drive in the Montlhéry Coupes du Salon where he finished fourth, before the car was prepared for the 1957 Le Mans.

In the build-up to the 24-Hour classic, in May, 1957 Rousselle finished second in the Spa GP and later in the month Lucien Bianchi finished fifth at the Forez 2-Hour.

May was also the month the car was used at the opening of the new Brussels showroom of Jaguar’s infamous Belgian importer Madame Joska Bourgeois.

Following Le Mans, in August the car finished fifth at the Swedish GP in the hands of Alain de Changy and Claude Dubois before De Changy drove the car to second place at the Spa GP a couple of weeks later.

In 1958, the car was sold to Baron Janssen de Limpens, who used it to commute between Brussels and his weekend home by the sea.

In 1962, it was sold to Antwerp Jaguar, and the car finished eighth in the hands of Briton Francis Francis in Race 2 of the inaugural (non-championship) Japanese GP at Suzuka on May 4, 1963 — to complete a 100 per cent finishing record in its competition history.

It appears as though the car then resided in Paris for a while before being sold to wealthy British racing driver and team owner John Coombs, who placed the car on long-term loan to Jaguar, where it was proudly displayed in the main reception area at Browns Lane.

It subsequently became part of the Woods Trust collection and until recently was on display at South Africa’s Franschhoek Motor Museum before returning to the UK.

Incidentally, by the time Coombs took ownership, the car had the UK registration number YSU 740, which is the number it still carries today.

It was originally registered XKD 573, but a picture of the car in the pits at Le Mans in 1957 shows it was registered NKV 479, so, unusually for race cars of the period, it has been re-registered more than once.

That same picture also shows the car with a black stripe running over it, and it has a full width windscreen.

Along with a ‘flexible’ tonneau, the latter became mandatory at Le Mans in 1956, so at some point this car has been restored to its original 1955 specification with the narrow wraparound ’screen in front of the driver and a fixed metal tonneau over the passenger seat.

Presumably, the bodywork was all yellow at that time.

The D-Type – introduced in late 1954 and produced during the following three years – was ground-breaking for its time, yet used many production-based components.

Girling telescopic dampers were used all round.

The D-Type pioneered the use of four-wheel (non-assisted) disc brakes, and the 16-inch Dunlop alloy road wheels were retained by triple-eared knock-off spinners.

Steering was by rack and pinion.

Fed by triple Weber twin-choke carburettors, a peak power output of 186kW was produced at 6000 revs with 336Nm of torque developed at 4500.

Depending on the final drive ratio, the D-Type was capable of reaching 280km/h.

At its Le Mans début in 1954, it was measured to be almost 20km/h faster down the Mulsanne Straight than the 4,9-litre V12 Ferrari.

Fuel consumption was said to range between 19 and 25L/100km under racing conditions.

Later D-Types featured fuel injection and around 212kW at 5750 revs, with a slight fuel penalty.

The XK 3.8-litre engine was fitted to some later cars.

Given this background, perhaps you can imagine the absolute thrill I felt at the prospect of driving this very successful racing machine.

Distinctive in its bright yellow paintwork, this rare short-nosed version – most D-Types featured a more aerodynamic long nose – was still in its ‘as last raced’ condition, which simply adds to the charisma — not to mention value.

Stepping over the high sill and dropping into the comfy leather bucket seat, gripping the wood-rimmed steering wheel and looking out over the louvred bonnet with its raised wheel arches and matching bonnet bulge was sheer bliss.

The car fired up with a harsh, resounding crackle from its dual exhausts, pinned alongside the near-side bodywork.

Fresh from a clutch rebuild that resulted in a stiff, in/out action, a strong application of revs caused the D-Type to simply catapult away, the all-synchro gearshift proving to be mechanically precise.

Although peak torque arrives above 4000 revs, once above 3000 the motor begins to kick in and the car simply rushes forward, the sensation heightened by being windswept — as the shallow, curving Perspex screen offers little protection.

The unassisted steering is not heavy and fairly direct, while the brakes are reassuringly firm and responsive — but, typical of cars of the period, applying power early on exiting corners simply causes the 6.50 x 16-inch Dunlops to step sideways, necessitating caution and concentration to avoid spinning off into the undergrowth.

Within a couple of laps, imagining the likes of Rousselle, Swaters and Frère driving this car flat out in daylight and at night-time, in rain and bright sun for 24 hours, earned my utmost admiration – the experience was a tactile time warp.

You can feel and sense everything the car is doing and the rush of wind is matched only by the adrenaline rush as you brake hard into a corner, turn in and wrestle with the steering as you power out of the bend, the exhaust’s decibels rising to an artillery crackle as the iconic XK’s revs climb back towards the red line.

Going back to that 1957 Le Mans, in an article in February, 1998 MotorSport magazine, Paul Frére reminisced that he and Rousselle could have won the race were it not for a freak glitch.

At 07:00 on the Sunday, the car was running second behind eventual winners Ron Flockhart/Ivor Bueb’s 3,8-litre D-Type when Rousselle stopped at Mulsanne with a dead engine.

Far from accepting his fate, Rousselle examined the engine and upon opening the distributor found that one of the platinum points on the contact breaker was missing.

He somehow managed a repair and was able to drive back to the pits where a new contact breaker was fitted and the car sent back into the fray.

By this time, however, the car had dropped to fifth place. It had lost 80 minutes in total over the 24 hours, compared with 13 minutes for the winners.

Determined drives saw them haul in and pass the Scuderia Ferrari 315S to take fourth place, but they were unable to catch the three D-Types at the head of the field, although on average they lapped quickest of the four Jaguars.

As to how many D-Types were built, reports vary between 62 and 70, but 17 ‘works’ cars and 45 production versions seems to be closest to the mark.

This example stands as an unmolested survivor and contributor to one of the most memorable periods in Jaguar’s history.

CHECKOUT: Hudson had it first (and the Commodore)