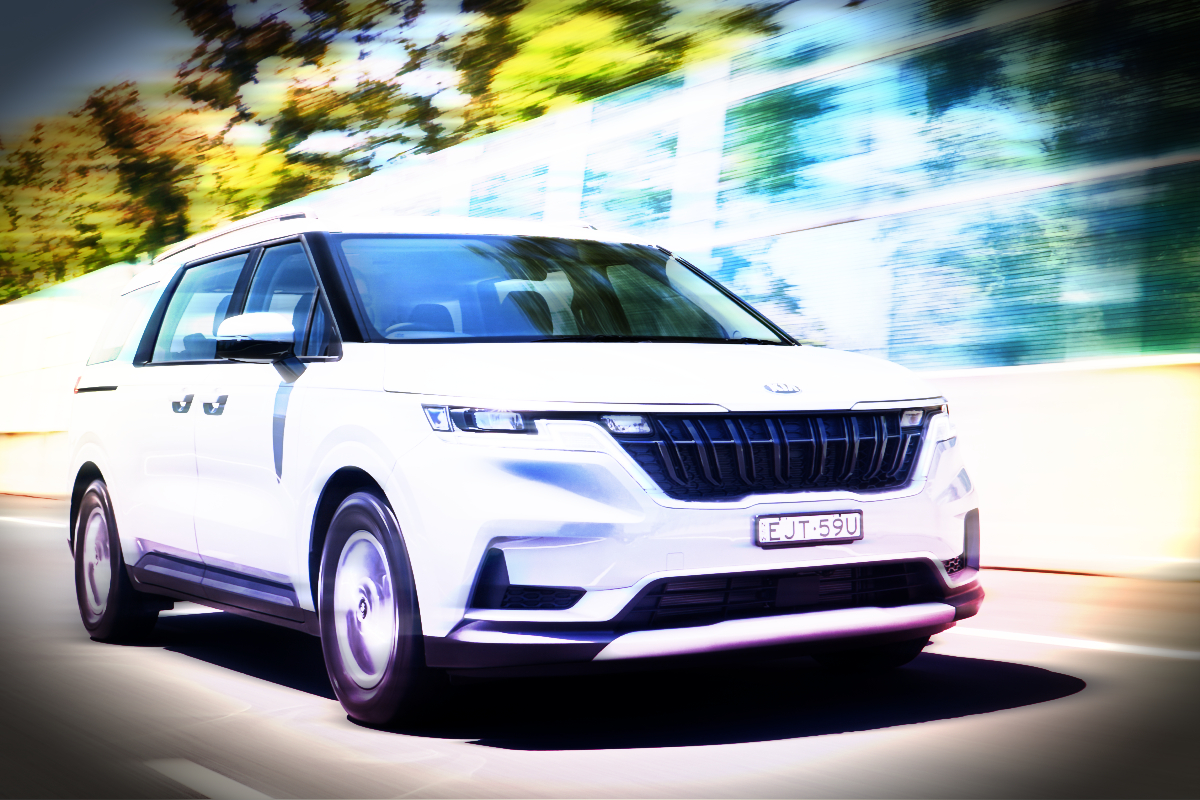 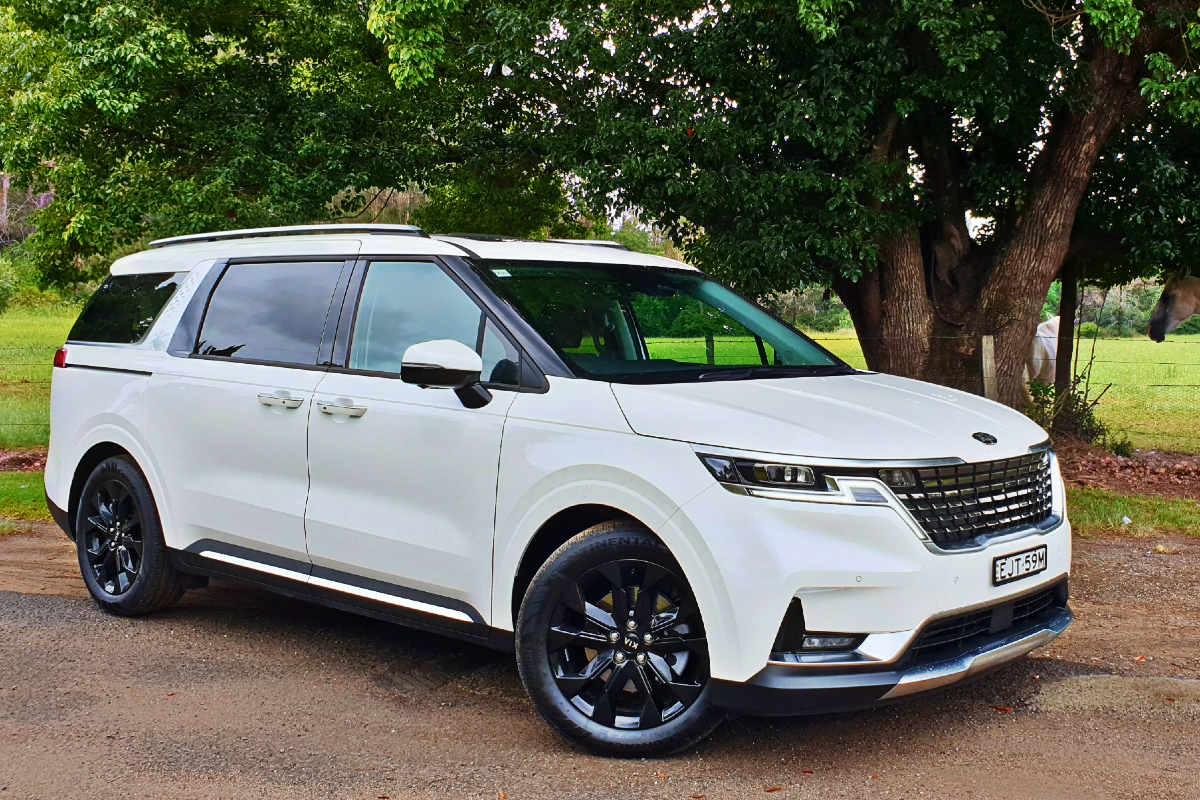 People movers were once the preferred method to move more than four people around on a regular basis.

Tarago, Grandis, MPV, Zafira . . . now only Odyssey and Carnival are left in the public mind, with Hyundai’s van based i-Max distant but affordable (not to mention the LDV G10).

Mercedes and Toyota have people movers, but their price and in the case of the Toyota, shape — put them out of reach.

It has a new look, is more refined inside and edges closer — some say — to an SUV.

We drove the range topping Carnival Platinum with the familiar 2.2-litre turbo diesel. 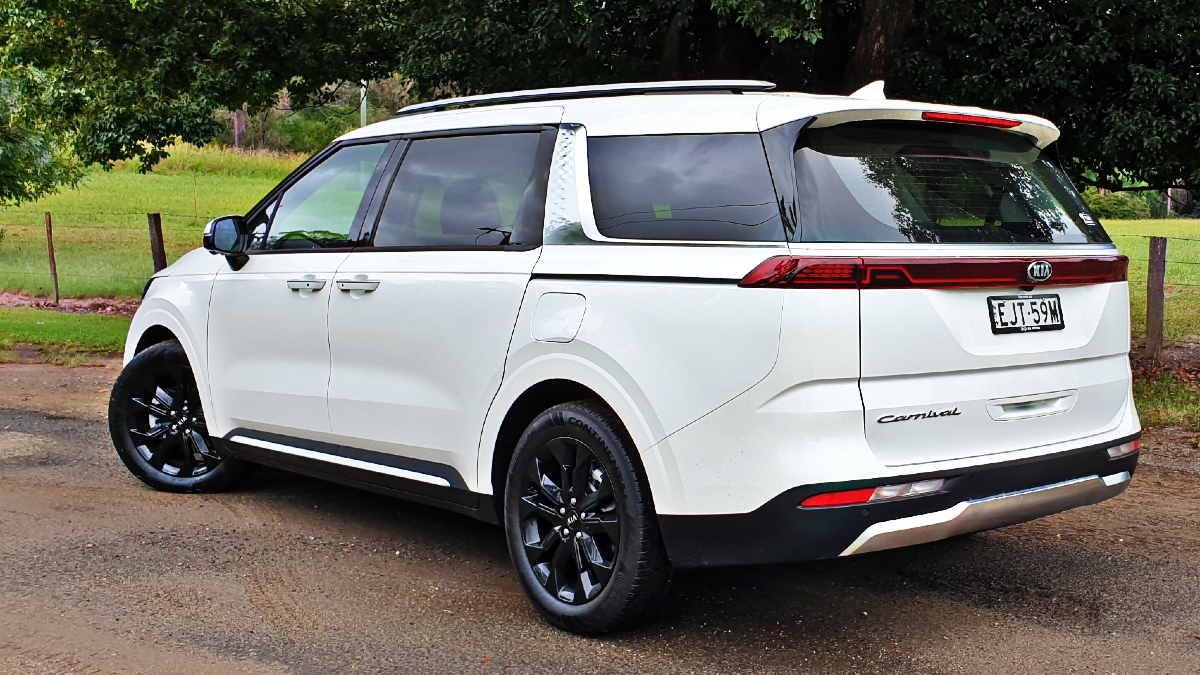 A tenner under $70K in vanilla white (our term) or slap on $695 if you tick premium paint.

There’s plenty of sheetmetal for the dosh and some very handy, family friendly features.

Key to what makes the Carnival Platinum a good egg are the powered sliding rear doors.

Activated remotely via the key fob, a press on the door handles, or touch of a tab inside, they quietly and efficiently slide open or close.

The same can be said for the tailgate.

It opens to reveal a huge cargo space or third row seats which seat three, along with the middle row that is also configured for three.

Have the key fob and stand next to the car and the doors will also open all by themselves.

Here we strike an issue.

The third row seats are manually operated, not powered.

They have a handle and a pull strap to move them up and down, and the design allows for the lower section of the seat to be placed into its recess — yet leave the back of the seat upright.

Not efficient, not safe, not well planned.

The middle row seats are also manually operated and there is a centre section that can be lifted out and turned around if desired.

By the way, Carnival is configured as an eight-seater, and this allows the centre passenger to face rearwards.

The question is, once released, how easy is it to relocate the seat?

Up front and Kia has moved to an ultrawide, one-block design that incorporates the driver’s instrument binnacle and touchscreen.

It’s a truly classy look, particularly with the piano black trim on the dash and console.

The review vehicle came in Snow White Pearl, with black leather seat trim, which colour-wise covers the tops of the door armrests, the steering column and parts of the dash in stylish contrast.

Drive is via a crystal-look dial, surrounded by subsidiary controls such as the hold gear button for the auto transmission.

There’s a nook for a wireless charge pad and ports for 12V and USB.

The driver’s seat has a two-position memory. Cup holders abound and there are also charge ports for the second and third row, plus roof-mounted air vents.

Outside and there are three notable changes compared to the now superseded model.

The front is longer in length but has a shorter overhang.

Headlights on the Platinum are fully LED, thinner, and have a restyled fin.

The rear is shorter as well, and the two separate, rounded, light clusters are now far more slimline and joined by an LED strip.

In profile the C pillar, the one between the middle and third row seats, has an alloy look fin that joins a window line to the roof, with the rearmost pillar, the D-pillar, blacked out to give the impression of a floating roofline.

It echoes the look seen on Hyundai’s new Palisade SUV.

It’s not to our taste.

There’s a hint of “gansta” in the stance, and in the metallic white contrasting with black painted 19-inch alloys, shod with 235/55 Continental rubber.

Being a family-centric machine, Carnival comes loaded with safety features.

This includes full length curtain airbags for centre and rear seat passengers, and a driver’s knee bag for all trim levels.

Rear Occupant Alert is Platinum specific and will effectively yell at the driver if the car is locked and seat sensors detect weight ie. a child left behind.

There are also five ISOFIX brackets for car seats. 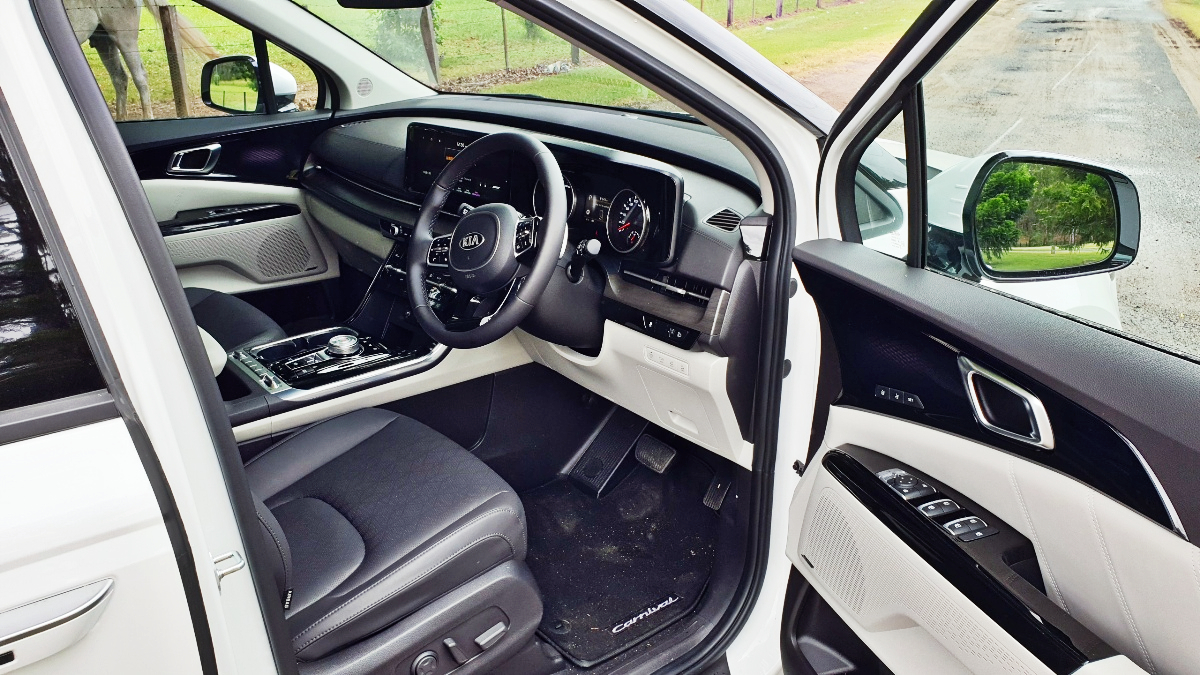 The diesel found here is familiar to anyone that has driven a Hyundai or Kia in the last decade or so — 2.2-litre, 147kW/440Nm and 8-speed auto.

The diesel is a low revving unit to produce that torque, with the full amount on tap from 1750rpm.

Even with the superb Continental rubber, the front tyres chirp and too readily at times.

There’s some turbo lag, but the engine spins up really easily, and throws that torque to the front wheels and chirp they shall.

It’s a wonderful highway cruiser, though, with those eight cogs swiftly and silently moving into place.

Economy isn’t terrible for such a big vehicle either.

That economy was mostly one up, not with a family and cargo.

It’s a fantastically tractable engine. However, we suspect that once loaded up, as per its design purpose, that economy would see plus 9s — perhaps even 10s.

Irrespective, it drives beautifully for a large, passenger-oriented machine, with adept handling, crisp road holding, spot on bump absorption and rebound, and just the right amount of tiller twirl.

There is a nimbleness to the whole thing and at over five metres in length, it simply doesn’t feel as big or as heavy as it really is (more than 2100kg dry). 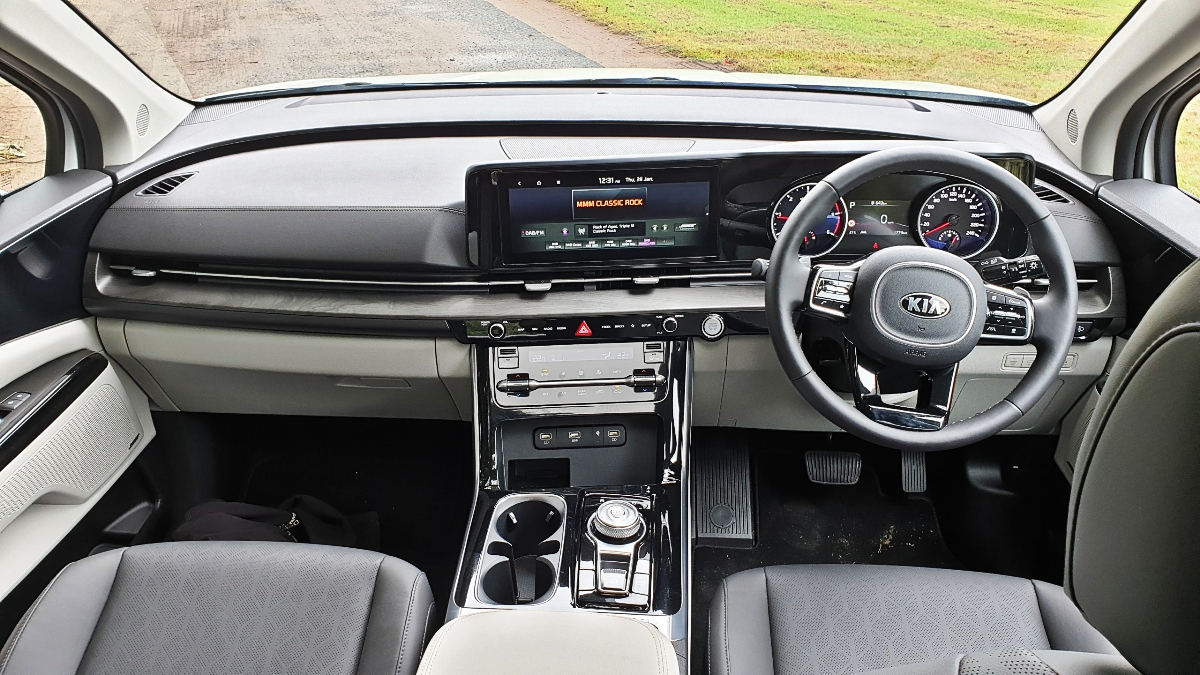 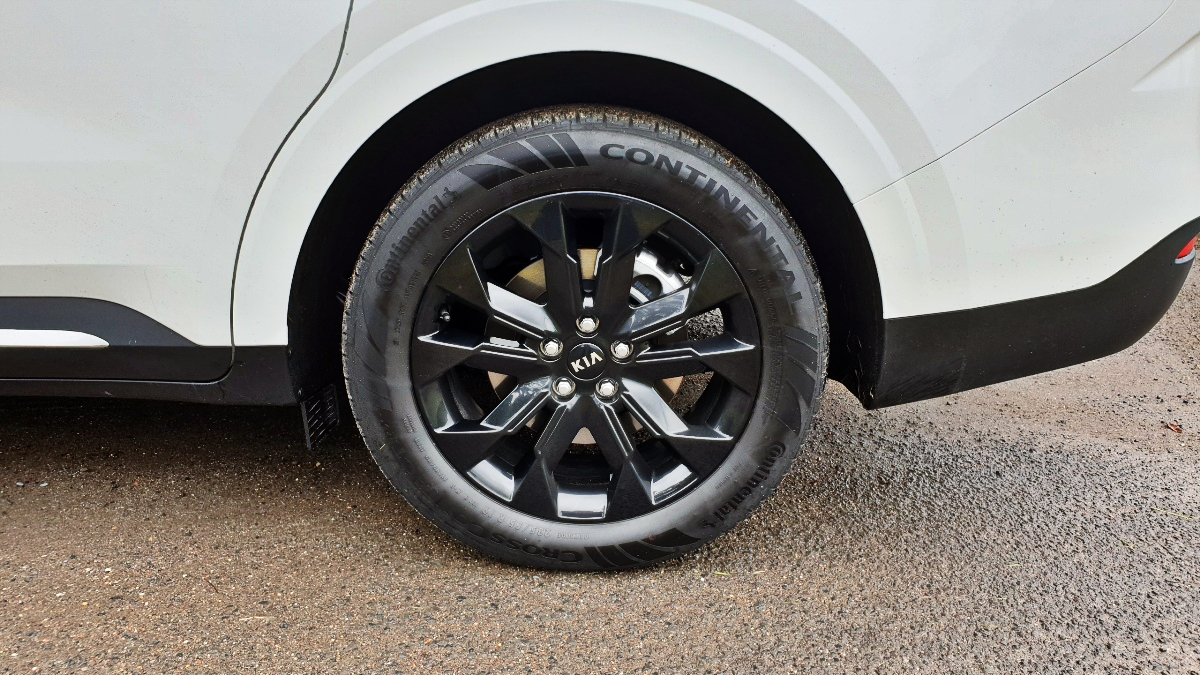 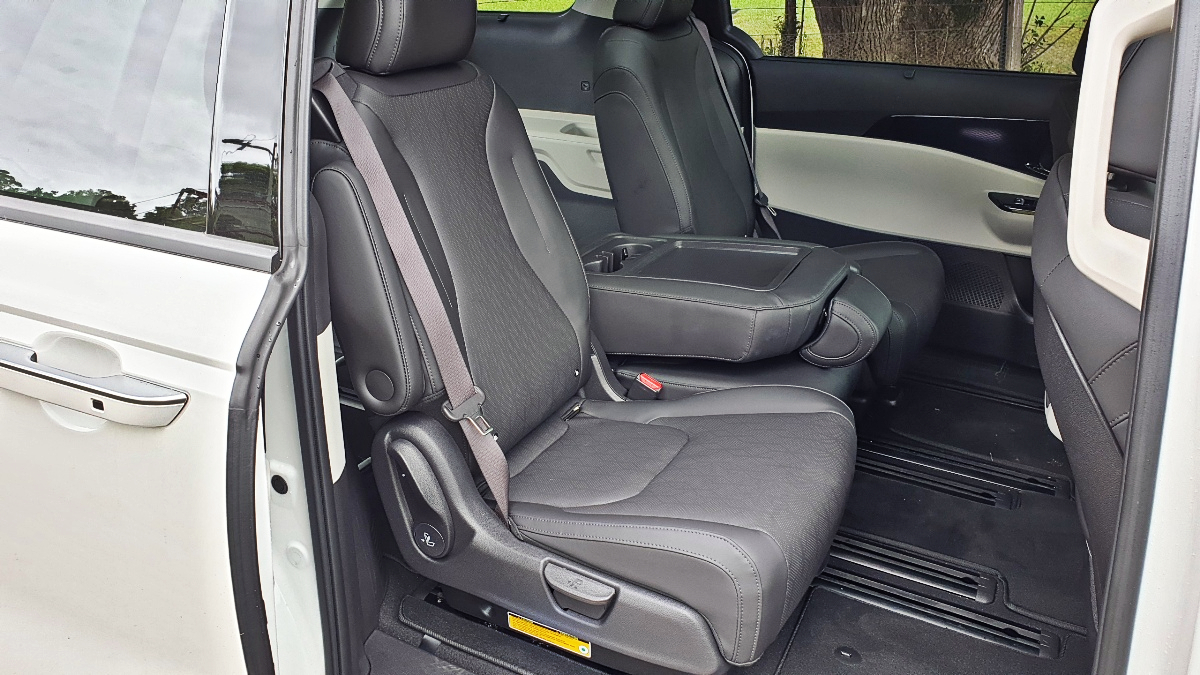 In a different price range, Toyota’s Granvia and the Vito/Valente from Mercedes-Benz are also outclassed in showroom movement.

There is good reason for this. Kia have refined the Carnival through its life and it’s a solid performer, with plenty of room for family and luggage if used in five-seater mode.

However, the diesel will work hard when the Carnival is loaded up and although still more economical than the thirsty petrol V6 that it also comes with. It’d be appreciably harder on the dino juice as opposed to the way we drove it.

Just a point of consideration . . . 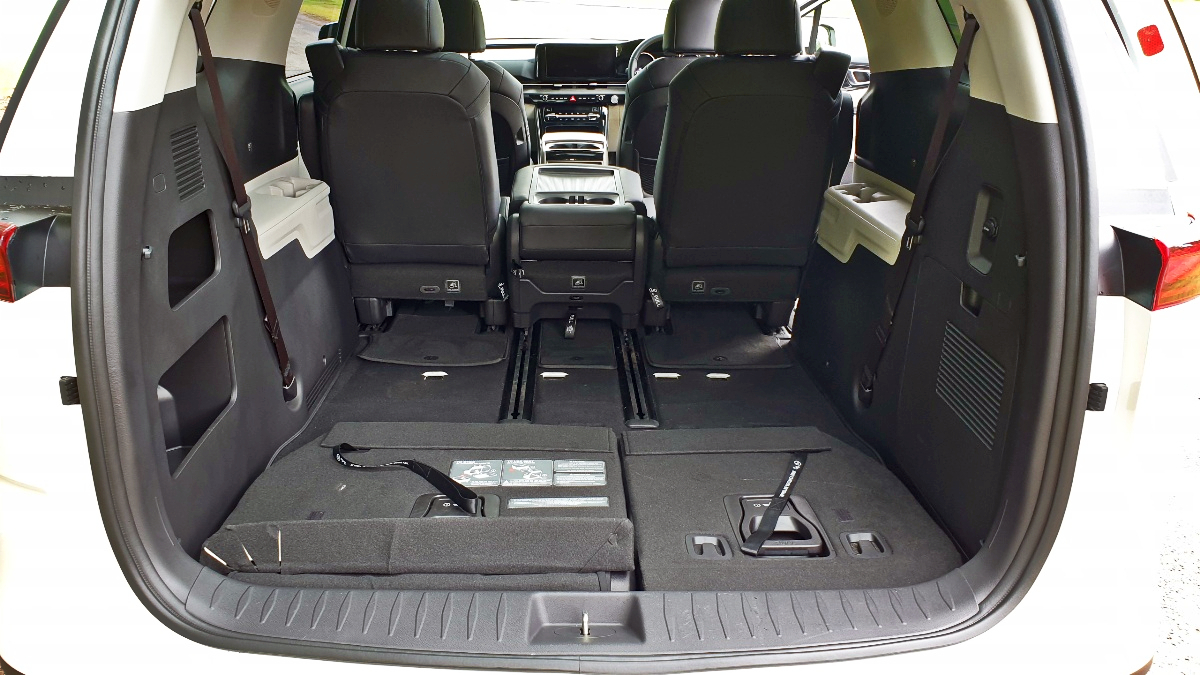