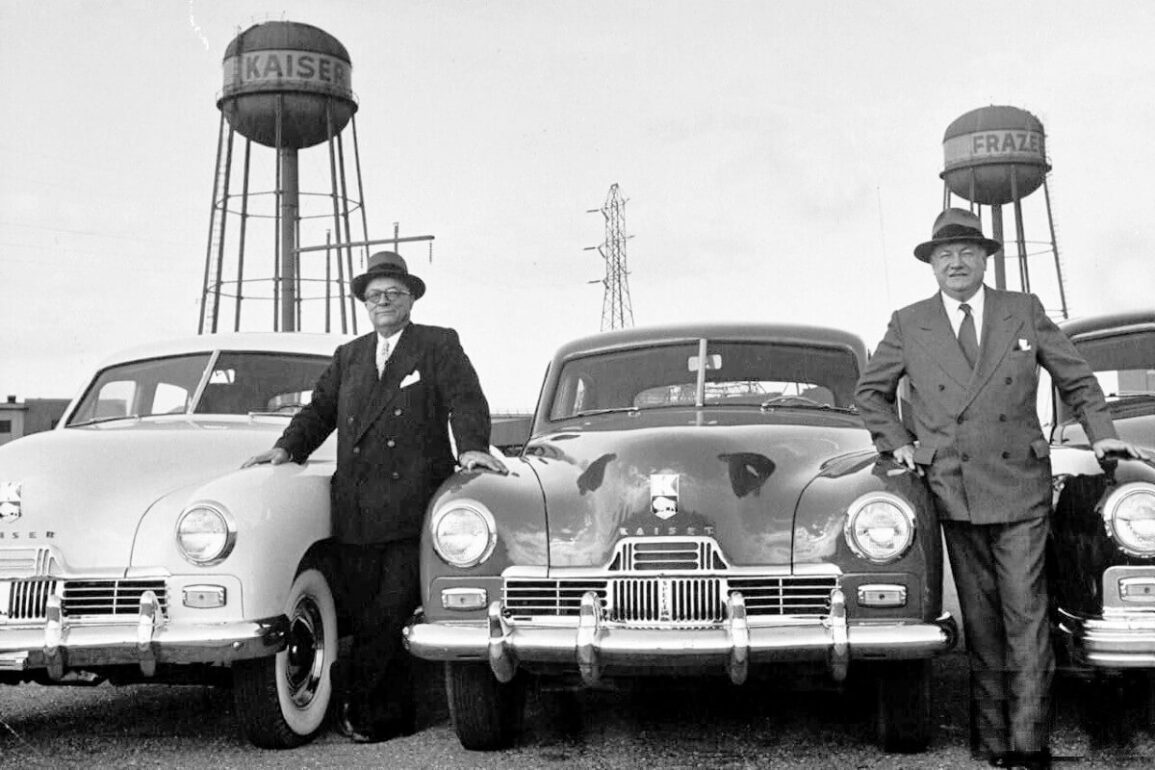 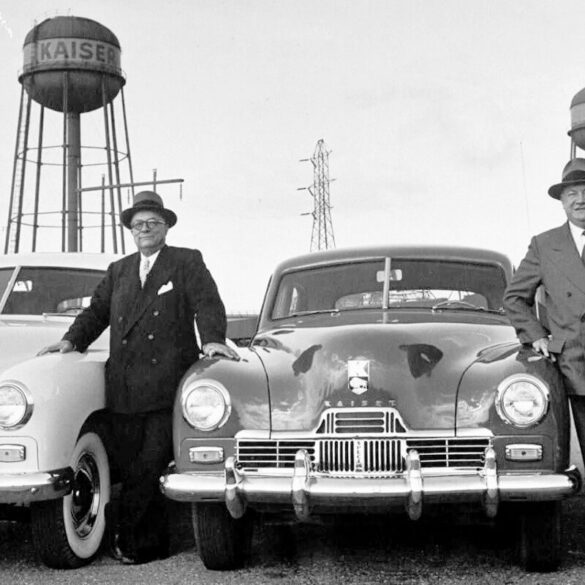 It’s more than 75 years since the fateful meeting of Henry Kaiser and Joseph Frazer.

It was mid-1945, at the offices of the Bank of America in San Francisco, where the pair decided to build their own car.

And we’re not talking about backyard billy carts — but the real deal.

Kaiser was a self-made billionaire, who had made his fortune in steel, aluminium, ship building, health care and construction.

Frazer on the other hand was a respected automotive executive, a man who had held senior roles at Chrysler and General Motors in his 20s and 30s.

Get this, he had named the “Plymouth”.

By 1939, Frazer was the boss of Willys-Overland and had the foresight to trademark the name “Jeep”.

In 1944, he was just your regular multi-millionaire, but decided he wanted to develop a stylish post-war car to compete against the likes of GM, Ford and Chrysler.

He bought the old Graham-Paige car company, called in the stylists and engineers and told them to have his new car ready for a 1946 launch.

That’s when he met Kaiser.

Kaiser had always wanted to make cars and the duo used Frazer’s company and his new car to form Kaiser-Frazer (K-F).

Kaiser and Frazer cars were quite large. Think Cadillac size.

They were positioned as competitors to Buick, Mercury and Dodge.

And in a booming late-1940s America, where any new car sold immediately, K-Fs did well and delivered profits.

But Frazer could see tough times ahead, especially for 1949 when GM and Ford would launch their first all new models since 1941.

K-F had only facelifted 1946 cars to combat the competition.

Complete new models were not due until 1951.

Frazer wanted to take a cautious approach, to reduce production and ensure profitability on every car sold.

But Kaiser disagreed and wanted to ramp up production.

The matter came to a conclusion at a board meeting in March, 1949.

Frazer did not have the numbers on the board to win the argument and he retired.

But, as things turned out, his prediction was correct.

Production went up and so did the inventory of unsold cars. K-F never made a profit again.

Meanwhile, with Frazer gone, Kaiser was free to develop his dream of a basic, affordable car — a 1950s Model T.

An initial design proposal by one of the K-F team, along the the lines of the forthcoming 1951 Kaiser, was rejected.

AMP made springs for car seats. They had never designed cars. So, you can see where this story is headed.

Talk about poor timing and missing the market’s needs.

The Henry J was launched just at the start of a decade when longer, lower, wider, glitzier, more comfortable and more powerful was trending exponentially.

By comparison the Henry J was spartan and stubby.

It looked like a 1948 Cadillac that had been shrunk to half size and on the way had lost every aspect of that car’s glamour and elegance.

The rear windows were fixed as were the front quarter windows.

Power came from a four-cylinder engine or optional six.

If the styling was not enough to deter buyers, the pricing was of minimal help either.

The similar sized and much better equipped Nash Rambler and Willys Aero and full-sized base models from Chevrolet, Plymouth and Ford were priced just 7-10 per cent more than the six-cylinder Henry J.

There was no contest.

Car buyers knew the difference between stylish value-for-money and ugly-cheap.

To make matters more complicated, Kaiser agreed the car would be also sold through Sears, Roebuck department stores as the Allstate.

That decision got K-F dealers offside.

In 1953 Kaiser bought Willys, renamed the business the Kaiser-Willys.

In 1963 it was renamed the Kaiser-Jeep Corporation and was sold to American Motors (AMC) in 1970.

Chrysler bought AMC in 1987, largely because Chrysler’s boss, Lee Iaccoca, wanted the Jeep trademark, which he considered one of the most valuable automotive brands in the world.

But wait, because our story doesn’t end here. There’s an Australian link to the Henry J . . .

It was Duncan McRae who shaped the in-house proposal.

Its rejection led to his resignation.

McRae subsequently worked at Ford and Studebaker, before he returned to Ford in 1964 — in mid-1969 he was appointed design director of Ford Australia.

CHECKOUT: My way or the Freeway?