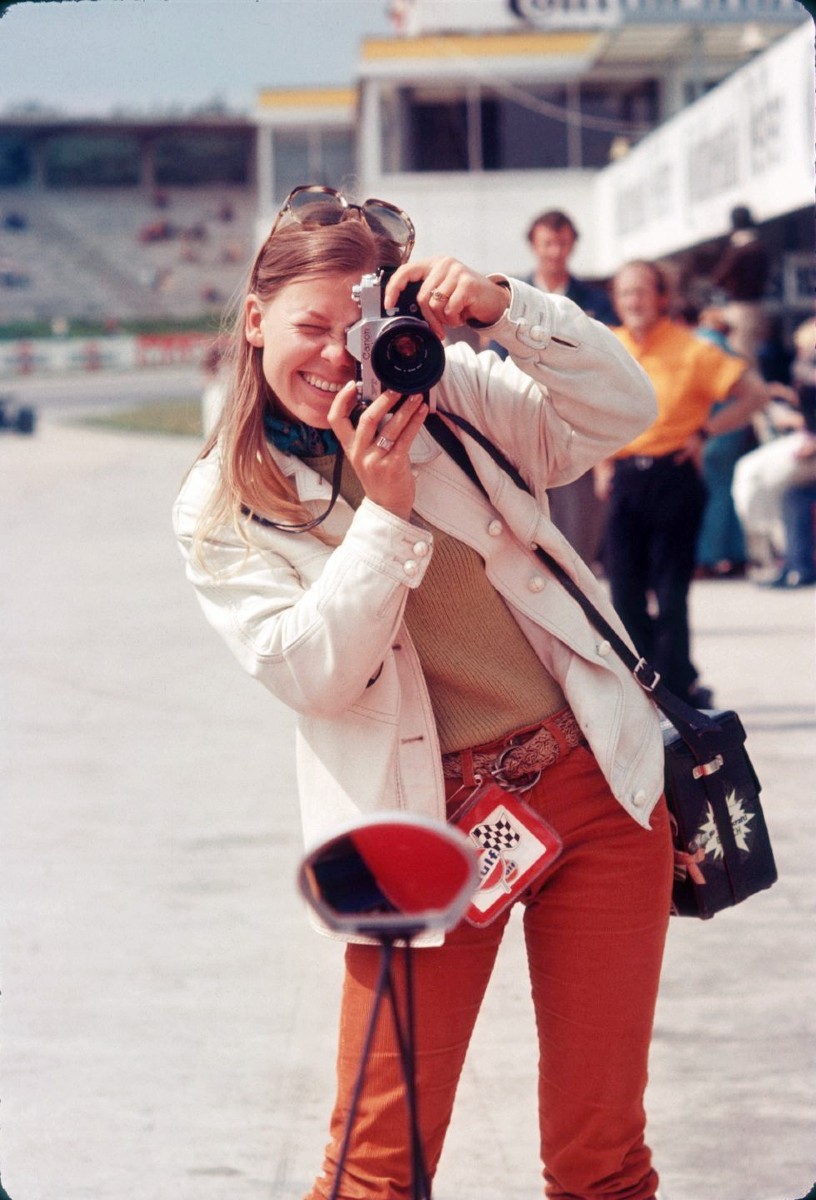 Another photo from the 1970s.
Wheel life
5 min read

WHO is the most prolific racing car photographer you know of?

But one of the best — and almost unheard of lensfolk– was Jutta Fausel.

German-born Jutta had a remarkable career that spanned several decades and generations of drivers, and in that time she captured a mind-blowing 186,000 pictures.

Starting in 1961, she shot images of Formula 1 and 2 races all over Europe and later the US and other parts of the globe.

Her work included world sports cars, Can-Am cars, Formula 5000, CART, Baja, and others — and appeared in a great many publications around the world.

Jutta was born in Zeuthen, in East Germany, and grew up  with her parents, grandmother, rabbits, chickens and a cat.

When she was 11, she and her mother crossed the border to West Germany, using ‘borrowed’ West German passports — and went by truck to Goeppingen near Stuttgart to join her father.

There, she finished school and worked in a local photographic shop where she learned all she could, and went to specialist graphic and photo school part-time for three years.

Jutta had always been interested in cars, thanks to her dad’s interest in motorsport, and started to attend races.

The first one was Formula 1 and 2  at the Solitude circuit near Stuttgart in 1961.

Sitting in the grandstand, she used a friend’s Rolleiflex and shot photos of a distant Jim Clark, Dan Gurney, Bruce McLaren, Jack Brabham, and Jo Bonnier — in a race won by Innes Ireland.

Those first shots weren’t exactly great, but to her, it became clear that it was what she wanted to do.

A year later, again for the Solitude race, she borrowed a Leica with a telephoto lens from her boss at the camera shop.

Sneaking into the track, and staying out among the trees, she took pictures of the cars, and got much better results.

Next day she squirrelled her way into the paddock area and began to take pictures of the Formula 1 drivers, crews, and cars up close.

A life’s passion was born.

From the beginning, Jutta wanted to share every picture with the people who were in them, and as a form of greeting, she would give the prints to her new friends in the paddock area.

Her break came when the editor of Automobil Sport magazine asked if she’s shoot some images for him and paid her 5 Deutschmarks per photo published.

It was the start of her professional career.

Jutta bought her own camera, and began to attend more races in Germany, including  at the famous Nurburgring and pretty soon she gained recognition as as a professional, selling her shots to an increasing number of publications.

She was published in more than 80 books and dozens of magazines and newspapers.

“My grandfather was a photographer, a war photographer in WWII, and my grandmother and my father told me, ‘A photo always tells the truth’ — which was true,’ she said.

Many of her shots were ‘personality’ pictures, of drivers or crew talking to each other.

She made lots of friends among the various racing teams and on her birthday one year she was invited to dinner with Bernie Ecclestone,  Jo Bonnier and Gordon Murray.

“There’s them and me at a table at the Belgian Grand Prix at Spa,” she recalled.

“And later there was an invitation from Colin Chapman to dine with the Lotus team.

“Colin Chapman, he always had dinners on Friday evenings. They had something for sponsors, you know, and that’s how I met Jimmy Clark.

“He was ‘a little bit my hero,’ she added, getting a bite wistful. “Oh, they were all nice drivers. Jo Bonnier, he was nice too. Later on, I met Mario Andretti when he drove the Lotus.”

Jutta also remembers the awful times when drivers died at the wheel.

“I was there when Pedro Rodriguez was killed at Norisring in 1971 (street circuit in Nuremberg).

“I saw the whole thing. It was just a little bit away from me. But the Monday after some of the major German magazines called me and wanted to have pictures of the crash.

“I said no. I would never sell a picture or have a picture published which was from a bad accident. Never.”

Particularly tough for her was the death of Jim Clark.

“It was at Hockenheim. It was pretty bad. Because he gave me, before he went out, he gave me his gloves, his racing gloves, the red ones with ‘JC’ and on them — and I was wearing them that day.

“It was slightly raining and  I was out there with Bill Gavin, a friend of Jimmy’s who later wrote the The Jim Clark Story.

“We were in the infield there, shooting. It was lap seven. And then Bill  came to me.

“He said, ‘Did you see him?’ I said no. He didn’t come back. So I looked at the start and finish. And I looked at the race director and the racing doctor, who was a very nice guy. And I saw the car going out with the doctor.

“And when I came to the pit lane, you know, there was the race director and some others.

On her 80th birthday recently, Bernie Ecclestone called to wish her well. So did Mario Andretti.

“We met in Germany in 1969 at the Nürburgring. After that, I would see her everywhere.

“She was part of the global racing community and she would always greet me in pit lane or anywhere our paths crossed.

“She always had a smile and it was easy to develop a friendship with her.

“Her passion for motorsports was obvious and she was doing what she loved — and was darn good at it.

“Even today when I look at old photos, I find myself thinking ‘That’s one of Jutta’s photos.’ I recognize her work and appreciate how good she was at capturing our sport. She is fondly remembered by many, many racers.”

Jutta married US racing car designer John Ward and now lives in Costa Mesa, California, where she goes by the name of Jutta Fausel-Ward.

But to many great racers of yesteryear, she’ll always be just the wonderful Jutta.

CHECKOUT: Greatest prank of all time?