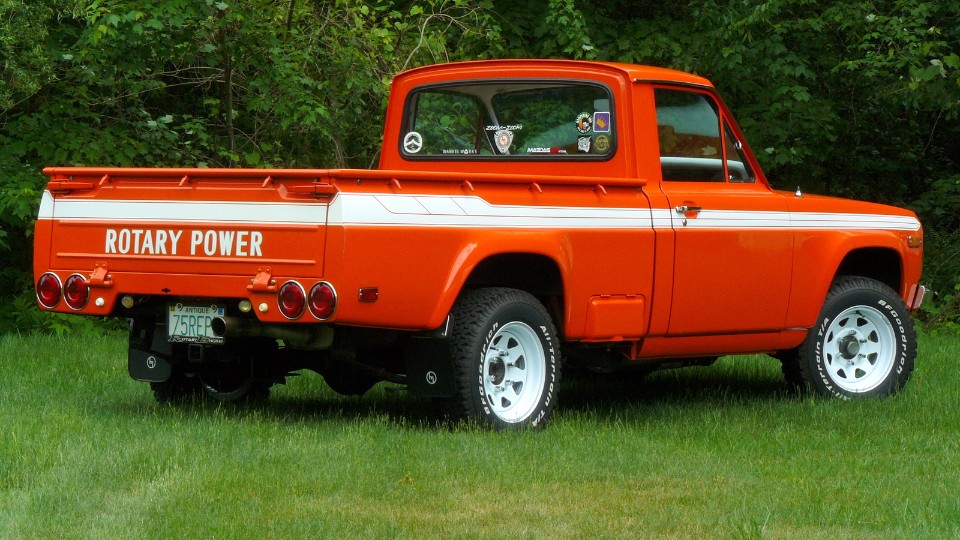 Along with a converted KIngswood, Mazda also produced a little known but highly prized rotary-powered ute back in the day.

The corridors of motoring history are littered with the remains of unsuccessful projects like the Mazda Roadpacer, a rotary-powered version of the Holden Kingswood sold in Japan.

Another is Mazda’s Rotary Pickup (REPU), the world’s first and only Wankel-engined pickup truck – or ute as we known them.

Legend has it there was even a rotary-powered bus.

The REPU was sold from 1974 to 1977 and appears to have been available only in the United States and Canada where it is now highly collectable.

Pronounced Rhee-Phoo, the Rotary Engined Pickup had a 1.3-litre, four-port 13B rotary, complete with four-barrel carburettor, flared fenders, battery mounted under the bed, along with a different dashboard, front grille and round tail lights.

It is estimated that just over 15,000 of the early B Series utes were built in total.

Most were made for the 1974 model year, after the energy crisis of the time put a damper on sales.

Mazda invested in a moderate redesign for the 1977 model, updating electrical systems, adding an additional 100mm in length to the cabin to make it more comfortable, plus a 5-speed manual transmission with differential gearing.

The rotary engine delivered fuel consumption in the order of 14.3L/100km.

After about 3000 units, however, the REPU was canned due to poor sales.

At the time Road & Track magazine was impressed with the “smooth, quiet power” and the “nice” interior of the ute.

“The engine is reasonably quiet and, as usual, butter-smooth as it pulls strongly up through the gears or merely accelerated impressively in top gear.

“As with the passenger cars there’s a warning buzzer to keep you from overdoing it, coming on at something over 6000 rpm. We used 7000 rpm as a limit and found the pickup capable of 0-60 in 11 sec flat and the quarter-mile in 18.3: not as quick as the fastest American pickup – but peppy indeed.”

Most of the remaining utes can be found on the west coast of the US and continue to be sought out by enthusiasts.

And, like many of the other Mazda rotary vehicles, this little powerhouse was also raced.

Its most notable finish was an overall victory at the 1975 SCCA Mojave 24 Hour Rally at the hands of drivers Malcolm Smith and Jack Sreenan.

Be sure to check out the Mazda Roadpacer