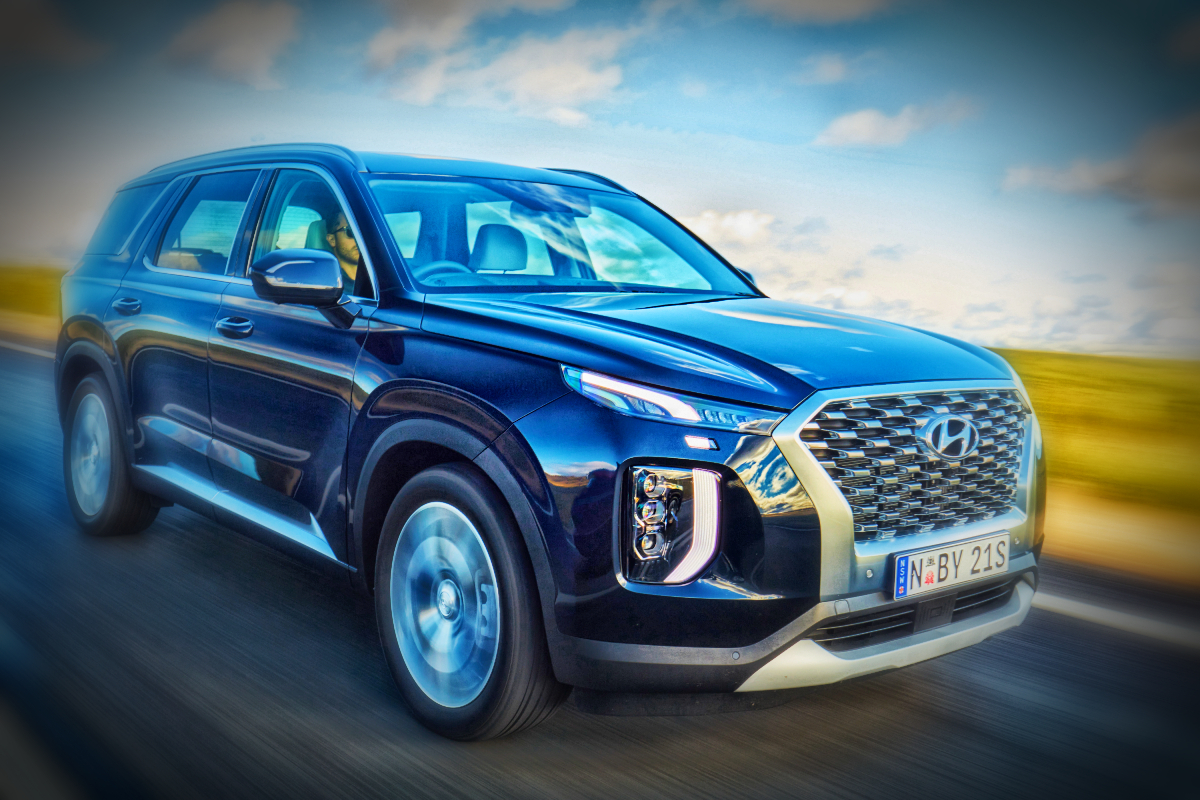 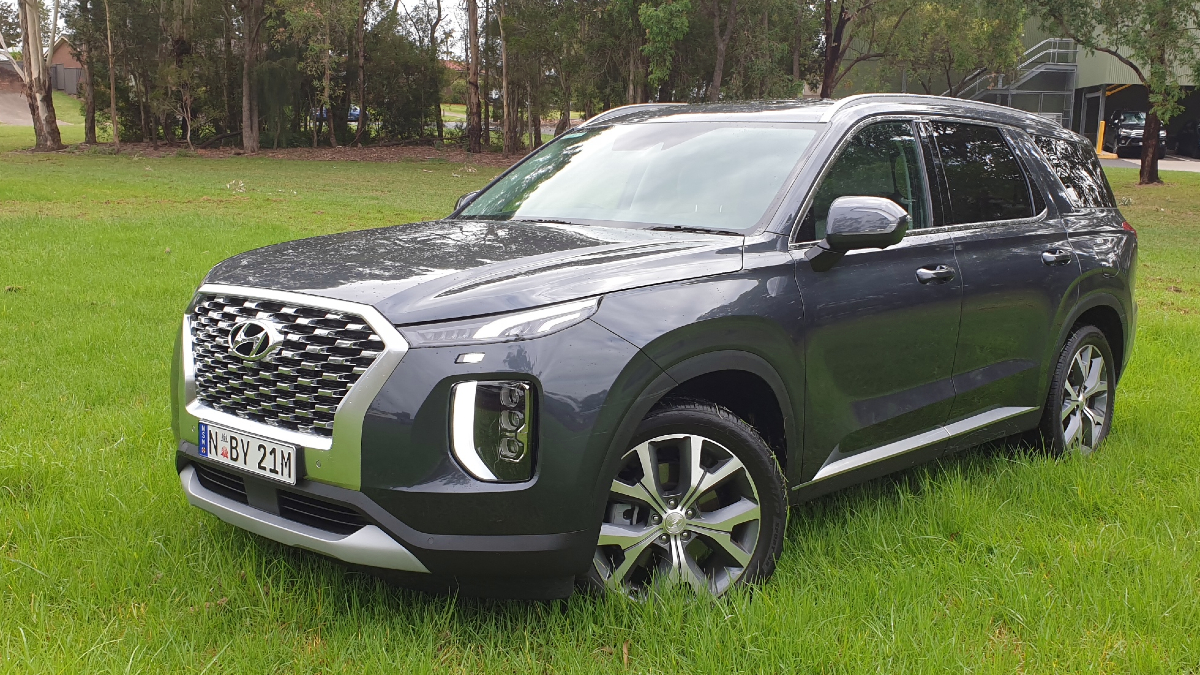 Hyundai confirmed in late 2020 that the big American-styled Palisade would venture down under.

The news was greeted, it’s fair to say, with a measure of trepidation and curiosity.

With styling that pushes the boundaries and available in a seven- or eight-seat setup, Palisade lobs with a petrol or diesel engine, front-wheel drive for the petrol, and an 8-speed auto only.

Yep, it’s been seen before in Santa Fe along with siblings Sorento and Carnival from Kia (with Carnival two-wheel drive only, of course). 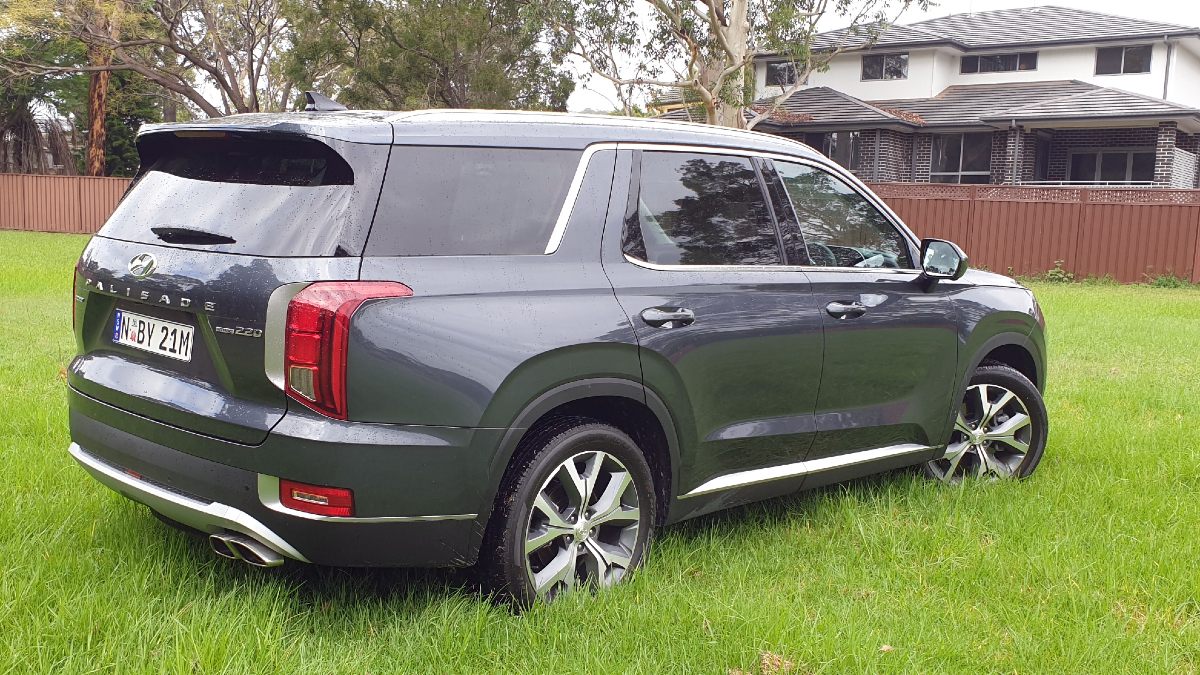 A buyer can tick the box for the eight-seater over the seven, by the way, for no extra outlay.

Transmission is a standard 8-speed auto for both engines.

Palisade is notably American in one key exterior feature.

American SUVs have a tendency to be styled with a prominent C-Pillar (beside rear seats) and a blacked out D-Pillar at the very rear.

These are the joins between the roof and the rear passenger door and tailgate.

This gives the appearance of a floating roof and, in a way, evokes station wagons from the 1970s.

Wheelbase (distance between axles) is 2900mm against 2765mm.

Clearly there’s a bigger body to deal with and that not to everyone’s taste rear window section.

What about the front?

At first glance it’s a bit much to take in. Yet, quickly, it becomes a sight that doesn’t look out of place.

C shaped driving lights drop vertically from the eyebrow LED lights, joining the mid-set headlights, and separated by a bar that is part of the extremities of the bumper.

The grille is more Genesis shield and there’s more Americana, with chrome in abundance around the grille, and an alloy look plastic for the lower section.

The rear lights echo this but in a more subdued way, folding into the rear sheetmetal and joining a subtle line that runs from front to rear.

It’s a look that caught the eye of more than a few during its eight-day tenure, and had some ask for more information.

Inside, it’s a sweet office to be in.

The review vehicle was finished in beige leather and wood trim, with black carpet in the rear and a flat cargo space cover for the third row seats.

There’s black on the back of the front and second row seats, which means when they are laid flat to provide cargo space it’s all the one colour.

The cargo area sits high, with 311 litres of space with the third row seats in use or 704 litres folded.

Hyundai’s own figures show the Santa Fe as 782L with the third row folded.

The centre console is a floating design, with a nook between the upper and lower sections that provides access to a couple of charge ports.

There’s also a USB port in the rear of the front seats.

The new, widescreen instrument panel sits over a smooth, easy to look at, dash.

Roof mounted air vents sit alongside a pair of glass sunroofs and for passengers there’s plenty of cup/bottle holders.

Oh, there are rain sensing wipers and rear wiper that self activate when reverse is selected via the push button drive engagement buttons.

The indicators are soft touch and can be set for three, five, or seven flashes.

We firmly believe in the law that says “sufficient indication must be provided” and three or five simply isn’t enough. 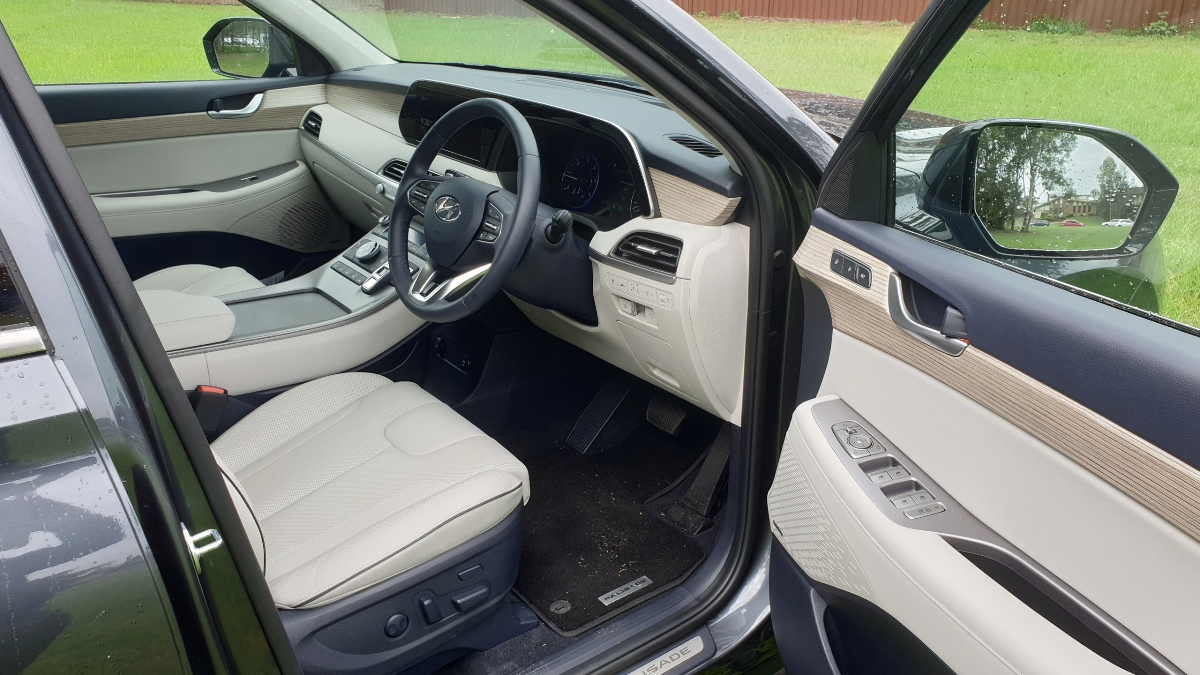 The diesel found here will be familiar to anyone that has driven a Hyundai or Kia in the last decade or so.

What was wholly unexpected but welcome was how good the Palisade drives.

It’s light, nimble, easy to live with day-to-day, and in no way feels as big as it actually is.

With a dry weight of 2059kg for the AWD diesel our 9.0L/100km final figure from a typical 70/30 urban/highway drive is a reasonable return, considering Hyundai quotes 9.2L/100km on the urban cycle — where it’s most likely to be used.

It’s nimble thanks to a steering rack ratio of 2.87 turns lock to lock and makes the near five-metre long wagon feel smaller, shrink-wrapped around the driver and passengers.

You’re waiting for the “but”.

That “but” is the engine. It’s well proven and as flexible as they come.

BUT, for the Palisade and its intended use — seven or eight seat transport — it would struggle.

Finally, a Sport worth talking about

It’s torque that moves and 440Nm suddenly starts to look not quite enough.

However, in our drive with mainly the driver, and occasionally two and three, it goes well and the suspension tune, apparently largely unchanged from US spec — is incredible.

It’s quick to damp out everything, minimises rebound quickly and is as compliant as the rubber mats used for yoga or exercise.

There’s initial absorption before it gently but rapidly firms up, providing a ride that wafts with more than a few hints of sport.

This ties in with the drive modes nicely, from Eco to Comfort to Sport.

The Palisade Highlander just thrilled from day one. 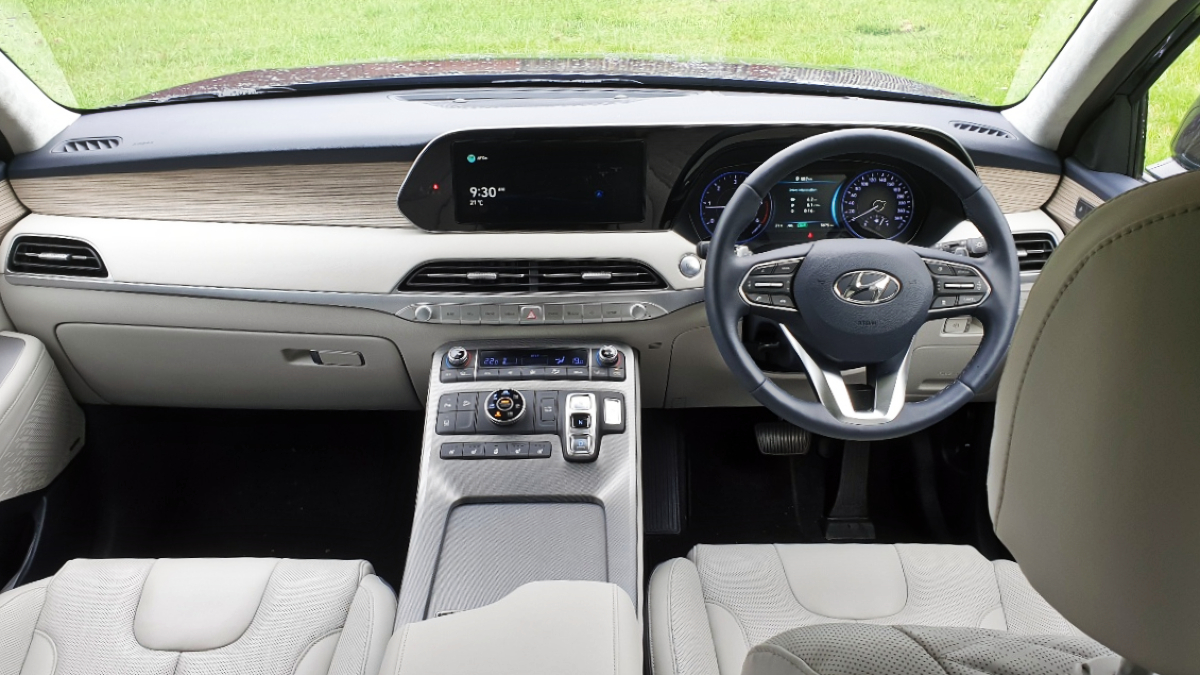 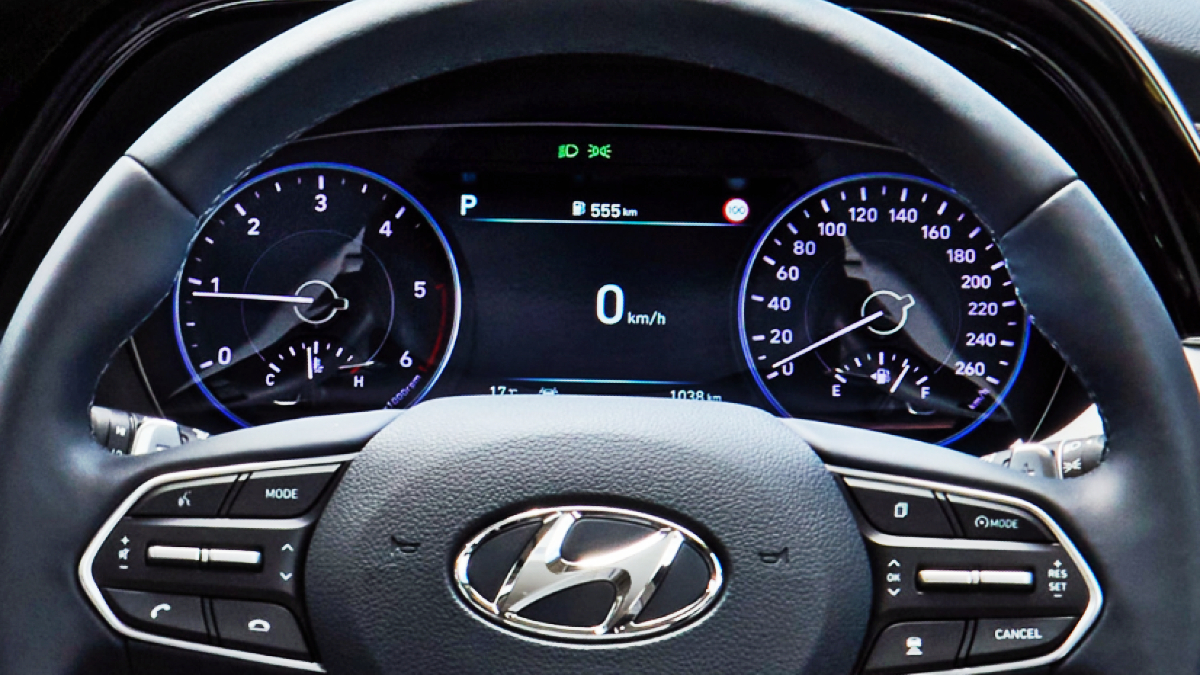 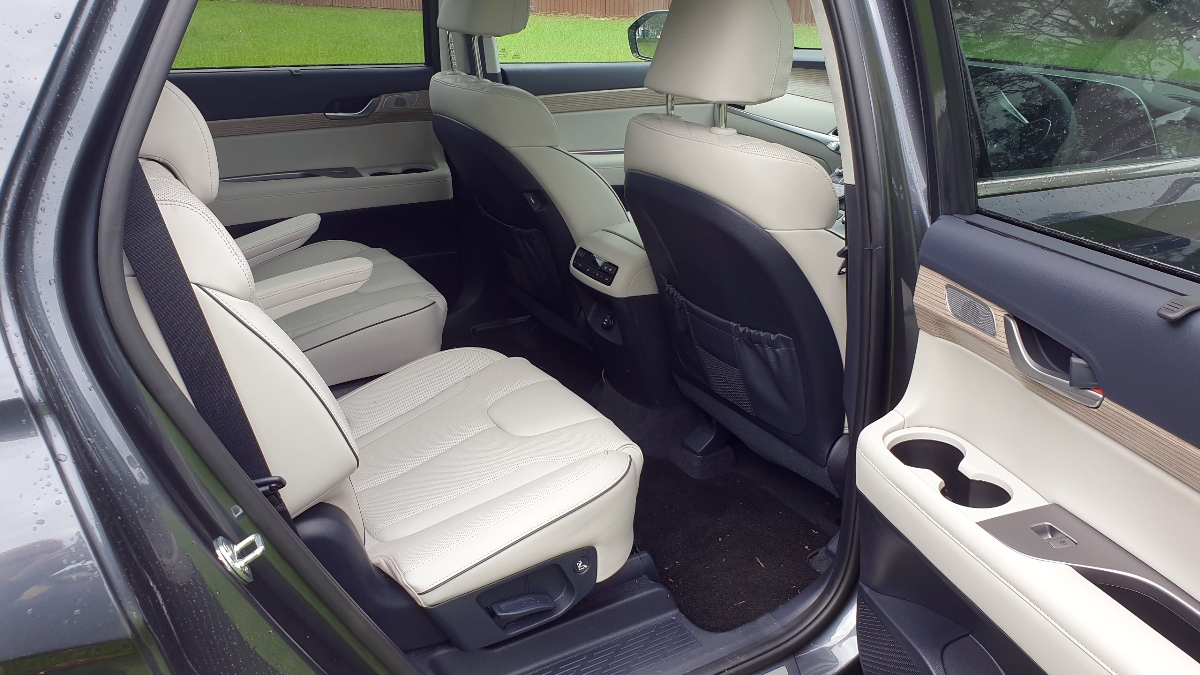 Firstly, Hyundai will find this sector a hard nut to crack.

Sadly, it’s because people still see Hyundai (and Kia) as budget brands. They don’t perceive how value packed their offerings are.

At $80K the Palisade Highlander diesel will see plenty of opposition from the Germans, a couple of British brands and some lower end (and smaller) offerings from Scandinavia.

But it more than stands strong and proud in its own right, with a luxury office space, brilliant ride and eventual (user dependent) good looks.

It’s a genuine winner in our books. 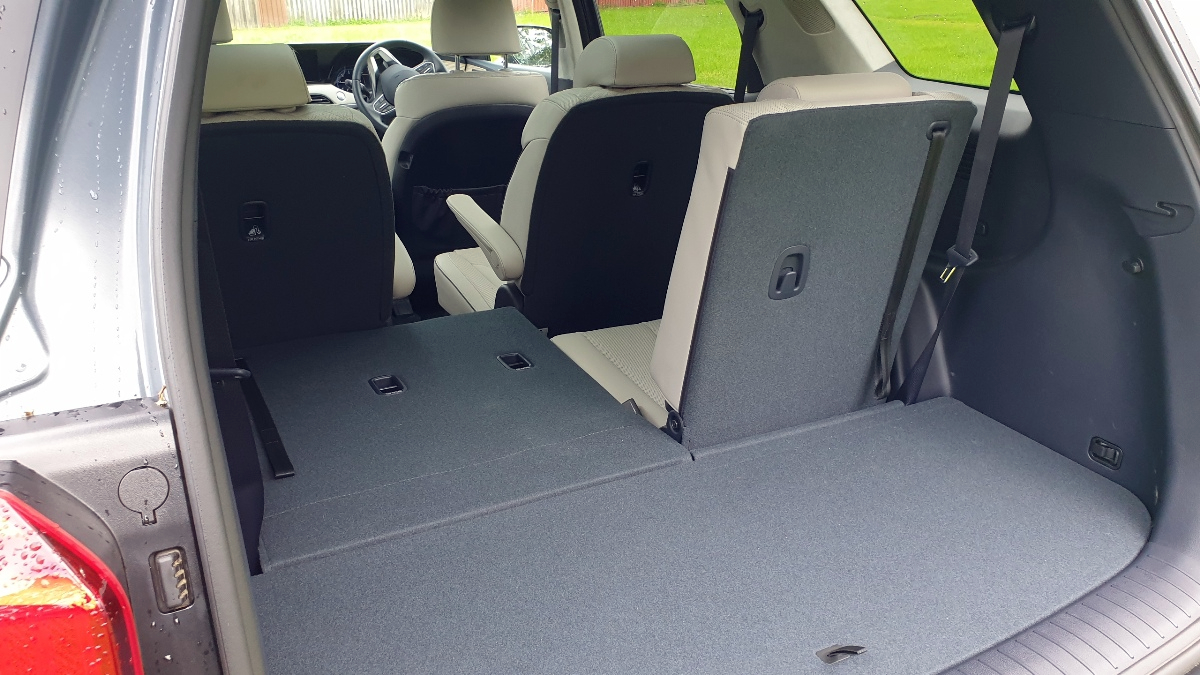 CHECKOUT: Hyundai gets into the robotics business

Check out deals on the Hyundai Palisade