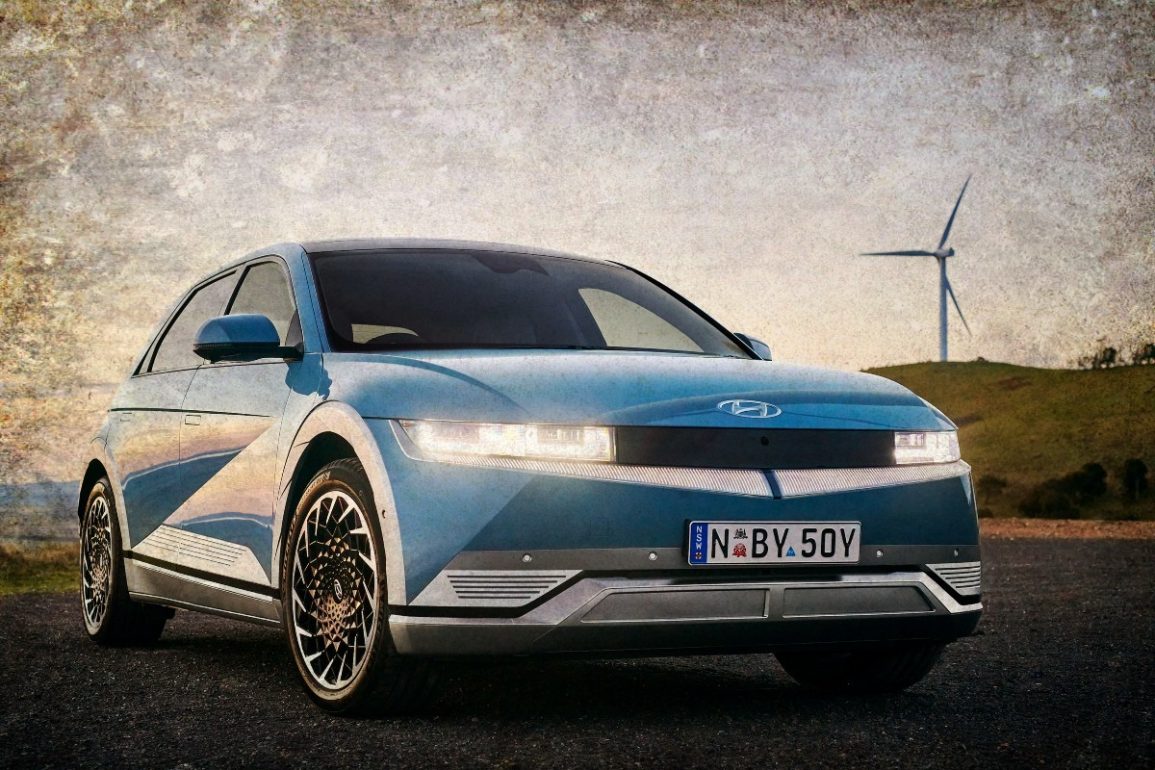 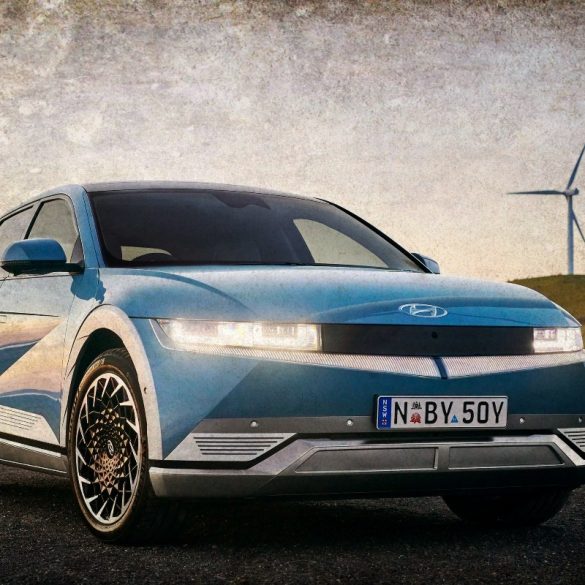 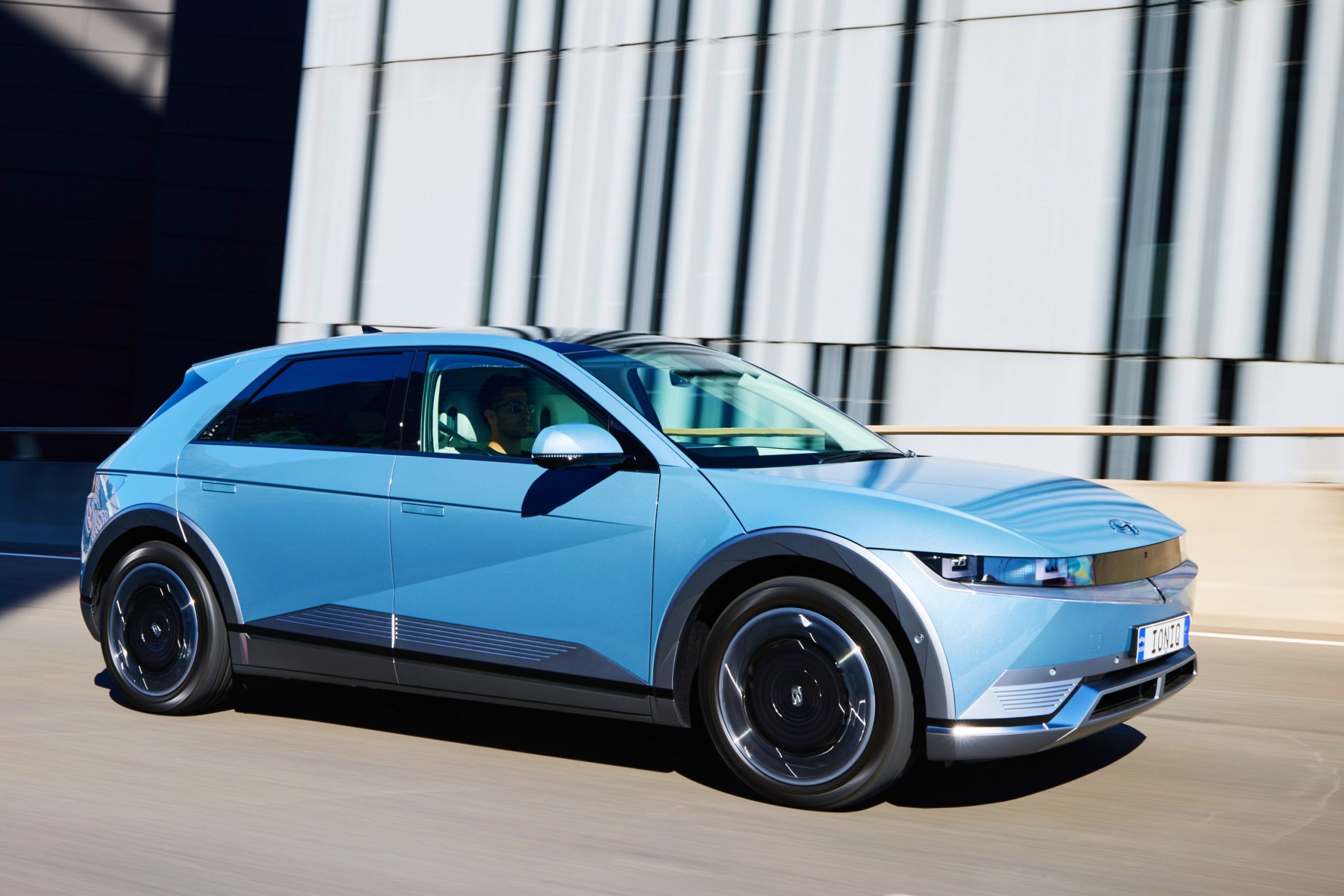 Those cheeky chaps from Monty Python may well have had the new Ioniq 5 in mind when they coined the catchphrase: “And Now For Something Completely Different”.

A futuristically-styled mid-sized SUV, the Ioniq 5 is Hyundai’s first-ever dedicated battery-electric vehicle, as distinct from the Kona SUV and Ioniq hatchback models which also come as hybrid and plug-in hybrid variants.

Although it carries Hyundai badging, Ioniq 5 is the first vehicle from the Korean company’s new sub-brand and joins the luxury Genesis marque — but with electric only models.

The existing Ioniq hatchback variants (hybrid, plug-in hybrid and EV) will continue to be sold as Hyundais, but future dedicated EVs including a sedan (Ioniq 6) and large SUV (Ioniq 7) will sell join the Ioniq 5 under the new brand name. 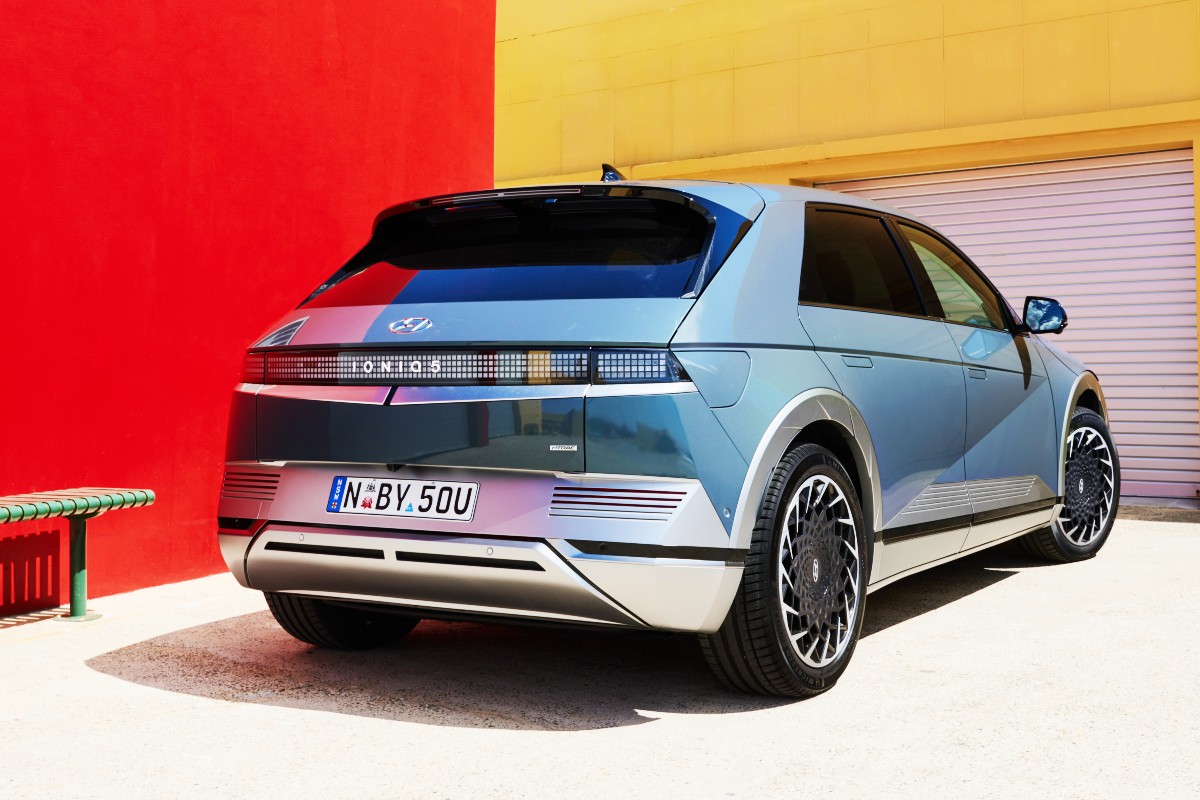 Ioniq 5 is available in one grade, with the option of a rear-wheel, single motor layout or dual motor, front and rear — all-wheel drive.

Our test car was the AWD variant with Hyundai’s HTRAC multi-mode system, finished in metallic Galactic Grey — one of six exterior colours.

As always there will be opposing opinions about the external styling and that’s even more likely when something as adventurous as Ioniq 5 comes along.

We absolutely loved everything about it, a few were non-committal — while one couple hated it.

One thing that was consistent as we drove the car around for a week was that it didn’t go unnoticed.

Although EVs don’t need a conventional grille, most models to date have been based on petrol or hybrid vehicles and so usually end up with a closed-off version of the grille.

Because Ioniq 5 is all-new from the ground up its designers have been allowed free rein.

The front of the car features two narrow glass strips, the top one with twin rectangular LED headlights outside of orange turn indicators on either side, with sensors and a camera in between.

Below there’s a full-width string of LED daytime running lights, while at the bottom there is a pair of air flaps that open when needed to provide cooling to the various pieces of componentry.

On the side a diagonal crease runs from high in the front doors down to the base of the rear ones, with a neat lined panel at the bottom of the doors.

The door handles sit flush against the doors and pop out when unlocked.

The wheels are 20-inch alloys with a complex design.

The exterior features a small square motif, most noticeable at the rear, with the name in the centre at the front.

Ioniq 5 has two 12.3-inch screens embedded in a single panel — a digital instrument cluster in front of the driver and an infotainment unit in the centre.

Sound is through a BOSE eight-speaker premium audio system.

Satellite navigation shows details of the closest charging stations as well as the driving radius that the remaining charge will allow the car to reach.

Standard safety features include seven airbags, front and rear autonomous emergency braking, front and rear parking sensors, blind spot monitoring including camera coverage, lane departure warning, and lane keep assist which can be temporarily turned off by those of us who like to steer the car ourselves without interference. 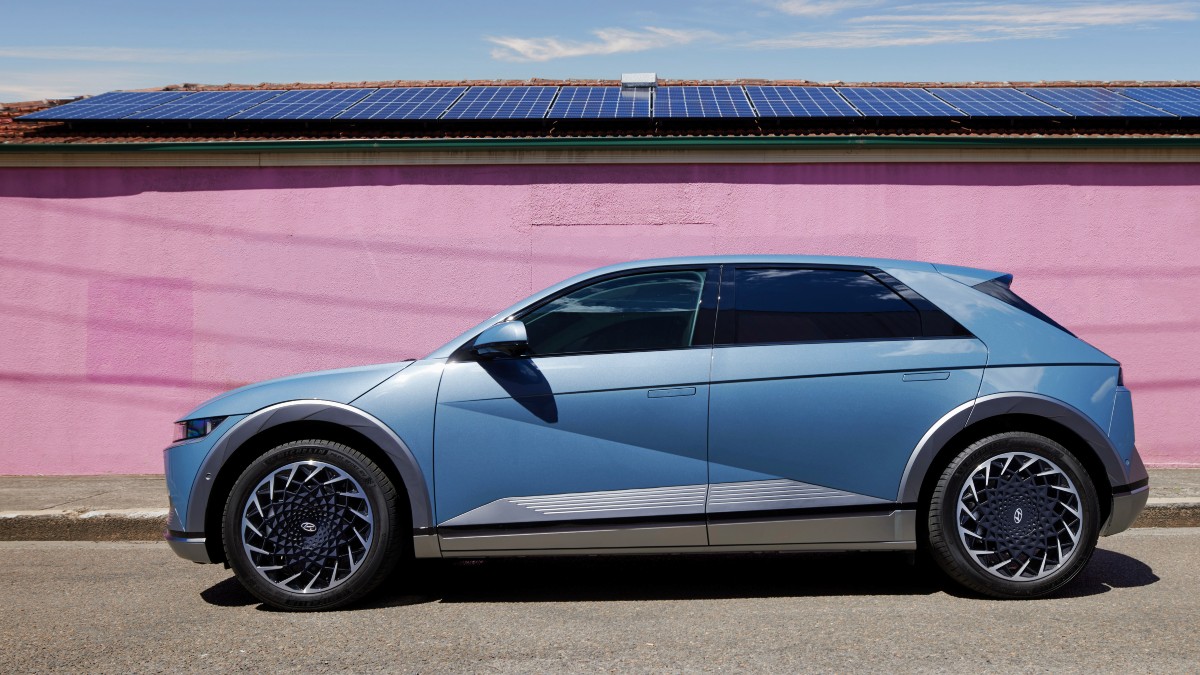 Ioniq 5 RWD has a single 72.6kWh battery mounted at the rear and produces 160kW of power and 350Nm of torque with a listed WLTP range of 451km.

The AWD version has batteries at the front and rear with outputs of 225kW and 605Nm — but less range at 430km.

The front seats are 12-way power adjustable and come with a ‘Relaxion’ (zero gravity) mode, perfect for lying back and having a quick nap while the car is charging.

Ioniq 5 has a three-metre wheelbase that contributes to a level of rear legroom that you’d get in a luxury sedan.

All seats are power adjustable with a memory function which can be set through the digital display screen.

A glass roof with a powered sunshade is standard in both models.

There are a number of “why didn’t someone think of that before?” features.

They include a padded bar that runs the length of the interior doors instead of conventional handles, a glovebox that slides in and out and a small magnetic pad on the right edge of the display panel where you can pin notes, photos, etc.

The charge point is at the rear driver’s side with both AC and DC sockets.

The cables are located under the front bonnet including a very clever Vehicle to Load device which plugs into the car’s AC port at one end and a standard power plug at the other, with multiple uses including providing power to another electric vehicle.

During our week we found a practical use when we had a black-out at home, but were able to plug in a kettle and have a welcome cuppa while we waited for the power to come back.

But it’s likely that anyone buying an EV will invest around $2000 in a home charging wallbox.

This will reduce charging time to around six hours while an ultra-fast charger can charge from 10 to 80 per cent in about 18 minutes.

We’re currently in the process of installing a wallbox at our home office.

It’s being provided by JET Charge, Australia’s leading installer of EV charging equipment, who partner with Hyundai as well as most other EV brands including Tesla, Volvo, Porsche and Audi.

We’ll do a follow-up story to report on how it all works out.

Pressing the unlock button on the key fob opens the door handles which sit flush against the sides of the car.

The driver’s seat is comfortable and supportive and the overall ambience of the interior sets the scene for an enjoyable travel experience.

The driving position is fairly high, even with the intrusion of the sunroof — and visibility in all directions is excellent.

The chunky steering wheel feels great but does tend to obstruct the driver’s view of the instrument panel and the steering wheel-mounted gear selector.

We love driving electric vehicles at the best of times, but Ioniq 5 takes that enjoyment to an even higher level.

It cruises effortlessly and with such a large amount of instant torque on offer that it can accelerate sharply when needed.

Smart regenerative braking to extend range can be adjusted through steering wheel paddle, with an i-Pedal feature that allows single-pedal driving.

There are three drive modes: Normal, Eco and Sport.

The only downside with the car is in the ride and handling, specially through corners where we found ourselves backing off.

Typically, most Hyundai and Kia models benefit from local tuning, but that didn’t happen with the Ioniq 5 — possibly because of Covid-19 travel restrictions. 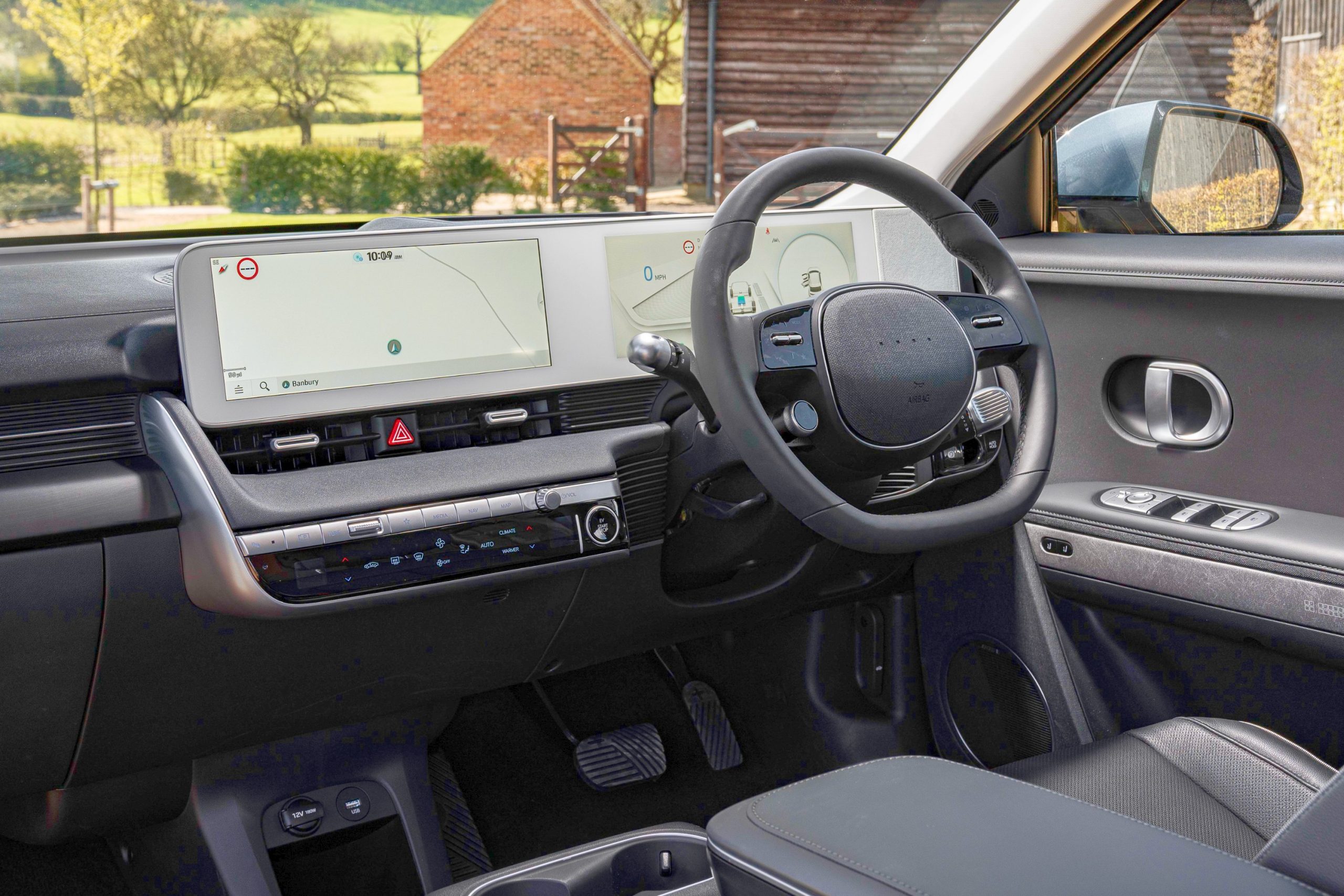 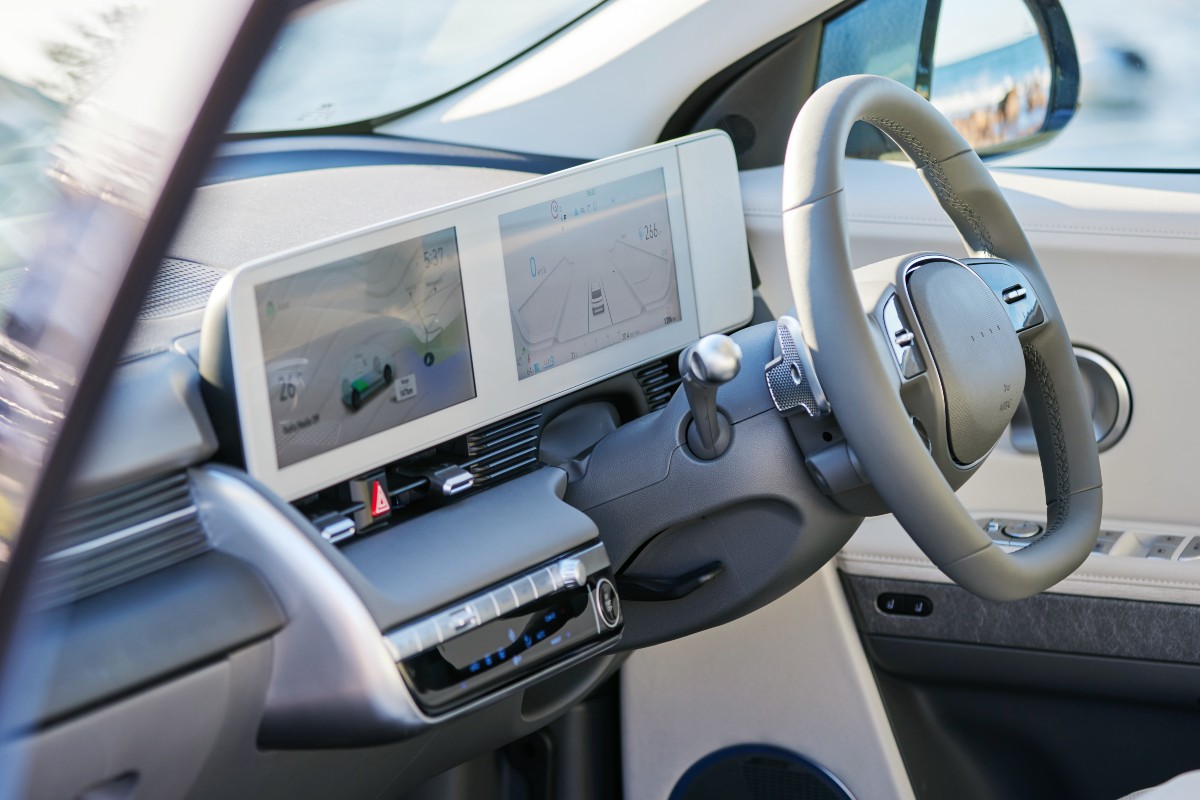 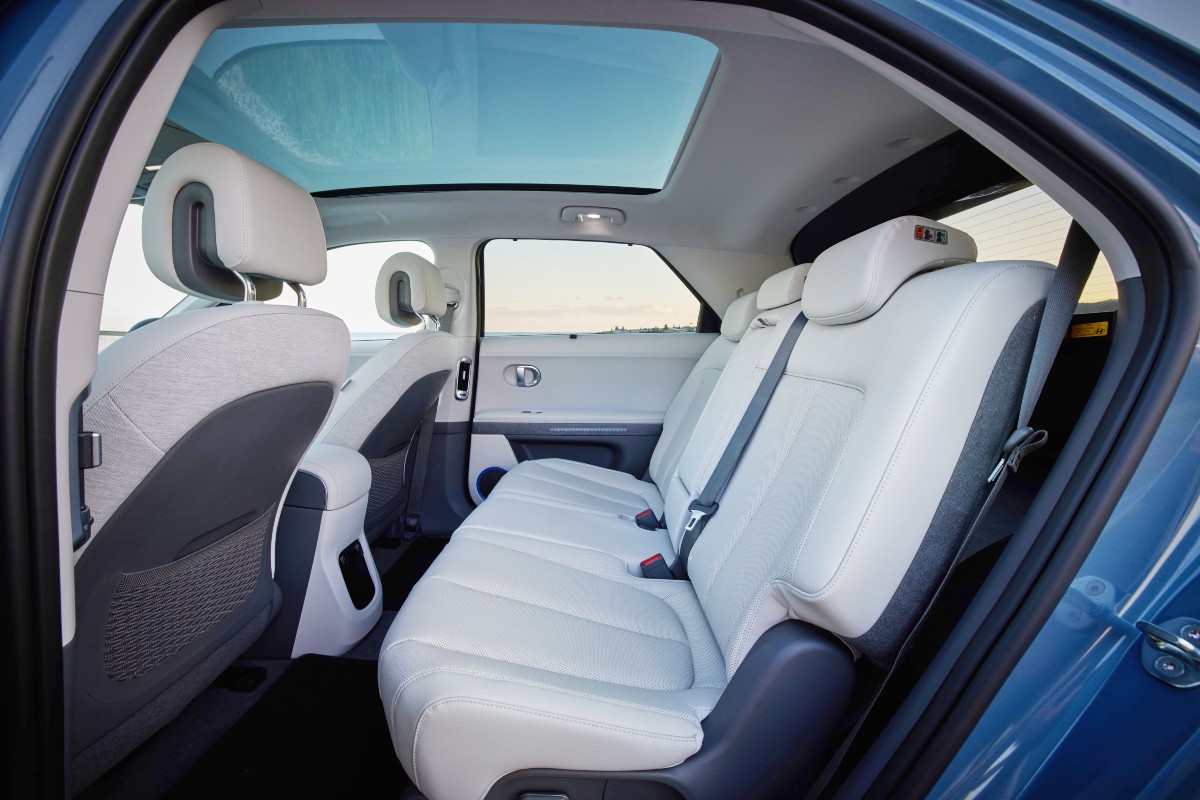 Motoring journalists are inevitably asked what their favourite car is?

After spending a spending a week behind the wheel of the Ioniq 5, it certainly deserves a podium spot.

With ride and handling tweaks, it would likely move to the top position.

We love its exciting styling, inside and out, and its bright, spacious, airy interior.

No review of an EV can be complete without reference to the price/range equation.

All EVs are very expensive when compared to conventional vehicles, including hybrids.

Offsetting the high price, its potential range of up to 450km makes it more practical than many of its competitors.

If you’re willing to trade-off a lower range for a more affordable price, a base model Ioniq 5 will arrive here at a date to be advised. 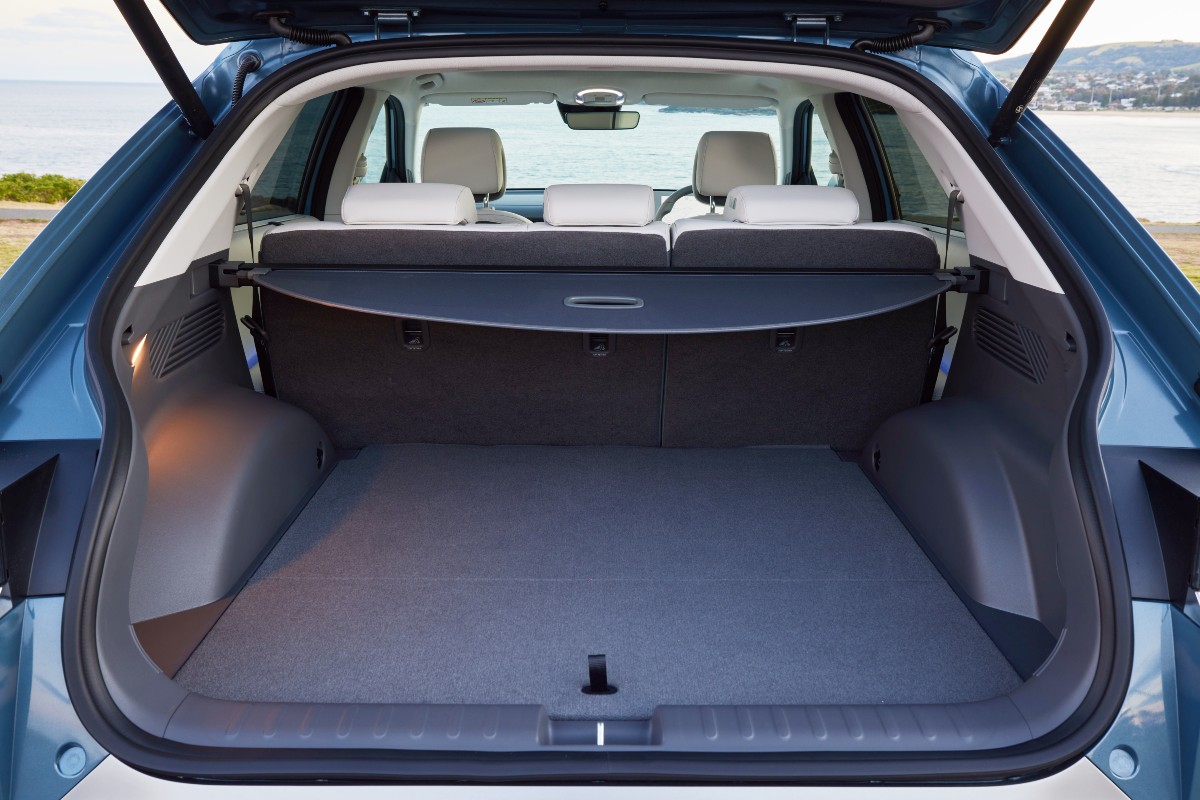 Check out deals on the Ioniq 5