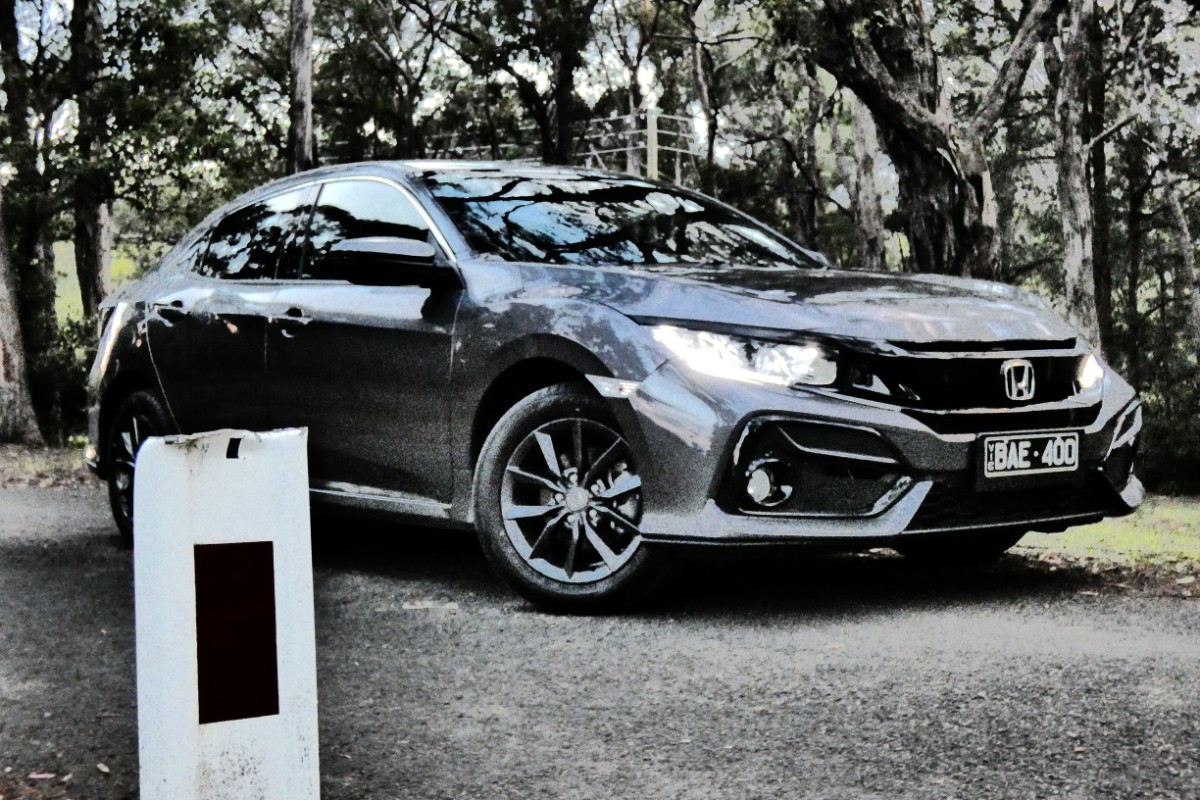 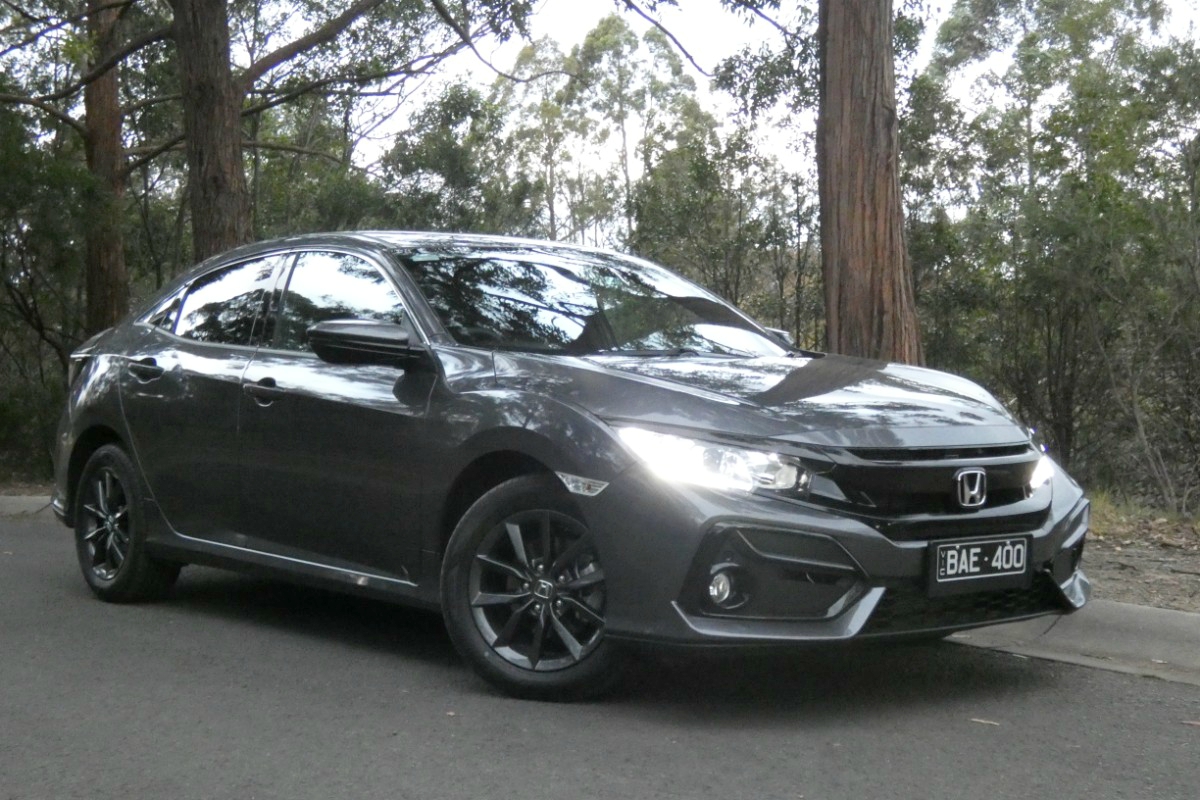 I’ve driven several Honda Civics before, but it’s the first time I’ve been able to catch up with the 1.8-litre version which powers the VTi and VTi-S grades.

The hatch was updated at the beginning of the year with subtle styling changes and new wheel designs, which includes new front and rear bumpers that incorporate body coloured accents in the new lower panel sections, along with a new front grille design.

Civic is Honda’s longest-running nameplate and its best-selling model globally, with more than 25 million sales since 1972.

Here in Australia, more than 360,000 Civics have been sold since the first-generation vehicle went on sale locally in early 1973. 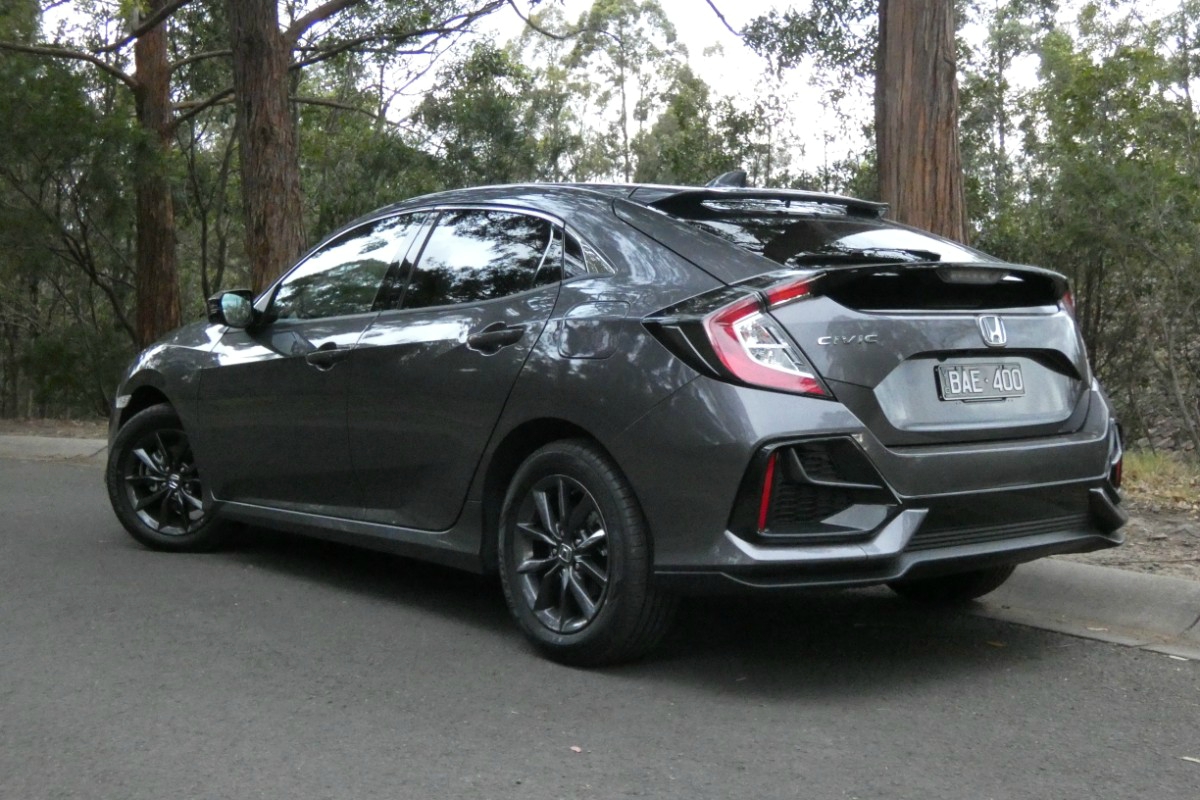 Hatch and sedan are priced the same.

The boy racer Civic Type-R with its large rear wing is another thing altogether and considerably more expensive at $51,990 (and available only as a hatch).

The 7.0-inch infotainment unit supports voice control, with Bluetooth phone and audio streaming, AM/FM radio and a couple of USB ports, as well as Apple CarPlay and Android Auto — but misses out on satnav and DAB digital radio.

VTi and VTi-S miss out n the Honda Sensing system with all its safety features — and that includes Autonomous Emergency Braking which is fast becoming a defacto standard.

VTi-S however supplements these features with its odd LaneWatch system that basically provides a camera view of your left hand blind spot when the indicator is activated — but no coverage of the driver’s side.

The car still gets a five-star safety rating with six airbags and a reverse camera, the latter with a birds-eye mode. 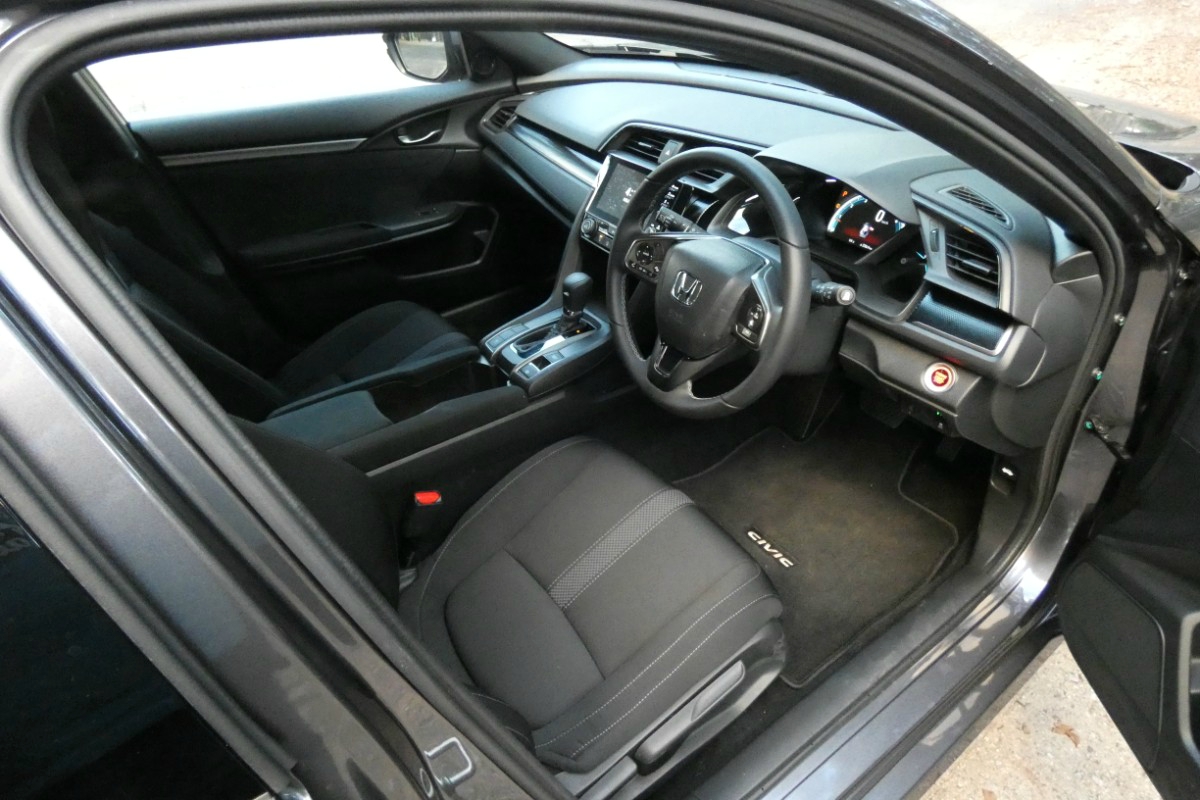 Although it’s classed as a small car, it’s really a half-size larger again, with a surprisingly spacious cabin.

Instruments are big and easy to read, controls are well laid out and intuitive to use.

There’s a nice big digital speedo and the steering wheel sits snugly in the hands.

The wide-fit seats are also comfortable and supportive, with plenty of room for four full-sized adults — and a large boot for their luggage.

But transferring from another make and model, we became immediately aware of the level of background noise that penetrates the cabin, a problem that also plagued the previous generation.

The design changes continue inside, with updates for seat trim and instrument panel, plus improvements for audio and ventilation controls.

Good to see the introduction of some physical knobs and buttons for the touchscreen, with a real volume control knob, and press buttons for frequently used Home, Audio, Telephone and Back — as well as the air con system.

In comparison the 1.5 turbo in more expensive grades produces 127kW and 220Nm, the latter over a wider range.

Either way, the 1.8 unit is a typical high-revving Honda affair, with a CVT style, continuously variable transmission to get power to the ground through the front wheels.

The CVT offers seven steps or simulated gears, although not always obvious, but this model misses out on steering wheel mounted gear change paddles — the little things that let you click through the gears.

Unless you count the S and L settings for the transmission, there’s no sport mode, but you do get an ECON setting, presumably to reduce fuel consumption.

Ride, handling and general on-road dynamics are a revelation.

One of the hallmarks of the current Civic is the solid, planted feel it has on the road, and the hatch doesn’t disappoint, hugging corners at speed with a low centre of gravity.

In normal, day-to-day driving, with one or two people aboard, performance is more than adequate.

But start pressing the point, starting pushing the pedal to the metal, and more demanding drivers could well be disappointed.

And, to really get going, you need to flog it mercilessly and that’s when the CVT reminds you that it’s there — exhibiting the distasteful zoominess that characterises CVTs.

Dropping the tranny back to the S position, a defacto sport, has the affect of keeping revs above 3000 rpm where the power is accessible, and results in a livelier drive experience.

But it’s ride quality and handling that is most impressive, even on bumpy old back roads, where the Civic easily absorbs irregularities in the road surface and it sits amazingly flat in corners even pushed hard.

The brakes are rippers too. 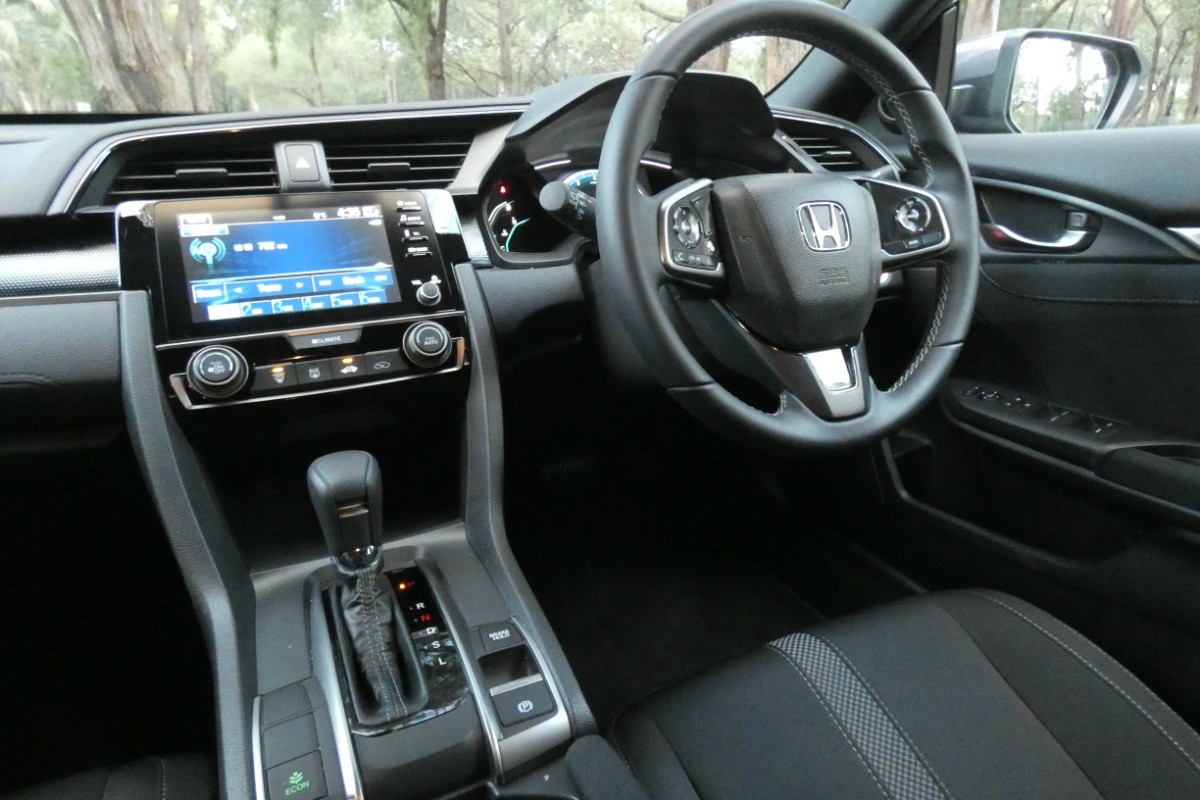 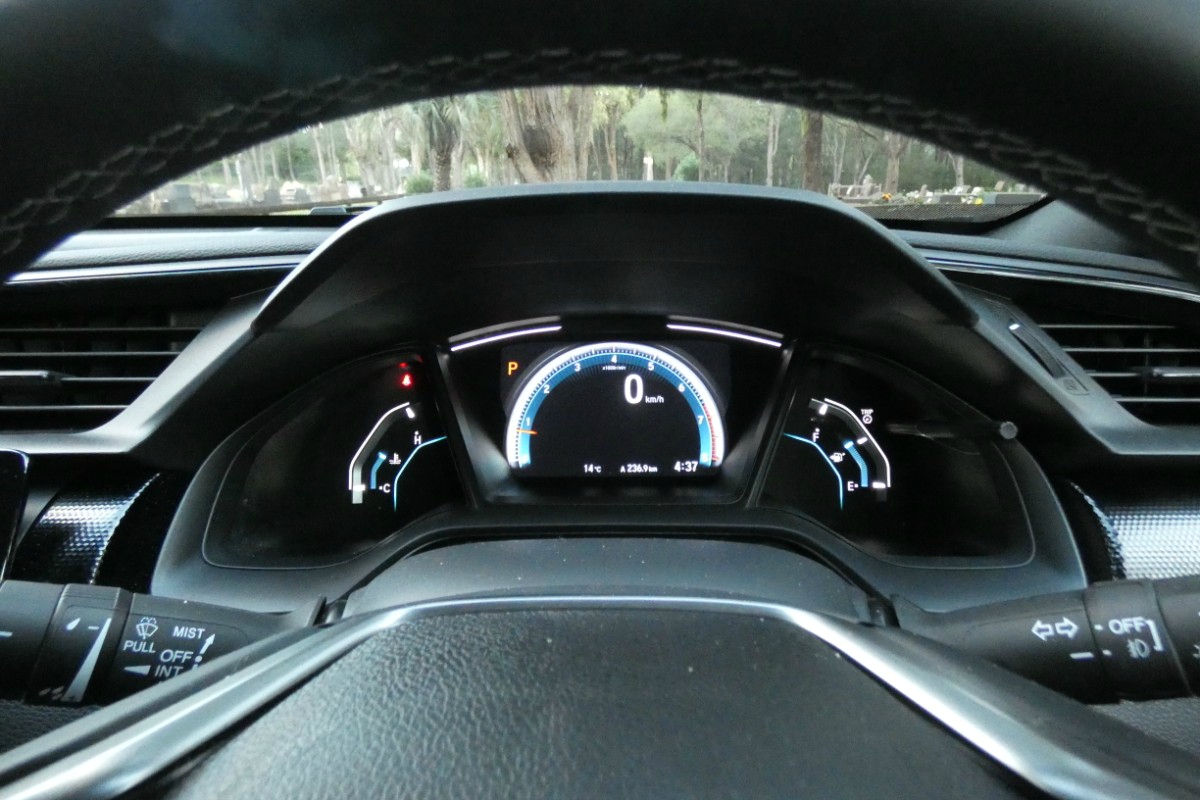 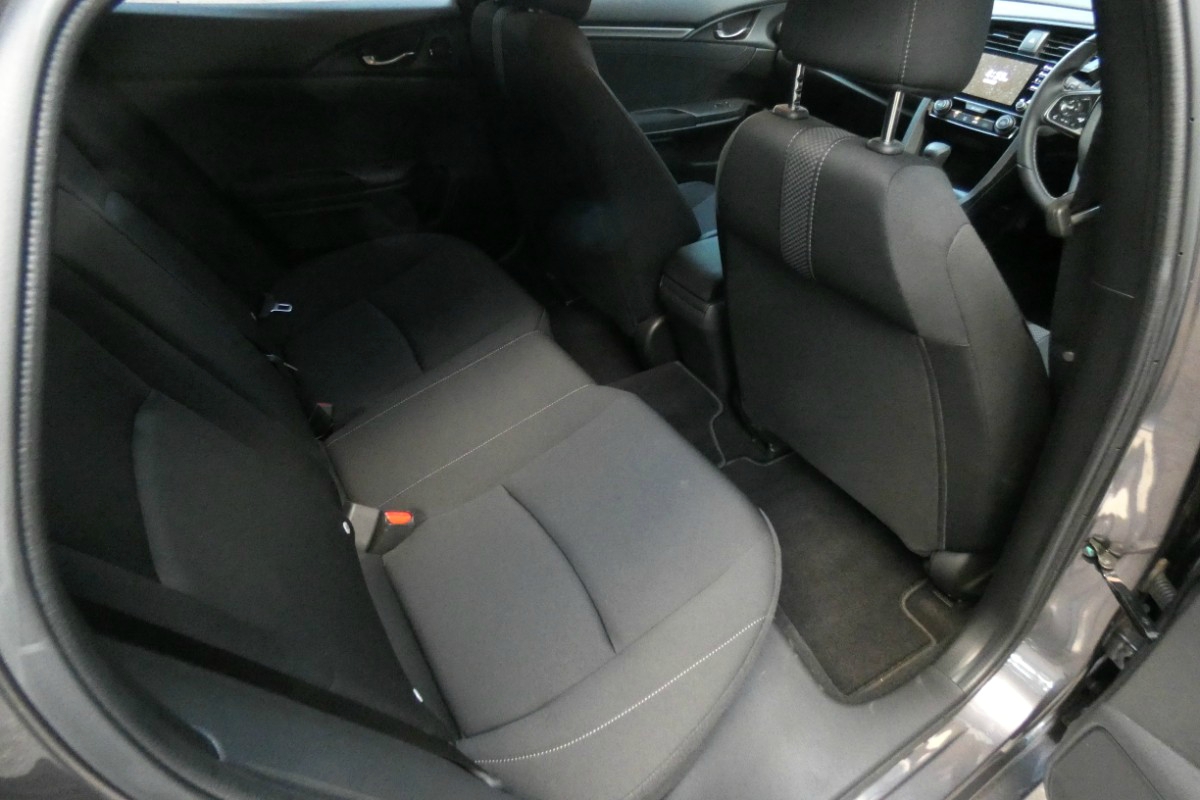 You get a fair old chunk of car for your money.

While this grade misses out on the latest advances in safety, it’s still gets five stars and is a very practical, easy to live with automobile.

Buy one before June 30 and you qualify for a 7-year unlimited distance warranty with roadside assistance thrown in — otherwise it reverts to the standard five years. 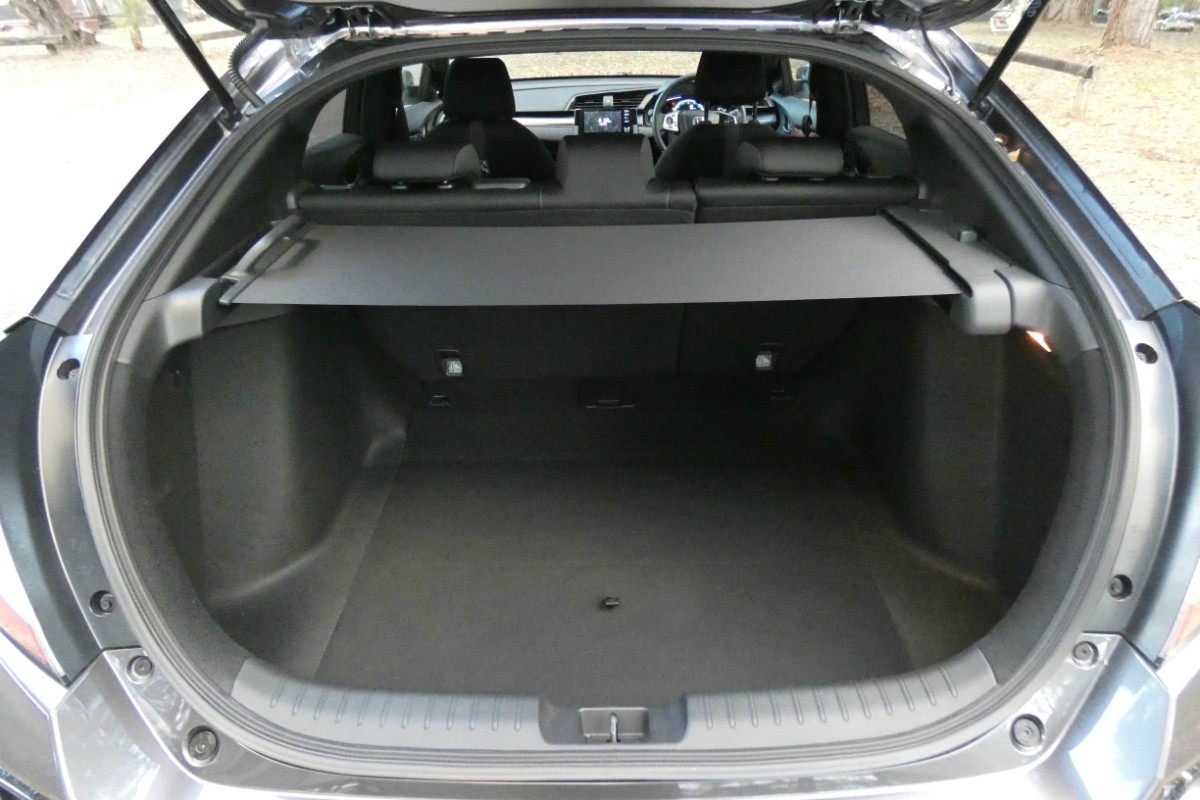