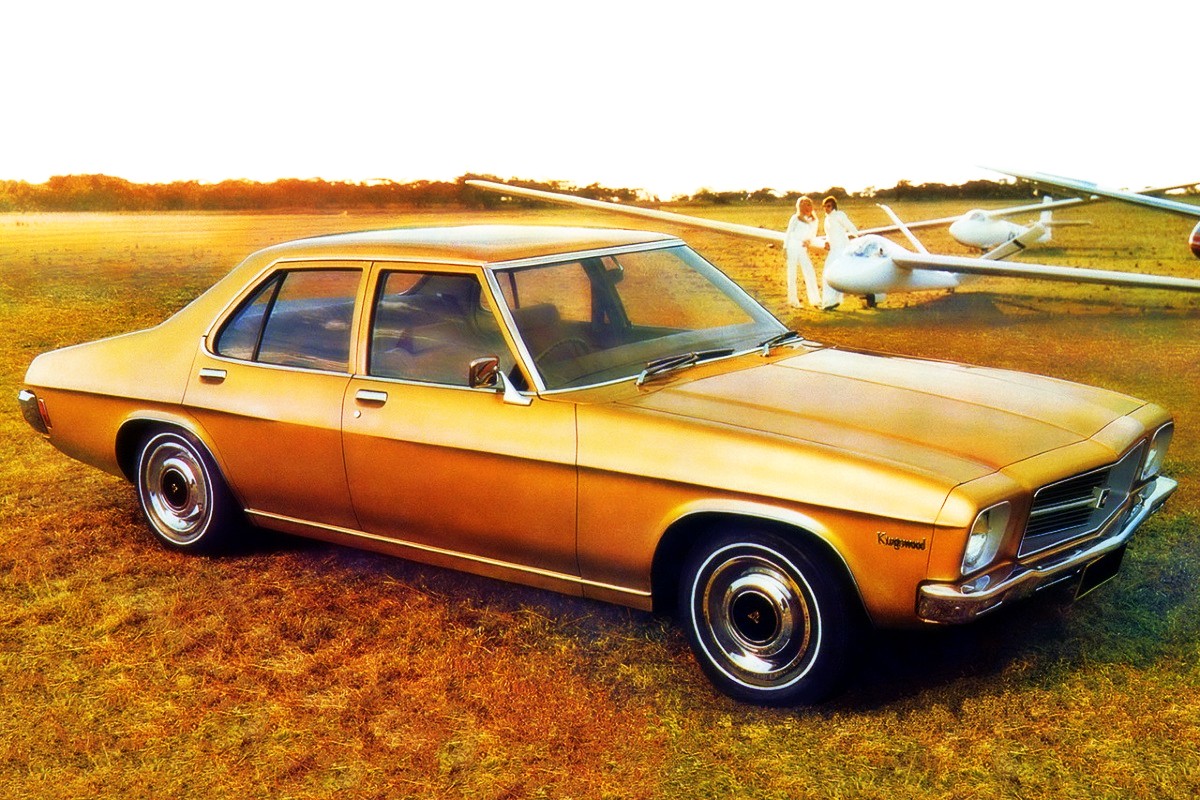 The HQ was a milestone for Holden.

Up until its release in July, 1971 all previous Holdens were essentially based on the original 48-215, especially in terms of the underlying engineering platform.

Its svelte shape clothed a new half perimeter frame chassis.

The suspension featured rear coils in place of the old fashioned leaf springs.

Flow through ventilation meant that front quarter windows were eliminated.

The under-dash handbrake was tossed out in favour of a floor mounted arrangement located beside the front seat.

Significant attention was paid to noise and vibration reduction.

The thin front “A” pillars set a visibility benchmark that has endured into the 21st century.

When it first appeared in dealerships many thought the HQ was smaller than the car it replaced.

The elegant styling masked a car which had grown longer and wider than its HK/HT/HG predecessors, and was 1 inch (25.4mm) longer than the XA Falcon — yet looked shorter.

Its styling set it apart from the VH Valiant, whose designers had embraced a “fuselage” look.

And when the XA Falcon arrived in March, 1972 Australia’s car buyers had the choice of three mainstream sedans — all aimed at the same market segment, all with the same 111 inch (2819mm) wheelbase and all looking very different.

It would be a moment in time.

Never again would the “Big Three” go head to head, model for model, in the Australian market.

The HQ Holden’s styling program began in January, 1968 just as the HK was released to the public.

He had started at GM’s Styling department in February, 1937, and by the time he was appointed Holden’s styling boss in 1964 was one of GM’s foremost car designers.

The day-to-day management of the design process was in the hands of John Schinella and his deputy, Philip Zmood.

Schinella had arrived at Holden in 1965, fresh from working in the team that was shaping the 1965 Mako Shark II concept car, the Chaparral race cars and the 1967 Camaro.

Only 26 years old he brought energy and a belief that styling and engineering had to work together to ensure great design outcomes.

Philip joined Holden in early 1965 at age 21, after graduating in industrial design from RMIT, specialising in automotive design — the first to do so in this field in Australia.

Leo Pruneau joined the team from Vauxhall in 1969 when John returned to the USA.

Peter Nankervis also became part of the HQ team in 1969, having managed the Torana studio while the LC model was being developed.

There were two initial proposals for the HQ.

One resembled the 1968 Pontiac Tempest/GTO while the other looked like a 1970/71 Buick Skylark sedan.

Neither proposal excited the team, so they searched further ahead into GM’s future line ups for fresh ideas.

From a series of sketches a full-sized clay model was developed during June, 1968.

The shape was smooth and sleek.

It was a significant departure from the “fill in all of the box” HK/HT/HG design.

The clay model featured very thin “A” pillars, a design idea that would come to define the HQ.

These thin, yet strong “A” pillars were Philip Zmood’s idea, conceived partly as a way to meet proposed government regulations that mandated the driver’s sight line, thickness and strength of “A” pillars on cars sold in Australia.

Despite the engineering challenges, Holden’s chief body engineer, the inventive Reg Hall, found a way to meet these regulations and Phil’s design.

The regulations, however, were never implemented as a result of lobbying from other companies.

Holden went ahead anyway and the unobstructed vision provided by the HQ’s pillars remains a benchmark.

As the development process moved forward the shape of the “C” pillars became slender and elegant, flowing down into the rear fenders and into the chrome bumper bar which was embedded in the body panels.

Various locations for the tail lights were evaluated until the team agreed on two rectangular lights on either side.

Concealed wipers, which were being progressively introduced on GM’s American vehicles, were initially considered, but never made it into production, mainly for cost reasons.

The wide and deep open mouth grille, which angled back and dropped below the headlight level, was a significant breakthrough from previous Holdens which featured bluff fender to fender rectangular shapes of die-cast metal and plastic, bookended by headlights.

The HQ’s headlights were encased by the front sheet metal and not really part of the grille at all.

Another new idea was the “trapped” bonnet.

This gave stylists the scope to shape the front end without having to worry too much about how to integrate the leading edge of the bonnet into the grille design. It also allowed for less costly facelifts.

Accentuating the freshness of the HQs design were the long “blisters” that ran across the wheel arches.

Part of Peter Nankervis’s job was to refine and finalise the details of the grille, badges and chrome mouldings — a crucial job as these small details must visually and easily define each model.

The design team nailed the HQ’s tyre to sheet metal proportions — to perfection.

From the rear, especially, the fenders cut under the body line to expose the tyres and give the car a purposeful stance, even on narrow cross-ply tyres.

The engineering of the HQ also broke with the past.

Its partial chassis and all coil suspension allowed product planners to use one basic platform to underpin the sedan, Monaro coupe, utility, panel van, one-tonner and the long-wheelbase wagon and Statesman.

Holden’s engineers gave the HQ an exceptionally rigid body and chassis and a durable suspension.

That so many still survive is evidence of the robustness of the car.

What the engineers could not deliver was the handling to match the styling.

It is automotive folklore that Holden’s chief engineer at the time, George Roberts, gave the HQ range its soft ride and understeer characteristics.

Prior to arriving in Australia, Roberts had spent a significant part of his career in GM ensuring that the occupants of Cadillacs and Buicks  were never troubled by such things as potholes or speed humps.

He infused the HQ with that same philosophy.

Despite the softish handling, the HQ was an outstanding success for Holden.

The basic body shape endured until 1984 when the last WB Statesman rolled off the production line.