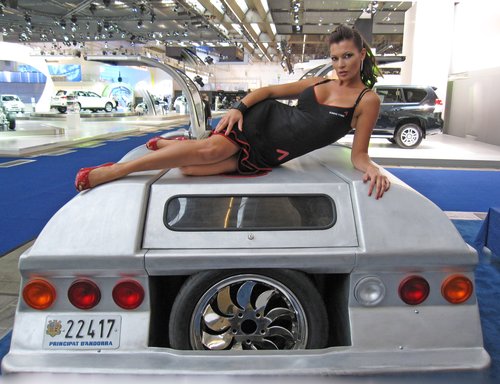 You find the strangest things at motor shows

YOU find the strangest things lurking in the corners at motor shows.

Like the bloke from Andorra who decided to build his own car and paid for the four-metre square exhibition space to show it at the Frankfurt show.

Frankfurt just quietly is one of the largest motor shows in the world and is spread over an enormous exhibition space — just ask my feet.

At least that’s my understanding because he didn’t speak much English and I don’t speak any German.

Where is Andorra? I discovered it’s a small landlocked country located in the eastern Pyrenees mountains, bordered by Spain and France.

It’s only 468 square kilometres in size and is the sixth smallest country in Europe, notable for tourism and as a tax haven.

The official language we learned is Catalan, although Spanish, French, and Portuguese are also commonly spoken.

The car is a Hartung Sparta Nature and the bloke in question is Helmet Hartung, 61 (he was at the time), a medical professional turned car builder who with a few mates decided to build his first car back in 1973.

The Sparta runs a GM 6.6-litre diesel V8 with three – count them that’s three – turbochargers and puts out an incredible 1014kW of power and 2000Nm of torque.

It’s described as ‘‘possibly the most powerful car in the world’’.

Weighing in at 1400kg the exhibition model is finished in hand-beaten, 5mm aluminium.

Helmet describes the car as an off-road sports car, kind of a Hummer before anyone thought of the Hummer.

Customers can also opt for a 3mm titanium or carbon-zylon composite body, both of which are lighter but more expensive.

The Sparta runs on a combination of vegetable oil and diesel, with three fuel bladders distributed across the front of the car.

The two outboard bladders contain vegetable oil because it will not explode in the event of a side impact.

The two mix before entering the combustion chamber.

The Sparta seats three passengers, with the driver occupying the centre position.

The car on show was not a ‘‘runner’’ we discovered, finished just a few days before the show and brought in on the back of a trailer.

Hartung is in the process of sourcing a transmission that can cope with all that torque, a unit he says will be a five-speed dual clutch auto (although first gear won’t get much use).

Initially, he wanted to build his own transmission but explained that it was a much more expensive proposition than he bargained for.

The car rides on 18-inch wheels shod with 255/45 rubber with two spare wheels and has pneumatic suspension for off-road driving that can raise the car from 170mm to 300mm which gives it plenty of ground clearance.

Hartung describes the Sparta’s ride as much like that of a classic Citroen DS.

An economy switch located in the centre console cuts the power output to 120kW and reduces fuel consumption to less than 5.0 litres/100km, provided the car is driven steadily.

It’s not the first time Hartung has shown a car and while he hadn’t sold any yet, at least not when we spoke to him — he remains positive with plenty of interest from what he describes as serious buyers — not the yuppies he expected.

We never did find out whether Hartung got his homemade car to market.