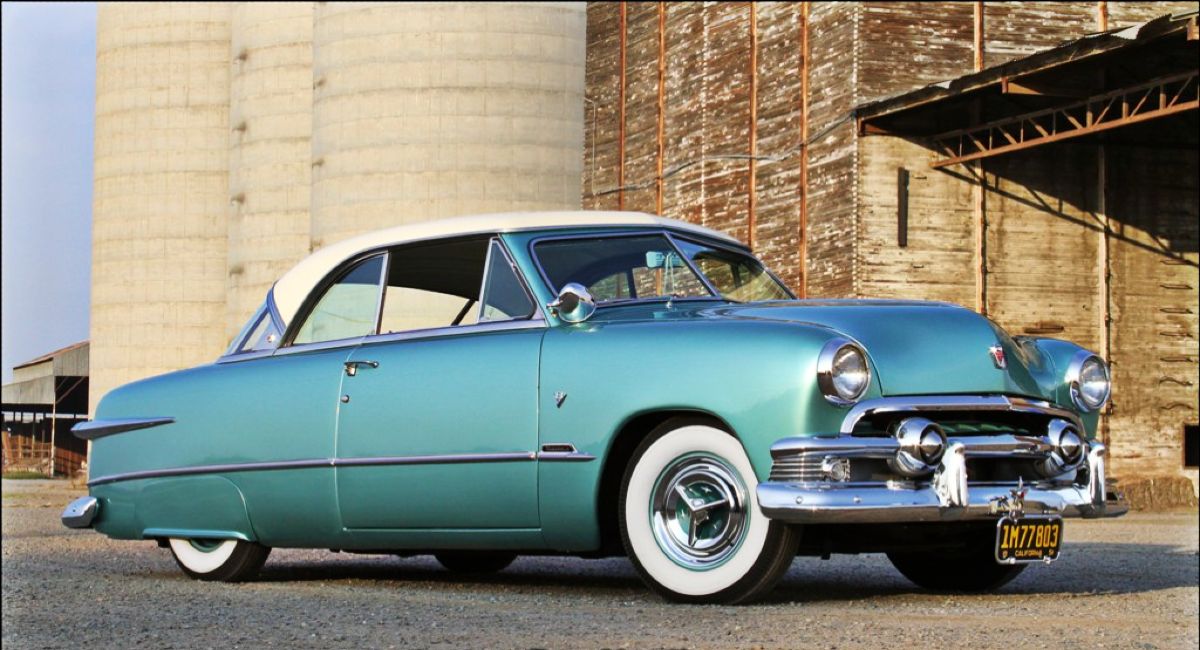 The 1951 Ford Victoria hardtop is one of my all-time, most admired cars.

It ticks all the boxes for me.

First, it’s is a pillarless hardtop.

Hardtops are my favourite body type.

The lack of a centre pillar above the waistline gives the stylists so much more opportunity to create a sporty shape, even from a four-door sedan — and delivers a unobstructed panoramic view.

And the Victoria is a V8.

Okay, it’s the flathead V8, not an OHV, but it has that unmistakable low rumbling Ford exhaust note which has never been replicated.

Automotive legend has it that pillarless hardtops were “invented” by General Motors.

Custom car builders had been offering expensive bespoke hardtops since the early 1920s.

From around 1913 a popular after-market option for mass produced vehicles was a “California” top.

It was a rigid roof that could be bolted to most of the open bodied, soft top cars of the era.

It gave a pillarless appearance.

With the growing popularity of fully closed sedans with during the 1920s, the California top became redundant.

The, in 1946, Chrysler returned to the idea and built seven two-door “Town and Country” hardtops — but took the idea no further.

Then came 1949 and GM unveiled its Buick Riviera two-door hardtop, followed quickly by similar models from Cadillac and Oldsmobile.

One year later Chevrolet and Pontiac offered hardtops at affordable prices and sold as many as they could make.

Every other car maker was caught off guard and had to play catch up.

The 1951 Victoria was Ford’s first hardtop.

It was styled in a very short time by Gordon Buehrig.

Yep, that Gordon Buehrig, renowned designer of the ground breaking 810/812 Cord and iconic Auburns and Duesenbergs of the 1930s.

Buehrig was in charge of the Body studio which developed the styling of station wagons and convertibles from Ford’s basic sedan, once the sedan’s basics had been approved.

In a 1989 interview at the Benson Ford Research Centre, at the Henry Ford museum, Buehrig shared memories of styling the hardtop.

“General Motors were building a car called a hardtop,” he said.

“They were very popular.

“The sales department was very unhappy that Ford didn’t have a model like that because General Motors were making lots of money on it.

“The dealers were really screaming.

“So, John Oswald (then head of Ford’s body engineering and styling department) came in one day and said, ‘Can you take a convertible and make it into a hardtop?’

“Well, of course, we already had the windows for the door and the quarter window (for the convertible), so it was just a matter of doing the new top for it.

“We did it with a band corrugated of metal up over the rear window which gave it a styling distinction.”

And right there you have the genesis of the “crown of chrome” design motif which was still being used by Ford 50 years later.

The Victoria hardtop, with its standard V8 went to 110,000 buyers, beating Chevrolet’s Bel Air Sports hardtop by 7000 units — which only had a six-cylinder engine.

It was the first time Ford had outsold Chevrolet in many years.

You may not be able to afford a Buehrig designed Cord, Auburn or Duesenberg, but if you can get your hands on a 1951 Ford Victoria hardtop, you will have a Buehrig styled classic.

That’s one more reason why I think the car is so special.