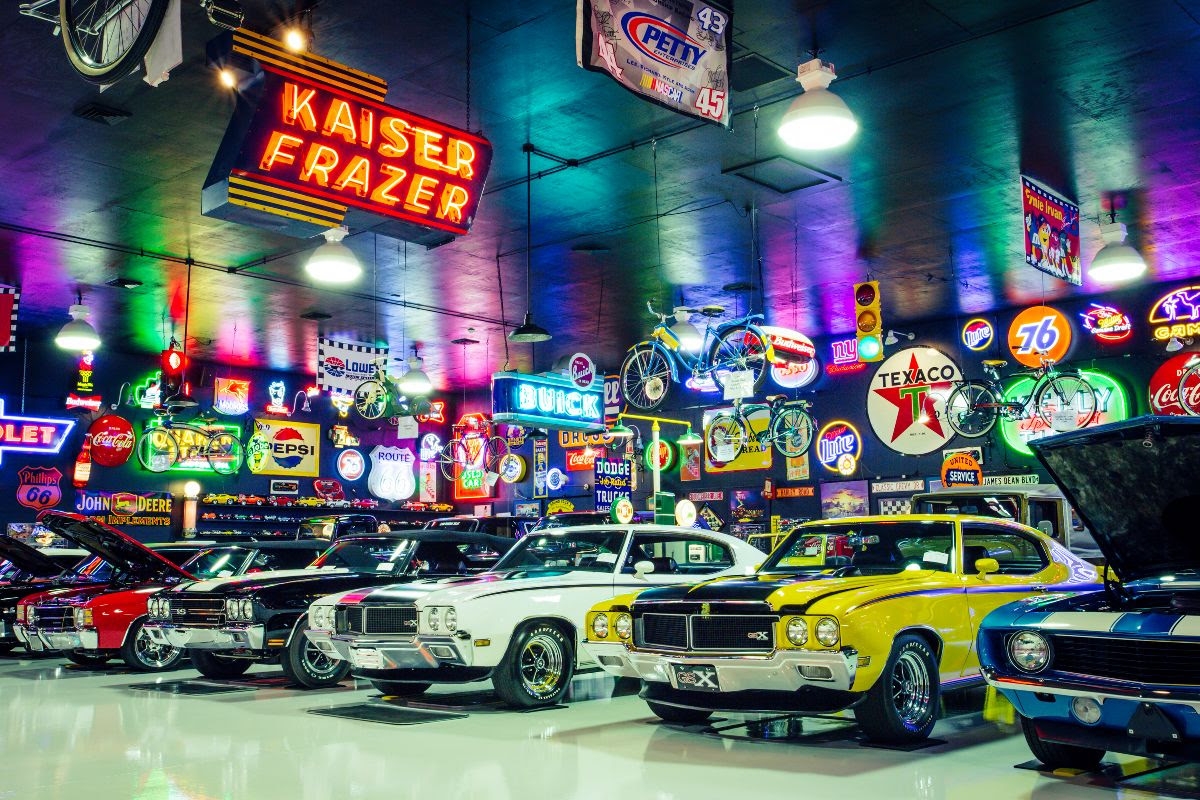 A massive collection of motoring Americana goes under the hammer later this month.

Some 80 cars, six motorcycles and 5000 pieces of road art from collector Eddie Vannoy will cross the auction block on June 26, most of the items with no reserve.

The construction millionaire became interested in cars at a young age and over the last 50 years, has amassed a giant assortment of cars, motorcycles, and memorabilia.

For more than 30 years, Vannoy strategically hand-selected high-quality cars, road art and relics to build this extraordinary collection, and it’s taken on a life of its own.

There’s also a 4-speed 1970 Plymouth Superbird with just 21,838 original miles and a 1969 Dodge Daytona in a bold red over black with contrasting white wing.

Another attractive muscle car pairing from Vannoy’s collection is a set of 1970 Buick GSXs — one 4-speed in yellow with a black interior and the other wearing Apollo White and boasting factory air conditioning.

For fans of American sports cars, Vannoy’s collection further includes a handful of Corvettes, including a pair of the desirable 1967s.

One is a tri-power 427/400 HP V-8-equipped 4-speed with factory air conditioning and dressed in classic Ermine White with a black stinger and black interior, and the other is a highly customised Resto Mod built by American Speed Shop and featuring a 525 HP LS3 V-8 engine and Tremec 5-speed manual transmission nestled in a specially fabricated tube steel chassis.

The massive selection of memorabilia from Vannoy’s museum includes approximately 5,000 items of Road Art that were used strategically throughout the space to recreate eras gone by.

From soda pop signs, ‘50s diner goods and an entire arcade worth of pinball machines and more, to gas pump islands, pedal cars, bicycles and both neon and porcelain signs, the collection takes viewers right back into the heart of mid-century America with its overwhelming nostalgic appeal — and all of it is up for grabs.

To bid you need to register, and bidding can be in person, online or on the phone.

Bidder registration is available online in advance for $150, or $200 after June 25, and includes admission for two to each auction day.

Doors open at 8am with the vehicle auction beginning daily at 10am.

To view the list or to register as a bidder for this and all Mecum auctions, visit www.Mecum.com, or call (262) 275-5050 for more information.