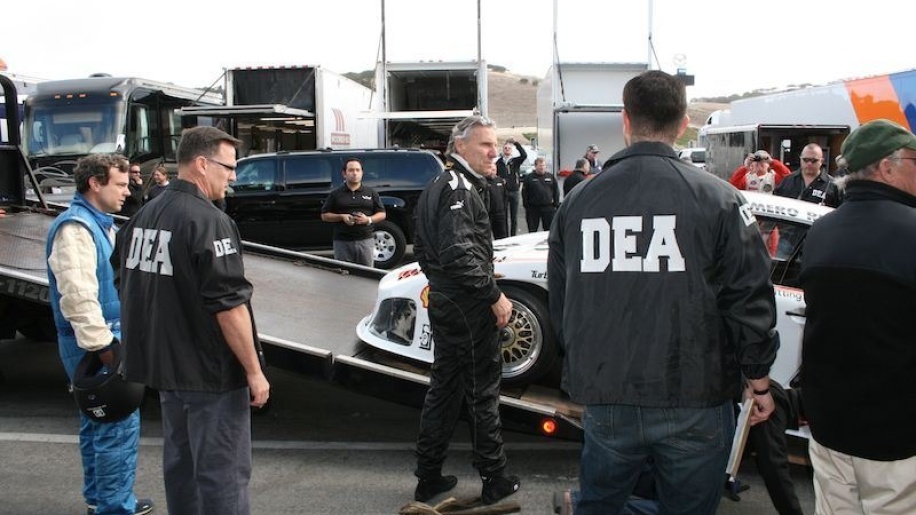 IT happened a few years ago, but it was a day US racing driver Bruce Meyer will never forget.

The popular driver has a world-class car collection, with exotics including the first production Shelby Cobra, the ex-Clark Gable Mercedes-Benz 300 SC Cabriolet, a Ferrari 625 TRC Spider, one of the Briggs Cunnningham Corvettes entered at Le Mans in 1960 and many more.

He’s a member of the 200mph club at Bonneville, he’s involved in numerous charitable organisations and he’s just one of those terrific guys, always with a ready smile for anyone.

But he got the shock of his life when Drug Enforcement Agents (DEA) arrived at Laguna Seca one race day and seized his 1979 Le Mans 24-Hours winning Porsche 935 K3.

First, a bit of  history.

Meyer’s Porsche 935 K3 (chassis 009 00015) was entered at Le Mans by Don and Bill Whittington, who, with German co-driver Klaus Ludwig, drove the 700hp  twin-turbo Porker to victory at the world’s most important endurance race.

The car also ran second at Brands Hatch in the same year, and in 1980 it finished third at Sebring, first at the Nürburgring, and first at Watkins Glen.

After spending 30 years in storage, it was restored by Canepa Motorsports.

It then won the Porsche 911 Competition classes at the 2013 Pebble Beach and Amelia Island Concours.

As the only 911-based Porsche to win overall at Le Mans, it’s also widely viewed as the most important 911 of all.

The Whittington brothers, however, had a chequered history that included a probe by the DEA, FBI and Homeland Security in which the brothers were suspected of providing aircraft to South American drug traffickers.

Fast forward to a January track day at Laguna Seca in Monterey, California.

All of a sudden a group of DEA agents arrived to seize Meyer’s Porsche.

Meyer told his version of events to Sports Car Digest:

“The DEA agents approached and asked if I was Bruce Meyer. They arrived with a black Chevrolet Suburban with US Government license plates, a black Dodge Charger and a black car hauler.

“The three agents were armed, badged and quite serious. At first I thought is was a joke, but it got more intense with each passing minute.

“With all that had been publicised about the Whittingtons and the Government seizing and confiscating their assets, I was convinced the DEA was rounding up anything and everything with a nexus to the Brothers Whittington.

“It also occurred to me that, although the chain of ownership and paperwork clearly shows me as the rightful owner, it could take forever to get the car back.

“The DEA agents loaded up the car with the help of several race team crews, gave me a receipt for confiscated property and left the paddock. It was very upsetting.”

Was this priceless piece of Porsche history ever going to be seen again in public?

It all didn’t seem real. It seemed like something out of the movies.

And that’s because it sort of was.

After what Meyer said was “an eternity”, the DEA car hauler brought the Le Mans-winning Porsche 935 K3 back to Laguna Seca.

Thankfully for him and for his Porsche, the whole DEA ‘takedown’ was an elaborate hoax, the work of Bruce’s good friends, Bruce Canepa, Charlie Nearburg, Chip Connor and Al Arciero.

The DEA ‘agents’ were actors flown in from Hollywood.

The epic prank took months to put together, and Bruce Canepa, the mastermind of the big sting, said that so much work went into it that it felt like a full-time job over the last few weeks leading up to the big day.

There was even a rehearsal the day before, all to make sure that it was as realistic as possible.

All the agents/actors were ex-military, which made their handing over a Federal Seizure Order, signed by a Federal Judge, perfectly legitimate.

Once the paperwork was handed over, the DEA agents started taking steps to haul the car away, enlisting Canepa’s crew to help them get the 935 K3 on the flatbed.

Meyer’s customary big smile was nowhere to be found. He could only standby and watch his beloved car leave the paddock and out on to the road, getting smaller by the second in the distance.

Little did he know that the flatbed drove over the hill, with instructions to park down below for 15 minutes.

The car was returned soon after and that’s when Canepa and the gang let Meyer know it was all just a big, elaborate joke.

“We one-upped the one guy that cannot be one-upped,” Canepa said.

Meyer summed up the caper best, calling it, “the most amazing Hollywood-style prank ever!”

“With best pals like mine, one does not need enemies!”