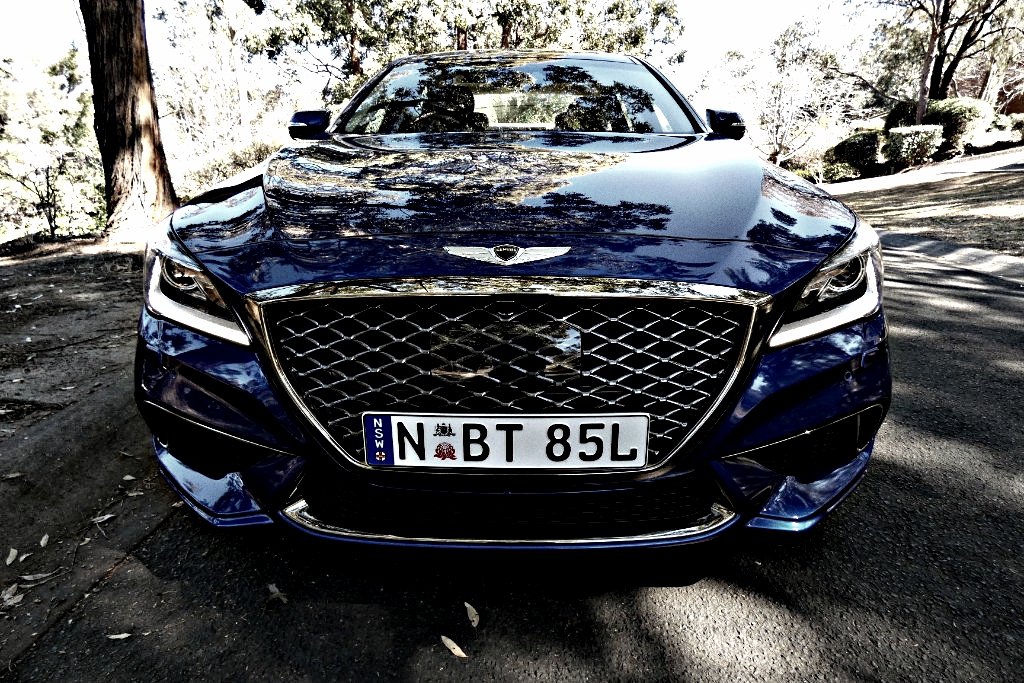 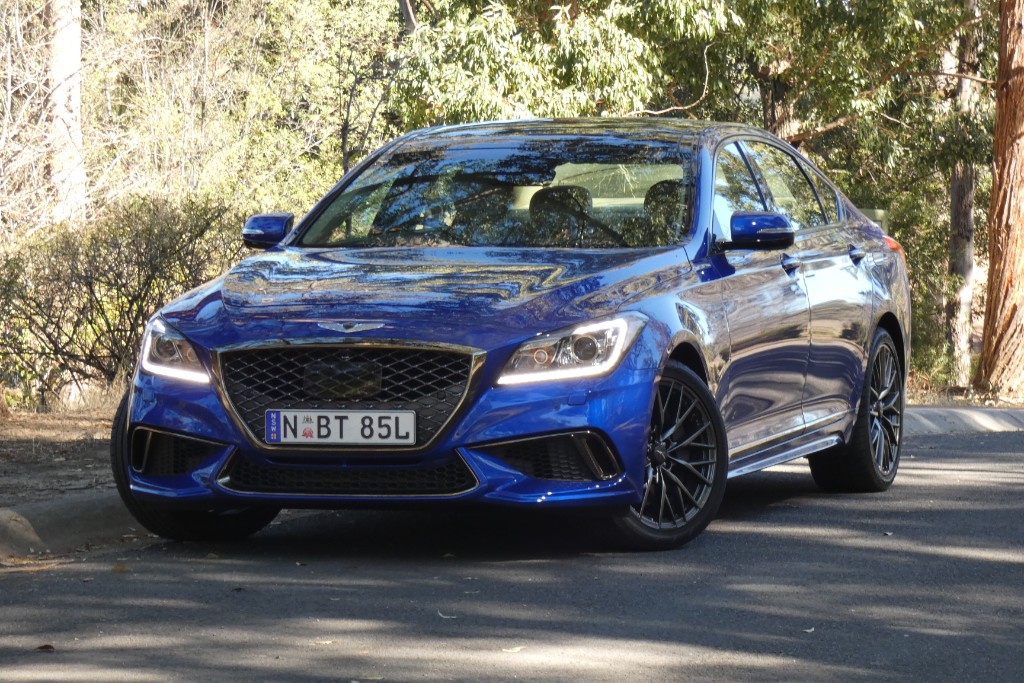 We drove the first Genesis just after launch back in early 2015.

Back then, it wore a Hyundai badge as well as the Genesis wings. It was kind of a bet each way.

It was confusing and in hindsight probably a mistake, but Hyundai obviously saw the error of its ways because now Genesis has become a brand in its own right.

This time around there’s two very different looks, with different front grilles, like Mercedes-Benz offers with C-Class — one slatted, chrome and conservative, the other mesh, black and sporty.

And, of course, it’s been renamed the Genesis G80, a name that rolls off the tongue with alliteration — but the basic design and mechanicals remain the the same.

With the imminent departure of Nissan’s Infiniti, Genesis will have its sights set on Toyota’s luxury brand Lexus and, as Hyundai has already proved — it should not in any way be underestimated. 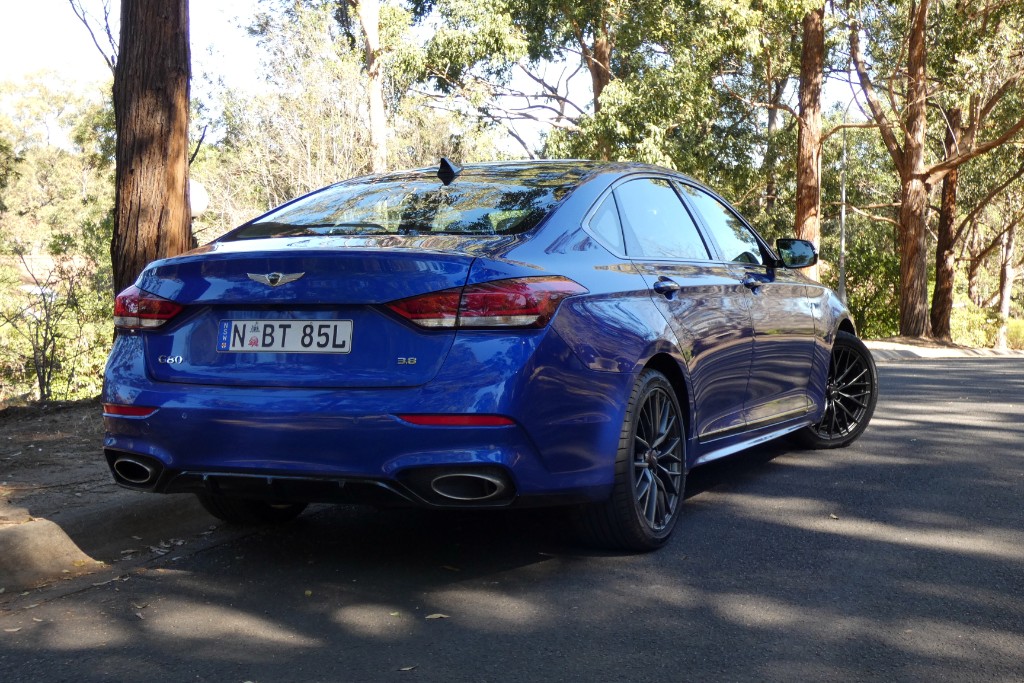 Along with the four grades, there’s a choice of nine exterior colours and three interior trim options.

Standard features include leather and real aluminium trim, dual zone climate control with rear controls, 12-way driver and front passenger seats with a 4-way lumbar support function, heating and cooling for front seats too, with slide back easy entry, a power adjust steering wheel — but no heating for the wheel.

The dash is dominated by a large 9.2-inch touchscreen with satellite navigation and a 900 watt, 17-speaker Lexicon by Harman premium audio that includes a DVD player and 27GB hard drive.

It’s pretty much got the lot. 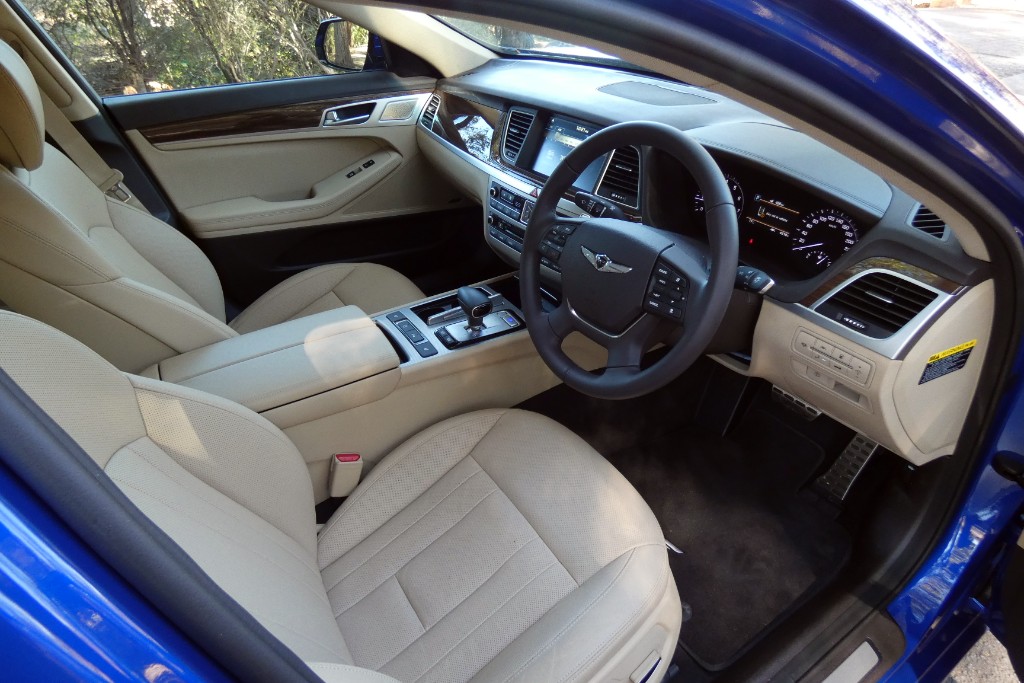 In fact, it’s larger than the gone but not forgotten Commodore and has a wheelbase that is a whole 1mm longer than a Caprice.

It’s the same engine that powered the original we drove and is paired with a 8-speed automatic (also the same), with fuel consumption rated at 10.4L/100km.

That said the car is offered with other powertrains overseas, including the 2.0-litre and twin turbo V6 from cousin the Stinger.

Select Drive, punch the accelerator and the G80 takes off the way cars used to surge away from the line when six cylinder engines were the norm.

Adaptive electronic suspension is as standard and like other models has been tuned for Australian roads, with 19 inch wheels and larger rear tyres than those at the front — 275/35 and 245/40 Dunlops.

The ride is however quite soft and calibrated for comfort, rather than fast corners, but that’s in line with the car’s luxury bent.

The driver has the option of changing gears manually, using steering wheel mounted paddles, which in this car are fitted with rubber pads on the back so your fingers don’t slip.

Says something about the level of attention to detail.

There’s just foward and reverse settings, the drive selector does not include a Park setting — instead there’s a separate park button that automatically engages the electric parking brake.

The car’s speed can be displayed digitally between traditional analogue dials, but the instrument cluster as such is not configurable like some.

We’d also expect to see Heads-Up display in a car of this calibre, but it is restricted to the top of the line Ultimate model.

The Lexicon audio system is excellent, but showing its age, with a disc player and the absence of a digital tuner.

The car takes standard 91 unleaded and we were getting 10.4L/100km after more than 300km which is bang on the manufacturer’s claim.

When it comes to luxury cars, it’s not just about the car itself — but the perks that come with it.

In the case of Genesis, these include free scheduled servicing for five years, along with a five-year, unlimited kilometre warranty, five-year roadside assistance and the Genesis To You valet service that provides access to a free  pick up and drop off service, along with the use of a loan car when the car needs to be serviced. 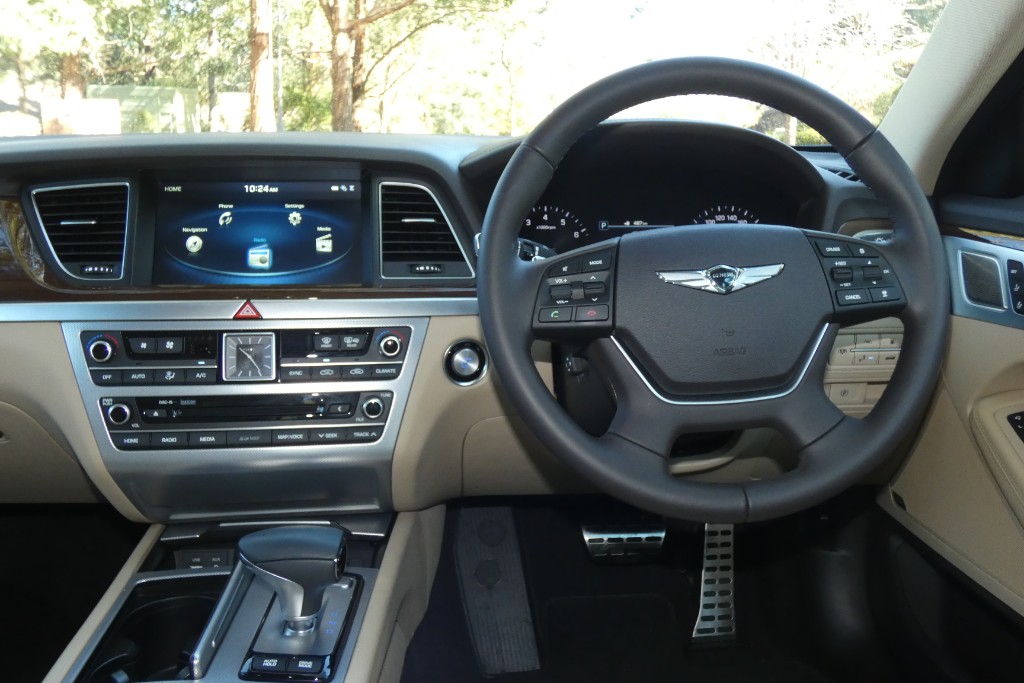 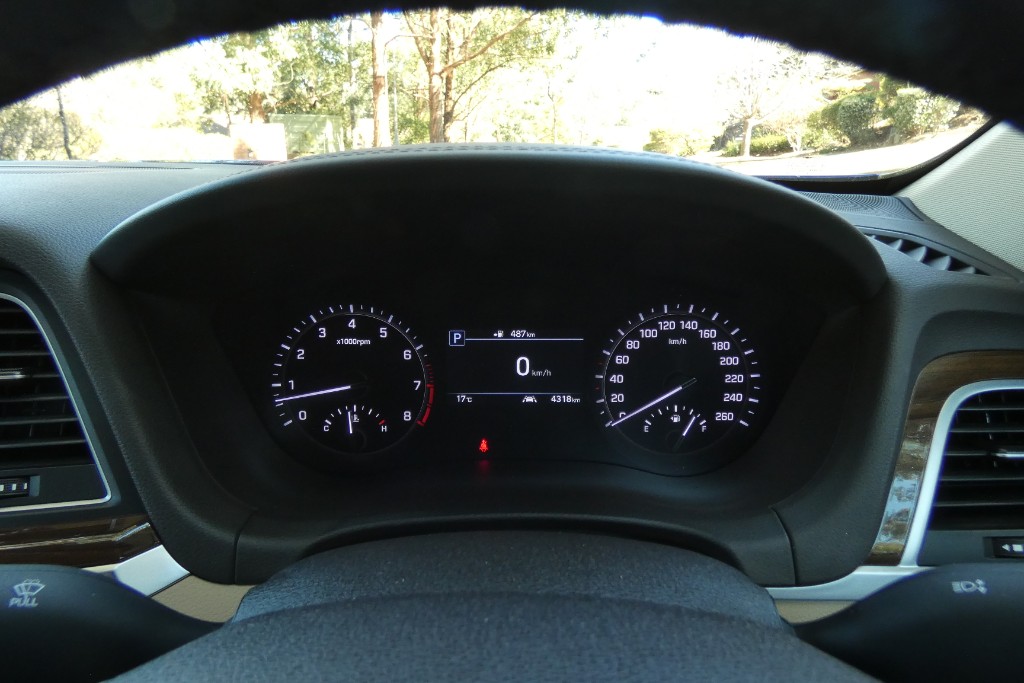 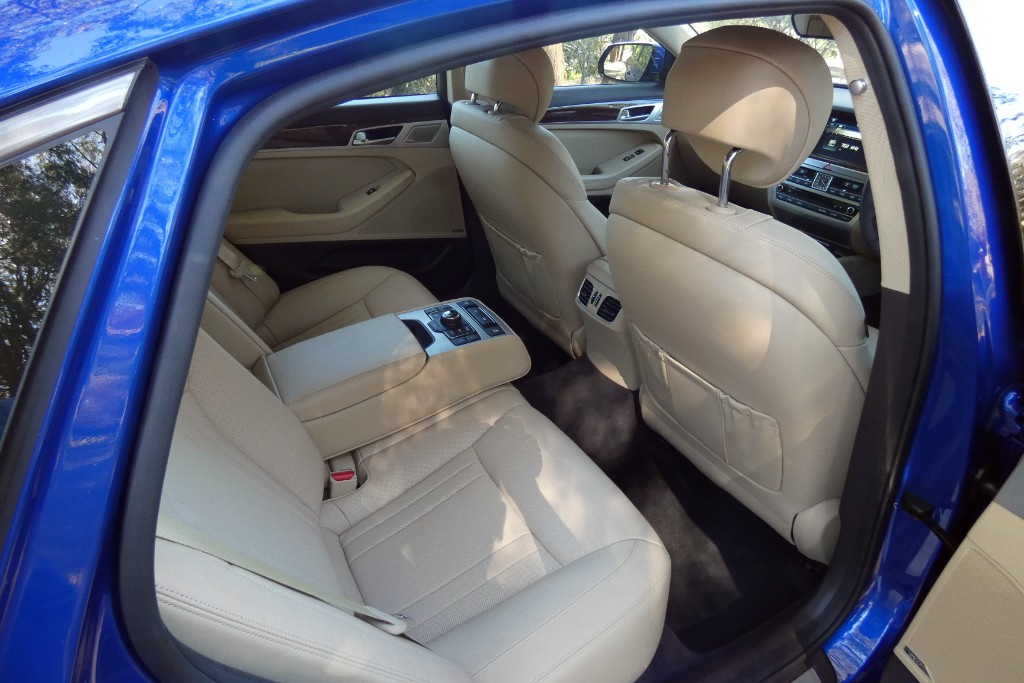 With a Genesis badge at both ends, It looks a lot better, especially with the cool Sport Design package.

The G80 may be luxury on a budget, but it sure doesn’t feel that way from the driver’s seat and you can bet the new one when it arrives will be even better.

With Nissan about to pull the plug on Infiniti, the job now falls to Genesis to take the fight up to Toyota’s luxury brand Lexus.

It’s a big job but Hyundai has proved it has what it takes and should not be taken lightly. 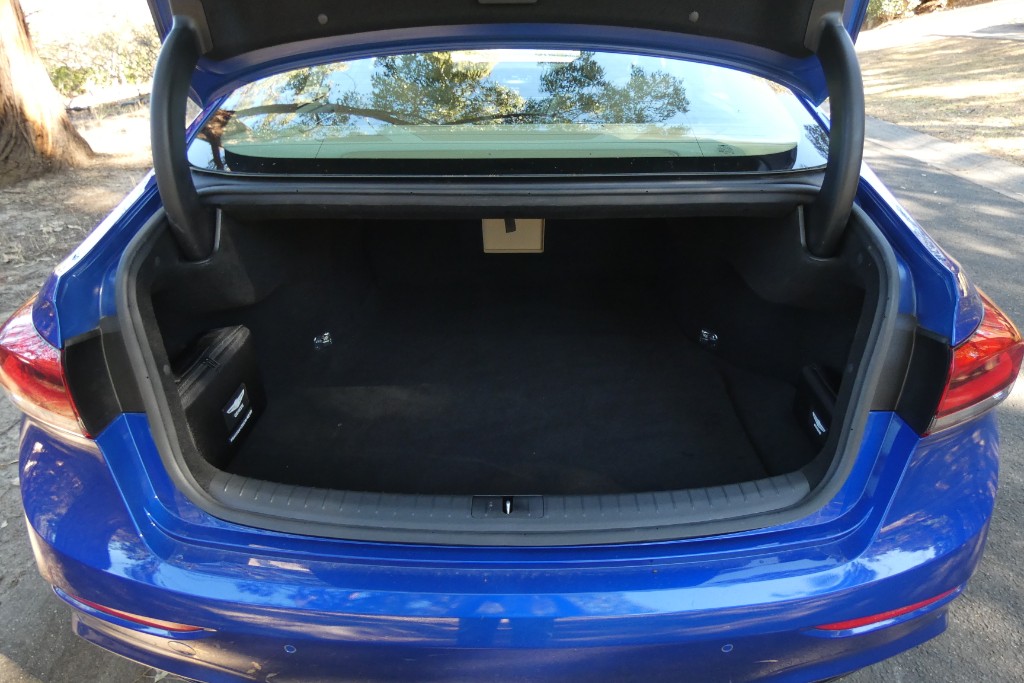