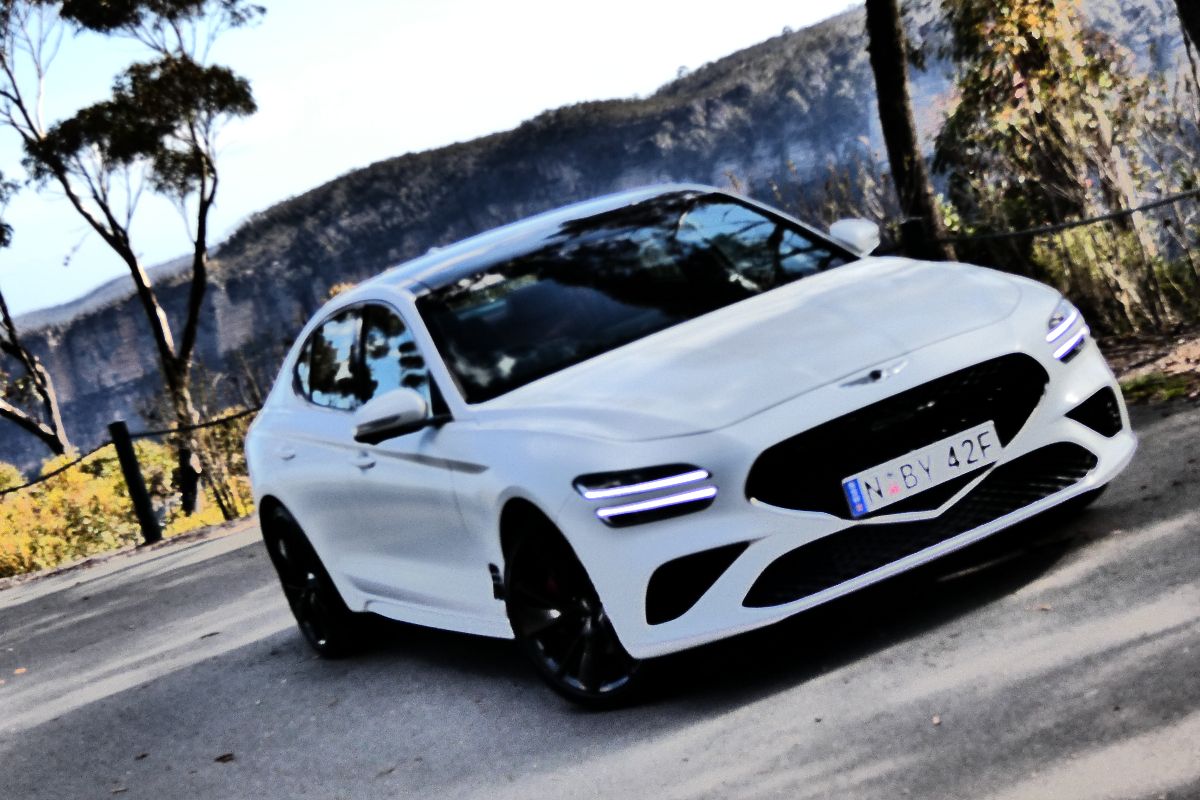 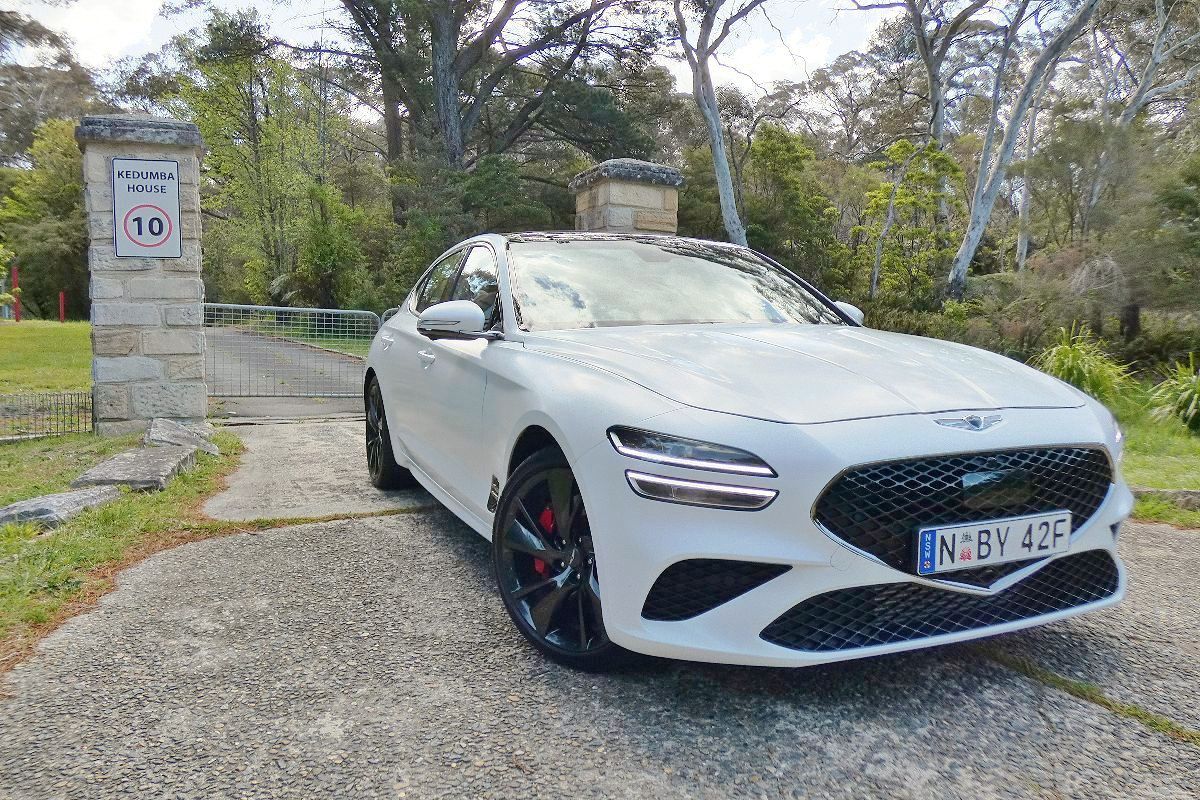 Any discussion of the Genesis G70 invites comparisons with its cousin the Kia Stinger.

While it’s true the two cars sit on the same platform and share engines and transmissions, the fact is they couldn’t be more different.

While the Stinger is a big, cruisy liftback GT, designed to power along the highway and byways, G70 is a smaller, more agile, rear-drive four-door sports sedan with a boot.

Stinger has plenty of room for friends in the back, while you could even describe the G70 as a 2+2 — because rear legroom is quite limited (especially with a tall driver). 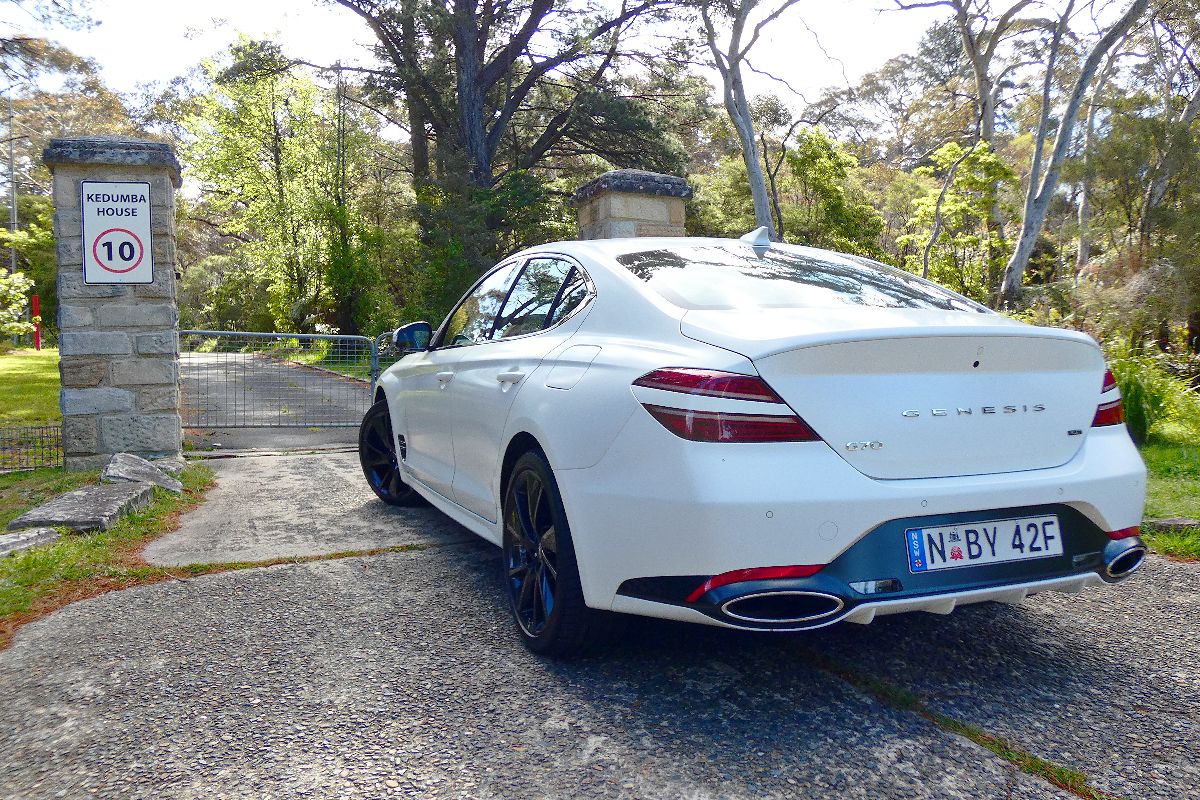 Prices for G70 get going around the same mark that top of the line Stinger leaves off.

We drove this car a couple of years ago, but that was the 2.0-litre turbo. It’s taken us a while to catch up with the V6 with all the bells and whistles.

Since then it has been the subject of a facelift, which includes a new front bumper, grille and headlights, along with a new rear bumper and tail lights.

Most notable are the striking signature quad headlights, featuring super thin LEDs, that bring the design into line with the rest of the lineup.

Below each headlight, air curtain inlets provide definition and well as helping to reduce aerodynamic drag.

A parabolic line adds an elegant touch to the design.

Signature quad tail lights can be found at the rear, with prominent Genesis lettering across the boot with its lip spoiler.

Dual exhaust tips and a body-coloured diffuser add the finishing touches to the updates.

While the first edition of this car looked and felt like a BMW, the latest iteration of the G70 with its droopy, rounder lines is more suggestive of a Benz — especially the rear.

There’s nothing wrong with is. It’s just a reflection of the way designers absorb what is going on around them and the influences that are brought to bear.

In terms of storage, there a lidded box between the seats, two console cupholders, a sunglasses saver overhead and bins in the doors.

There’s two power only USB ports in the storage box and a multimedia connection at the front of the console, along with a 12-volt outlet.

If you want the whiz-bang Lexicon system, you’re looking at $10,000 for the Luxury option package because it’s part of that.

Clari-Fi signal enhancement technology restores the true sound of all-types of compressed audio files, identifying and rebuilding lost detail in real time so you hear music that is more faithful to the original recording.

A ‘custom’ button on the steering wheel can be mapped to numerous functions, while the ability to make multiple Bluetooth connections allows easy switching between media sources.

The already strong five-star safety story has been beefed up with the addition of rear side airbags and a segment-first front centre side airbag, bringing the grand total to 10.

Auto high beam and adaptive cruise control are also part of the deal. 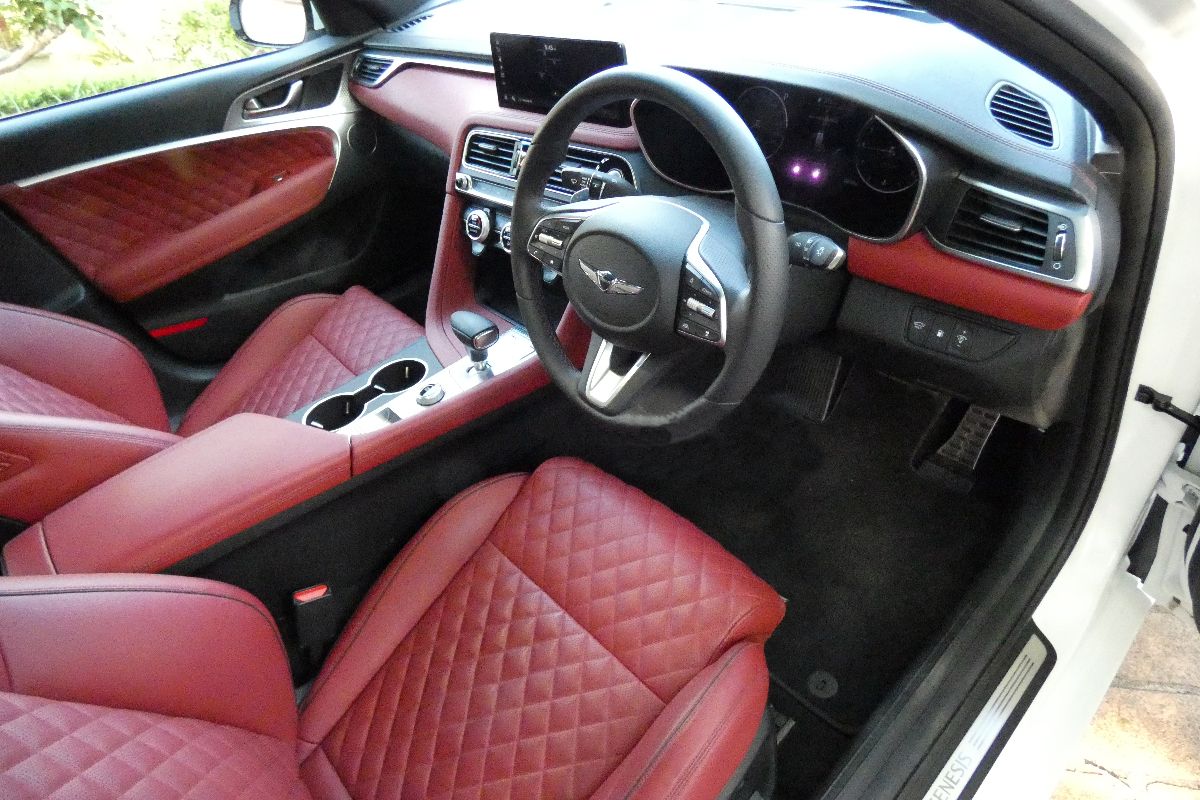 But competitors are many and varied, including the Audi A4, Jaguar XE, Lexus IS and of course — Mercedes C-Class.

3.3T is powered by a revised, twin-turbocharged 3.3-litre petrol V6 that pumps out 274kW of power and 510Nm of torque — which is bang on the money.

The latest model picks up a couple more kilowatts thanks to a new dual-mode, variable exhaust system.

The engine is paired with a traditional eight-speed auto that includes steering wheel mounted gear change paddles and auto rev-matching on downshifts — with drive to the rear wheels.

Stopping power is provided by Brembo brakes front and back, with four-piston calipers up front.

Suspension is Mac strut front and five-links at the rear, with auto, adaptive suspension for this model.

As you slide into the driver’s seat for the first time the ambience is palpable.

This car promises something special with its quilted red leather, stainless steel, or is it brushed aluminum trim, and the throaty rumble of the V6 as it springs to life.

Nosing on to the motorway for the first time, we punch the accelerator and the G70 fires forward — loud, urgent and convincing.

We’ve driven plenty of high performance sedans before — both on and off the track — and they all tend to have a certain feel.

The Genesis G70 is one of them.

It also brings the side bolsters of the driver’s seat to life, which move inwards to hold you tighter — unnerving but probably customisable.

Because G70 is a rear drive car, switching to Sport+ means the back has the potential to ‘step out’ and could leave less experienced drivers looking embarrassed (and possibly out of pocket).

Even expert drivers can sometimes forget what car they are driving and whether traction control is on or off as a certain PR once discovered.

This scenario is highly likely to happen in the wet.

Based on vehicle sensors, such as G-force, steering angle, steering velocity and throttle position, as well as the drive mode, it provides the optimal damping force for each wheel.

The system can intelligently adjust compression and rebound forces up to 100 times per second using continuously variable dampers.

Once you’re up and running, overtaking can be performed at will with a touch of the accelerator.

Annoying tailgaters can be left gaping as the car shoots ahead.

Be prepared to be scoped out too, especially by drivers of German cars who can’t quite make out what it is.

The fact they’re looking, means Genesis is pushing all the right buttons.

There’s also launch mode, designed to optimise acceleration from zero to whatever.

But after you’ve had a play with this a couple of times, you’ll probably only return to impress friends.

Although 3.3T is three tenths of a second slower than the benchmark Beemer, it’s a meaningless figure really because it will never be put to the test.

What is guaranteed, however, is that this car will put a smile on your dial.

The ride from the adaptive dampers is exemplary, the steering is direct and responsive depending on mode and the car corners exceptionally well, sitting flat and controlled.

Although the changes delivered by he eight-speed auto are not as crisp as a twin clutch, we prefer the smoothness of a traditional auto.

We were getting 9.3 after about 400km of mixed driving which is pretty good considering the type of car. 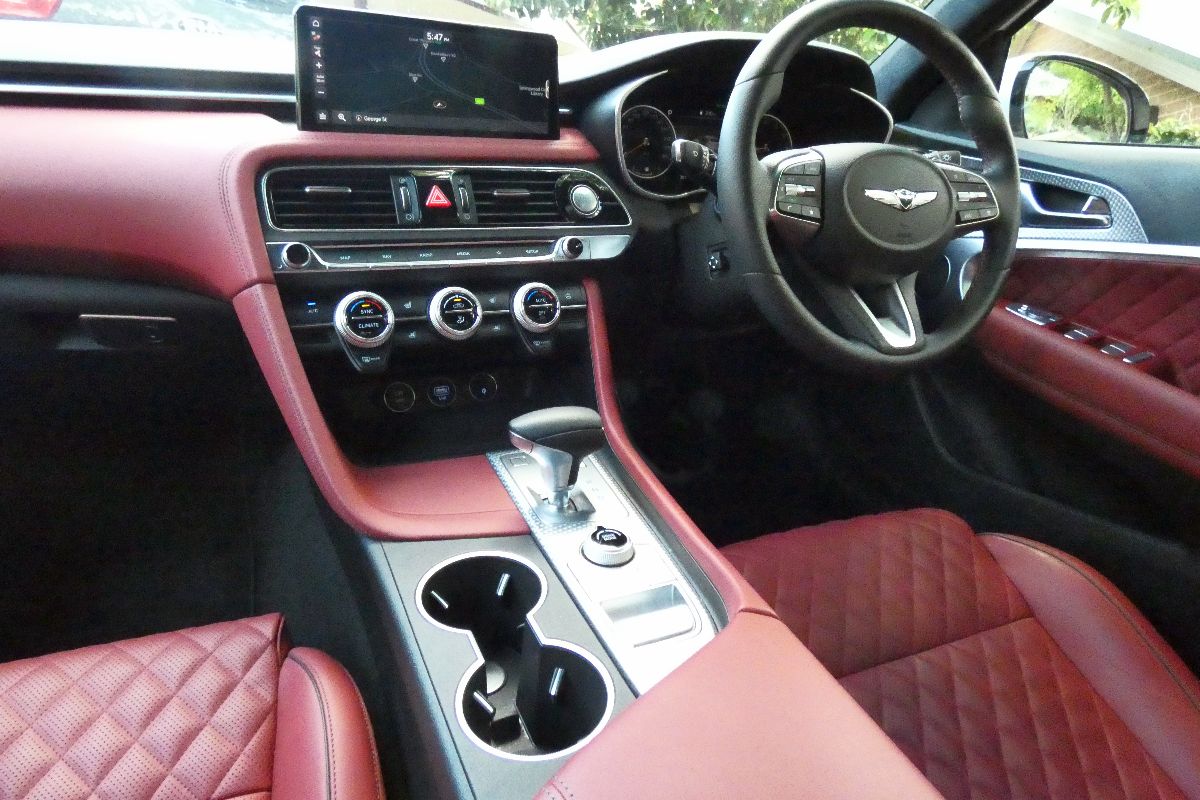 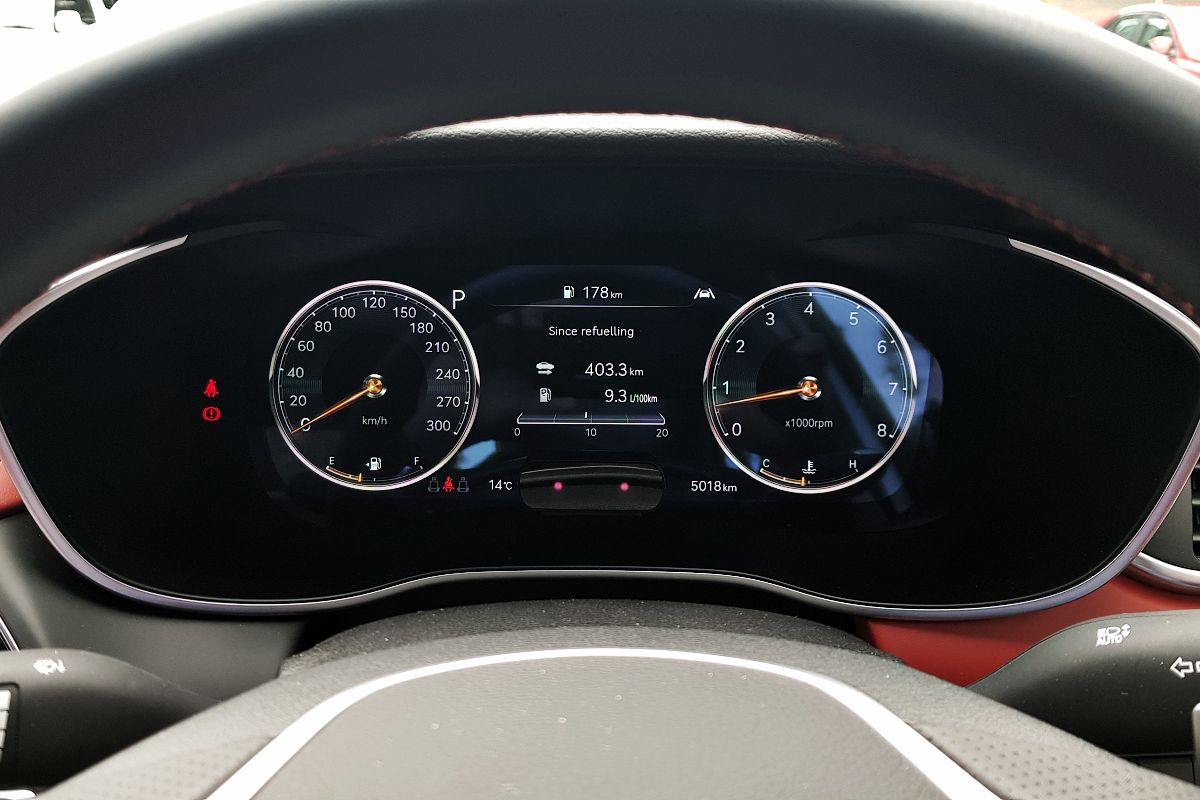 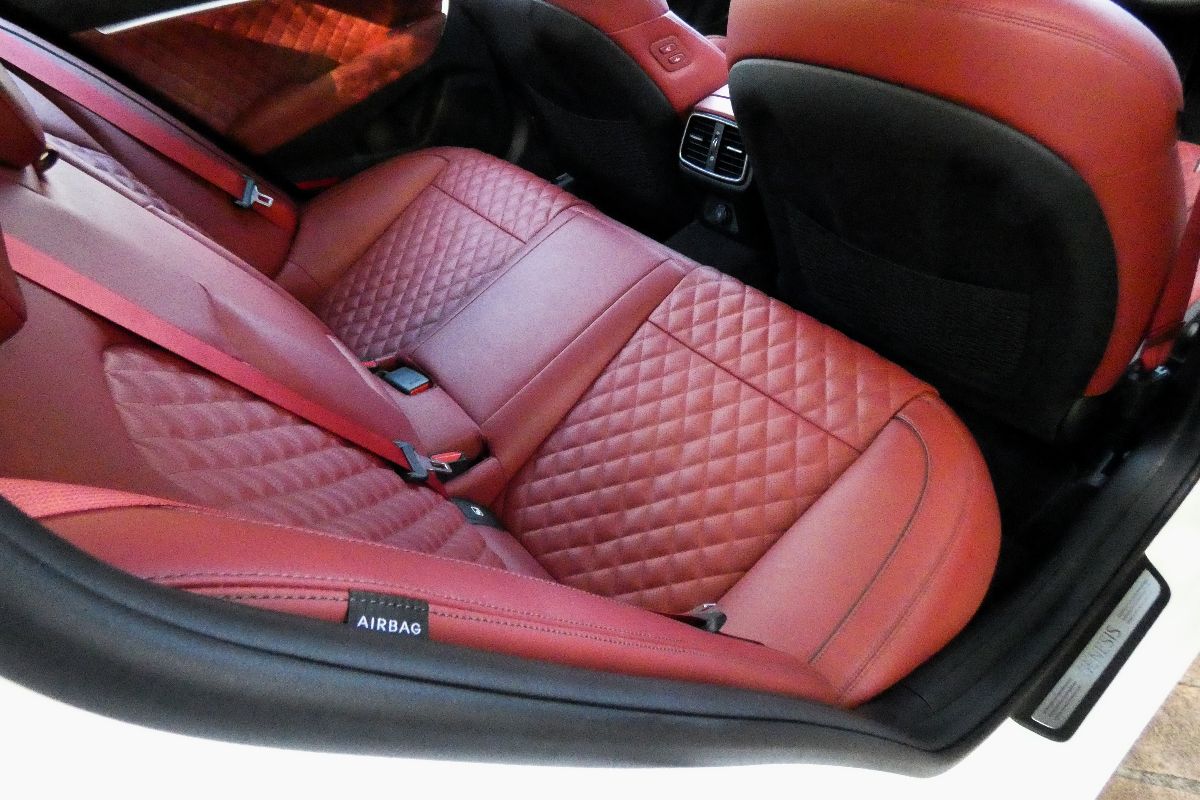 This is a car to watch.

With beautiful, quilted leather trim and shiny stainless and brushed aluminium finishes, it really is a lovely thing.

In fact, with its throaty, twin turbo, bellowing performance, we reckon G70 offers better value than a BMW 3 Series — at a fraction of the price.

G70 will appeal to buyers who want something different, that are tired of the same old fare and as the Genesis brand continues to grow — it is sure to grow in stature. 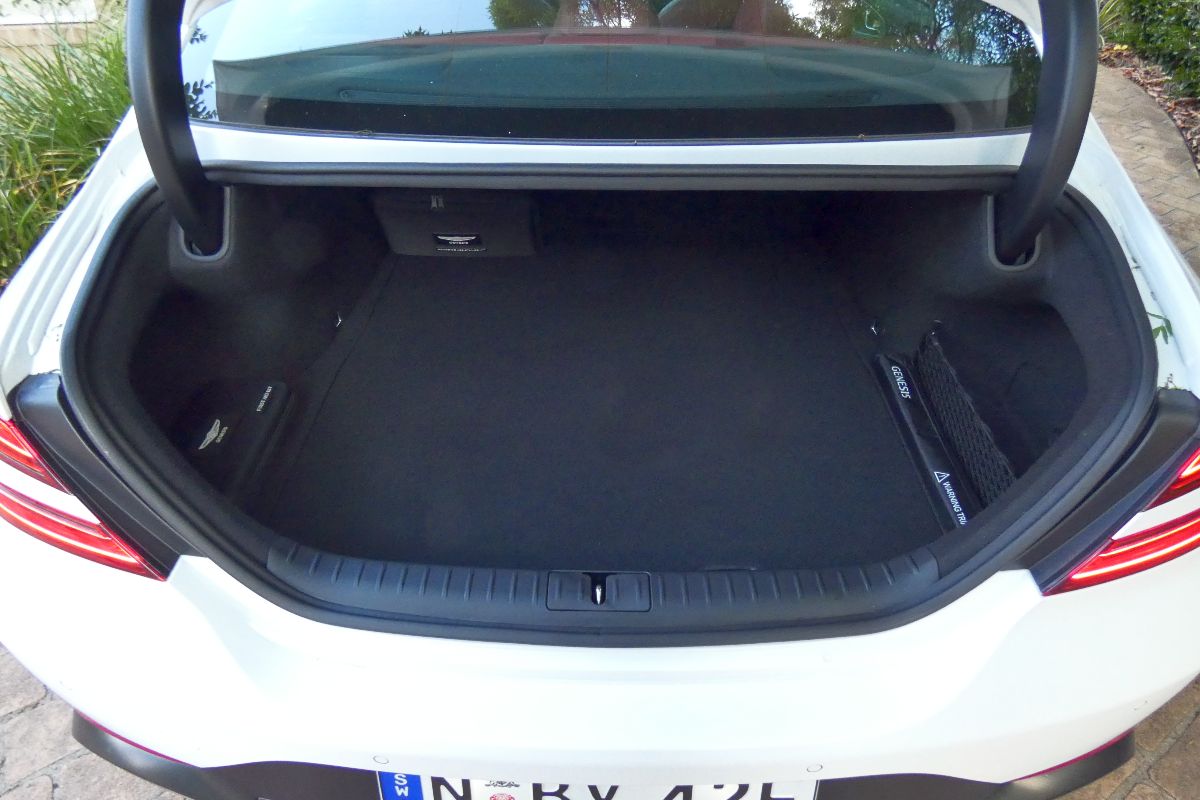