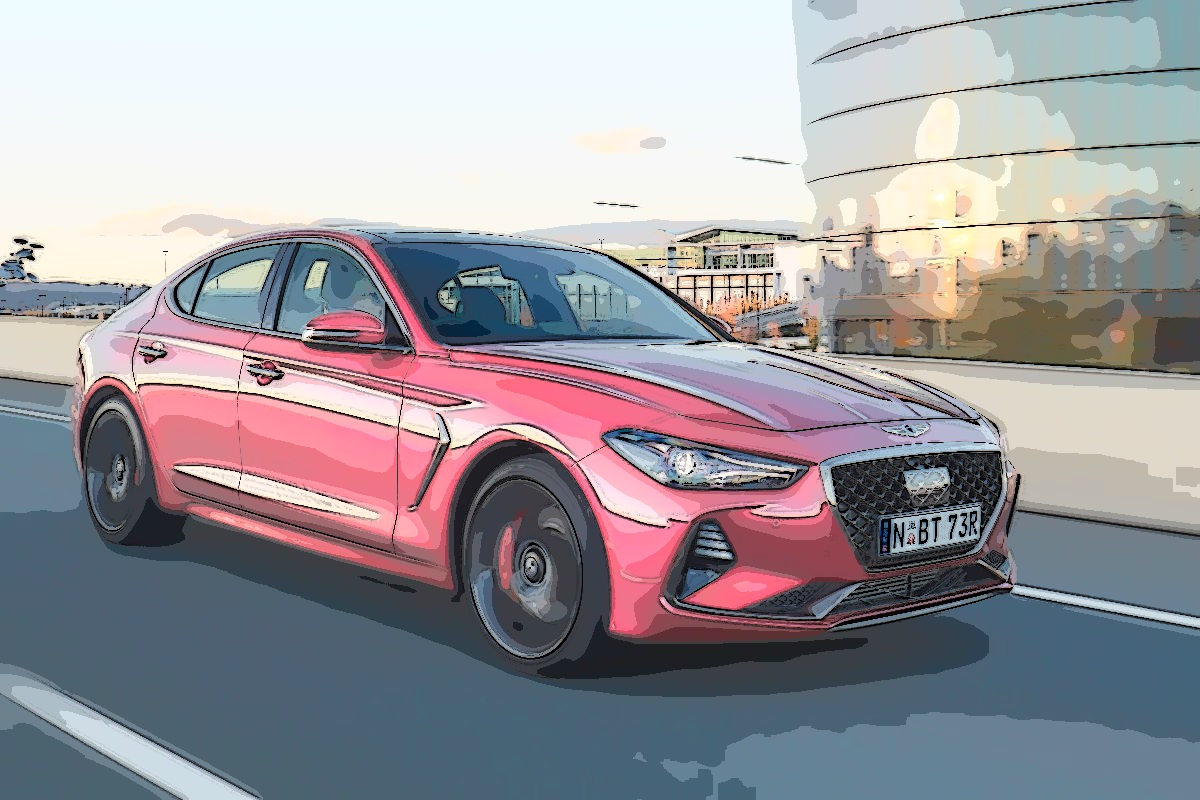 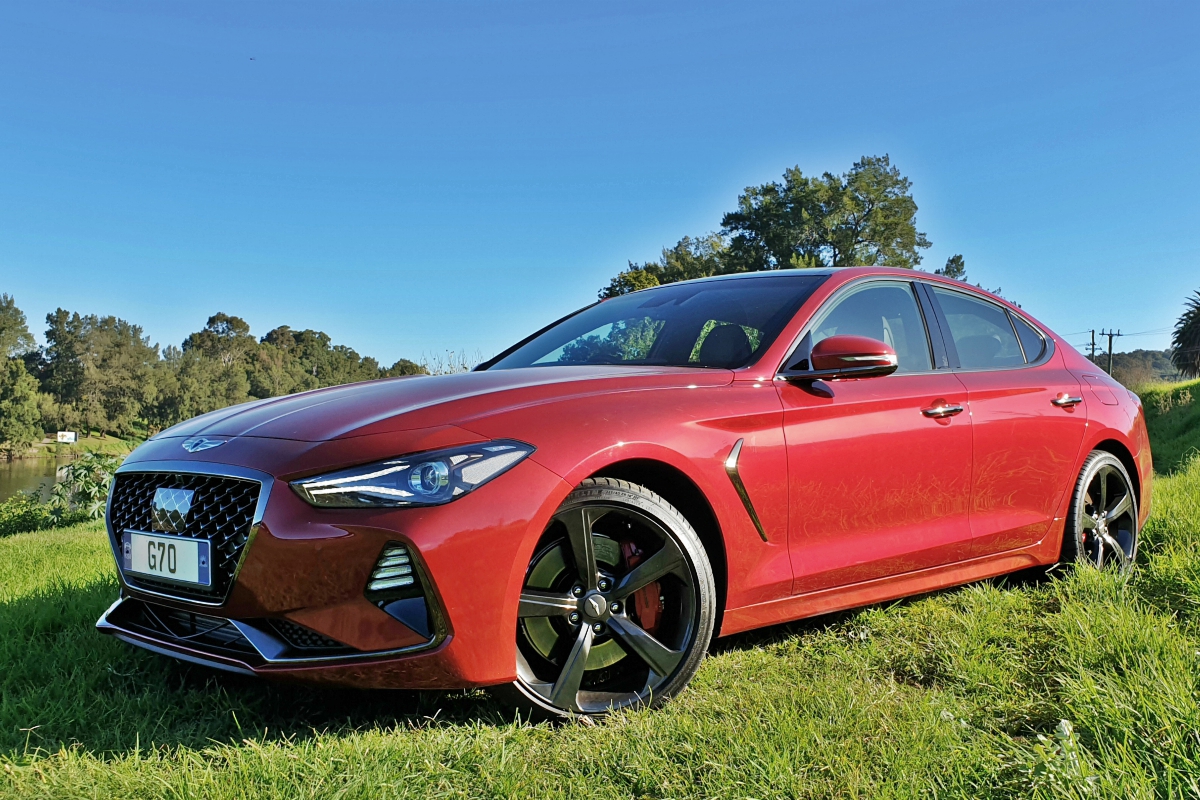 Take the engine, transmission, some soft- and hardware from Kia’s brutal Stinger V6, clad it in a similar but different body, put a Genesis badge on it, and you have the Genesis G70.

You could also slot in the Hyundai/Kia 2.0-litre turbo four if you wish. Either way, you have a car that looks the goods, promises the goods, and delivers said goods — all the while cosseting the driver in quilted leather seats.

G70 was released to the Australian market in 2019 as part of a major revamp of the largely overlooked Genesis range that saw the Hyundai badge removed — by the way.

There is also a slightly reworked G80, and a new version plus a SUV heading down under. 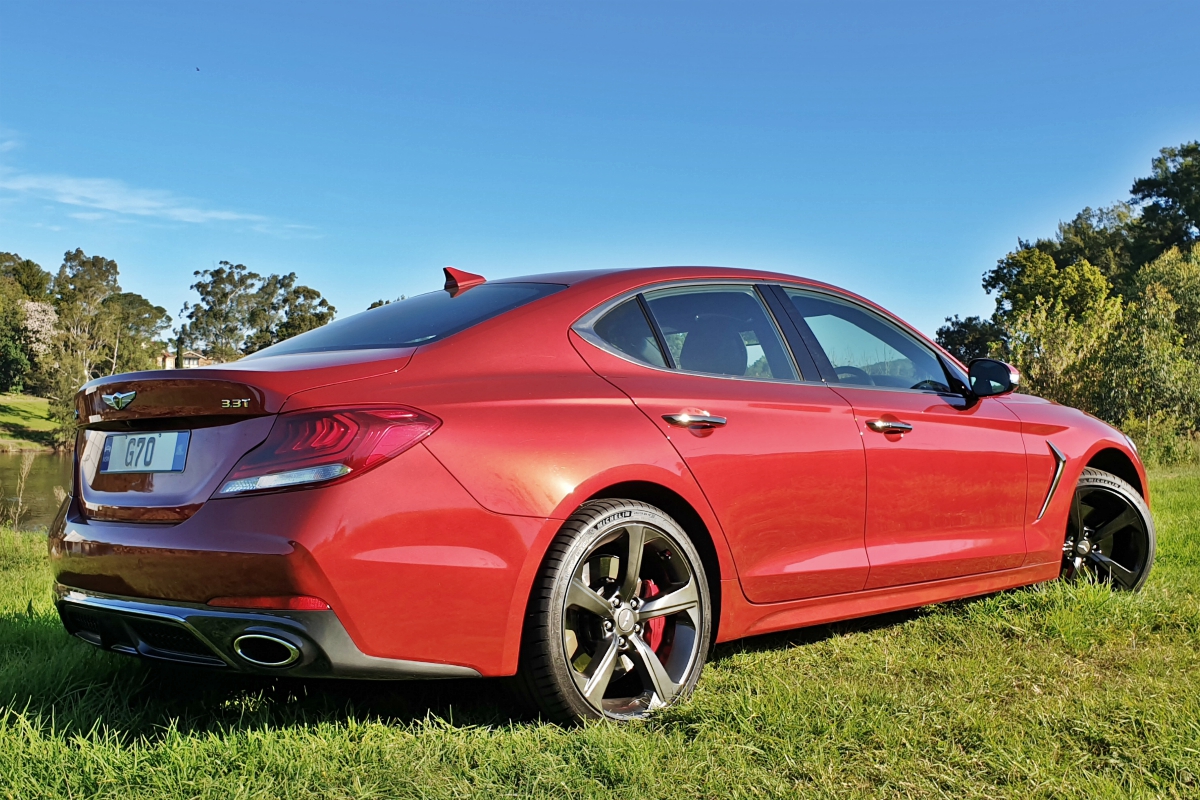 There’s a slightly odd pricing regime here, but it makes sense in the greater scheme of things.

Genesis confirms the Sport at a starting price of $80,500 drive-away, but Ultimate and Sport Ultimate share the same sticker price of $88,375 — hah?

Given the V6 versions of the G70 are exactly the same in terms of power, torque, and transmissions, it comes down to minor trim changes inside and out.

Neither will disappoint a person of discerning taste.

Plus there is a superb 15-speaker audio system from Lexicon, Head-Up Display, a 360 degree camera and heated rear pews.

Those rear pews and the front ones have a delicious quilted leather covering and, when selecting Sport mode to extract maximum grinnage, the driver seat bolsters sweep in to provide more lateral support.

Outside it’s less of a hatchback than the Stinger, with coupe styling and more traditional sedan in profile, with a defined C-pillar and bootline.

It looks capacious but isn’t. The boot holds only 330 litres and a high floor level is partly to blame here.

Rear seat leg room isn’t wonderful either. Although measured as 884mm, the actual space between the front of the squab and rear of the front seats isn’t great — think one and a half soft drink bottles and you’d be close.

Up front it’s much better, with 1083mm. A power adjust seat together with a powered steering column helps the driver find the Goldilocks position easily.

Headroom all round isn’t an issue, even with the factory fitted sunroof.

For the driver there are a few tools shared with Stinger and its lesser Hyundai brethren.

Gauges for turbo pressure, G-force readings, a lap timer, fuel economy and the like are shared — and that’s possibly the kicker.

Outside it’s the same. Clad in a truly gorgeous metallic called Havana Red, there are breaths of other brands.

Not blatantl but just enough to make you look — once, twice, thrice — before turning away, unsure if what you saw . . . was what you saw.

The colour hides the fact that at 4685mm it’s not as long as expected.

A height of just 1400mm makes it look slinkier, as does a creaseline that runs from above the front wheel arch to the Mercedes-meets-BMW tail lights.

A second creaseline at the bottom of the doors lessens weight visually.

Safety is rated at five stars, with all of the now seemingly mandatory features such as Blind Spot Warning, Collision Avoidance, and driver’s kneebag as standard. 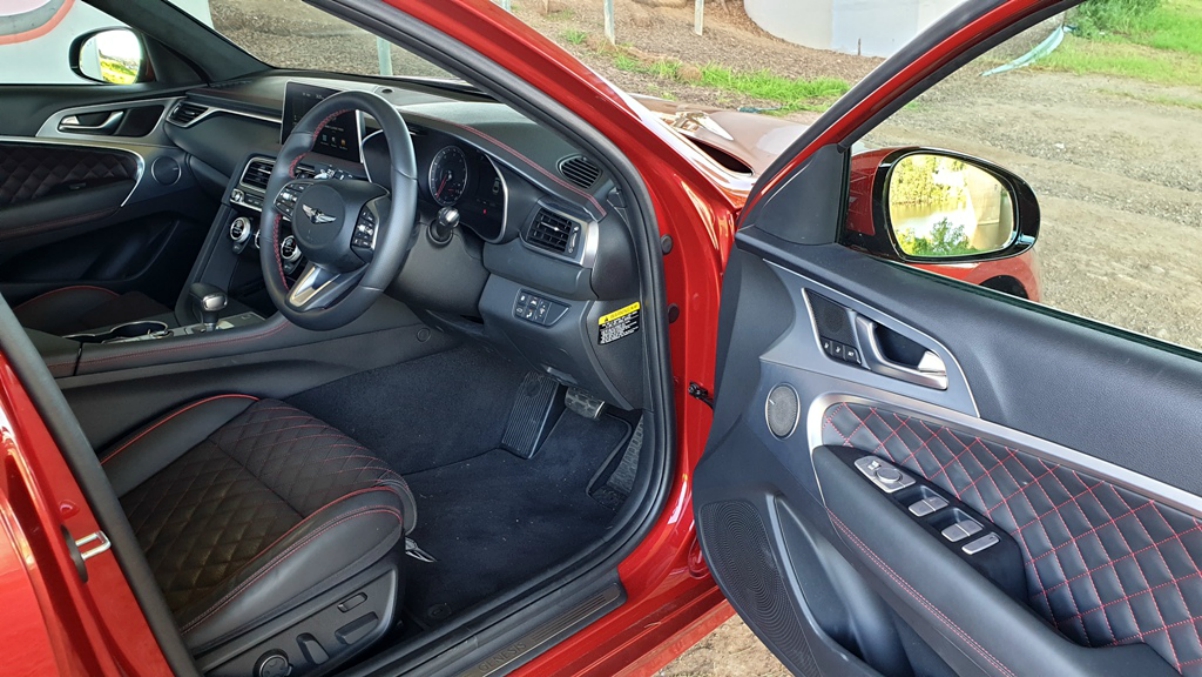 Elsewhere it’s been tested to reach the tonne in around 4.5 seconds.

In no language pertaining to cars does that indicate anything other than some serious hustle.

And in a car that weighs around 1900kg with passengers up front and fuel on board — that’s cause for some serious yeehahhhhhhh!

Launch control is fitted but that make only a tenth or two of difference.

There is 510Nm of torque on tap from almost idle and it stretches all the way through to 4500rpm, where the torque rolls off into peak power of 272kW at 6000 revs. That’s running on the preferred 95 RON.

There is an adjustment for the exhaust note, and it’s somewhat muted bark, which lacks a real sense of real growl.

But that bit is incidental as the flexibility of the twin turbo, 3.3-litre V6 makes the Genesis G70 an absolute pleasure to drive in any condition.

Custom allows a driver to have, say, Sport for the engine and transmission combination, but Comfort (a softer setting) for the suspension, and steering.

Sport tightens up everything, like a pull the skin backwards from the neck facelift. Eco is what the name suggests, and Smart learns the driver’s habits.

For true fun, Sport is the goer. The engine management response is quicker, the suspension gets more taut without losing absorbency, and the steering loads up with more feedback.

The Brembo brakes are superb stoppers and provide some of the best braking performance this side of $100K.

Economy varies and can be very good on the highway. Although our overall average was north of 9.0L/100km, we did briefly see 7.3L/100km on freeway runs.

The auto fitted is an 8-speed, and like me on a Sunday morning without a cuppa, it takes time to wake up.

It’s initially hesitant, jerky, and indecisive. Warmed up it’s nigh on the silkiest thing short of an artisan’s Japanese kimono.

Grip is prodigious thanks to the rubber and staggered profiles. Michelin supplies the tyres from the Pilot Sport S range, with 225/40 and 255/35 front and back on grey painted 19s. 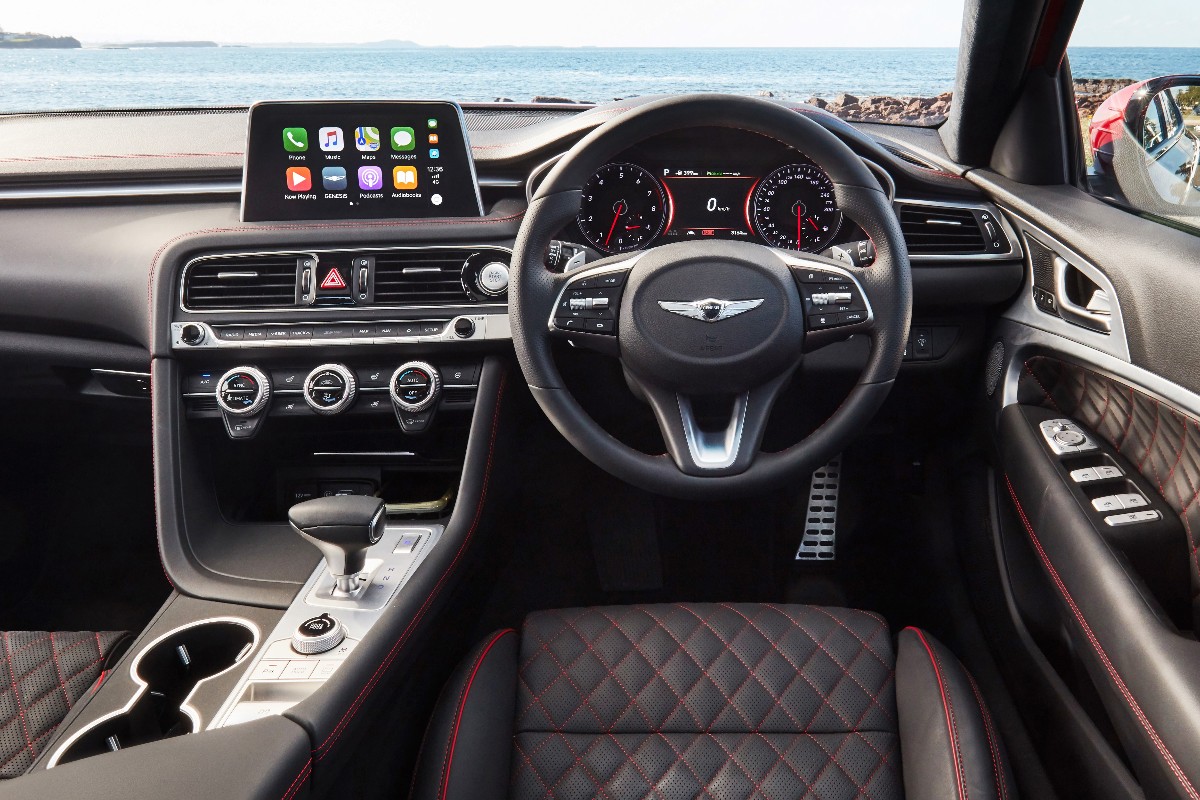 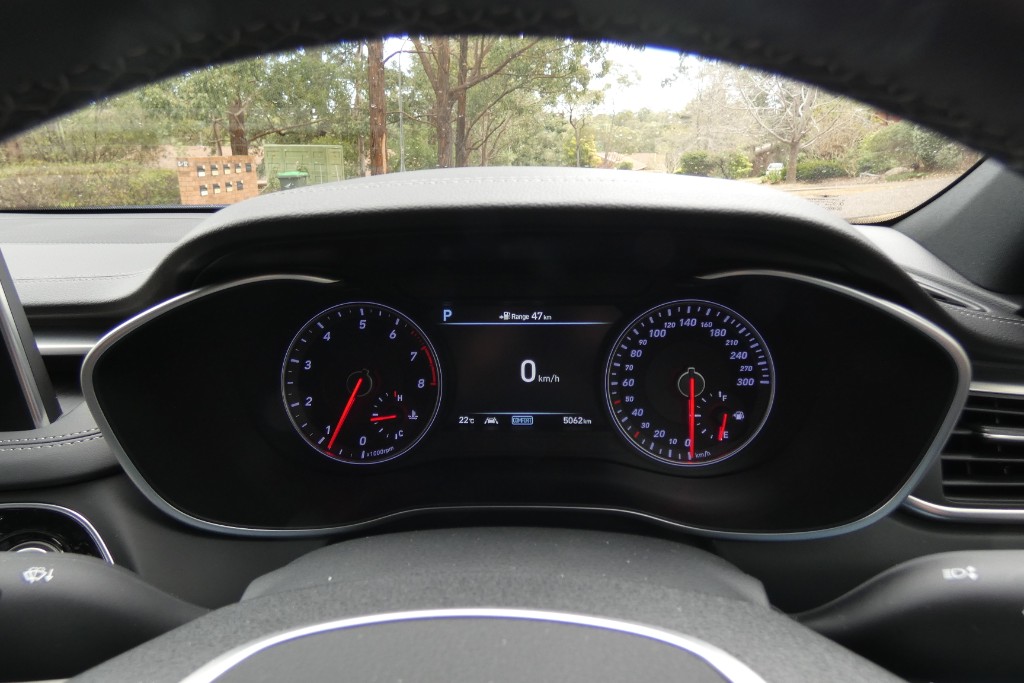 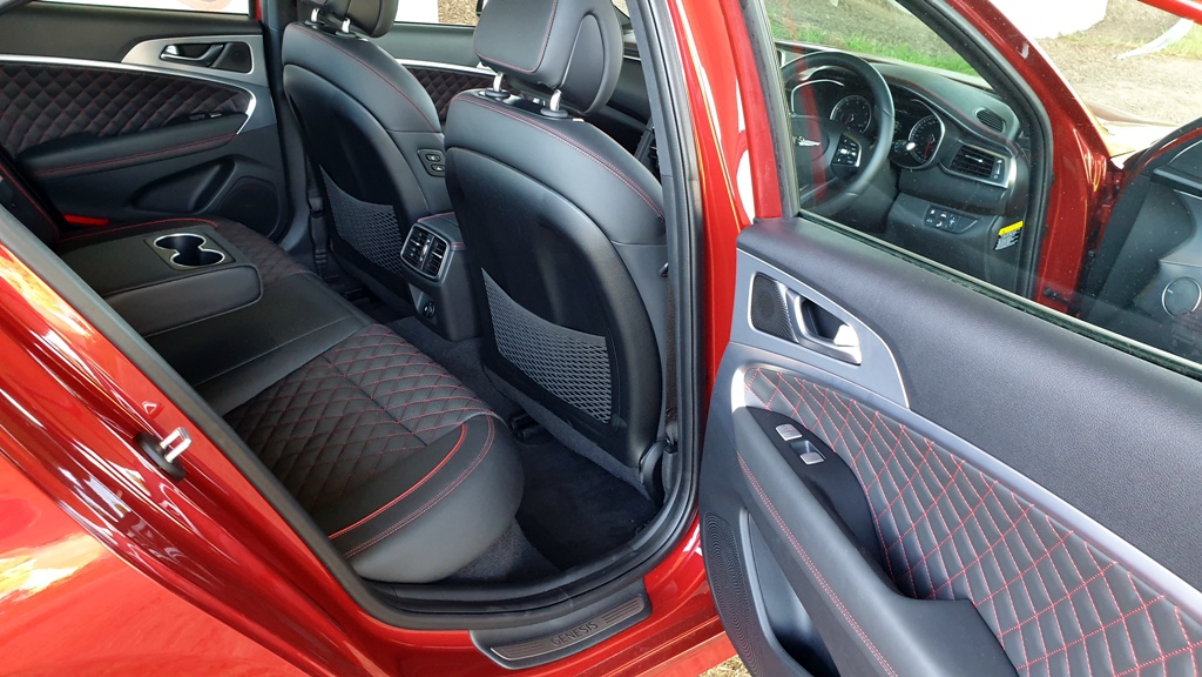 It’s the automotive equivalent of an iron first in a decadent leather glove.

It’ll allow a driver to get angry and exploit the 510Nm of torque and beautifully balanced chassis, or simply idle around with as much vigour as a dozy kitten.

It does need more Genesis inside to move it further away from the Stinger. It’s a great base to start from, but not every kid wants to hang around home all of the time.

Rear legroom and a high boot floor kind of lean towards a car aimed at DINKs. That is Double Income No Kids — so the back seat with minimal leg room and small boot suit a couple rather than family-oriented buyers.

Either way, it’s a brutally quick, yet utterly docile machine to pedal. That, at least, broadens its appeal. 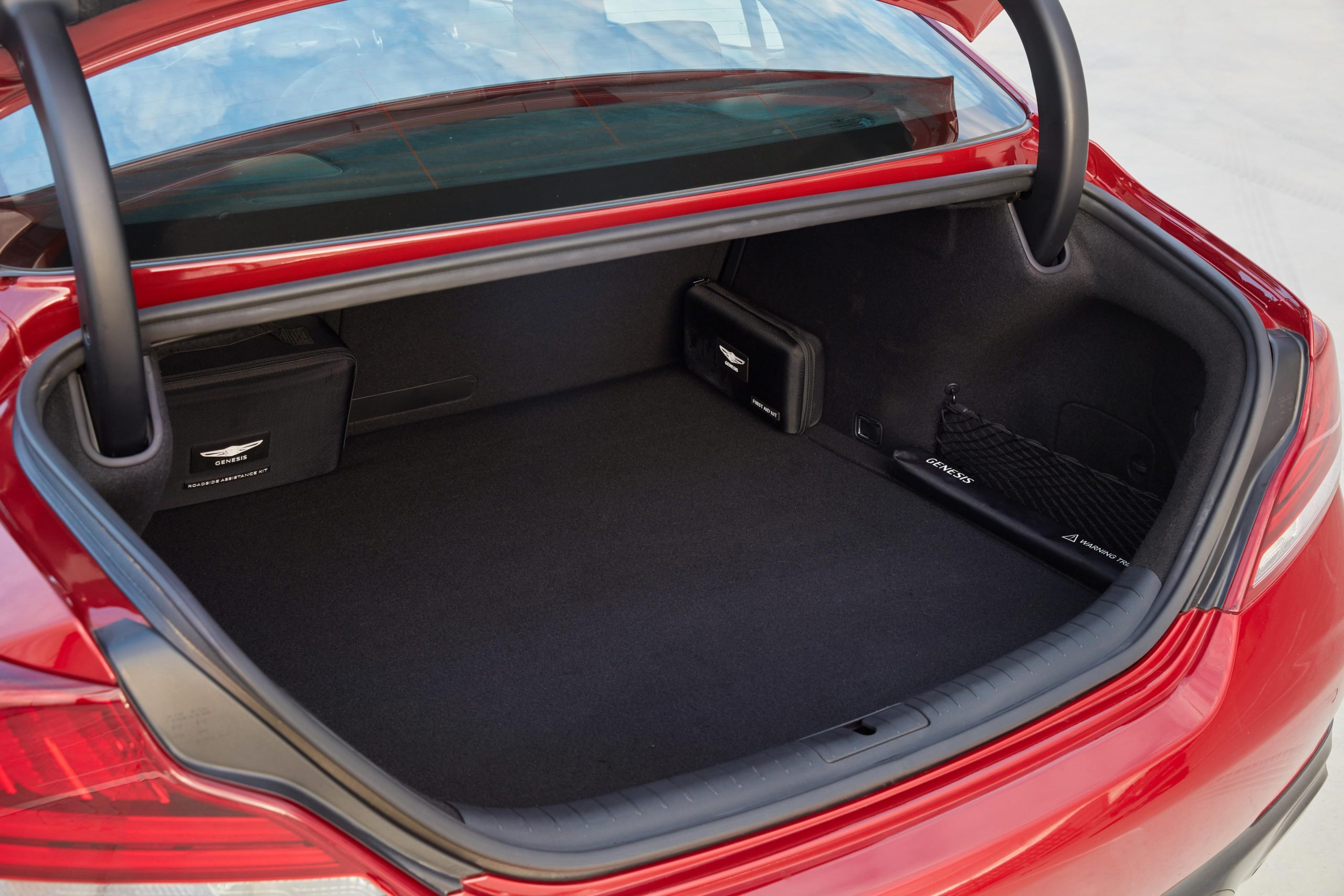