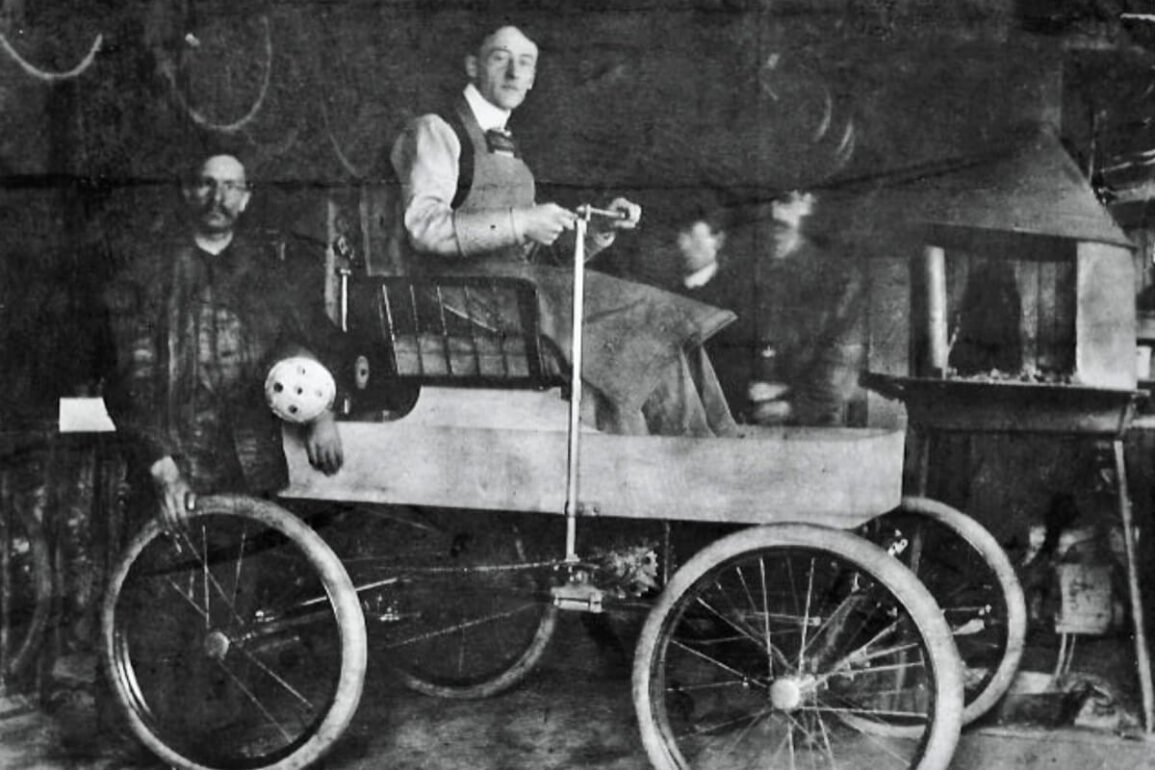 There’s just the one and it makes the Fossmobile one of the rarest motor cars in the world.

The Fossmobile was Canada’s first gasoline-powered automobile and has just been unveiled, after a painstaking rebuild process.

The unveiling was hosted by Hagerty Garage + Social.

Built in 1897, the pioneering automobile was the work of George Foote Foss, a machinist, blacksmith and bicycle repairman from Sherbrooke, Quebec.

The story goes that in early 1896, on a trip to Boston to buy a lathe for his machine shop, Foss saw his first automobile.

In the bustling city you could rent one of the electrically driven broughams for the princely sum of $4.00 per hour.

Foss paid the fee, but unfortunately his drive was cut short when the batteries died after just 30 minutes.

Upon his return home, Foss decided to build an automobile of his own that would address this problem.

This was a fellow who built model steam engines and locomotives in his spare time.

At the age of 19 he built a 52-volt electric motor for his boat that was mounted on top of the rudder and used a bicycle chain to turn the propeller.

His next project was a four-wheeled, four-horsepower, single-cylinder automobile with a top speed of 24km/h that able to climb any of Sherbrooke’s steep surrounding hills.

Quickly dubbed the “Fossmobile” the design was different from other automobiles of the time as the engine was mounted at the front.

Other automobile designers had placed their engines centered and beneath the seat.

Foss’ decision to put the engine at the front made maintenance easier and produced considerably less vibration through the seat.

In another first, the gear shift of the Fossmobile was mounted directly on the tiller-style steering arm, something that was not adopted by other manufacturers for another 40 years.

Foss built just the one example of the car and never tried to market or mass-produce his automobile.

In fact, he turned down an offer from William Farwell, president of the Eastern Townships Bank, who offered to finance production.

In 1900, Foss made what would prove to be another costly mistake.

He met Henry Ford, who offered him a chance to invest in a new company that he was trying to establish.

Foss was unsure of the future of the automobile, so he declined Ford’s offer.

Shortly after their encounter, Ford founded the Ford Motor Company.

Foss drove his car around Sherbrooke for four years before he moved to Montreal, where it sat idle for a year before he sold it for $75 in 1902.

The project to build a reproduction of Canada’s first car was the idea of Foss’ grandson Ron.

There are no original drawings of the Fossmobile, so the tribute had to be recreated from old photographs.

Ron acquired vintage parts of the era, with a plan to build this automobile, replicating parts only when it is absolutely necessary.

The tribute was meticulously assembled by craftsmen at Legendary Motorcar Company of Milton, Ontario.

Its craftspeople restored components when possible and fabricated new parts from scratch if necessary.

Since the car’s construction pre-dates colour photography, Ron made well-informed choices for the shade and design of the car, including such items as seat cushions.

The wheels that came with the chassis have been restored and refinished, keeping the tyres white as they were back in the day before carbon was introduced to rubber.

A skilled woodworker was enlisted to rebuild the body, seat and engine cowl while Ron has rebuilt a majority of the engine.

“My goal is to correctly inform Canadians of this achievement and largely untold story,” says Ron Foss.

“The automobile has become such an important part of worldwide society; it’s time that we celebrate the major role that Canada – and my grandfather – played in this process..”

Foss plans to eventually donate the Fossmobile to the Canadian Automotive Museum in Oshawa, Ontario to enhance historic education for future generations.