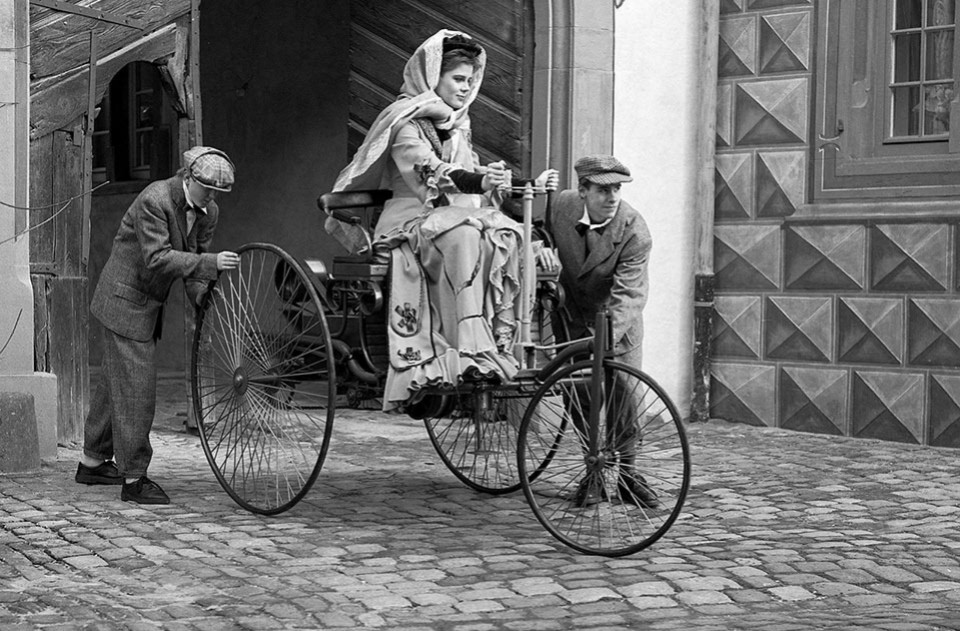 It’s been almost 135 years since the first car hit the road.

Actually, there weren’t even roads in those days, just wagon and carriage tracks, so the arrival of a motored vehicle was probably akin to something such as a spaceship.

By August, 1888, he was on Version 3.0, but the man destined to be the pioneer of automotive engineering had not yet driven any of his creations more than a few hundred metres.

Despite his engineering genius, he still regarded the three-wheeled vehicle as experimental, and had never driven further than around the courtyard of his workshop in Mannheim.

If her husband’s invention was to gain the recognition it needed to attract investors, it had to be proven that it was reliable and could cope with long distances.

So, early on August 5, 1896 she and her two young sons, Eugen and Richard, pulled the Motorwagen out of the workshop and set off down the wagon tracks to visit her family in Pforzheim — 106km away.

As the story goes, she left a note on the kitchen table for Carl, who was still asleep, saying that she was on her way to see her folks – with not a word about the “test drive.”

He later noticed that the Motorwagen was missing and realised that his loved ones were not travelling by train.

Petrol was unknown at the time, so Carl built his vehicle’s engine to run on ligroin, primarily used as a cleaning fluid.

It was a problem for Bertha, since the fuel tank held only 4.5 litres.

Ligroin was available only from pharmacies and the one in Wiesloch, which still exists today and claims to be the world’s first petrol station, was able to help them.

The long-distance travellers later bought more ligroin in Langenbrücken and Bruchsal during their journey.

Cooling the engine was even more of a worry because it used a water evaporation system and the water supply had to be topped up at every opportunity, so the Motorwagen called in at pubs, stopped at streams or anywhere else where water could be found.

There were no punctures because the rear wheels had iron rings and the front wheel was covered in solid rubber.

For the most part, it all ran smoothly: there were only a few minor technical problems en route, which were all solved.

At one point the engine’s suction-operated inlet valve got stuck, and several times Bertha had to clear a blocked fuel line with a hatpin.

The one-cylinder engine’s output of around 1.8kW at 500 rpm and its two gears were not enough to handle big gradients, so Bertha and her sons simply got out and pushed.

But their efforts were rewarded with an increased rush of adrenalin when driving downhill.

The shoe brake, operated by a lever which acted on the rear wheels, could only slow the 360kg vehicle with a lot of effort and the brake shoes quickly wore out.

On the return trip, bright Bertha stopped in Bauschlott and had a cobbler cover the wooden brake shoes with leather – and thus invented the brake lining!

They made the return trip by a more direct route and all up, they did 180km in the Motorwagen — with some incredible reactions from people they saw on the way.

Some folk thought the sputtering, smoking contraption was part of their Judgment Day and lay down, wailing in surrender — others were extremely excited by it.

Bertha, the complete mechanic, test driver, inventor and driving force, even worked out the car’s fuel consumption: 10.0L/100km — about the same as many of today’s cars.

Bertha’s trip was just the start of an ongoing story of success for the motor car.

It not only reaffirmed Carl Benz’s work, but bolstered both sales and marketing efforts in making the Benz patent motor car a success.

“In the years to follow and with new products developed, Benz & Company became the leading manufacturer of automobiles worldwide around the turn of century,” head of Mercedes-Benz Classic, Christian Boucke, said.

“We are very proud that Bertha Benz is now in the Automotive Hall of Fame together with her husband Carl – she really deserves it.”