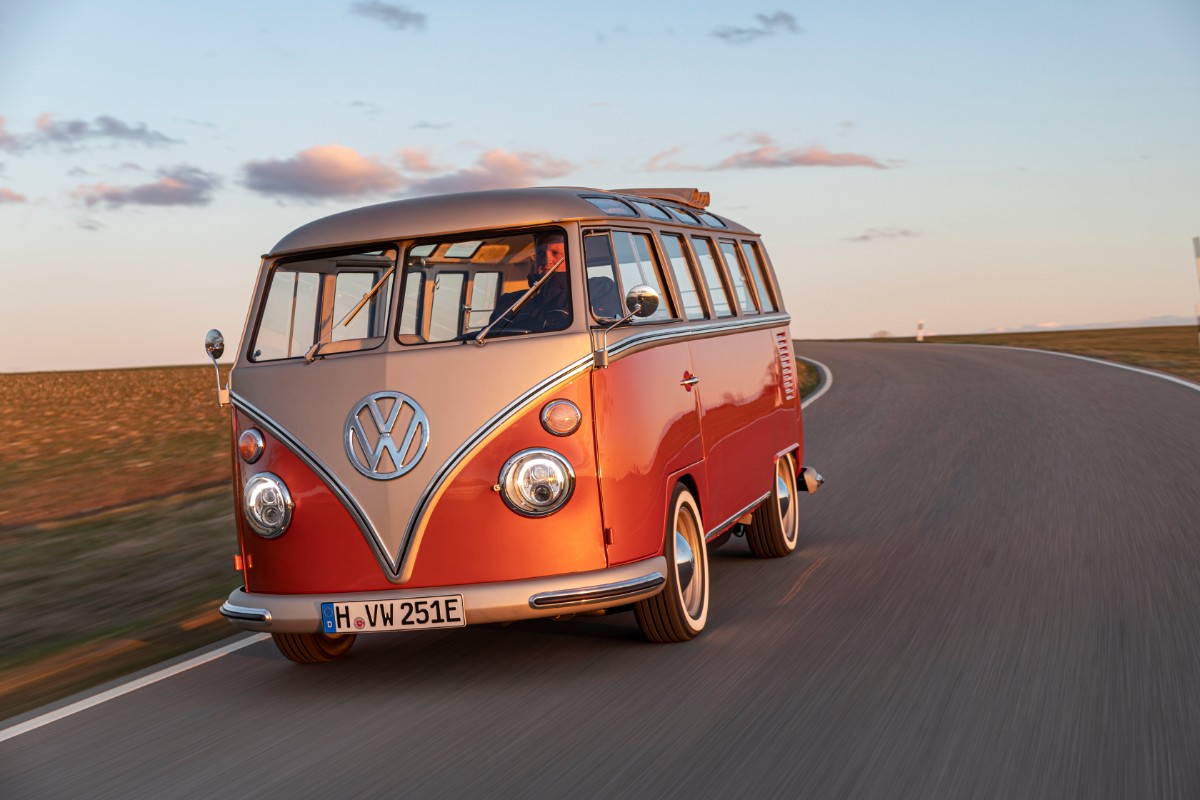 Imagine a lovingly restored Kombi from the Sixties, but with a kick-arse electric motor instead of the old flat four.

It’s called the e-BULLI concept and if these pics are any indication, it will be a terrific ambassador for the electric vehicle revolution.

In effect, you can have your cake and eat it too — or a Kombi that drives like never before.

The e-BULLI (that’s what they call Kombis in the US) is based on a 1966 T1 Samba Bus that has been fully restored.

The idea was to switch an historic Bulli over to a modern, electric drive system that produces zero emissions — to bring it into line with the challenges of a new era.

To this end VW engineers and designers formed a team along with drive system experts from Volkswagen Group Components and the eClassics company, which specialises in electric car conversions.

The 31kW four-cylinder boxer engine was replaced with a silent Volkswagen electric motor that delivers 61kW of power and 211Nm of torque, compared to 31kW and 101Nm originally.

Maximum torque is available instantly too.

Power transmission is by means of a single-speed gearbox, with the gear lever now positioned between the front seats.

The automatic transmission’s selector settings (P, R, N, D, B) are shown next to the lever.

In position B, the driver can vary the degree of recuperation of energy recovery when braking.

The e-BULLI reaches an electronically limited top speed of 130kw/h.

Just like the original, drive in the electric version is to the rear wheels.

A 45kWh lithium-ion battery is located centrally in the vehicle floor, lowering the centre of gravity to improve driving characteristics.

The battery is charged via a combined charging system (CCS) socket, and using a DC fast-charging point, can be charged up to 80 percent in 40 minutes.

Range with a full charge is more than 200km.

With a new chassis and suspension, for added comfort, greater safety and more dynamic handling, the e-BULLI feels and drives completely differently.

The designers modernised the exterior of the iconic vehicle with great sensitivity and finesse, giving it a two-tone paint job in ‘Energetic Orange Metallic’ and ‘Golden Sand Metallic Matte’.

Details such as the new round LED headlamps with daytime running lights communicate the transformation to the modern era.

At the rear, there are also LED charge indicators, which signal to a driver walking up to the e-BULLI how much charge the lithium-ion battery still has even before they reach the vehicle.

It is only when you look through the windows of the eight-seater that you notice a few things are not quite the same.

The seating is one of the new features. In keeping with the external paintwork, it is also in two colors: ‘Saint Tropez’ and ‘Saffrano Orange’.

Positioned within a console between the driver and front passenger seat is the new automatic transmission selector.

The start/stop button for the electric motor is also integrated here.

Solid wood in the look of a ship’s deck is used for the floor throughout.

Combined with nice bright leather tones, it gives the bus a maritime feel.

This impression is strengthened by a large panoramic folding roof.

The dash has been sensitively modernised too.

The new speedometer is based on the original, while an integrated two-digit display creates a link to the modern era, with a variety of information, including range.

LEDs also indicate whether, for instance, the parking brake is on or the charging connector is plugged in.

An additional detail in the centre of the speedometer: a stylised Bulli symbol.

A multitude of further information is shown via a tablet integrated into the roof console.

Via Volkswagen ‘We Connect’ the driver can also call up information online by smartphone app or via a PC and a corresponding web portal such as on remaining charge time, current range, miles travelled, trip times, energy consumption and recuperation.

Music on board comes from an authentic-looking retro-style radio, which, however, is equipped with cutting edge technology such as DAB+, Bluetooth and USB.

The radio is linked to a sound system with out-of-sight components, including an active subwoofer.

The best part however is that you could own one of these fantastic electric Kombis, at least in Europe.

eClassics is offering the T1 conversion, complete with redesigned front and rear axles, at prices starting from 64,900 euros — that’s about $120,000 Aussie dollars.

T2 and T3 conversions are also being offered and the company, along with a ready-to-fit parts kit for qualified dealers.