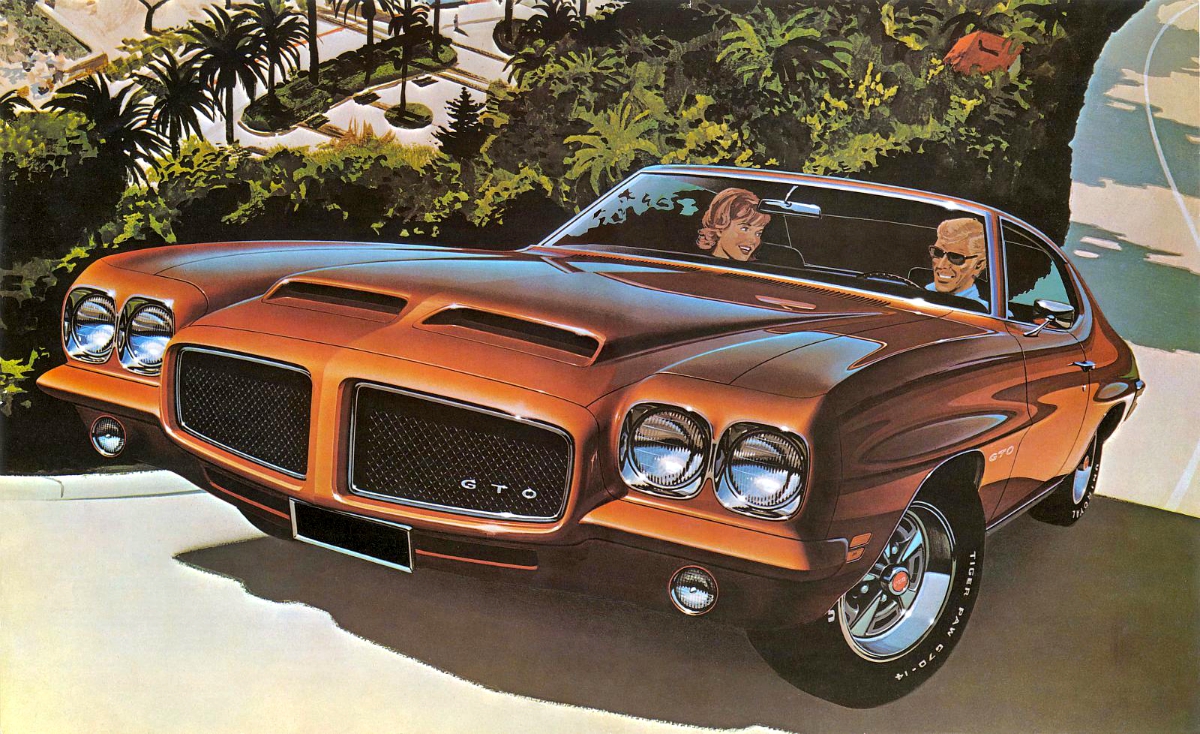 In these days of digitised and enhanced images in car advertisements, the art of the hand-drawn images has been lost.

Back in the day, before high quality colour film and cameras, most car advertisements consisted of hand drawn images.

Each car company sought out the most talented artists to render their products in black and white and colour.

It was a well paid job and many of the artists went on to careers as car stylists.

GM’s design boss of the 1960s and 1970, Bill Mitchell, began his career as an Illustrator for Colliers advertising agency and one of its clients, MG.

Virgil Exner, who ran Chrysler’s design efforts in the 1950s, worked in an advertising agency and was very much involved in Studebaker’s promotional efforts, producing many fine drawings.

Pontiac’s advertising campaigns in the 1960’s are considered the best of the art form and had a lot to do with Pontiac’s rise to the number three sales position behind Chevrolet and Ford in the USA.

Between 1959 and 1971, those advertising campaigns were driven by the artwork of Art Fitzpatrick and Van Kaufman — Fitz and Van, as they were known.

Art Fitzpatrick began his career as an automotive designer and in the 1950s did advertising art for Mercury, Plymouth and Buick.

Van Kaufman started his art career as a Disney illustrator.

He subsequently spent time in Europe, and developed a European style in his illustration.

Their advertising art was so good and so popular that in 1965, then Pontiac General Manager John Delorean, insisted for a time that all Pontiac advertising art work was done by Fitz and Van, and that photographs not be used.

During their tenure, providing Pontiac with advertising images, Art Fitzpatrick drew the cars and Van Kaufman drew the scenery and people.

Many of their advertisements featured their initials, such was their popularity.

It was the evocative combination of dreamy and exotic locations, visually successful people and razor-sharp rendering of the cars that galvanised attention.

Their art appeared in Pontiac brochures and magazine ads.

Those ads frequently appeared in such upscale publications as National Geographic and Life.

Art Fitzpatrick’s style was to illustrate Pontiacs to look even lower and wider than they already were.

But his talent allowed him to do so without the cars ever looking cartoon like.

It is rare to see hand drawn automotive advertising these days.

The wizards of the digital and Photoshop generation have taken over the creative space.