Much has been written about the massive turnaround by the NSW Blues in State of Origin II in Perth after a pretty ordinary game one by the Blues.

Some critics have been giving most of the credit for the win to Blues coach Brad “Freddy” Fittler for having the guts to make major changes to the team after the Suncorp Stadium loss.

Well, today, I can reveal exclusively the real reason for the Queensland loss — and while Fittler is sort of responsible — it is actually Maroons Coach Kevin “Kevie” Walters who is to blame.

I have just obtained secret and illegally obtained tapes from the Queensland dressing room in Perth in the days leading up to State of Origin II.

I can’t reveal my sources. All I can say is the NSW team had nothing to do with it.

My source actually thought it was the Womens State of Origin Game being played in Perth as he didn’t think the NRL would ever take a game to the west.

At least, that’s what he told me when he sold me the tape. The sound quality was poor and the vision was very grainy, so I had to fill in some gaps here and there.

He didn’t plant the eight cameras with the intention of stealing any gameplans. He did it for his own sexual gratification.

It was only intended for a few close friends and a couple of million YouTube subscribers.

Don’t judge him. He is seeking counselling.

When Fittler took over as Blues coach, he brought with him some innovations, including Yoga, and walking on the field in bare feet to become one with the playing surface.

Don’t knock it, the Blues won the series last year.

Walters was already feeling a bit insecure. You see, while Fittler’s friends had spent a bit of time thinking up the nickname “Freddy”, the best that Walters mates could manage was to shorten his name from Kevin to “Kevie”.

So this year, eager to beat Fittler at his own game, Walters employed a coach whisperer, and one of his ploys was not to allow any of his players to mention NSW or the Blues by name in the lead up to game one.

Fines were imposed on players who mentioned the Blues. They simply had to use the term “the other team”.

For game II, he expanded this, so that they couldn’t even mention the names of NSW players, with hilarious results — as can be seen from the following transcript:

Kevin Walters: All right, are all of the players here?

DCE: Alfie’s not here yet. He’s ducked down to the TAB.

KW: I meant the actual players, not the blokes who spend more time on the field than the players.

KW: Do you think you guys could actually spend a bit of time thinking up a real nickname for me. The other coach has a great nickname, and Alfie’s nickname is brilliant.

KW: Never mind, let’s get back to the game. Right, the other team will come out firing. We’ve forced them to make some big changes. They’ve brought back whatshisname who is a big game player, so we’ve got to watch him like a hawk.

Dane Gagai: Which one, they brought back quite a few (a bit of laughter).

KW: You know the one. Plays in the backs, been to few clubs, plays for Penrith.

KW: (slightly angry) What did I tell you about mentioning their names. Allright Dane, you know the rules, you get 10 minutes in the bin. Now where was I?

DCE: You were talking about Blake Ferguson. 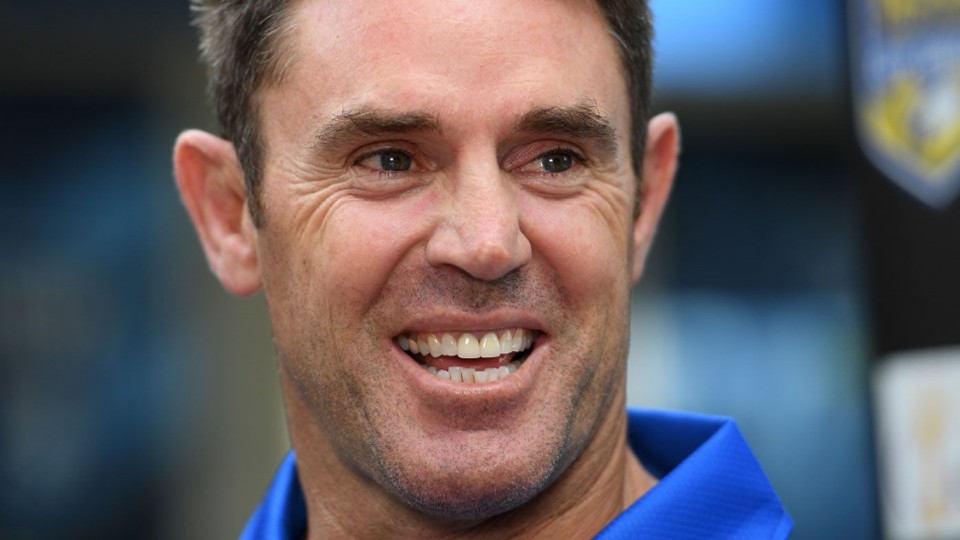 KW: Right, both you blokes get out. Let’s move on. Now we know that one of the new forwards has a good right foot step, and has an off-load in him, but he only off-loads with his right arm — so Josh, it’s your job to mark him.

KW: The bloke I was just talking about.

KW: No, Which One is Matt Gillet’s man. You got that Matt?

KW: Not Who. Josh has Who. You mark Which.

KW: No, listen up. Josh Maguire has What.

JM: I thought I was supposed to smash Jimmy Mal . . . Oops, sorry coach.

KW: Glad to see someone is paying attention.

MM: Look, I can handle him easily, but make sure Oates doesn’t come in to help. He’s got to keep his eye on Josh . . .

KW: (angry tone) WHAT? Did you just mention the player’s name.

KW: Now why would Corey have to worry about Josh Papalii,? YOU’RE ON THE SAME TEAM. YOU MEANT FFFFFFOOO . . .  I MEAN THAT OTHER PLAYER, DIDN’T YOU?

The rest of the tape is completely inaudible, but is seems fairly clear that by the time the Maroons ran on the field, they were so confused, they had no idea which team they were on, let alone who they were supposed to tackle.

Us Blues supporters are hoping for more of the same in Game III this week in Sydney, which will prove my earlier prediction that the Blues will win the series, 2-1.