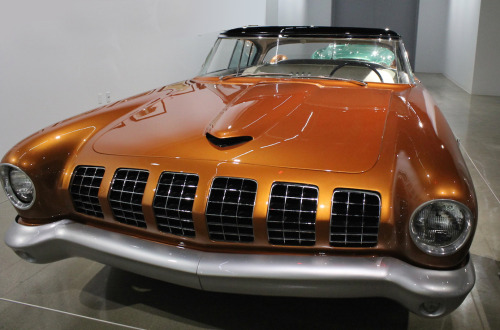 One of the least known of Ford’s mid-50s concept cars is the “Beldone” or Mercury D-528.

The name D-528 stemmed from the fact it was the 528th experimental “design” project at Ford.

The D-528 was built in 1953-54 to test advanced ideas for air conditioning, seating layouts and door opening configurations.

The cantilever roof was self supporting because the car had no “A” pillars at the front.

The fuel tank and spare tyre were located in the rear mudguards.

Fully operational, the orange D-528 featured an experimental version of the yet-to-be-released Y block V8 linked to a two-speed automatic.

The car was never seen by the public and remained behind closed doors at Ford until the early 1960s when it was sold to George Barris, the famed Los Angeles car customiser.

Barris convinced Ford he could garner them publicity by having the D-528 appear in movies and TV shows.

Barris later bought the 1955 Lincoln Futura show car from Ford for a reported one dollar, changed a few panels, painted it black and called it the Batmobile.

In 1964 when Paramount Pictures needed a special car for their Jerry Lewis movie The Patsy, Barris showed them the D-528.

Paramount executives said: “Yes, that’s the one we need!” and the car was painted bright red and re-christened the “Beldone”.

For the movie the Beldone was equipped with remote control devices that opened and closed the doors, boot, and bonnet.

These devices were central to one of the comedy scenes in the movie.

After the film was completed the car was stored on the Paramount backlot.

It was later used in the TV series The Duplicate Man and had a small part in the movie Back To The Future.

Barris sold the car in 1984 and after passage through several owners it was fully restored.

It is now part of the collection at the Petersen Auto Museum in Los Angeles.

The D-528/Beldone helped Ford solve a range of engineering problems that were later used in production cars.

The interior crash protection ideas informed Ford’s 1956 decision to promote passenger safety features, not that the public was particularly responsive.

The wind down rear window was a Mercury feature well into the 60s.