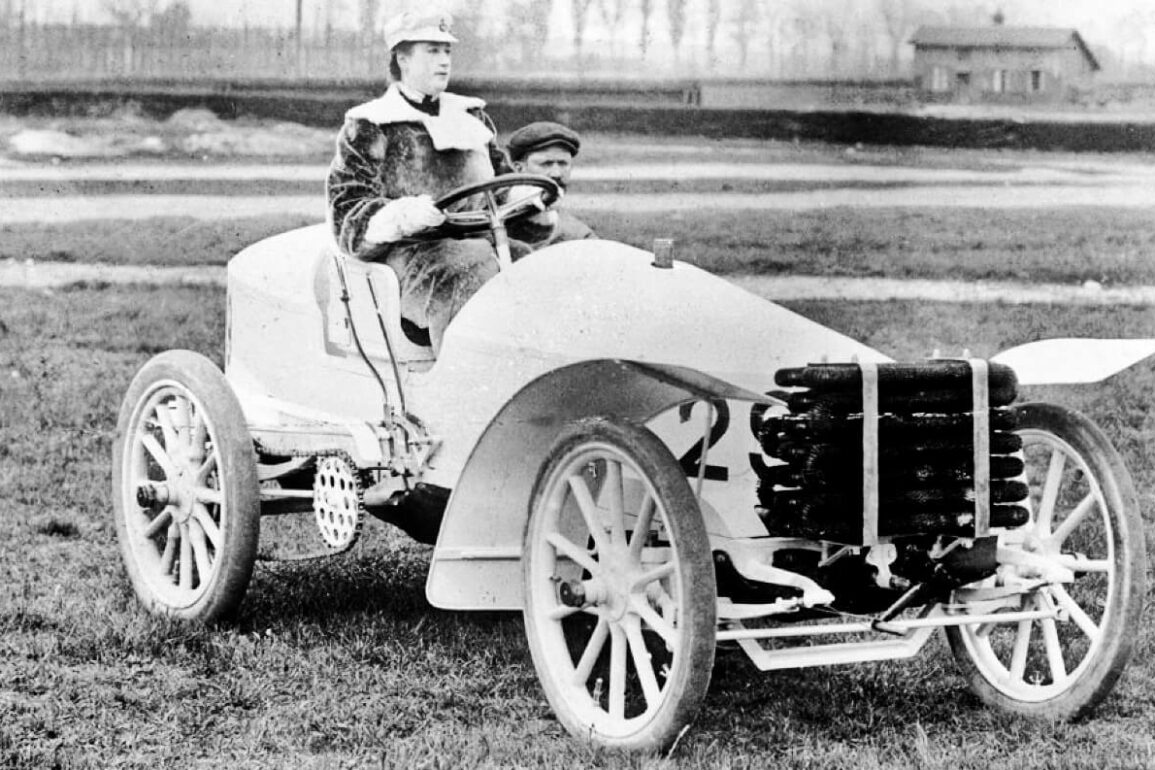 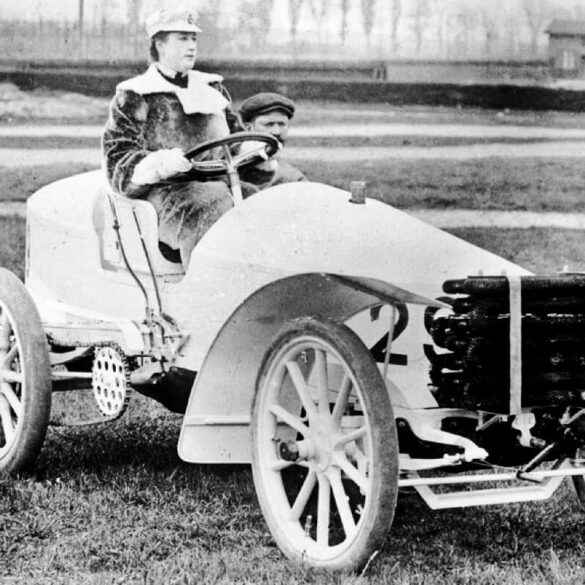 Camille a woman ahead of her time

Home
Wheel life
Camille a woman ahead of her time

CAMILLE du Gast was one of those extremely rare talents, brilliant at just about everything she did.

Imagine a Sam Kerr, Ash Barty, Margot Robbie, a touch of Mother Theresa and a dozen other top achievers packed into one person.

Go back about 150 years and you have the charming, beautiful and super-talented Marie Marthe Camille Desinge du Gast.

Born in Paris, she was a flamboyant lass who scorned convention, but her beauty, grace and manifold achievements made her one of the most admired and popular women in France. Also one of the wealthiest.

She did things most mademoiselles of the time wouldn’t dream of doing, but in her own words . . . “Life is just too boring for women.”

Camille became only the second woman to compete in a car race in France and the second to obtain a driver’s licence.

She was also the first woman to get a speeding ticket and the first to race consistently, and at international level.

She became an accomplished fencer, skier, rifle and pistol shot, horse trainer, concert pianist and singer — but it was as a balloonist that she first captured public interest.

Camille was also regarded by many as one of the most beautiful women in Paris.

She was green-eyed, fair haired, with a shapely corseted figure, sharp sense of humour and dazzling smile.

She achieved notoriety when she was named as the masked model in the much admired Henri Gervex painting, La Femme au Masque.

It was an exquisite work, a nude portrait of a masked woman whose identity was never revealed.

It was a sensation from the start and women across ‘polite society’ were accused of being the sitter for the painting, then in 1902, she suddenly became the central figure in the scandal.

She denied it was her, so did Gervex, but people still liked to compare the looks of the elegant Camille with the painting, and the picture invited a barrage of speculation.

At the age of 22, in 1890, Camille married Jules Crespin, who was the manager and majority shareholder of Dufayel’s, one of France’s largest department stores.

At this time she was a society member and one of three pioneering French female celebrities of the Belle Epoque, also known as ‘France’s Gilded Age.’

She was always combative in nature, daring and full of ambition.

Among her ‘hobbies’ were fencing, tobogganing, skiing, rifle and pistol shooting and horse training.

Both Crespin and Camille were enthusiastic hot air balloonists.

The department store actually owned two balloons which were used for publicity.

In 1895, it was from one of these balloons that Camille made an historic parachute jump.

From a height of 2000 feet (610m) she became the first woman to make a parachute jump and set a record in the process.

Husband Jules died in 1896, leaving the 27-year-old Camille a very wealthy widow with a young daughter.

Far from daunted, she took up even more sporting activities and travelled extensively.

In 1901 she entered the 1901 Paris-Berlin race driving her late husband’s 20CV Panhard-Levassor, a car built for comfort, rather than speed.

Also in the event was Baroness Hélène van Zuylen, wife of the president of the Automobile Club de France.

They were the only two women and this established Camille du Gast as only the second woman to take part in a motor race.

Organisers decreed that as a novice woman driver, in a non-racing machine, Mme du Gast had to start last.

The race was run over three legs, the first was 459km from Paris to Aachen, next day was another 447km from Aachen to Hanover, then the final 299km was from Hanover to Berlin.

Henri Fournier, in a Mors, was the overall winner with a time of 15 hours 33 minutes.

But Camille had driven so well that her number 122 Panhard finished 33rd overall, despite having to start last of the 122 entrants.

Baroness Hélène Zuylen, her sole female rival, was forced out of the race with technical problems on the first day.

In 1902, Camille applied to compete in the New York to San Francisco race, but her entry was turned down because she was a woman.

It was a sentiment quite prevalent at the time and although she was very popular with the French public, hostility toward female drivers was commonplace.

Even The (UK) Autocar magazine said: “The gallant French men applauded and raised their hats, but for ourselves we must confess to a feeling of doubt as to whether fierce long-distance racing is quite the thing for ladies.”

However, in 1903, she was hired by Adrien de Turckheim to drive a 5.7 litre 30hp De Dietrich, a proper racing car — in the Paris-Madrid race.

Her aggressive driving saw her running as high as 8th when she came across a crash just outside Bordeaux.

Recognising the car as another De Dietrich she stopped to give aid.

Englishman Phil Stead had been pinned under his car when it rolled into a ditch.

Camille’s mechanic was able to move the car for her to nurse the injured man until an ambulance arrived.

The ‘Race of Death’ was stopped by the French Government at Bordeaux due to the high number of fatalities.

Two drivers died, as did at least six spectators.

On the basis of her performance in the 1903 race the Benz factory team offered her a drive in one of their cars in the 1904 Gordon Bennett Cup.

However, the worsening political attitude to road racing led to the French Government citing ‘feminine nervousness’ and barred women from competing in motorsport.

Camille wrote a letter of protest in April, 1904 which was published in L’Auto; it had little effect.

Her skills were never doubted, it was simply a reaction to the tragic events of the 1903 Paris-Madrid race.

Then she found no such rules existed in Britain and in July, 1905 took part in the inaugural Brighton Speed Trials.

Levitt also used this car to set a World Speed record for Ladies.

In 1904, Camille became the only woman official of the prestigious Automobile Club de France.

Apart from France, she entered countless competitions across Europe.

Gordon Bennett, a fellow car enthusiast, media mogul, racing sponsor (and allegedly Camille’s lover), described her as “the greatest sportswoman of all time.”

But the general consensus was that driving was too dangerous for women, so Mme du Gast turned her racing interests to motor boating.

She piloted a sleek Marsouin launch, powered by a Darracq engine, on the Seine at Juvisy-sur-Orge, Paris, in September, 1904 and attracted a lot of attention with her trendy attire and prowess at the tiller.

In April, 1905, Camille used her boat La Turquoise, powered by a 150hp 6-cylinder Panhard engine, to enter a 100km race in Monaco — but failed to finish.

The race was won by renowned Sydney-born motor racer S F Edge in his Napier II.

In May, 1905 the Paris newspaper ‘Le Matin’ organised, and sponsored with Mercedes Paris, the trans-Mediterranean race from Algiers to Toulon.

Mme. du Gast commissioned the Pitre Company of Paris to build a launch specifically for the event, a 43 foot steel hulled vessel with a 90hp Charron, Girardot et Voigt engine.

The race was literally a wash-out when a vicious storm sank most of the boats, as well as some navy escorts.

Camille made the best progress but eventually her launch also succumbed to the heavy seas and was taken in tow by the battleship Kléber.

However, the launch broke free and started to sink and Camille and her crew had to be rescued.

She was featured on the front page of ‘Le Petit Journal’ on the May 30, 1905. It heralded the ‘Rescue on the Algiers – Toulon race’.

But she still won. After two months of official wrangling, Camille, having come closest to finishing before sinking, was declared the winner.

The New York Times reported that: “Mme. Du Gast . . . has sent 10,000 francs to the sailor who jumped into the sea from the cruiser Kléber and rescued her during the storm that scattered the racing boats.”

Camille du Gast was already known to the press as la Walkyrie de la Mécanique (Valkyrie of the motor car),.

Now she was also called  l’Amazone, a title befitting her valiant struggles with the sea.

But this exuberant and daring woman was about to endure a traumatic and life changing event.

Not a motoring crash or near drowning at sea, not a house fire or financial collapse, in many ways it was far worse.

In 1910, her own daughter, described as a jealous and mercenary individual, was caught up in a plot to assassinate her mother.

In his book ‘Fast Ladies: Female Racing Drivers 1888 – 1970’ Jean François Bouzanquet wrote: “It was her daughter who put an end to this adventurous life.

“She had been trying for a long time to extort money from her famous mother. By the skin of her teeth, Camille escaped an assassination attempt, instigated by her daughter’s ruffian friends, at her home in the middle of the night.

“She confronted them and they turned tail and fled. Faced with a daughter who had deceived her, nothing was ever the same for Camille.”

After that Camille devoted her life to charitable work with animals, disadvantaged women and orphans and helping the French Government’s work in Morocco.

In 1906, she visited Morocco and explored it extensively on horseback.

In her 1909 book ‘Ce que m’a dit le Rogui’ (What El Rogui told me), Camille describes unconventional modes of travel and the dangerous nature of the area.

‘Je sais tout’ printed part of the stories in 1909, describing how she “adventured alone to Morocco, that country infested with brigands, and full of dangers for Europeans and especially for the French.”

Camille was also a lover of animals and became president of the ‘Société protectrice des animaux’ (SPA), from 1910 until she died.

She started her charity work at the Paris refuge for stray and injured dogs, originally founded by Gordon Bennett in 1903, and by 1927 was using her own funds to modernise and enlarge the Gennevilliers animal shelter.

While Camille organised many protests against bullfighting, she was also Vice-president of the Ligue Française du Droit des Femmes — or the French League for the Rights of Women.

She continued to provide health-care to disadvantaged women and children in German-occupied Paris, until her death in 1942.

She was interred in the Crespin family tomb in the Parisian Père Lachaise Cemetery.

She had been honoured by the Government as early as 1929 when the rue Crespin, in the Paris district of Ménilmontant, was amended to be the ‘rue Crespin du Gast.’

A monument was erected and her name was further given to the technical school at Chalon-sur-Saône, the ‘Lycée professionnel des métiers de l’automobile Camille du Gast’.

Above all, Camille du Gast remained a lady.

As part of her socialising, politicising and fundraising, Camille would give piano and singing recitals. She was notably accomplished at both.

She cared deeply for her fellows and did as much practical work as she did monetary giving.

It is the fund raising and welfare work which for which she is best remembered, but her skills in sports and motor racing did much to challenge the thinking of male superiority in the earliest days of the women’s rights movements.